Last Sunday Michael and I went out to dinner at Apizza Scholl’s. It was going to be our “yay the February challenge is over” meal but I’d ended the challenge about three days short of the full month. Even though I was back to eating dairy and gluten, I still didn’t eat very much of it. Naturally I just kept eating the way I’d been eating for the February challenge, just with some real chocolate for dessert. 🙂 I think knowing that I COULD eat dairy and gluten again, made it easier NOT to.

Michael felt a very real difference when he cut out gluten from his diet. Like I said in previous posts, he wasn’t snoring as much, his throat didn’t feel swollen and he generally just felt better not eating gluten. It was something he was considering cutting out of his diet long term. Even though I didn’t feel any different cutting out gluten and dairy, I don’t have a problem supporting him by reducing and/or eliminating gluten. I didn’t miss bread or pasta, really, so I don’t mind not eating it long term.

Michael wanted to go to Apizza Scholl’s to test out eating gluten after a month of abstaining. Their pizza is our favorite in Portland and the crust is definitely not GF. We went there for dinner to test out how he’d feel after eating a bunch of gluten. 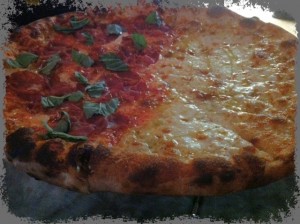 I have to admit, I kinda missed pizza after refraining from bread products for a month! We got half Margarita with spicy pepperoni on it and half truffle oil cheese pizza (my favorite–which is weird because I hate mushrooms). It was fantastic.

Sadly, a few hours after eating the pizza, Michael said his stomach was bothering him. He didn’t want to give me details, obviously, but this is the first time since the gluten-free thing that he’s complained of stomach issues from food. I feel badly for him because I know he was hoping that the pizza would be ok to eat. 🙁

On a more positive note, earlier in the day, I did some baking! 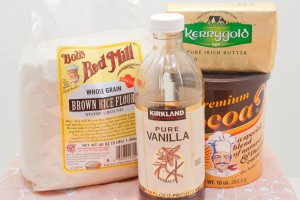 Michael had been asking me for days to make gluten-free brownies for him. I looked around for a recipe that had ingredients I recognized (and not a bunch of weird stuff I couldn’t pronounce, let alone FIND in a grocery store) and found this recipe. It seemed simple enough.

I turned on my Lisa Loeb Pandora station (no shame here!) and got to bakin’! I made the substitute of using the Splenda blend of sugar that I usually use when baking anything. Using the Splenda blend saved me between 25-50 calories each brownie. I also used Brown Rice Flour because that’s all I could find at my grocery store. I was surprised at how many eggs were required for this recipe. Other than that, I liked the recipe because it was simple and didn’t have odd ingredients in it.

I’m new to all this gluten free cooking/baking. I found a really helpful blog that explains all the differences between the gluten free options. Definitely check it out if you want to learn more about it. In her “Guide to Working with Gluten Free Flours” she explained that gluten free bread is never going to be light and airy like regular bread is and you just have to get over that. I think that might have been my issue with the gluten free thing–I kept EXPECTING it to be the same flavors and textures and it just wasn’t. 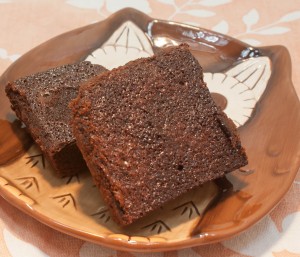 So how did they taste? They tasted pretty good. The texture was definitely different than what you are expecting. It’s not the same as a fluffy, moist, thick brownie that you’d make with flour. It was dense, almost cake-like, and reminded me of like sponge cake or maybe coffee cake? It wasn’t bad, just different. I’d also added a handful of chocolate chips to the batter and that definitely made a difference! There were bites of the brownie that had oozing chocolate from the melted chips. I’d make this recipe again and I would add more chocolate chips, or maybe even butterscotch chips to it.

Depending on how big you cut the pieces and if you use real sugar instead of the Splenda blend, the calories can range between 150-200. I cut 12 pieces out of the brownie pan, some slightly smaller than others, so if you make this and cut them all the same size you’d get about 10 pieces. 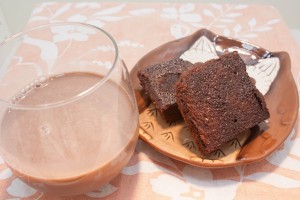 Michael and I ate our brownies with a glass of chocolate almond milk. It was a nice treat while we snuggled on the couch with Fat Kitty and a movie. Look at him! He stretched out on Michael and pretty much stretched the length of his legs. 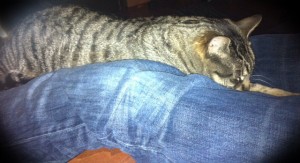 It was a really nice weekend. I’m disappointed that Michael had a negative experience eating gluten again. He woke up Monday was still having issues from eating the pizza the night before. Now the experimenting starts for him. He’s going to try eating little bits of gluten in moderation to see how much he can eat before he feels the effects. And we may be attempting to make our own gluten free pizza at home very soon…

I still feel absolutely no difference eating bread again. The pizza from Apizza Scholls didn’t make me feel bad, the next day I still felt ok. I even had a bagel thin for breakfast and still didn’t feel any difference. My official conclusion: no food sensitivities! Time will tell what exactly Michael is sensitive to.