I take two rest days a week no matter what and I usually split them up to give my body a rest. I instituted this rule years ago, probably 5 now, and it’s stuck. I’ve found that splitting my rest days works best for my body. Doing some kind of fitness 2 or 3 days in a row, then rest, is a good reset for me mentally and physically. It’s shocking how often I see on blogs that people don’t take any rest days. It’s an important part of fitness and weight loss!

Last week I apparently needed more days off. Usually I don’t take a big chunk of time off from working out unless I’ve come down with a nasty cold that has me on the couch. But last week when we got back from Mount Hood I went swimming once and then decided to take the next three days off. Mentally I didn’t want to go to the gym or do any activity at all. Physically I probably could have but decided to just rest. I’m really glad I did it. It was just the reset I needed.

I suppose I had been feeling burned out lately and wishing I could take a break. So for three days in a row, I came straight home after work and either watched TV or read books. It was nice! Friday after work I went swimming and my body felt strong and relaxed and I was fast in the pool. Saturday morning I hit the gym feeling refreshed and excited to lift weights instead of feeling like it was a chore.

Saturday I also switched my workout around. It may seem silly but something as simple as that made all the difference. Instead of doing cardio first–which is what I always do–I did my body pump weight lifting exercises first. I spent 45 minutes doing that and felt really strong. I finished up with about 15 minutes of the elliptical, stretched, and called it a day. 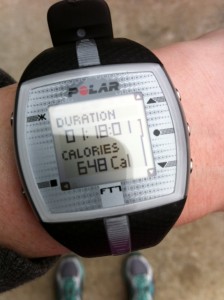 After the gym I met my friend Erika for lunch. We went to Noho’s Hawaiian cafe. It’s a restaurant I’ve wanted to try for years and just never did. It’s in a cute area in SE Portland and it was such a nice day out, Erika and I walked there from her house. 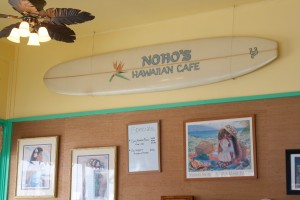 I ordered the Hot and Spicy Teriyaki Chicken. It was sweet, with a little bite and had sauteed cabbage and onions mixed in. It came with macaroni salad and rice. What I liked is that you can choose the sizes of your entrees:

I wish more restaurants did that! I like it when I can have the option if a normal portion size. 🙂 I ended up getting my lunch as “regular” because I wanted to have leftovers for Sunday’s lunch. It was a big plate of food. I ate about 1/3 of the chicken, all of the macaroni salad and one of the rice scoops. I ended up getting two more meals out of the leftovers–Sunday I had the rest of the rice and half of the chicken and Monday I took the rest of the chicken to work with a salad for lunch. 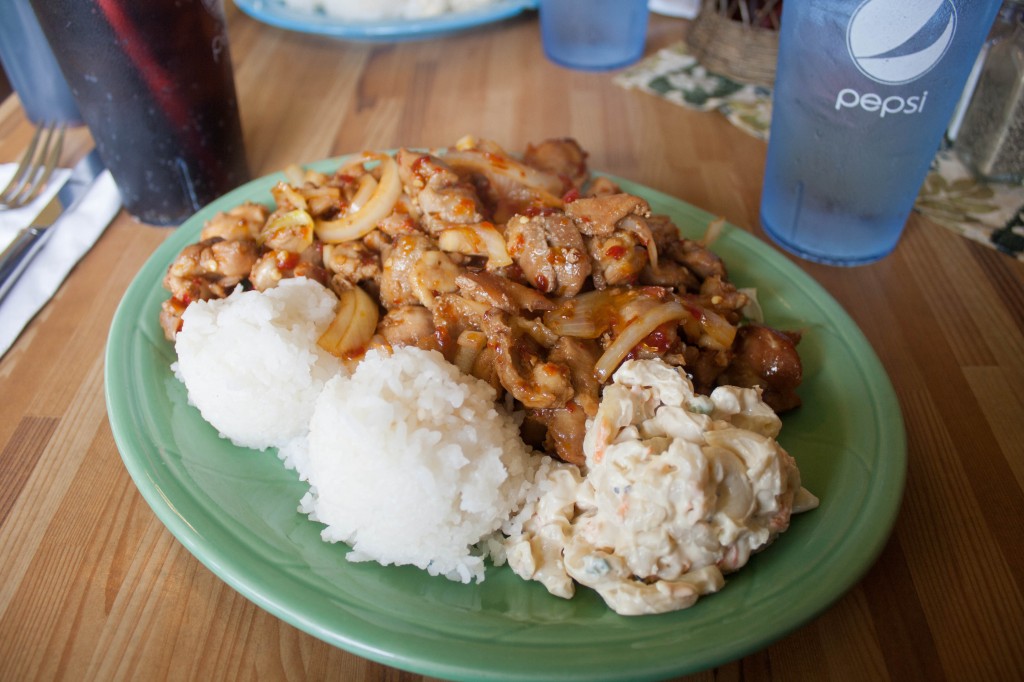 I don’t know that it was “authentic” Hawaiian food but it was definitely delicious. We gabbed for a few hours and then I went home and laid on the couch with a book for pretty much the rest of the night. I’d gotten a huge stack of library books (why is it that the ones I put holds on ALWAYS come at the same time?!?!) and was working my way through them. Fat Kitty snuggled with me, I had a cup of tea and read this shocking book:

It was a scary and fascinating read and I finished the book in one night. Michael watched sports while building a computer and I spent pretty much the whole night on the couch reading. Fat Kitty was super intrigued by the mouse on the computer screen! 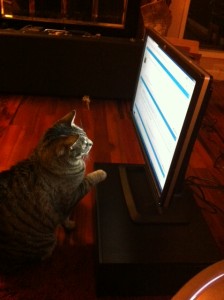 By the time it was 7pm, I still wasn’t super hungry for dinner because lunch had been so filling. I had a small snack of leftovers and some of Michael’s popcorn and called that dinner. One thing that will definitely stick around is the new way of having popcorn: with just nutritional yeast sprinkled on top instead of butter. I did that in February for my dairy-free challenge and liked it so much that that’s how I want my popcorn now!

We also bought some kale and spinach to plant in the next week or so. It’s much earlier than we normally plant but since the lettuce and spinach bolt really quickly we want to try and lengthen the season we can grow it. It will definitely be an experiment to see if the slugs and rain totally demolish the plants before we can even get some crop!

QUESTION: How many rest days do you fit into your schedule? 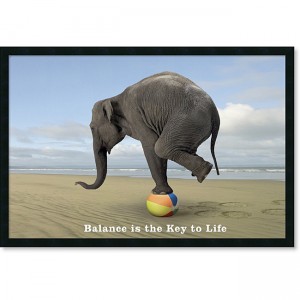 B is for Balance.

Being successful in weight loss and maintenance means being balanced in all ways.

Sometimes I feel like I’m walking a tightrope in terms of maintenance. While going Scale-free this past summer taught me that what I was doing worked, I still sometimes feel like if I slip up I will start to gain the weight back. It feels like I’m balancing on a tightrope; if I make one small misstep (like skipping workouts or eating bad foods) it will be a big fall.

“Food is an important part of a balanced diet.” – Fran Lebowitz

What I’ve learned about balance falls into my 90/10 Rule for maintenance. To me it means that making the right choices 90% of the time makes it possible for me to enjoy splurges 10% of the time. That can be broken down in anyway I want. I could work hard making good food choices and then splurge on a fancy meal at a nice restaurant, or it means I can have a treat a few times a week (chocolate is a good choice). 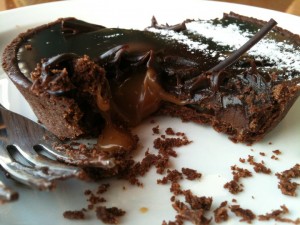 This does not mean going nuts orpunishing myself for eating “bad” food.

Balance also means living an active life that is balanced. This means REST DAYS. Working out every single day for hours is not healthy for anyone. The body needs rest days to heal, repair, recover from the activities we do. I take 2 rest days a week. Once in awhile I’ll skip one rest day but it’s not very often.

Balance in fitness also means doing a variety of activities. When I first got the Running Bug I wanted to run all the time. The more I ran, the more I loved the runner’s high. I chased it, I craved it. I ran for fitness, I ran to challenge myself, I ran to train for races. I neglected most other activities except for swimming. I hated weight lifting, I grew impatient with yoga. I swam and I ran. It took a running injury to remind me that being an athletic, fit person means living a life in balance. That means not overusing my body with one activity. That means doing a variety of activities. That means lifting weights to balance out my body.

Speaking of weight lifting…when I first started I didn’t really have a plan or goal in mind. I just needed an activity to keep me active while I couldn’t run. I started to see changes in my body immediately and grew to love it. During one weight lifting session with my dad over the holidays he gave me a valuable piece of advice: Balance whatever you lift. He explained that if I work my chest, I should work my back. If I work on my biceps, I need to do my triceps. Neglecting any part of the body can cause imbalance and that leads to INJURY.

Imbalance is easy for me to spot in myself…

Imbalance in my fitness activities usually lead to injuries, soreness, pain I can’t explain. Sometimes all it takes is a few extra Rest Days or I hit a yoga class.

Imbalance in my eating is obvious too. My pants feel tighter. My skin breaks out. I feel gross (a good example is when I fall back into the habit of drinking diet sodas…this makes me feel gross).

Imbalance in my mind shows me that I need to rest because I get irritable, or I dread going to the gym. That means I haven’t taken a much needed break lately, or I’ve been going-going-going with no down time. An easy fix? Movie night. Girl’s night. Sleeping in and being lazy!

How I Stay Balanced

I count my calories. I drink water. I drink wine on occasion. I eat my veggies every single day. I eat treats when I want them. I workout. I rest. I prioritize things in my life–health, relationships, family, sleep, pets. All the rest of the “crap” out there doesn’t really matter. Prioritize.

QUESTION: Are you living a balanced life? Or do you feel like some parts of it are imbalanced?