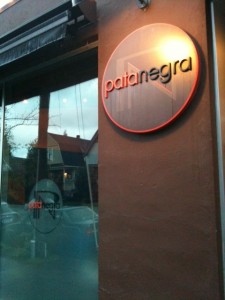 Thursday night was a long overdue Date Night for us. While I had a great time on vacation and it was nice spending time with my family, Michael and I never really had any alone time in Arizona. 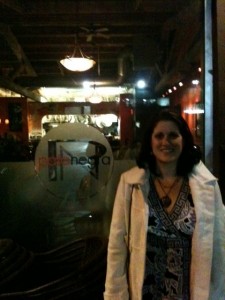 I bought the Groupon for Patanegra and I made reservations. I hadn’t heard of this local restaurant before but when I saw their tapas menu I was sold! 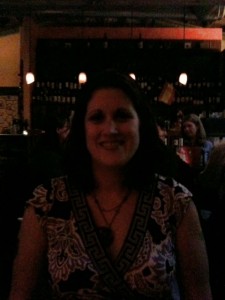 Sorry the photos are so dark. It was a very romantic restaurant with dim lighting. The restaurant itself was very cool: rustic and industrial at the same time. The ceiling was exposed beams with track lighting. 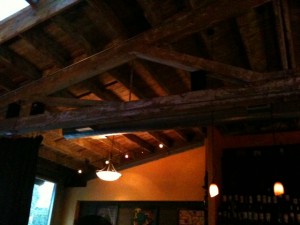 The kitchen was visible from the dining area. The place was completely packed. Luckily we had reservations. The restaurant was also a bit loud and not as intimate as I would have liked. 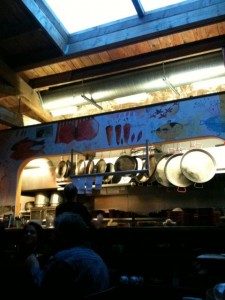 The only complaint I have about Patanegra was that the service was insanely slow. We were seated and it took about 20 minutes because a waiter came and even gave us water or took a drink order. Yes the place was packed but seriously, they need to hire at least one more waiter if it’s going to be that busy on a Thursday night. I shudder to think how slow the service would be on a Friday night! 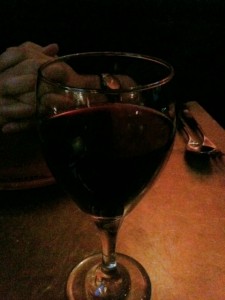 I had one glass of a nice red wine. It was just their house Rioja but I enjoyed it. (I would have ordered a second glass had the waiter ever made it to our table!) 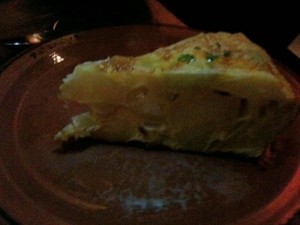 We ordered five tapas to share. The first was Tortilla Espanola: “Spain’s Most Famous Tapa.” It’s basically a cold quiche with eggs and potatoes. It was just okay. 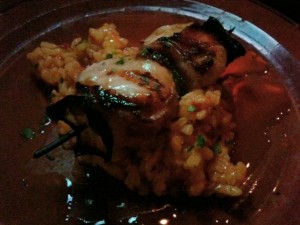 Next was the Vieiras a la Parilla: grilled scallops wrapped in serrano ham on some delicious rice. This was my second favorite dish of the night. The scallops were absolutely perfect: they were soft and melted in my mouth. The ham was smokey and salty. 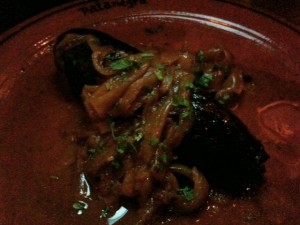 Morcilla: spanish morcilla sausage with sweet oloroso and caramelized onions. It was a delightful surprise. The sausage was black–a tad disconcerting but we split it and both loved it. The sausage was soft and salty and the sweet onions were a lovely combination. 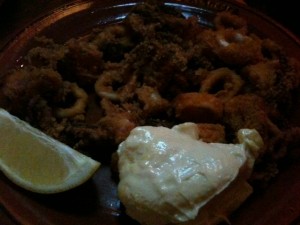 The calamari was crunchy and flavorful. Calamares Fritos: deep fried calamari rings with alioli. The alioli was garlicky and the lemon complimented the whole dish. They had the traditional calamari rings plus the little tiny squids–they creeped me out. I ate one but it was hard to dissociate from the image of a tiny squid. It was like a deep-fried spider. Eeew! 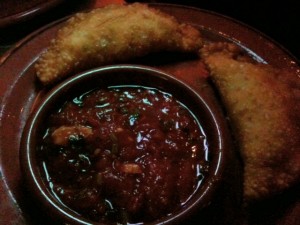 And the star of the night: The Empanadas! Empanada del Día: turn-over of the day with spicy sofrito.  The Empanada of the day was filled with Mexican cheese, ham, beans and onions. It was amazing. The salsa was spicy and sweet at the same time. The combination was a winner and I immediately said “I wish we had four more of these.” The empanada was crunchy and melted in my mouth. If I go back to Patanegra I would order these again! 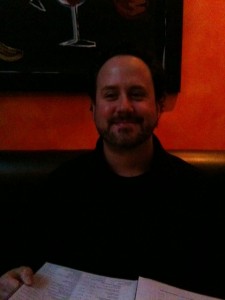 Half way through the meal I wanted to try a different glass of wine to go with dinner. Like I said, the waiter was non-existent so Michael suggested we skip the second glass of wine and get dessert instead. My arm was twisted. 😉 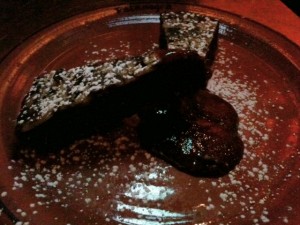 Flourless chocolate cake with raspberry sauce. It had nuts in it and a crunchy topping (not sure what it was–white chocolate maybe?). It was dense and the flavor was very mild.

It was a really nice night. I enjoyed spending time out with Michael and I got to wear my new dress. The tapas were the perfect sizes too. I didn’t leave feeling like I’d overindulged in a bunch of food.

I enjoyed the food and would like to go back but the slow service makes me pause. I wasn’t in a hurry to eat and leave, but I do like having a waiter that is a little more attentive.

How to Lose Weight – Week Four Check In

How did you do with Week Four? Your tasks for this week revolved around food.

What was it like recording all your food? Was it eye-opening? Did you immediately notice things you could change?

Seeing my calories in black and white is a great barometer for how I’m doing. I can tell when I’m slipping into bad habits and when it’s time to reign it in. Having that accountability is how I’ve kept the weight off.

QUESTION: What was the hardest thing about trying to lose weight this week?

How to Lose Weight – Week Two Check In

How was this week? This week’s challenges may have been more difficult. 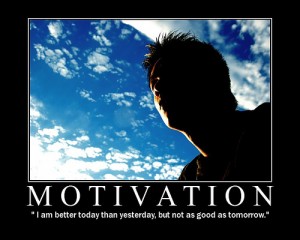 Getting rid of the all the junk food in the house was probably the hardest part of this week’s checklist. I for one hate wasting food. I don’t know why it drives me nuts to throw food away, or waste money, but it really does. Hopefully you were able to get over that hurdle and get the temptations out of your house.

You can read Week One to catch up. Here’s a quick recap:

Step One – Measure Your Body and Weigh In

Step Three – Get a Journal 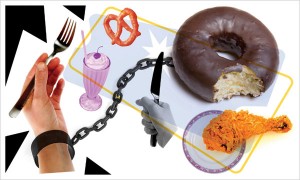 This week we did a few crucial things:

Step One – Remove All Junk Food From the House

I don’t expect many people to comment on this ongoing series. It’s more of just a way for me to answer a lot of the common “How do I start?” questions. The basic concept of losing weight: burn more calories than you eat. While that can be something super simple to understand logically, emotionally it’s difficult. It’s easy to get overwhelmed with the entire task of losing a lot of weight.

One reason it’s harder to DO than it is to KNOW is because our bodies need food. No matter what. We have to eat. It’s not like we can just stop eating and lose weight like an alcoholic would just stop drinking. Plus as Americans we live in a nation of excess and moderation is not something that is very common. I used to think that a restaurant portion was a portion. What a difference awareness makes! Holy cow! Was I wrong!

So I will continue this series because I know that someone, somewhere, will appreciate it. Maybe they’ll read the steps and something with click for them like it “clicked” for me.

QUESTION: What was the most difficult challenge this week? How did you do with the other steps?

Check back in on Monday for Week Three. 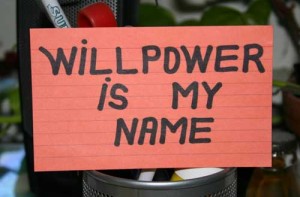 Recently I read an article about how Gorillas living in captivity are prone to heart disease. The gorillas, specifically Western lowland gorillas, were dying prematurely from heart related diseases. 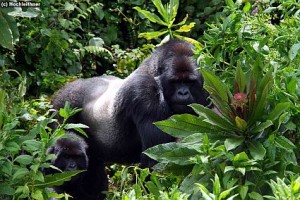 The article went on to talk about how two male gorillas have lost 65 pounds by eating a diet of endive, romaine lettuce, green beans, alfalfa hay, dandelion greens, flax seeds and multivitamins. They eat about 10 pounds of this green leafy salad every day. Compare that to their previous diet: on their old sugary, starchy diet they were overweight and less mobile. 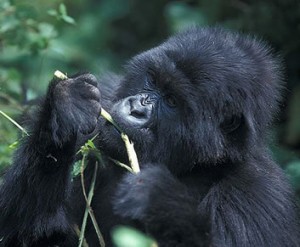 Animals are so smart. They just intuitively know.

What I find the most interesting is that they are basically describing a raw food or vegan diet in a way. I don’t have any experience with a vegan diet. I was a vegetarian for about 12 years (and did everything wrong). While I’m a full-fledged meat eater now I’m fascinated by this topic. Maybe because in a way I am attracted to whole food diets. The more that Michael and I Meal Plan and eat healthier meals, the  less processed foods I want to eat.

I’ve noticed that I feel better since the Meal Planning. We’ve both also lost some weight. I am listening to my body even more and I see what types of food fills me up the most: protein and fiber. It’s great seeing the correlation and progress.

QUESTION: Are you vegan? Or do you eat a raw diet? Thoughts?