Our original plan for Date Night was the OMSI After Dark Halloween edition. It turned out it was about three times the normal cost of OMSI After Dark so we decided to pass. Instead, I whipped out my Groupon coupons and planned an alternative evening. 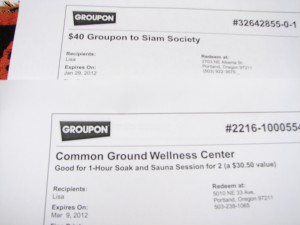 The first stop was the Siam Society on NE Alberta. It’s a Thai restaurant that I haven’t been to in ages, but remembered liking. 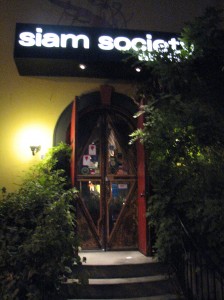 It was a cool, warehouse-type building with exposed cement walls and floors and dim lighting. The music was trendy, quiet trance and mood music. We were seated in a romantic corner of the restaurant and I ordered a glass of Sokol Blosser Pinot Gris wine. Pinot Gris goes well with spicy Thai food. 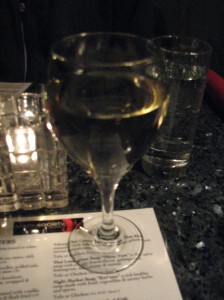 We had $40 to spend on dinner. Michael wanted the  Pulled Pork Spring Rolls. (I kinda wanted the spicy green beans but we got this instead.) The spring rolls came with braised pork and wrapped with hazelnuts and vegetables. The dipping sauce was very sweet–maybe plum sauce? 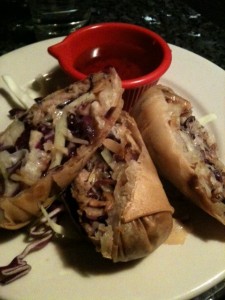 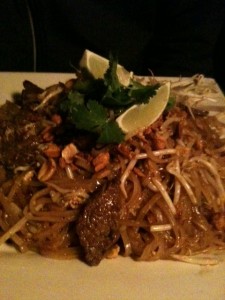 Pad Thai is kind of a must-have when I go to a Thai restaurant. I also order the Yellow Curry dish. It came with lots of veggie including green beans, potatoes and squash and flavorful spices (coriander, tumeric, cumin and curry). I put the jasmine rice into the dish to soak up some of the sauce. I loved the yellow curry dish. 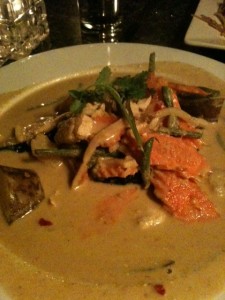 I ate way too much, yet we barely made a dent in the amount of food on the plate! The “After” shot looked oddly just like the above shot. I love having leftovers for lunch! We had some time to kill before our next destination so we stopped next door to get a treat. 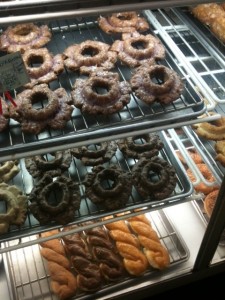 Michael got a donut and I decided I just wanted two donut holes. I was honestly too stuffed from dinner. 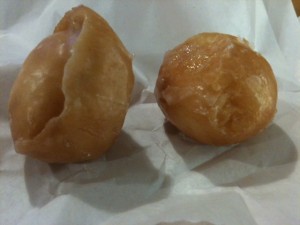 It was the perfect, small treat.

After dinner we drove to the nearby Common Ground Wellness Center. You might remember me writing about it at the beginning of this year. I bought the Groupon last time for Michael’s birthday to help his back injury. Well he recently hurt his back again so I made us reservations for the center again. 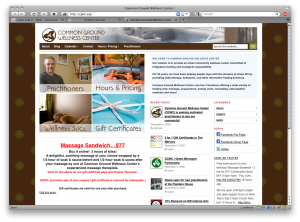 There’s no photography or phones allowed in the center, which is fine with me! An hour to completely disconnect sounds good to me. 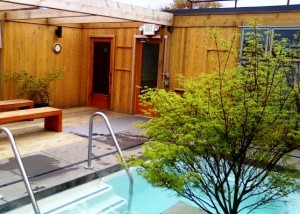 This time I brought my new bikini! Yep, the one I bought over the summer and only wore in my backyard. I figured this was the perfect time to take it out. It was so liberating being able to wear it.

The night was dark and frigid. The patio was dark and only lit by Christmas lights. The steam rose from the hot tub and made it hard to see. It was romantic and relaxing. I laid back in the hot salt water and chilled. It felt amazing.

QUESTION: How often do you do Date Night with your partner? What do you do?

They were sore and tight and angry on Thursday. Apparently doing a bunch of squats and lunges will do it. 😉 You would think I’ve learned my lesson. Nah, never. I was skeptical about whether or not I could bike to work on Friday because my hamstrings were so sore. I did lots of stretching, foam rolled, Icy-Hotted my legs and used my heating pad. Friday morning I woke up good enough to bike. 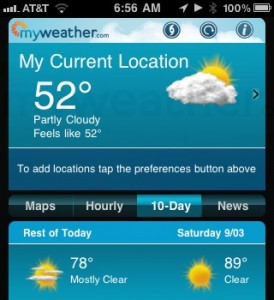 52 degrees was stretching it. I think it was less than that! It was downright frigid. I wore my warm cycling clothes and set out. I could almost see my breath. For the first two miles I was freezing. The wind was cold. My toes were frozen. I was wearing my warm cycling gloves but still a bit cold. The wind was so cold that my eyes were watering and tears were streaming down my face. I was thinking, “Damn this is cold!”  and “I need Shelby to draw me an awesome picture of how brutally cold this is!” 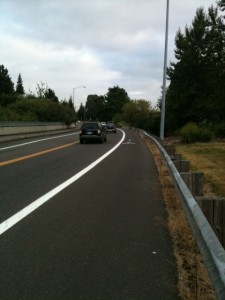 After about five miles I stopped and took my warm gloves off and swapped them with my regular gloves. It was still cold but not uncomfortable anymore. I was warming up quite nicely. 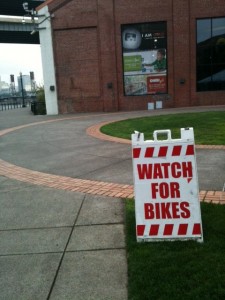 I made up some time on the Springwater Trail. The wind was at my back for a change and I was able to speed along. I passed OMSI and was coming to a decision point. I was running late (I had left the house about 10 minutes later than I had planned) and had to decide if I take a shortcut across the Hawthorne Bridge, or do my normal route. I checked the time and I had enough time to do the full route. 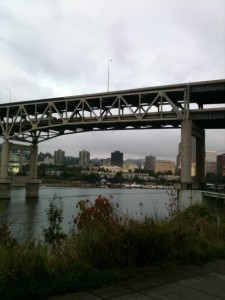 I biked across the Steel Bridge, passed all the homeless sleeping and waking-and-baking. Then I saw this: 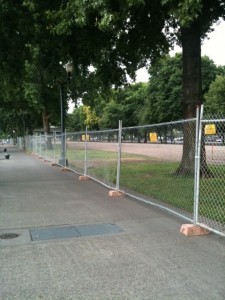 BLAST!!!!! I was trapped. The whole waterfront was locked in with the fence. I needed to cut over to the other road and I was blocked. I biked down the waterfront out of my way until I finally found an opening. I double-backed to get to the road I wanted and headed to work. 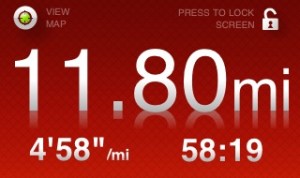 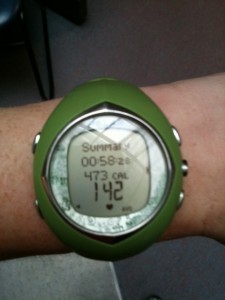 It felt VERY weird to bike to work on a Friday. Friday is my swim day. Always. It sucks that I don’t have the gym membership anymore, simply because of the pool. 🙁

It felt so strange to get on my bike at the end of the day and bike home instead of hurrying to the pool. I miss swimming!!! 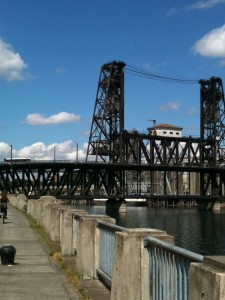 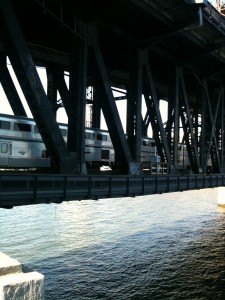 I was strong. I was confident. I didn’t feel fatigued physically or mentally. I didn’t have back pain like I often do on my bike ride home. I think the biggest factors of this were twofold: 1) Michael made adjustments on my bike seat and it’s now PERFECT and 2) I change to a different backpack that was smaller, lighter and felt a million times better on my back as I rode. The backpack even felt better having all my clothes in it (since it was Friday I couldn’t leave it all at work, I had to take it with me). I’m happy with these changes and felt like they made my bike commute much more enjoyable. 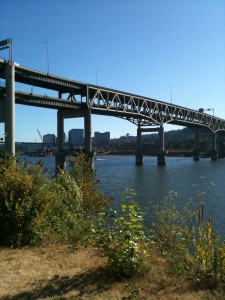 There was nothing annoying that happened on my bike ride. In fact there weren’t many people out, even though it was a Friday and about 80 degrees and gorgeous. My guess was that everyone had tried to leave town early for the long weekend! I was glad I missing the traffic jams and instead I was on my bike. The views were clear and beautiful during my ride. 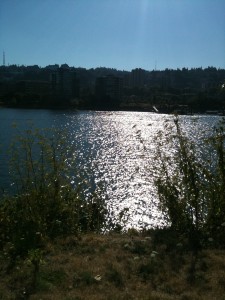 I got out of downtown, passed OMSI and passed Oaks Park and I stopped in the shade to drink some Gatorade mixed with water. If I don’t dilute it, it’s just too sweet. 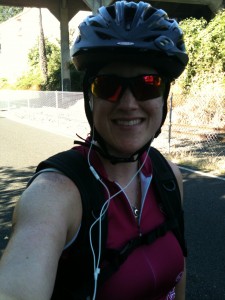 I tackled the hills with ease on my ride. Nothing was stopping me! I recovered quickly and easily and all I could think about was, “I commuted twice this week!” I felt happy and satisfied with my attempt. I biked through Sellwood and downtown Milwaukie and when it came time to do the big hill (the one I skipped last time) I was feeling energized. 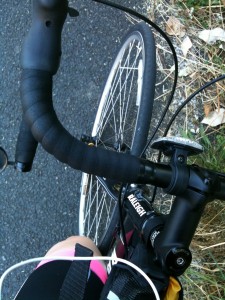 My Nike GPS app wasn’t working on my way home from work so I didn’t track my mileage. But I already know the route is about 12 miles or 12.25 miles. I got home and while I felt happy about my awesome bike ride, I was sad and starting to feel grumpy about the gym/pool situation. I know it really isn’t a big deal in the grand scheme of things but I feel a little lost without a pool. 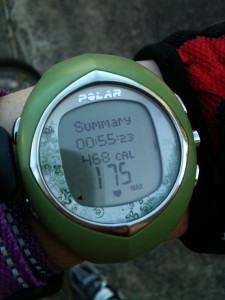 I’m pretty stoked that I shaved off 5 minutes of my ride on Friday. If I start commuting to work a lot I expect to see that number go down even more.

TOTAL DISTANCE FOR THE DAY: 24 miles

TOTAL DISTANCE FOR THE WEEK: 48!

Had I found the time to bike to work twice a week all summer long I totally could have done the full 100 miles at the Portland Century. Something to keep in mind for next year.

QUESTION: What’s something that is a MUST for you when it comes to gym shopping?