Ooooof! What a weekend! It was one of those weekends where you start Monday exhausted and feel like your “to-do” list is bigger than when the weekend started. Most of the weekend was good stuff. But it started out rocky.

I ended up staying home from work on Friday because I had to take Bella to the vet. She’d gone to doggy daycare on Thursday and her “report card” said she was crazy running puppy all day long! Which was good. She loves doggy daycare. It gives her the socialization she needs and I know she has tons of fun. I noticed that she was limping a little bit that night and I thought maybe it was because she was tired and worn out from running all day long. I decided to check in the morning. 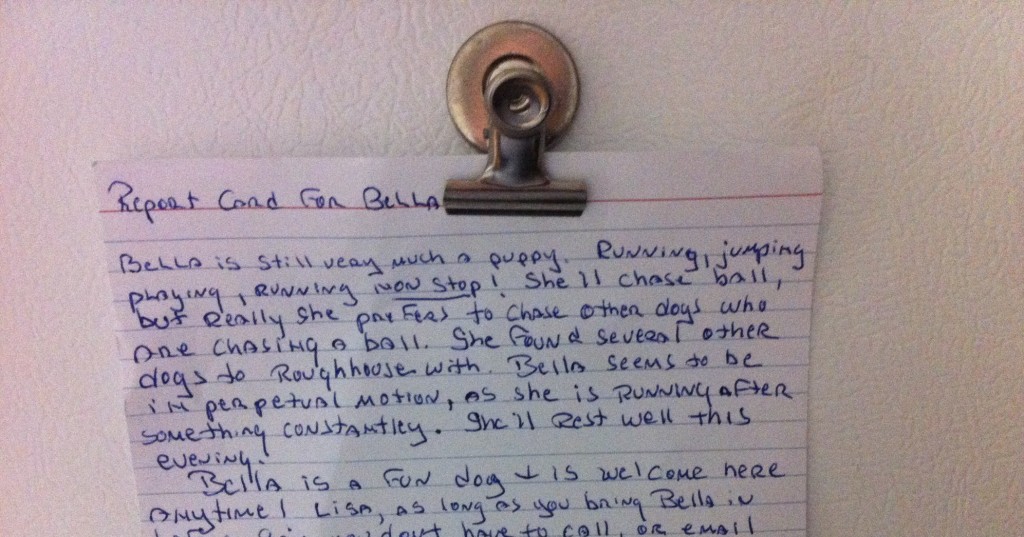 The next morning I woke up and Michael had already been up letting her out and he told me she was injured. She was really limping a lot and could barely step off the back porch. Worried, I gave her a quick exam and saw what the issue was: her back right paw was injured. The top layer of the pad had ripped and was just hanging off her foot. It was gross but not bloody or anything. So I stayed home to take her to the vet.

At this time it also started snowing in Portland. The first snow of the winter. The roads in our neighborhood were just fine. The snow was powdery and the wind moved it all around on the streets so it wasn’t even sticking. I got Bella in the car and drove two exits to the vet. It was like another world. There was tons of snow and it was sticking. Also, there was ice. I got off the freeway and went up the ramp and my car was slipping and sliding! It was NOT FUN. I hate it when it’s that slippery out! 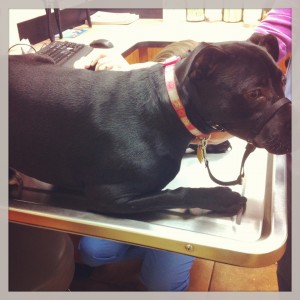 Luckily we made it to the vet (driving about 5 miles an hour down the icy road) and she got an exam. Bella has gained 9 pounds since we got her two months ago! Holy cow! She doesn’t look any bigger to us, though. She’s now 48 pounds. The vet took a look and said this was very common with puppies because their pads aren’t thick yet. It was probably a combination of the hike we did a week ago, her running around crazy in the yard on the frozen ground and doggy daycare. Somewhere along the line the pad tore or ripped and then it just got worse at doggy daycare. The vet said it was like a hangnail. They trimmed the flap, put some medicine on it and wrapped it up. Then they made plastic booties to go over it while we went outside in the snow. 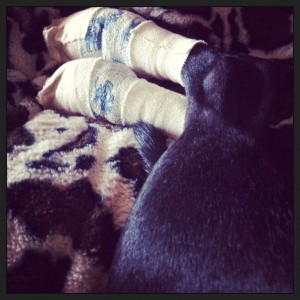 Poor Bella! We were sent home with ointment and puppy pain meds. The vet said she was not allowed to run for three weeks. I laughed and asked just how that was supposed to happen because she’s a crazy puppy! She runs all the time. But we are keeping her inside for now and she gets to go out to do her business but no playtime. Sunday I took her back to the vet for them to check her paws and she got the bandages off. Now it’s a matter of putting the special cream on her paws twice a day until it heals. 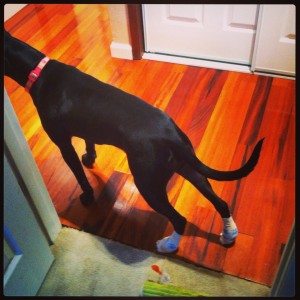 She looked pretty goofy with those booties on! And she kind of hopped around like a bunny while she was figuring out how to walk in them. In better news, Fat Kitty and Bella have been getting a long much better! We can leave the doggy gate open most of the time and Fat Kitty and Bella get up really close to each, sniff, have staring contests and then nothing. No more running or chasing. Fat Kitty still hisses at Bella on occasion but it’s kind of like a grumpy old man just complaining. He doesn’t seem scared of Bella anymore. 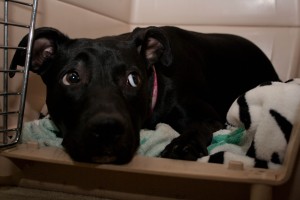 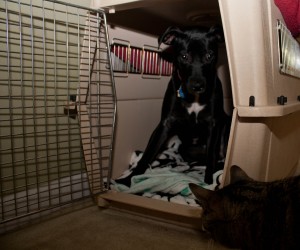 Fat Kitty also seemed very curious about Bella when she was injured . Maybe she smelled differently from her visit to the vet but he kept going up to her and sniffing her and looking at her. It was pretty funny. Something else that seems to be happening often lately is that Bella takes her toys up to Fat Kitty and drops them on the floor in front of him. I think she wants him to play. He hasn’t gotten the message yet. 😉 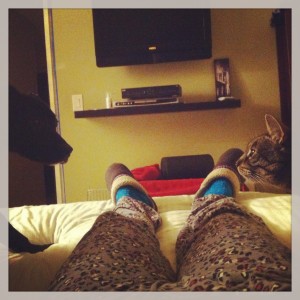 The above photo was from Friday before we went to the vet. Bella was laying on the bed with me (a one time only thing) and then Fat Kitty jumped up to defend his territory. They stared at each from either side of me and then that was it. No scuffles, no hissing, just one annoyed meow! So much progress! Bella is getting better. She got the bandages off at the vet on Sunday and they said the paws look good. She’s healing and she’s back to her normal self already.