Logan threw a Halloween Party this weekend! It was SO MUCH FUN!

The house was decked out. I might have gone a little overboard. I already had a ton of Halloween decor I’ve collected over the years and then I kind of bought a bunch of new stuff and my friend Debby gave me some decorations she didn’t need anymore!

Logan was a pirate. I was a pumpkin. Michael was a blend of Michael Myers and Jason. 😀

My parents came down to visit from Seattle. My dad got dressed up too! And Logan was trying on a bunch of different masks. At one point he was Chewbacca/Pirate. LOL

And these witches’ hats:

Everything was a huge hit! The witches’ hats were gone in seconds. The red velvet ghost cake was AMAZING!

I planned some fun games. We did a Scavenger Hunt (with prizes!). And then I hid a bunch of “ghosts” around the house and the kids had to go find them. The ghosts were small halloween toys wrapped in kleenex with a ghost face drawn on them with a sharpie. Super easy to make and it was fun.

Then we played the above game with bean bags and I had one that was a ghost “dartboard”.

Then we painted and decorated pumpkins.

The kids had a blast! I was so happy everything turned out great. It was really fun. A lot of work, but fun. I don’t know that it will be an annual event, but maybe every other year. 😉 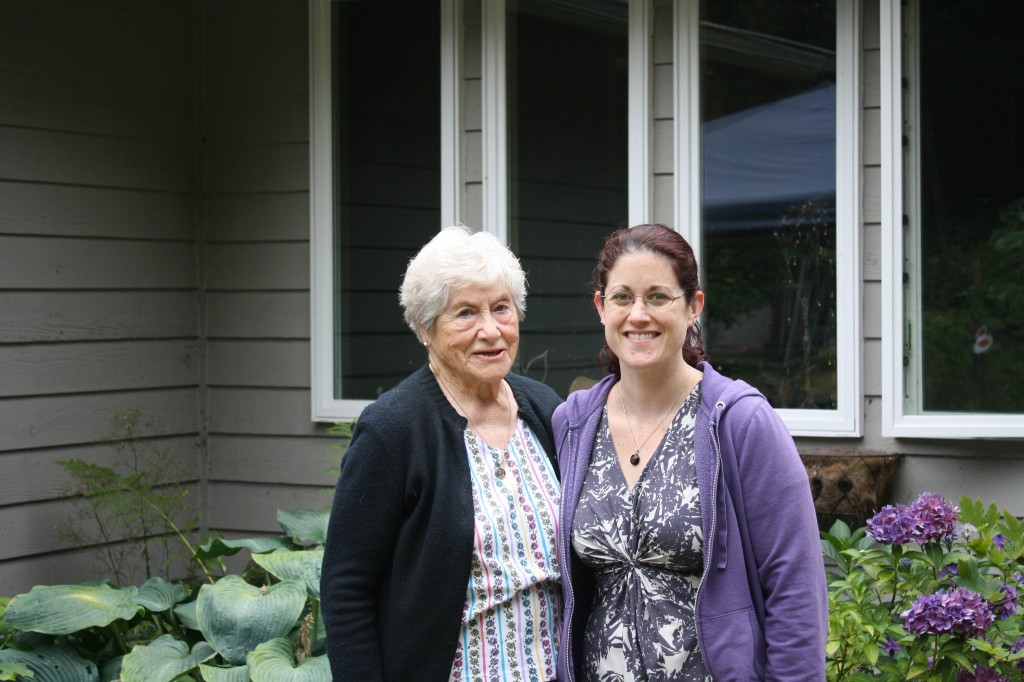 As I sit here reminiscing about my weekend at my family reunion, sweeping stray pine needles out of my suitcase, smelling campfire smoke in my sweatshirt and going through the photos, I am grateful. I’m grateful that I have such a cool and fun and close family. As a kid, I always looked forward to the big family reunion mid-summer. A weekend with the other cousins, running amok all day and going way past our bedtime playing flashlight tag and sneaking beer from the keg when the adults weren’t looking (or pretending not to see), these were the memories my childhood was built on.

Even now as an adult, I still have fond memories of all the summers we’ve had together–almost 30 years worth of family reunions (the first one started in 1984). We’re all getting older, many cousins have their own kids now, but we still have this common bond. A group memory. My favorite that we discussed this weekend was remembering the early days of the family Scavenger Hunt where we had to crawl underneath an electric fence to get to the open field where things were hidden. And of course the older cousins daring the younger one to pee on the electric fence. Aren’t kids fun?

There are a lot of changes coming up in my life. Getting married next year has created this intense feeling of inclusion and nesting. I am so happy that Michael is being brought into the (sometimes wacky and weird) fold of my family and I hope that when we have kids, they get to experience the same fun things I did as a kid. I think family is so important and I am forever shocked when I come across other people who never had that; as a kid I thought everyone’s family was like ours.

This weekend we went up to my cousin Kristin’s house for the family reunion. She lives in Poulsbo with her husband and son and they have recently started their own food cart, Bonfire Ovenworks. This is a dream that Matthew had and has made it a reality–a very delicious reality. 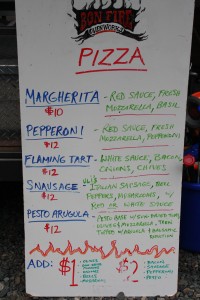 They specialize in pizza and even though they are fairly new, their pizzas are delicious! They remind me a lot of Apizza Scholls–perfect, crispy crust with that smokey flavor from the wood fire stove. 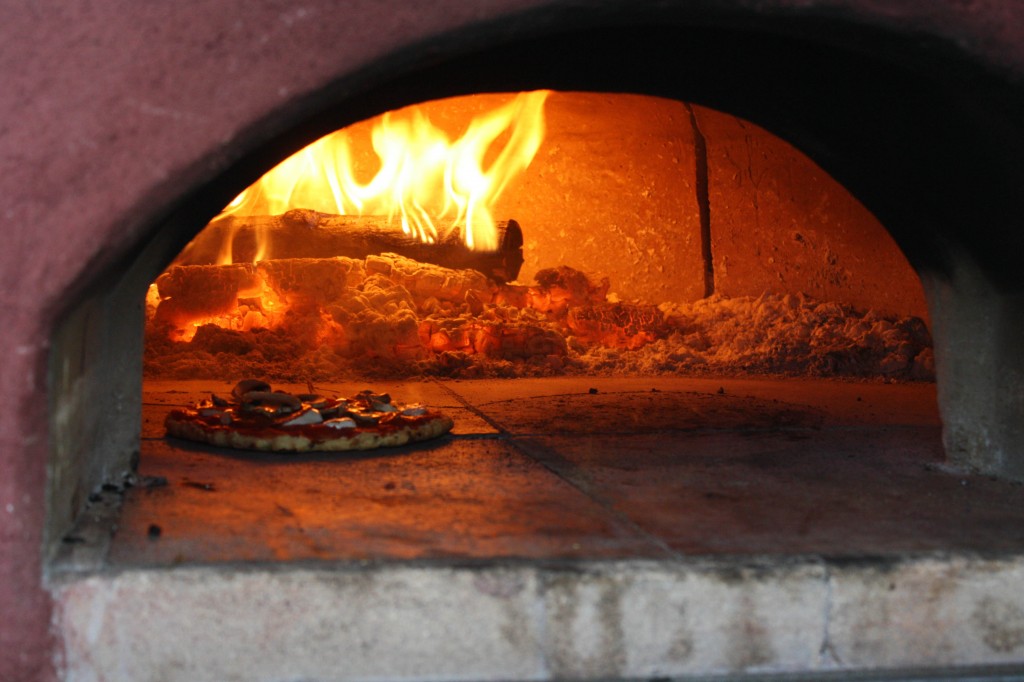 When we arrived Friday night, Matthew and Kristin were hard at work making pizzas for everyone. Their set up is super awesome and I was so impressed with the pizzas! I ate WAY TOO MUCH pizza. They made 19 pies Friday night and there were no leftovers. 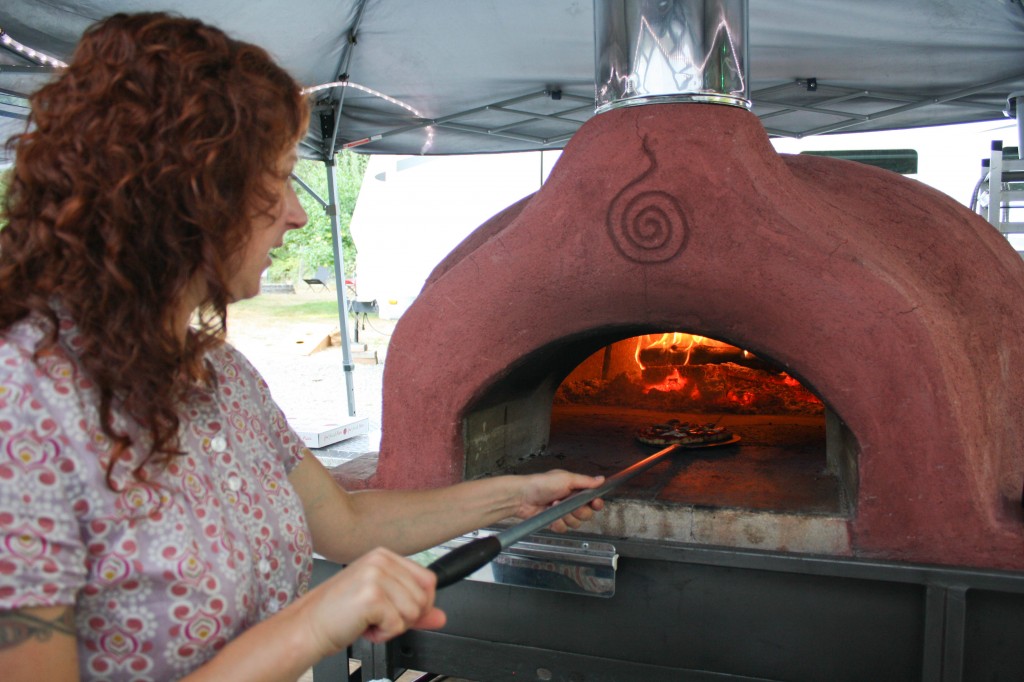 They even did a gluten free pizza for Michael, which was surprisingly good. By far, my favorite pizza was the one with arugula, sun-dried tomatoes and a balsamic reduction. I want to eat that pizza again!

Friday night we were all sitting around the campfire when we started seeing flashes of light in the night sky. A storm was coming in. Michael and I crawled into our tent and I laid there in my sleeping back listening to the rumbling thunder in the distance, the clap of lightning and then finally huge raindrops hitting the top of the tent. It was so relaxing and mesmerizing and I was lulled into a deep sleep by the rain. It was really nice. Thankfully the next day had nice weather and no more rain.

One of my favorite memories of the weekend was going for a run with my cousin Di on Saturday morning. Since my knee injury, I haven’t run outside since last September. Almost a year. I’ve gotten up to almost 1.5 miles on the treadmill at the gym so this was the first time I went outside running. Di is a super athlete, does Crossfit and used to play soccer, but she hates running so she was okay with going at my pace (thank you!). We ended up doing a little over 3 miles of run/walking. If I had to guess I’d say, 1.5 or 1.75 miles of actual running and the rest was walking. 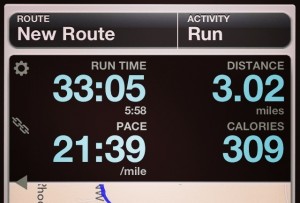 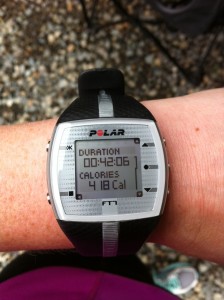 It felt so good to get out there! I didn’t have knee pain while I did it, I felt great (but sore) the next day and I think it went well!

Saturday after lunch was the annual Scavenger Hunt. My cousin Lea took over the planning from her dad (who’d done it almost 30 years) and she did a great job! She had everyone sign up into teams of 5 and then when the Scavenger Hunt began she told the boys to go on one side, girls on the other and SURPRISE that was our new teams! Two teams! Boys against girls!

The Scavenger Hunt can get pretty competitive and of course there is smack talk, even more so since it was girls against boys. One of the activities was bobbing for plums. It was hilarious. This of course turned into a water balloon fight of epic proportions. 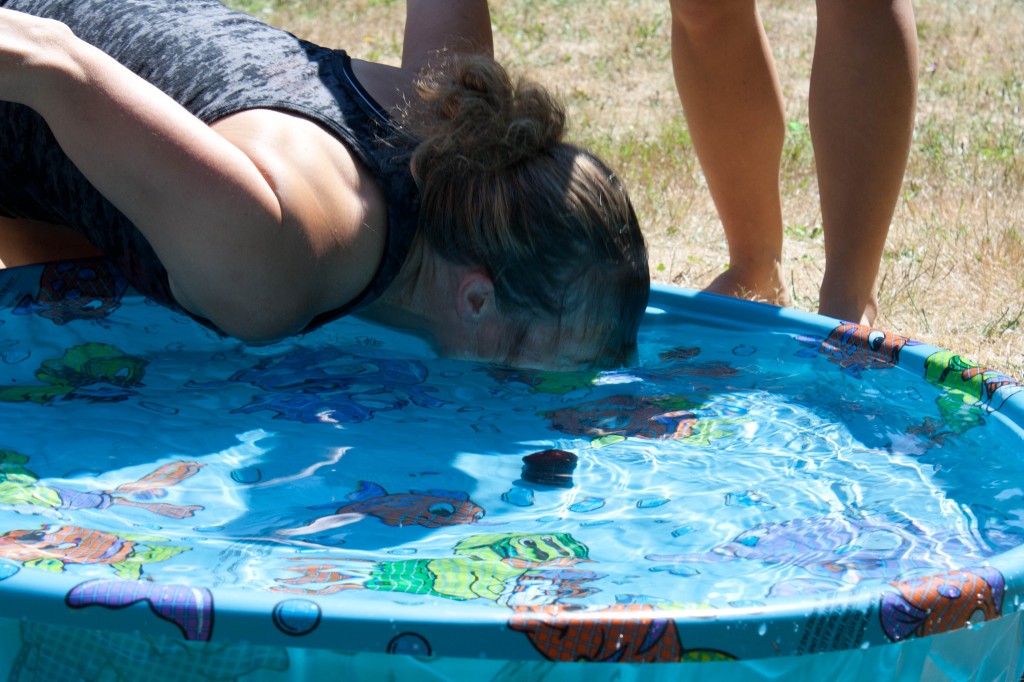 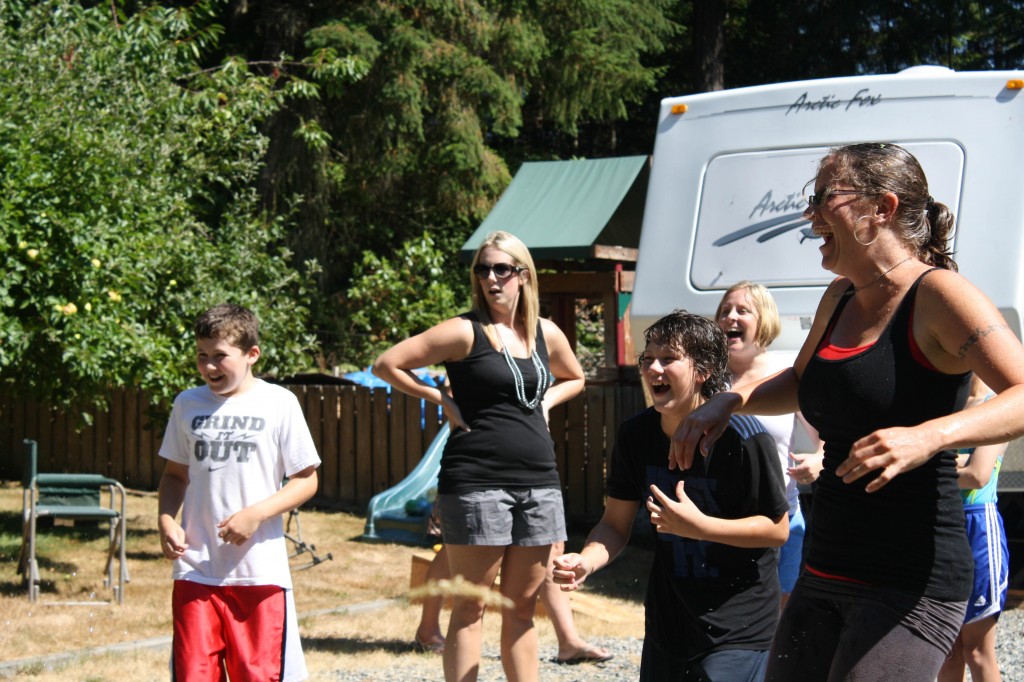 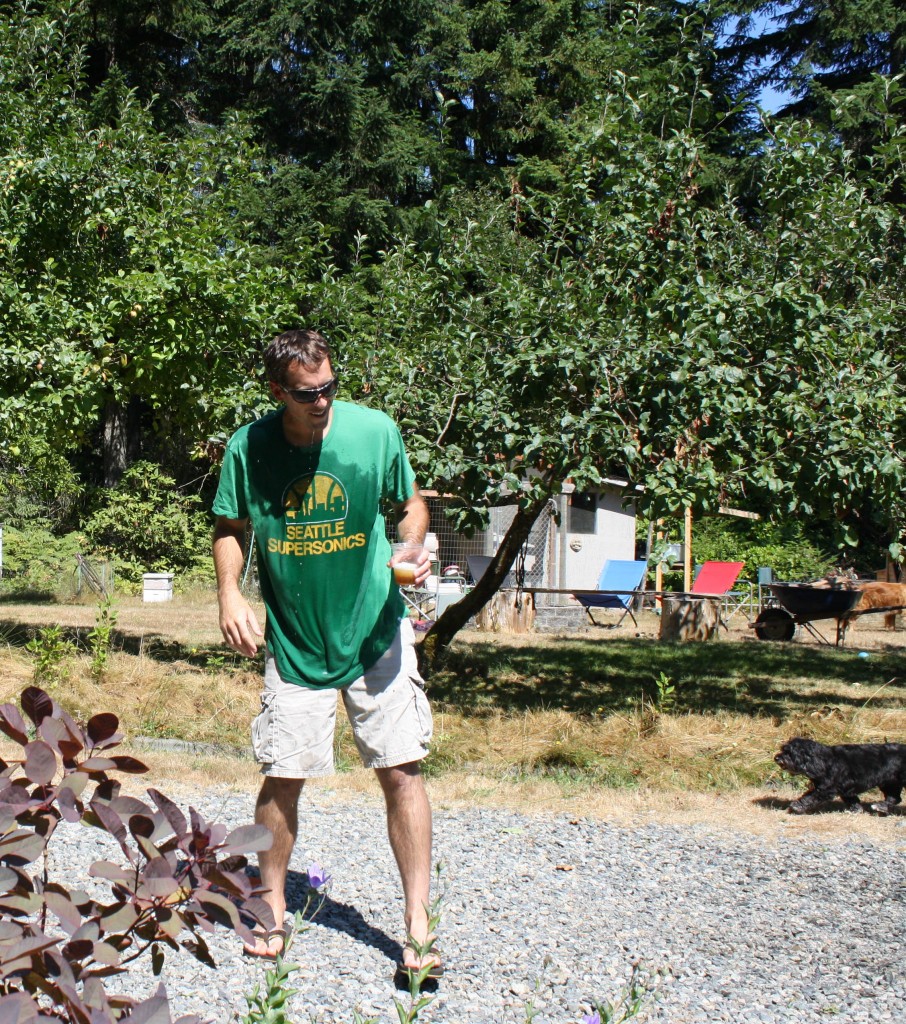 Whatever you do, don’t drop the beer. (Beer provided by Sound Brewery–I really liked their IPA!) Then the Scavenger Hunt took a hilarious turn. Our next challenge: 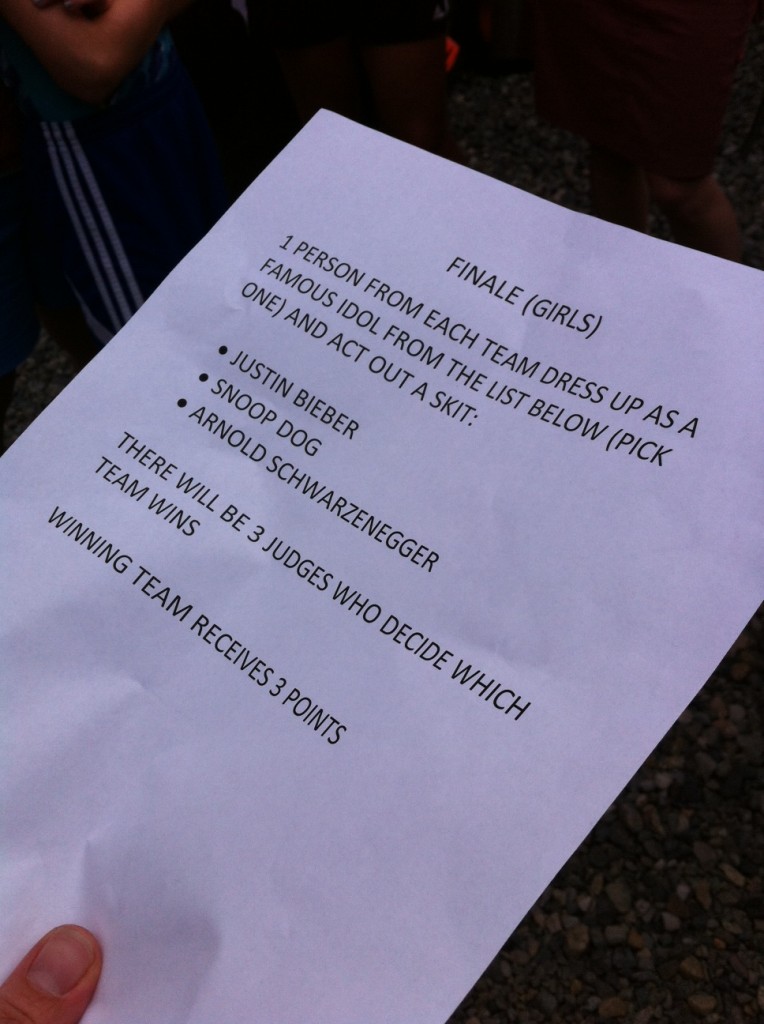 This was my favorite memory of the weekend. It was the wackiest, most hilarious thing I’ve ever seen at our family reunion! The girls chose Snoop Dog. My aunt was a GREAT sport and offered to be Snoop Dogg. We watched Gin and Juice a few times on my phone for inspiration and then set to work. She made her hair into an afro, used a mascara brush to create a goatee, put on a plaid shirt to mirror the one in the video and we made a plan. 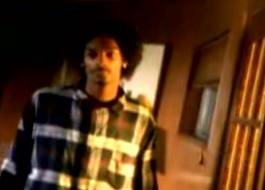 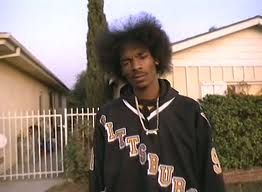 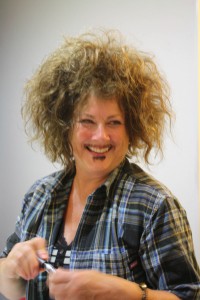 The rest of the girls got hoodies and practiced their moves as the backup dancers. My cousin turned the song on and blasted it outside and my aunt swaggered out with her bottle of gin. 😉 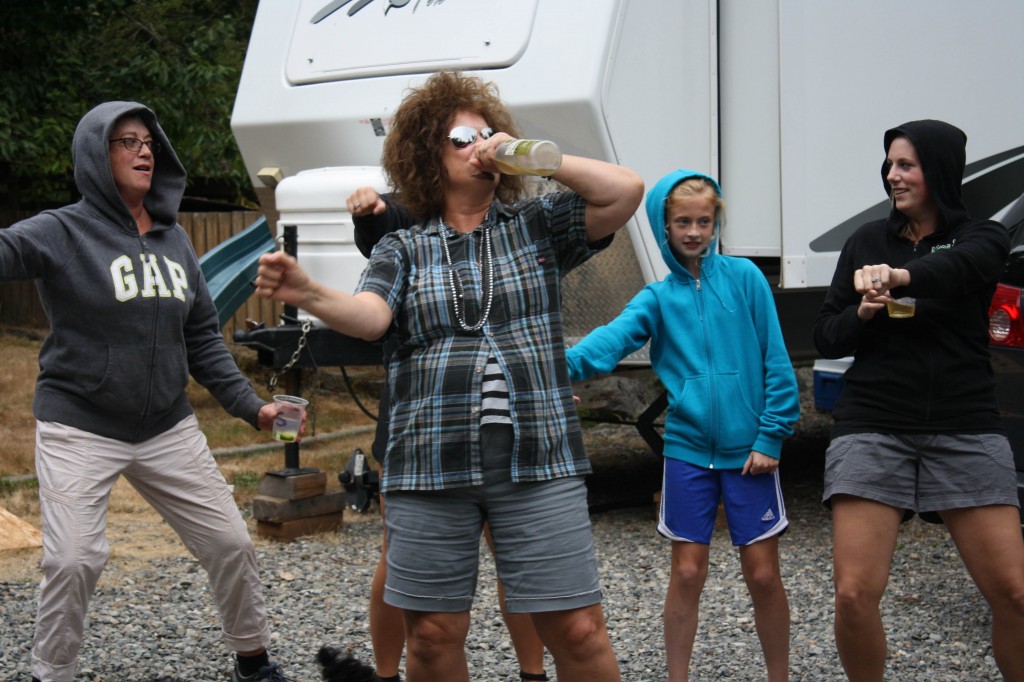 The glasses were a nice touch. And the bling. Haha! Do I even need to say that the girl’s team won the whole thing??? 😉 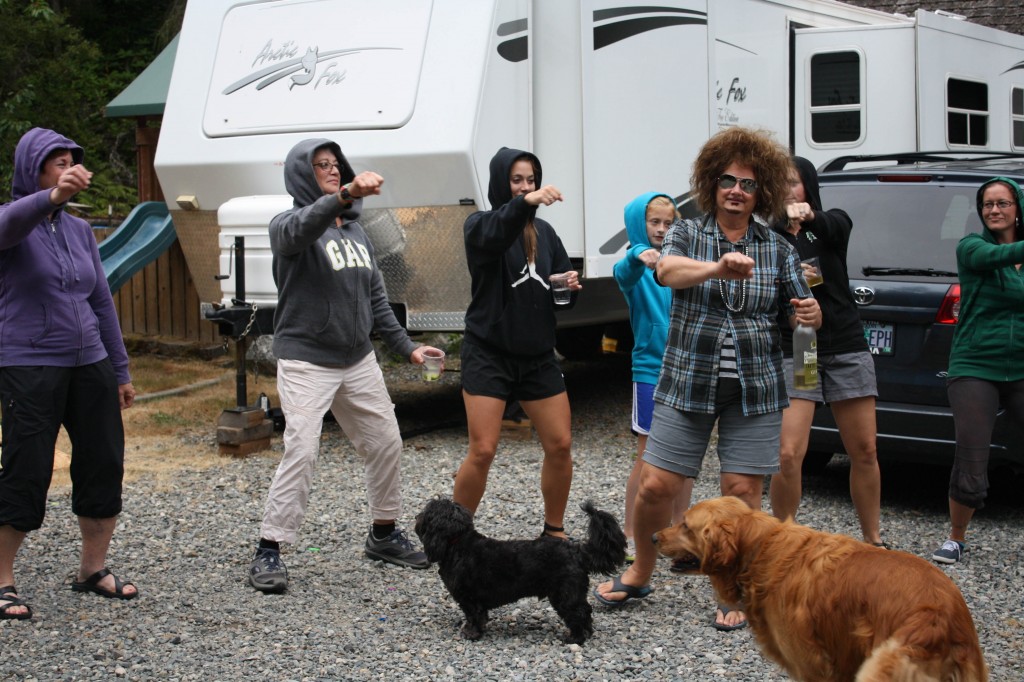 Kudos to the girls for doing an awesome job! And of course I was there to document it all. (And I was impressed with how quickly my aunt was able to get her hair back to normal. It would take me days to get the knots out of my hair!) Next up was the potluck (so much food), and my cousin Di’s amazing Sheep Herder’s Bread!! I love this stuff!!! 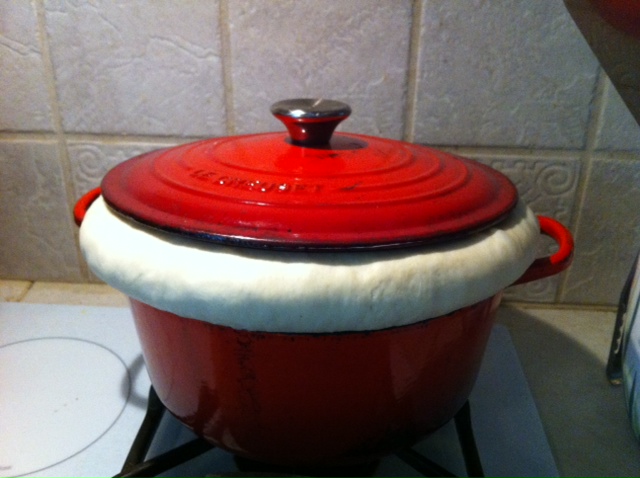 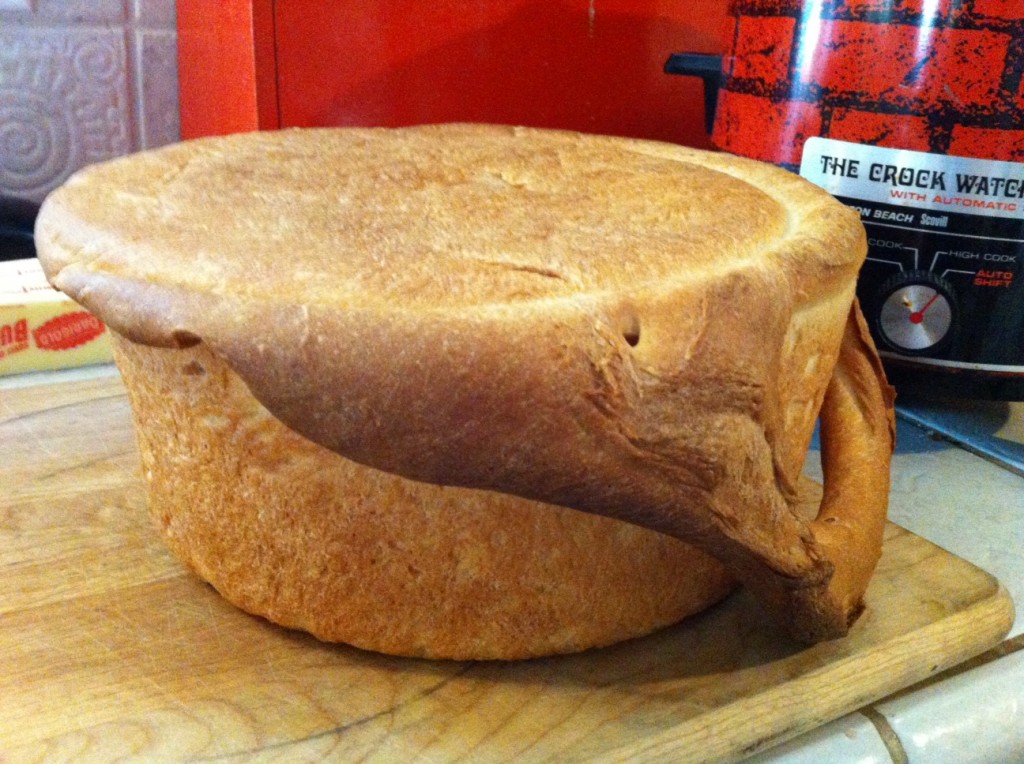 Then we all sat around the campfire playing Catch Phrase (and we might have turned that into a drinking game). Dang, I think it’s been a decade since I’ve done shots. And I can’t remember the last time I laughed as hard as I did this weekend! 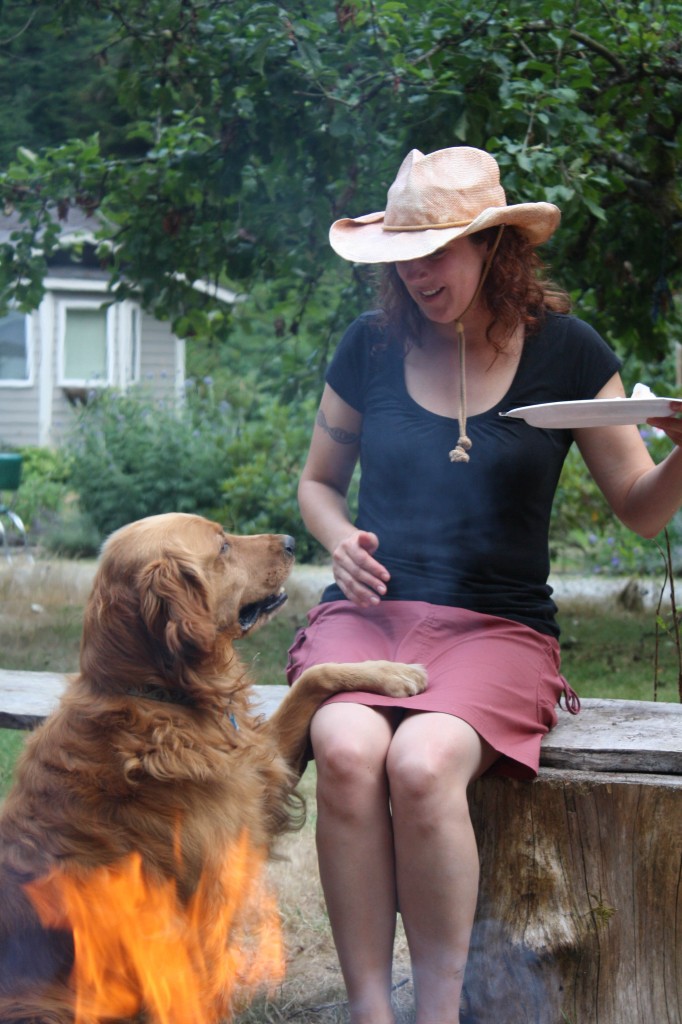 Another year of fun memories to be stored in my brain.

Your turn; tell me some happy family memories!