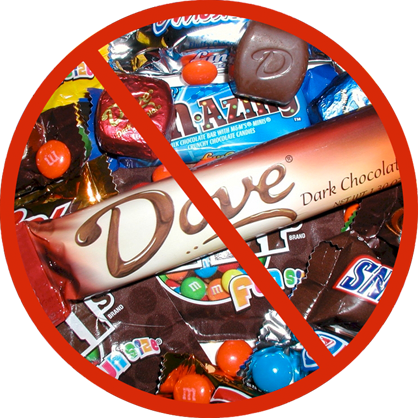 First, thank you for the support and comments on my post T is for Truth. It was hard for me to put it out there because I feel like a failure for letting the binge eating demons sneak back into my life. I thought I had it under control.

In that post I vowed to be more honest with myself in my logging and calorie counting. There were a few things I knew I could do to set things straight, it was just a matter of doing them.

The title of this post probably leads you to believe that I’m cutting out sugar entirely from my life. That is not the truth. I’ve found over the years that completely denying myself things set me up for failure and bingeing. But managing what I eat, paying attention to my portions and recording my calories accurately is what has worked for me so far.

The truth is I need to stop eating candy mindlessly at work.

No more candy at work. THIS I can do. After lunch if I am craving something sweet I can chew gum or have some mints or something. But to mindlessly eat candy just out of habit is what is making me fail. I need to limit my “candy” intake to just dessert. I mean really, how many desserts do I need in one day? One or none. That’s how many. 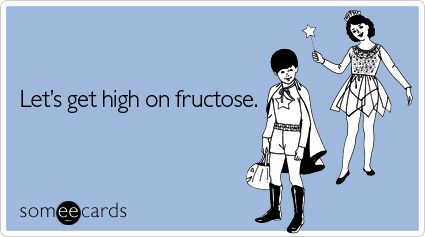 I did pretty well skipping the candy after lunch at work, or chewing some gum. It really was a mental shift. I’d walk by the candy room, see all the tantalizing treats I wanted and think “nope, not eating it” and keep walking. 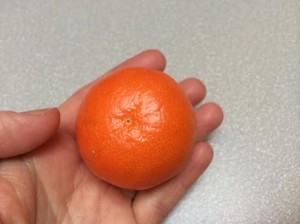 One day I had a small mandarin orange as my “treat” after lunch. Just as sweet as candy and only around 30 calories.

I need to be TRUTHFUL about the calories I am REALLY eating. The truth is I need to manage my portions better.

This is harder but I’ve been doing it loyally for the last week. Even if I don’t want to see the number in my MyFitnessPal App, I need to see it. Portions need to be accurate or what I’m recording as my calories is inaccurate and not helping me!

The truth is I need to stop eating dessert every single night at home.

It’s easy to rationalize eating dessert. If I work out and I have a bunch of calories left over I think, Sweet! I can have more dessert! And then I fail. It’s OK to have some calories left over for the day! I don’t need to eat all of them. AND it’s A-OKAY to have fruit for dessert! Sometimes just having something sweet at the end of the day is all you need.

The truth is I need to stop drinking alcohol for awhile. The liquid calories aren’t doing me any favors.

This is an easier one to accomplish. I’ve cut out alcohol many times before. Sure I miss it once in awhile after I quit but really, I’d usually rather have some chocolate over wine. This time around it’s easy to forgo the alcohol because after being sick for a week I had absolutely zero desire to drink anything. Once I get out of the habit of reaching for that glass of wine, I don’t think about it too much.

The other night we had steak for dinner. It’s been awhile since we had steak. I bought a nice one from Trader Joe’s, Michael cooked it up with a red potato and I topped the steak with Gorgonzola cheese. It’s one of my favorite home cooked meals. 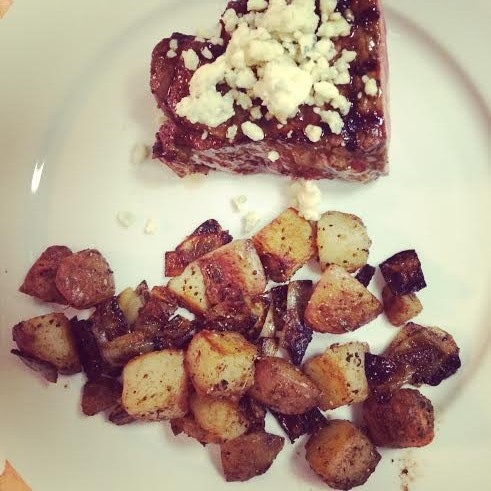 I have to admit, it was hard not to want a glass of red wine with it. In my mind steak and wine go together perfectly and it felt weird not to have at least one glass. But I resisted and just had water. Sure it was disappointing but I got over it. 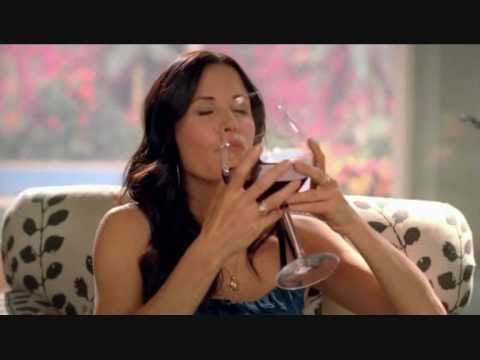 One glass of wine a week is something I can allow myself to do and not more often than that. I’m still considering cutting out the wine entirely for a little while. But I had one glass this weekend so…obviously I didn’t start it this weekend! 😉

And again, this doesn’t necessarily have to be a long term thing. Once I tackle the emotional aspects of why I am overeating and get a handle on it, I can look at my habits with a clearer head. Losing a few pounds will give me the confidence in my maintenance. I weighed myself this weekend and am down 1 pound, which was good to see but I sure didn’t like that number on the scale. So that’s where I am at right now. Trying to make some progress.

It’s been no secret I’ve been in a funk, probably since October but if I was entirely honest I’d say it started when Michael got laid off a year and a half ago. That was a tough 10 months but we got through it and his new job (since last September) is going great!

I recently said I got a temporary promotion at my job. I have to say it’s a lot of mixed emotions. 1) I’m stressed because I’m doing something new and I want to do a good job. 2) I felt an instant sense of relief stepping away from my previous job duties and responsibilities. 3) My new job has renewed my passion for what I do. I LIKE what I do again!

It’s a good feeling to not have dread. But since I’m still learning and feeling very fish-on-dry-land, I’ve come home feeling like a sloth. I still worked out but the second I got home I sat in front of the TV. For hours. And I definitely did some stress eating.

My dinners have been healthy and portion controlled. One night we had blackened salmon with steamed broccoli and raw peppers. The next night I made honey mustard chicken breasts and ate half the breast with satueed squash from the yard and more peppers. All healthy! Both meals between 500-600 calories total. 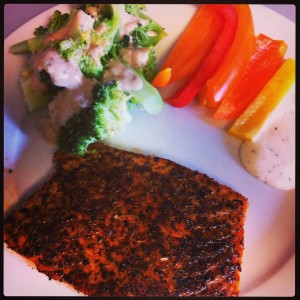 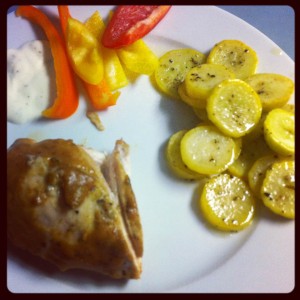 The after dinner snacking was not great. Friends brought ice cream to our 4th of July BBQ and left 3 cartons in our freezer. Sigh. One is Butterfingers (my effing favorite AND a trigger food for me). Michael bought a 5 pound bag of Gummy Bears from Costco. At least I only like the red ones….

Needless to say, temptations abound in my house. Not only are there temptations to eat but the temptation to sit and veg in front of the TV has pretty much been given in to these past few weeks. My reasons are above, Michael’s reasons are cycling. He’s biking to work every day and doing over 100 miles a week. I think his last update for the year was at 1100 miles total so far for 2013. Wow! So I get why he’s tired. 🙂

Friday night came and instead of going home and sitting in front of the TV I suggested we have a date night the cheap way. I went to my yoga class and then came home, cleaned up, and we got dinner to go from New Seasons Market in Sellwood.

They have a sandwich bar, kind of like Subway, but upscale and fancier. You get a checklist of what you want on your sandwich and basically build your own. They make it for you and wrap it up nicely and then you can go. The sandwiches are really good, too. I was surprised at the good quality, and much better than Subway! They also have lots of options; so Michael got his sandwich on a gluten free bun and I got mine on a regular ciabatta roll. We both got smoked turkey and havarti cheese, but Michael got bacon on his and I got chipotle mayo with grilled onions and Mama Lil’s Peppers. SO GOOD! 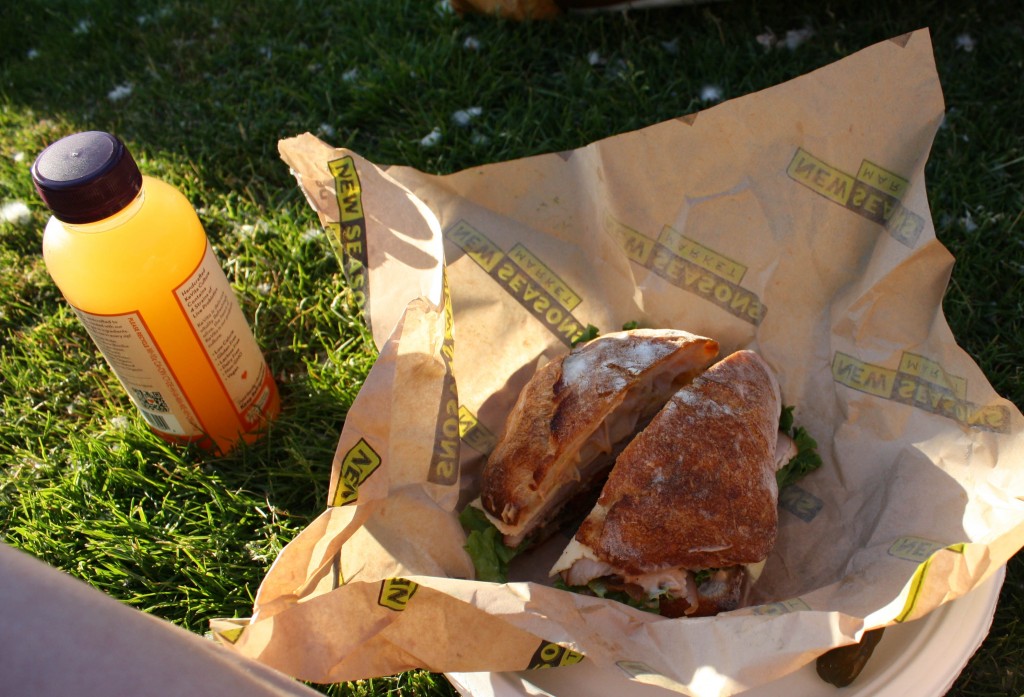 Don’t notice my pale white leg in the photo! We went to the Sellwood Waterfront Park that I’ve biked past a million times on my way to and from work. It’s right near the Springwater trail with a view of the Sellwood Bridge and downtown Portland. There’s also a free, off-leash dog park and there were tons of cute dogs playing in the park. 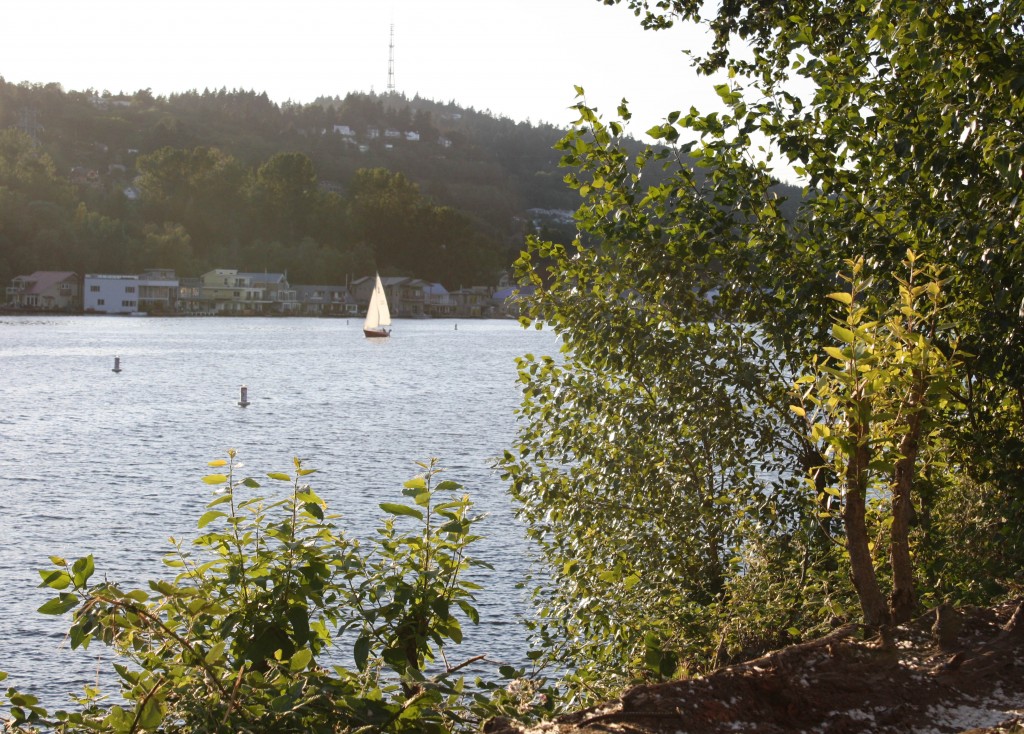 We sat on a grassy knoll overlooking the water and ate our sandwiches for dinner, enjoying the sunset over the hills. I tried a new drink, too: 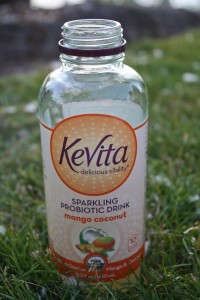 I was never a fan of coconut water. I WANTED to like it, especially back in the days when I was running a lot. It seemed like a healthier option than gatorade but no matter how much I tried, I hated it. I’m glad I gave this stuff a second chance because I liked it a lot. It was Kevita Sparkling Probiotic Drink with mango and coconut and I think it was only 20 calories for the bottle. It was like a sparkling water slightly flavored with mango and coconut. I’d definitely drink it again.

After our sandwiches we had dessert. Michael had half of his gluten-free brownie and I had half of my real brownie. It was pretty good but I make better brownies. 😉 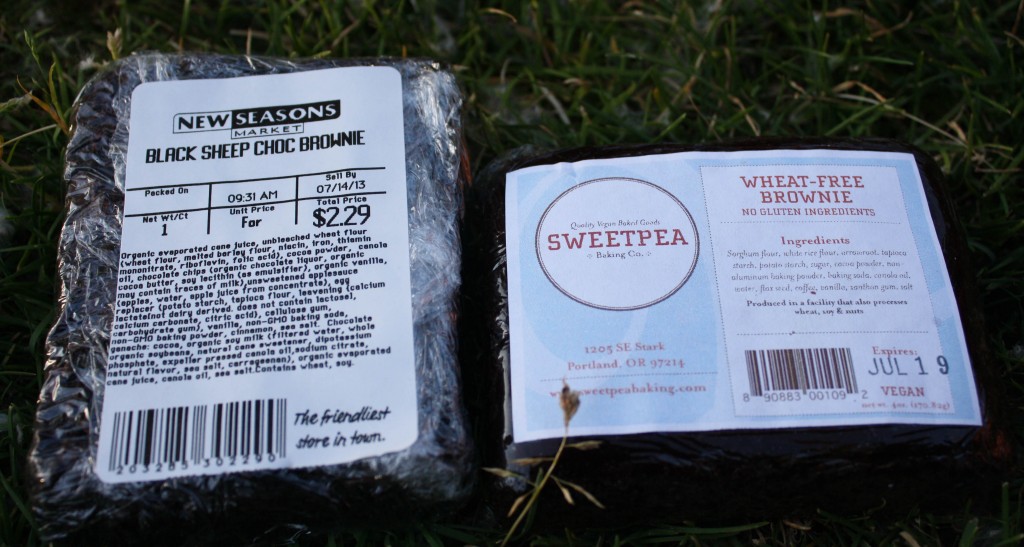 We cleaned up our picnic and walked down to the beach and docks. The sun was setting and it was getting cooler. The mosquitos and gnats were coming out, too. We watched the sun set, lounged on a park bench for a bit and then headed home. 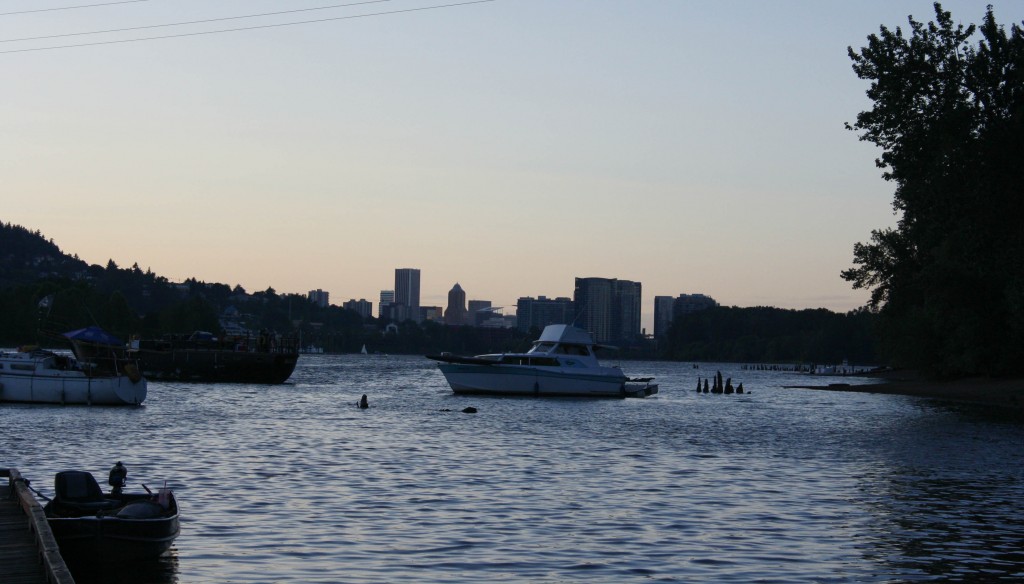 It was a nice, cheap, lower-calorie option for a date night than going to a restaurant. I definitely want to do it again because it was just really nice to be outside in good weather! It was peaceful and relaxing by the water. And it definitely got us out of our rut!