Usually my boyfriend and I go out for a nice dinner on New Year’s Eve. I like the glitz and glamour of getting dressed up and being spoiled at a restaurant. Last year we changed the norm and stayed home. We were preparing for him possibly losing his job in January–which did end up happening–and wanted to tighten the reigns in anticipation. Thankfully, after a long 9 months unemployed, Michael got a new job and a fantastic one at that.

We had so much fun last year cooking a really nice meal at home and spending the evening playing scrabble together that we decided to do it again this year. Last year I made my very first ham and it turned out great! This year, we made something different: Gnocchi with Chard and White Beans and I added chicken to the recipe I found.

I bought purple chard AND some kale at the grocery store and I used both in the recipe. I bought the gnocchi at Trader Joe’s, which is the only store I have ever found it in. I also added some fresh grape tomatoes, also from TJ’s, to the recipe in addition to the canned tomatoes. I thought the fresh tomatoes added a lot to the recipe and I’d definitely add more next time. 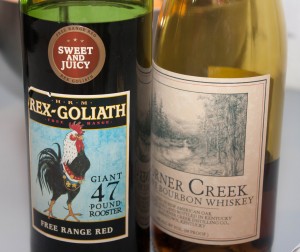 I opened a nice bottle of red wine, even though the red didn’t really go with dinner. It was what I wanted and it actually ended up tasting pretty good with the gnocchi and chicken. Michael had a glass of whiskey then switched to an IPA. I set the table and lit some candles and turned on the music. It was fun cooking together and the recipe was SUPER easy and fast. This could most definitely be a work night meal. 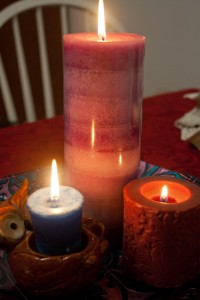 Everything was done in one skillet, so the clean up was easy as well. Next time I would add more of the tomatoes, and more greens. I didn’t really add as much as the recipe called for and I regretted that. The chard and kale went perfectly and I wished there was more in it. As for the chicken, Michael baked a boneless chicken breast with just some lemon pepper seasoning and when it was done, chopped it into bite size pieces and threw it into the skillet at the last minute. 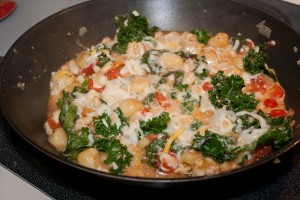 The chicken definitely added something to the recipe. I’m so glad we did it. The chicken and gnocchi and greens were fantastic together. Michael felt like the white beans weren’t necessary but I kinda liked the beans in it, too. 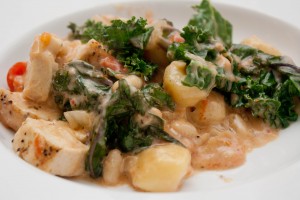 The cheese melted in the skillet and mixed with the tomato chunks to make a sauce. This recipe was most definitely a winner! I halved the recipe and made three servings (yay leftovers!) and because I added the chicken to it the calorie count was off. I’m guessing it was more in the range of 450-500 calories for the entire dish. (I also added more cheese.) 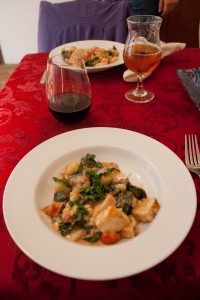 After dinner we shared some Ben & Jerry’s Karmel Sutra ice cream for dessert and then worked on the crossword puzzle we started on Christmas. 😉 Yes, it’s taking us a week to finish it! Fat Kitty was super excited about everything and just HAD to make his presence known. 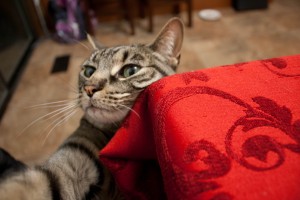 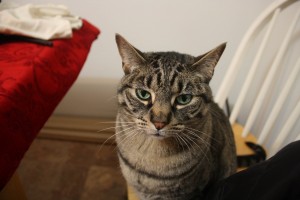 Man he looks so grumpy in that photo! He didn’t like that we were ignoring him to finish the crossword. Before we came home to fix dinner, we saw a movie, Django Unchained. I wanted to share my mini review of that.

The movie started out really, really strong. The first half of the film, I LOVED it. It was exciting, intriguing; it had a great story, the characters were interesting, the acting superb (I even thought “wow, I see Oscar in their future”), and the camaraderie between Christoph Waltz and Jaime Foxx was great! I don’t want to give too much of the plot away, so I will be a bit vague.

While the slavery aspect was really, really hard to watch and that horribly racist word was used a lot, I was able to ignore that because it was the time period and that’s what the story was about. But honestly, 3/4 into the movie I was over it. The use of that word was too much and it became every other word and I found myself cringing. That needed to be toned down. Also, it is very, very violent and graphic so if you can’t handle people being shot on film don’t see this movie. There were a few scenes where I just had to close my eyes because I couldn’t take it. Finally, my last complaint was that Tarantino needed an editor, badly. Like I said, the first half of the movie was GREAT. The second half had some pacing issues and there were quite a few scenes toward the end where I thought “Oh my god is this OVER YET?”

Don’t let that deter you from seeing it, though. Despite the missteps, the movie was still really good and Christoph Waltz seriously stole the show. I hope he goes on to very big things in his future because he was riveting. There were also a lot of other big names in the movie that threatened to steal the show (Samuel L. Jackson’s and Don Johnson’s characters). Oh, and there’s a part in the movie that will have you rolling on the floor laughing so hard. The only hint I’ll give: it’s Jaime Foxx’s outfit change. 🙂 Okay I’ll give you another hint: my first thought when I saw it was “Is that Prince?” 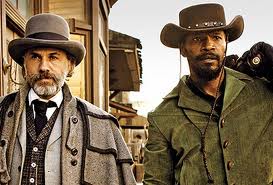 Anyways, it was a fun New Year’s Eve: good company, good movie, good food. I hope you rang in the new year with your loved ones!

QUESTION: How did you spend NYE? Have you seen Django Unchained?