I got some new hiking boots!

I really needed them. For awhile now, whenever I went hiking my feet hurt. My ankle hurt in a weird spot (achilles) and I couldn’t go as far as I would like. Our most recent hike was super easy and flat and my body was NOT happy. Later that night when we got home I was hurting. I even had shin splints. So the next day I went to REI and tried on some different boots and ended up with these:

Merrell Moab 2 boots. I love REI and I can try these boots out for 1 year and if I don’t like them or they cause me issues, I can return them! I think that’s awesome!

I got to test them out over the weekend. We had plans to go to the beach with friends but they weren’t feeling well. We decided to go anyways and go for a hike. We did Tillamook Head in Seaside. We did it once before, when Logan was little. Check out the old post and see photos of LITTLE Logan!!! Oh my!

It’s kinda crazy that last time we did this hike, Logan was probably a year and a half old and still in the hiking backpack. LOL Now he’s a little hiker!

He did so good! We did almost 3 miles roundtrip and he didn’t ask to be carried or act tired at all. We turned around and headed back because of time and lunch.

The trail is still pretty wet, soggy, muddy and slippery in places. But we did ok.

There were only a few parts of the trail that were kinda sketchy for a little kid (a washout). Last time we did it, there had been damage from trees and the trail had been blocked. They’d fixed it and we had no issues this time.

It was a great hike!

It’s a pretty steep hike, too. Lots of uphill. Despite it being the hardest hike Logan’s ever done, he did a great job!

After the hike we drove a short ways to the beach. I’m not sure which beach it was but it was popular with surfers!

We had a picnic lunch on the beach. It was sunny and almost 70 degrees.

It was so nice! We had a great time. Then Logan played in the sand, of course.

And then Logan and I played in the surf. He loved standing at the edge and then running from the water as the tide came in.

We did that for a long time (surprisingly, the water wasn’t too cold!). Then Logan and I got hit with a big, surprise wave! I grabbed Logan and picked him up and ran for the shore! I was drenched from the waist down. Yikes. LOL We were ok and I wasn’t in danger of falling down but Logan did. Thankfully I was holding on to him and was able to pick him up quick. It wasn’t scary until like an hour later. Oy.

Since we were both drenched and it was around 2pm anyways, we packed up, changed at the car and Logan fell asleep immediately.

It was a great day, despite the wave drenching us. It was nice to get out of the city and get a mixture of woods and hills and beach! AND my new boots were GREAT! No pain at all!

With Michael being gone in Seattle for a few days, me being sick and just having a ton of plans lately, it was nice when Sunday finally arrived and we could sleep in (which was amazing after being up so late for Faith No more) and then spend the day tromping through the woods. It was such a nice day, nearly 80 degrees! We packed up the car, grabbed lunch on the way from Potbelly and drove about 45 minutes to LL Stubb Stewart Park. 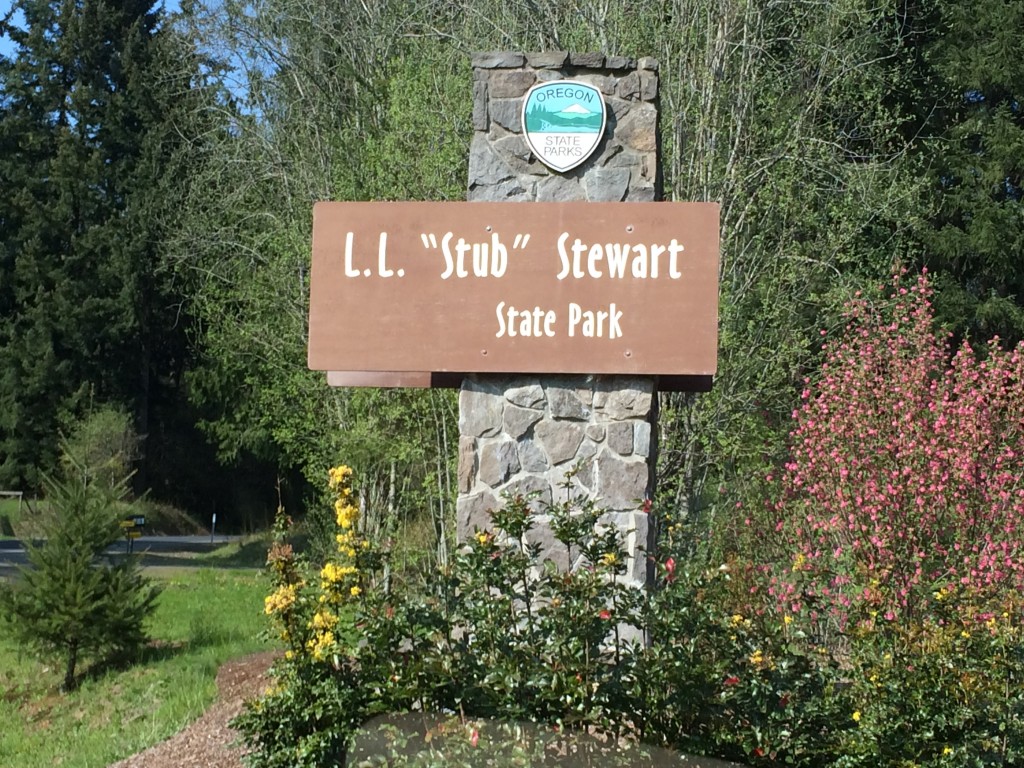 It’s towards the beach but still fairly close to Portland. Years ago when we were training for something–maybe Reach the Beach–we drove out to the Banks-Vernonia Trail and did some biking. The trail connects to Stubb Stewart Park but we never actually checked out the park. We arrived about lunch time. For lunch I had the “skinny” turkey breast and swiss sandwich. It was the first time I’ve been to Potbelly and it was pretty good (a nice change from Subway) and what was nice was that they had the calorie count on their menus. My lunch was around 400 calories + 140 for the chips. 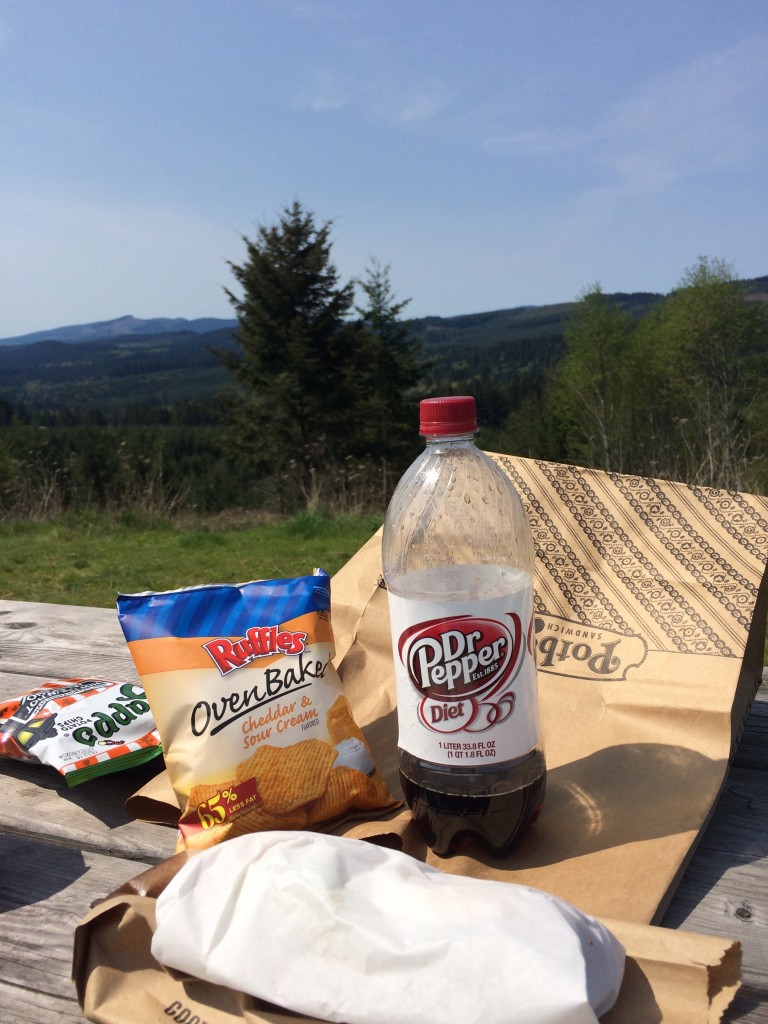 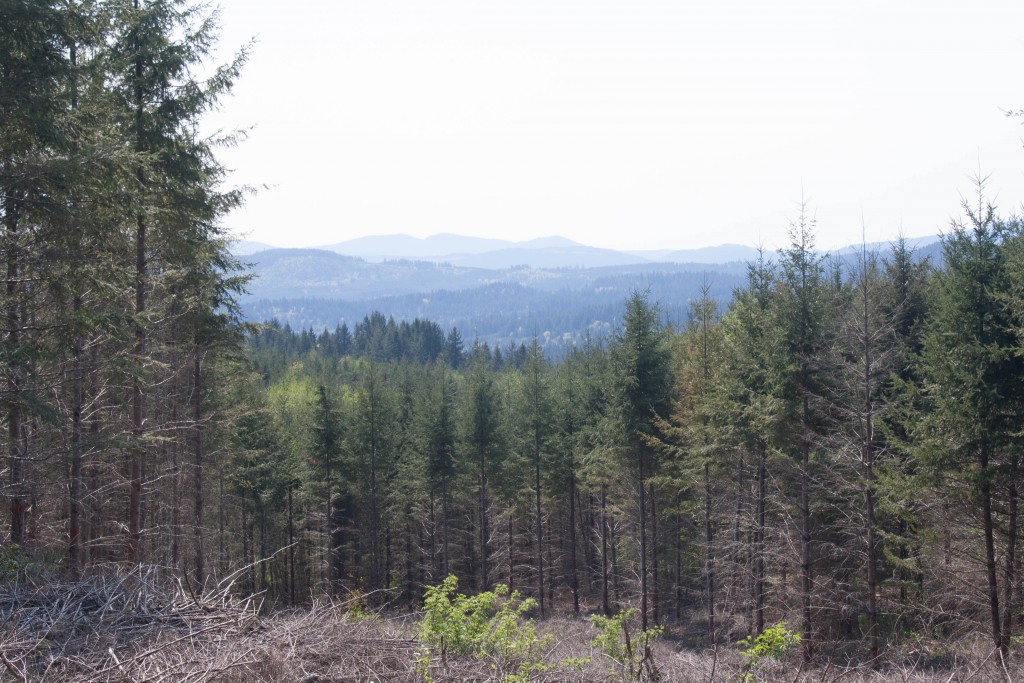 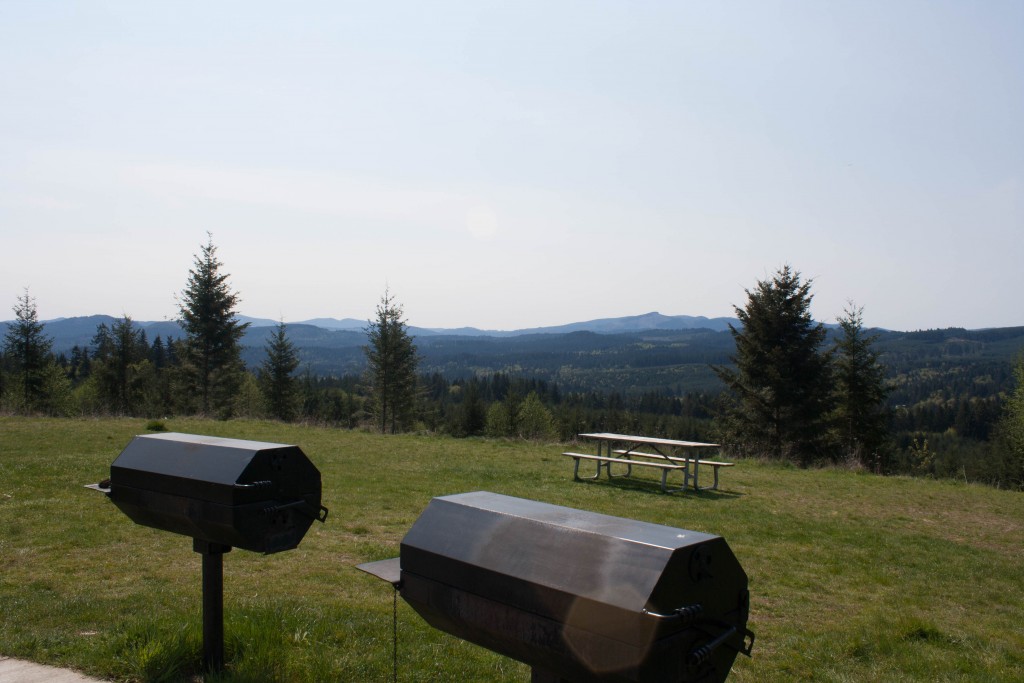 That was our view for lunch. We got a map of the park. There were like 20 miles of hiking trails, mountain biking trails, horse-riding trails and there was also a disc golf course! Plus there was camping options and cabins for rent: 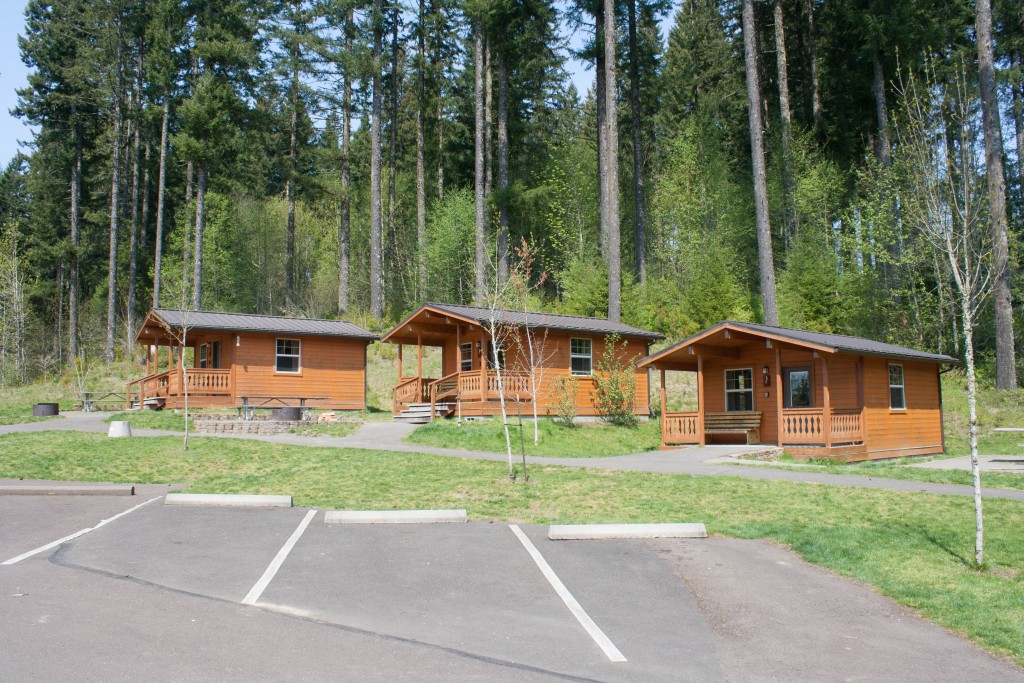 I REALLY want to go back there this summer and stay there for a weekend. It was such a cool park. There were parts of it that weren’t finished, but it was still a great day exploring. We took the map with us and sort of consulted it but really just wandered. The trails were all connected and you could go a zillion different directions. 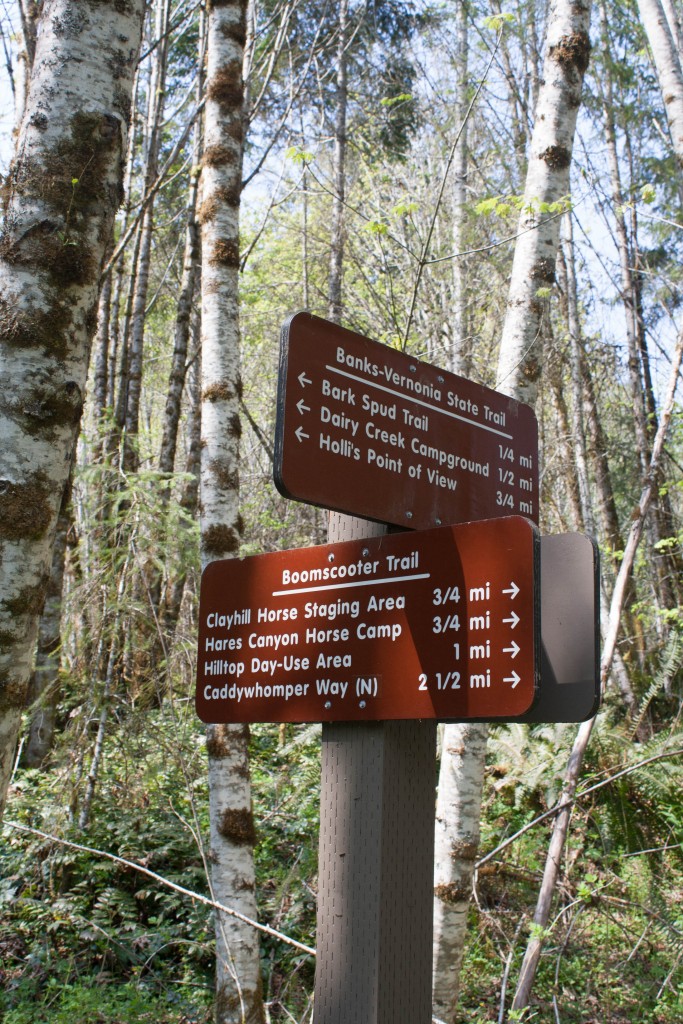 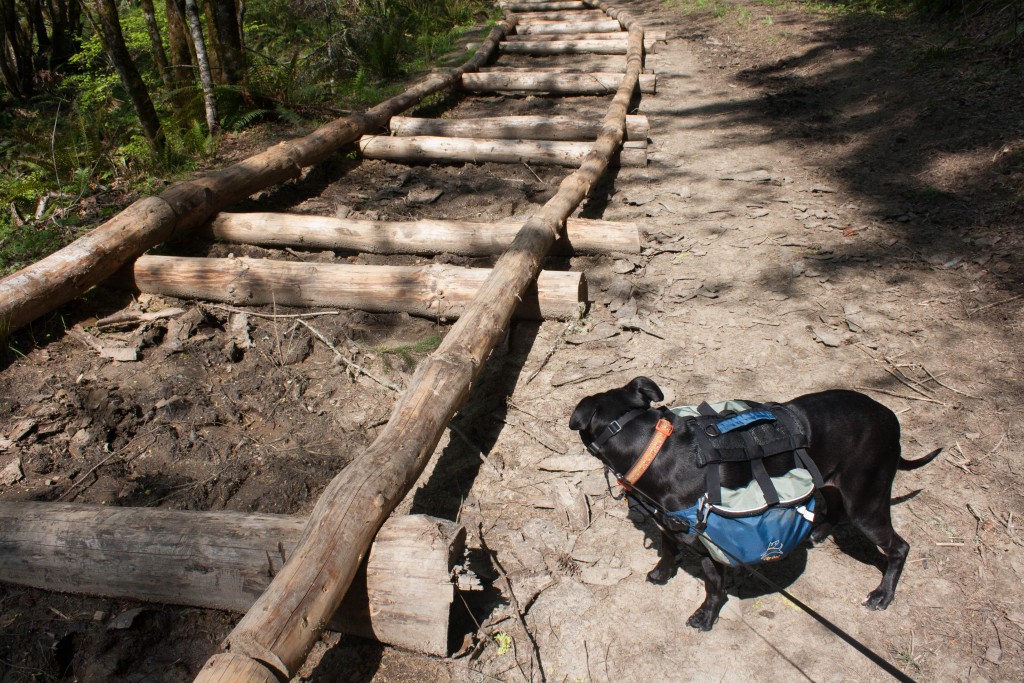 There were some wildflowers blooming but most of it was just greenery. 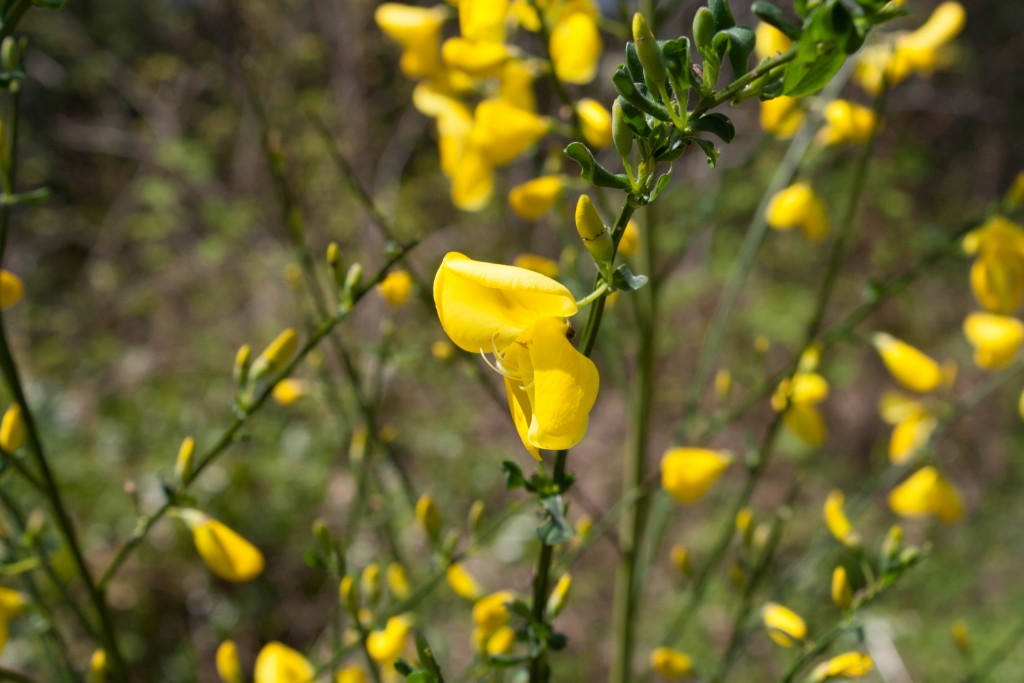 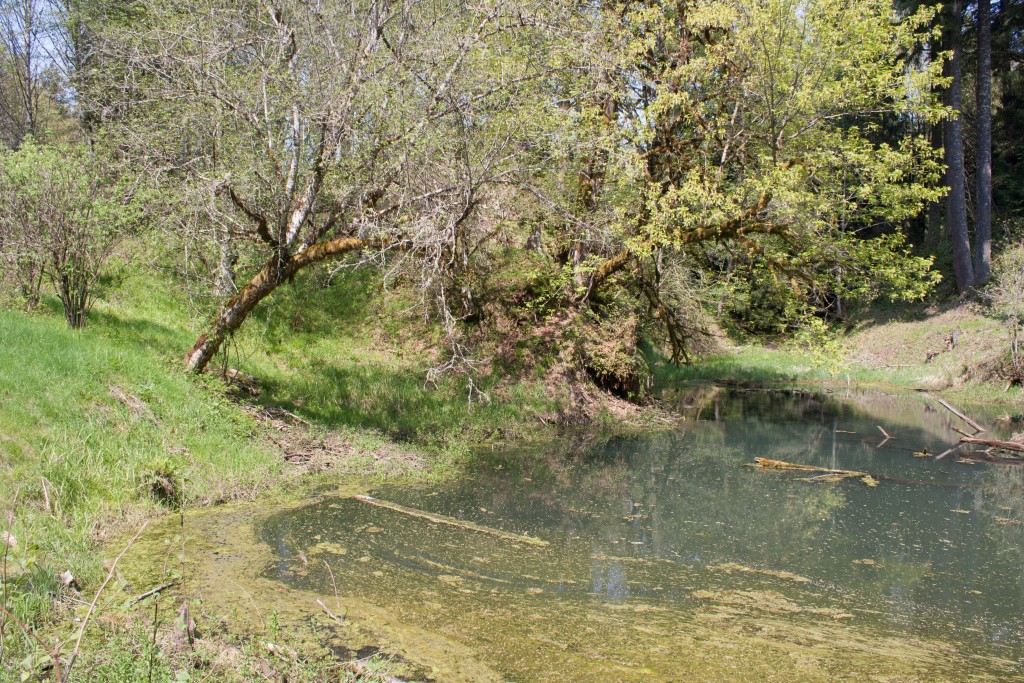 I wish I could really detail which trails we explored but I really have no idea. We took so many turns and twists there’s no way I could really remember. At least we didn’t get lost! We parked at the Hilltop Lot (which had really nice bathrooms and picnic areas, covered and not covered) and did a trail near that parking lot. It was pretty easy and mostly downhill and our heart rates never really got over than 100. Then we took this trail: 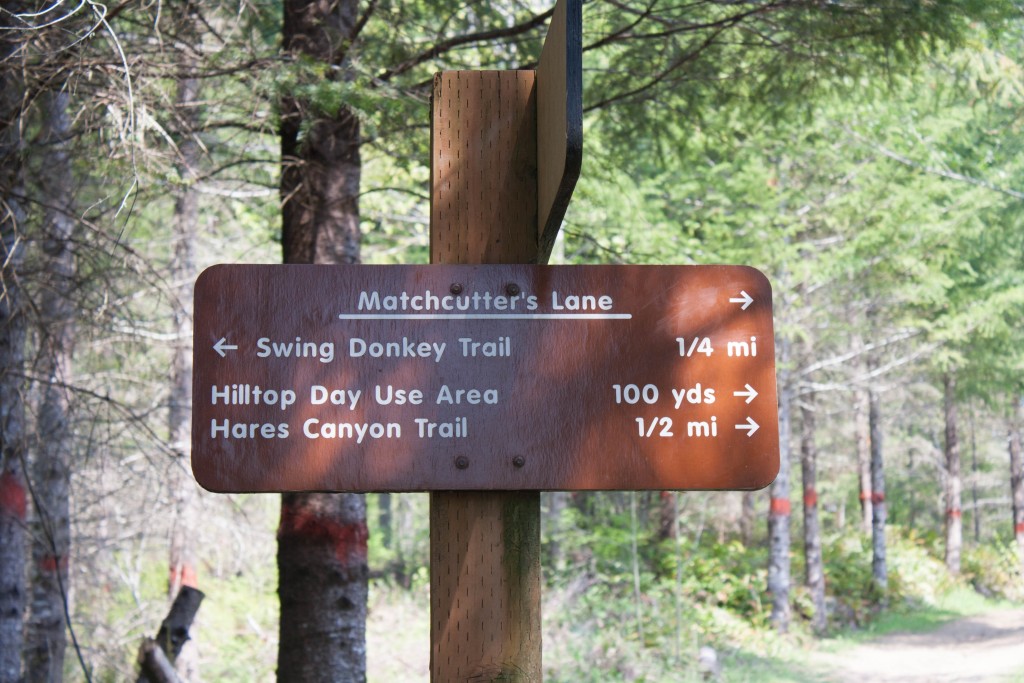 The Matchcutter’s Lane was STEEP. Both of us felt REALLY out of shape. And we kind of are. It’s been a few weeks since we’ve been hiking. I’ve been taking it easy in the gym due to my latest injury, so I was really feeling the climb! We found ourselves back where we started, at Hilltop Parking. We’d made a giant circle and it was actually perfect timing because we needed to refill our water bottles and Bella was panting a LOT so we decided to take a 15 minute break in the shade for her to cool down and drink a ton of water. 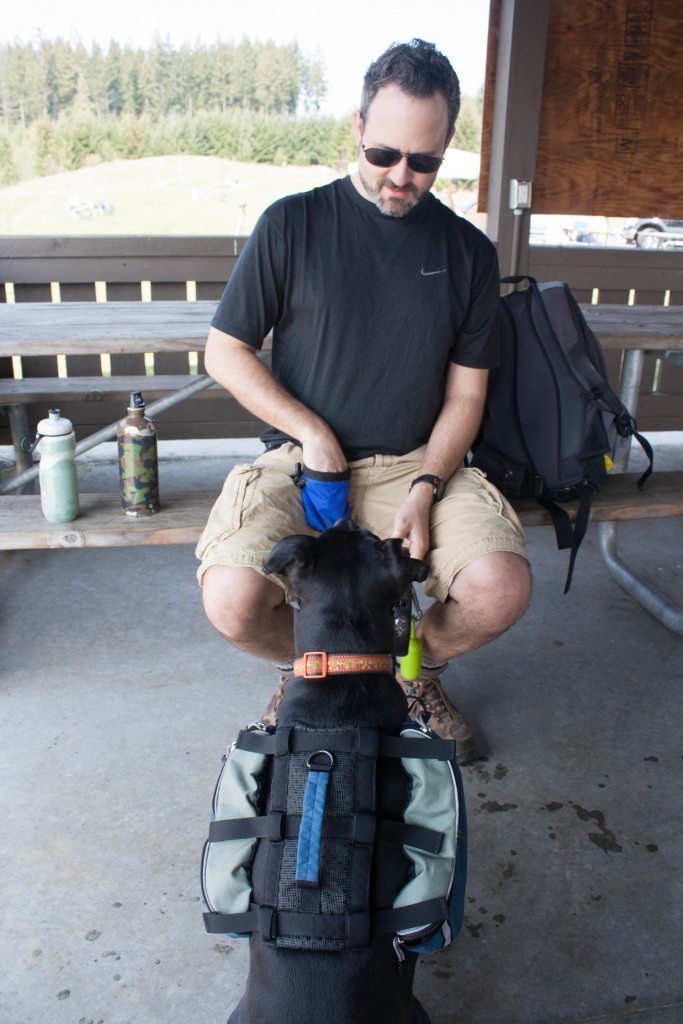 And have treats. After the break we decided to try and do the other side of the park, across the “street” from where we parked. 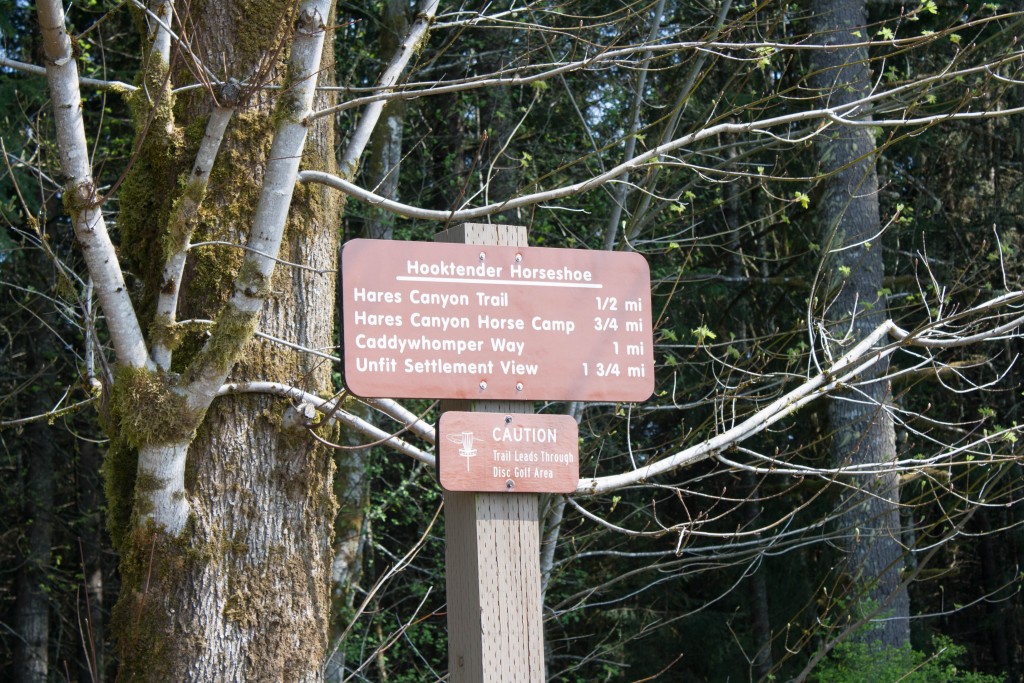 This part of the trail was mostly covered and it was park of the disc golf course and the mountain biking course. There a few bikers out on the trail, and there seemed to be a designated area with lots of cool things for mountain bikers to do (like wooden bridges and ramps and stuff). 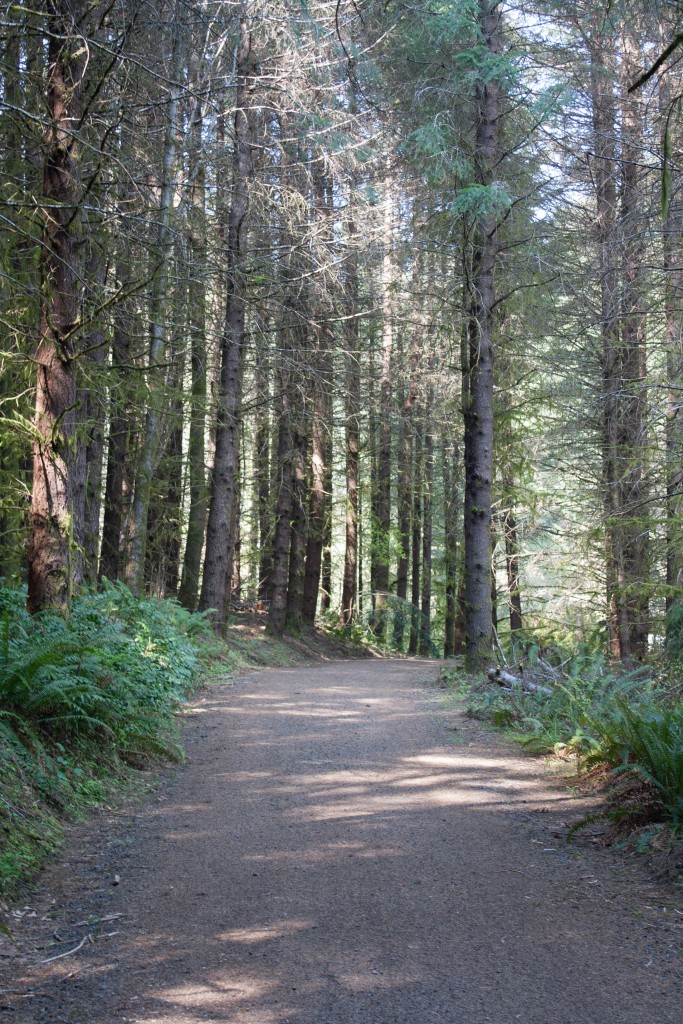 On this hike I got to test out my new boots on lots of different grounds: pavement, gravel, dirt, soft padded forest covered in pine needles, rocks and mud. They worked great! Generally speaking if you get new boots you shouldn’t do TOO many miles when you are first trying them out. Our plan was to do about 4 miles. 3-4 miles is good for a first time outing. But we ended up doing a little bit more than that, more details to come.

This hiking trip was a bunch of firsts for Bella! First, she discovered what a SNAKE was. 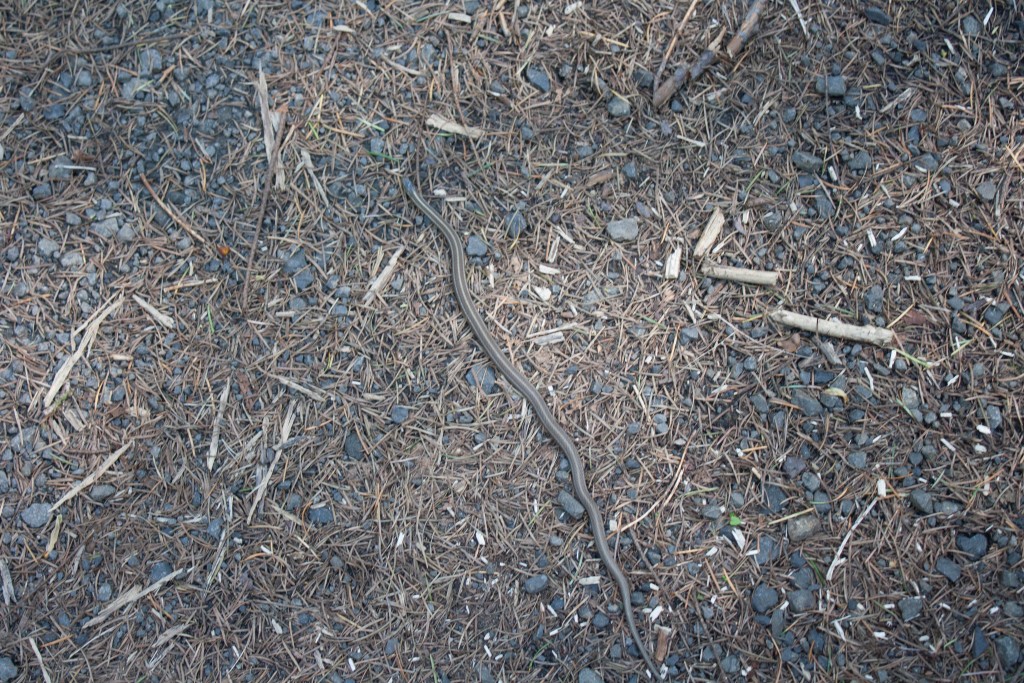 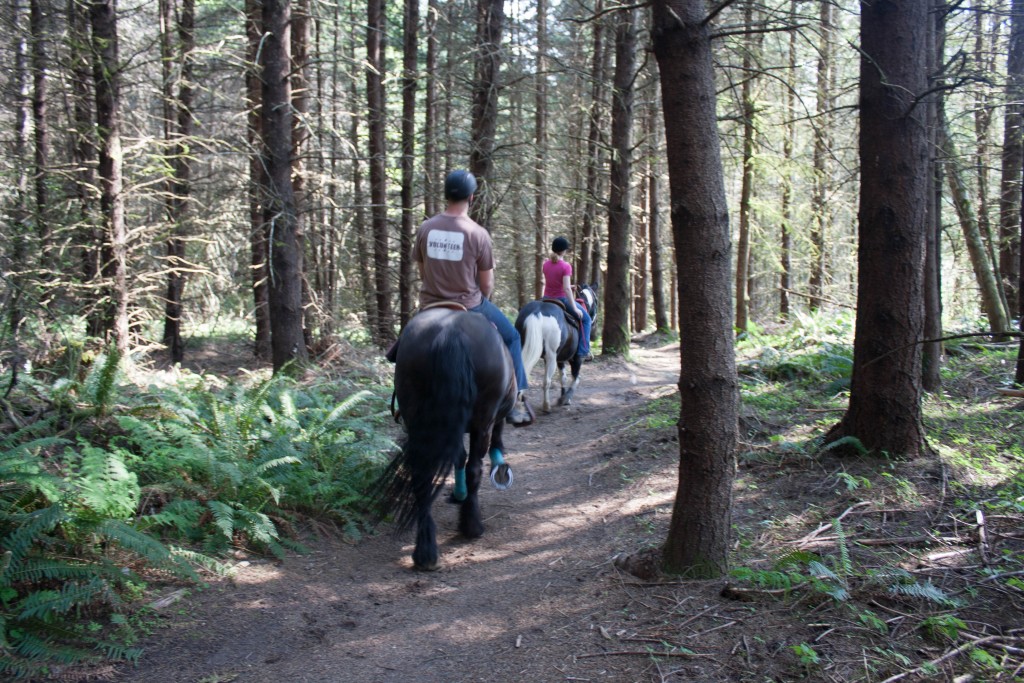 We came across some horses on the trail and Bella was more than slightly freaked out. I think *I* was more freaked out. We stepped off the trail and let them pass and I warned the people that Bella might bark at them. I worried that she’d bark and spook the horses but she was good! She seemed terrified and cowered behind Michael and didn’t bark. They passed us on the trail and we continued on.

Supposedly there was a “viewpoint” and even though I was pretty done hiking at this point, I agreed to keep going. I should have said no because it added about 1.5 miles to our trip and that was a little too much for a first time in my new boots. And yeah, the viewpoint wasn’t much. So… 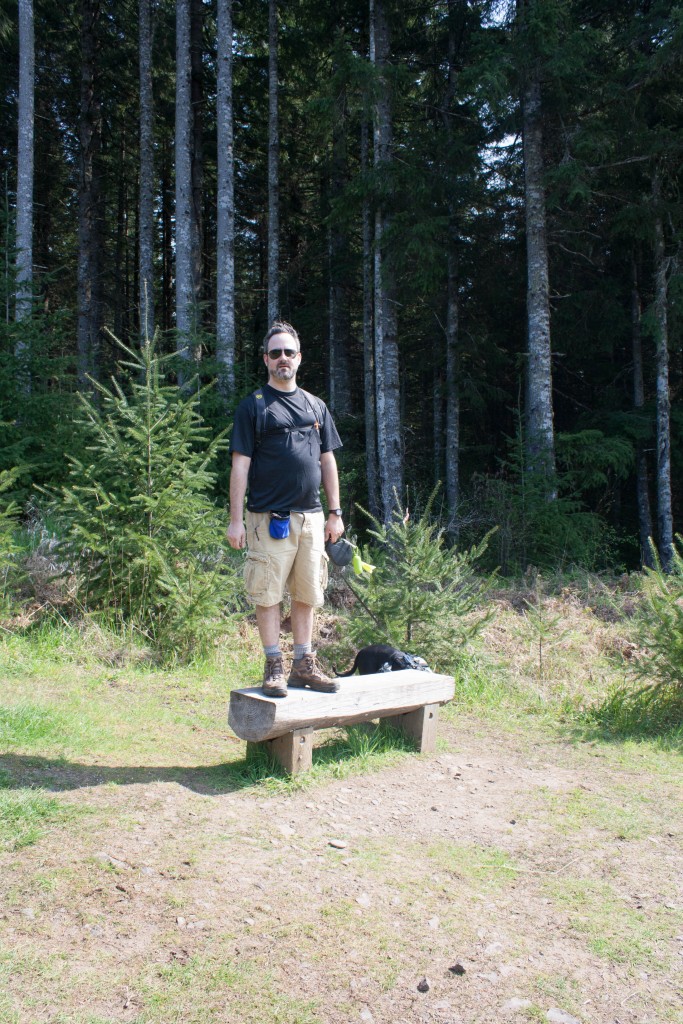 After the (lack of) viewpoint, we turned around and went back down the trail. 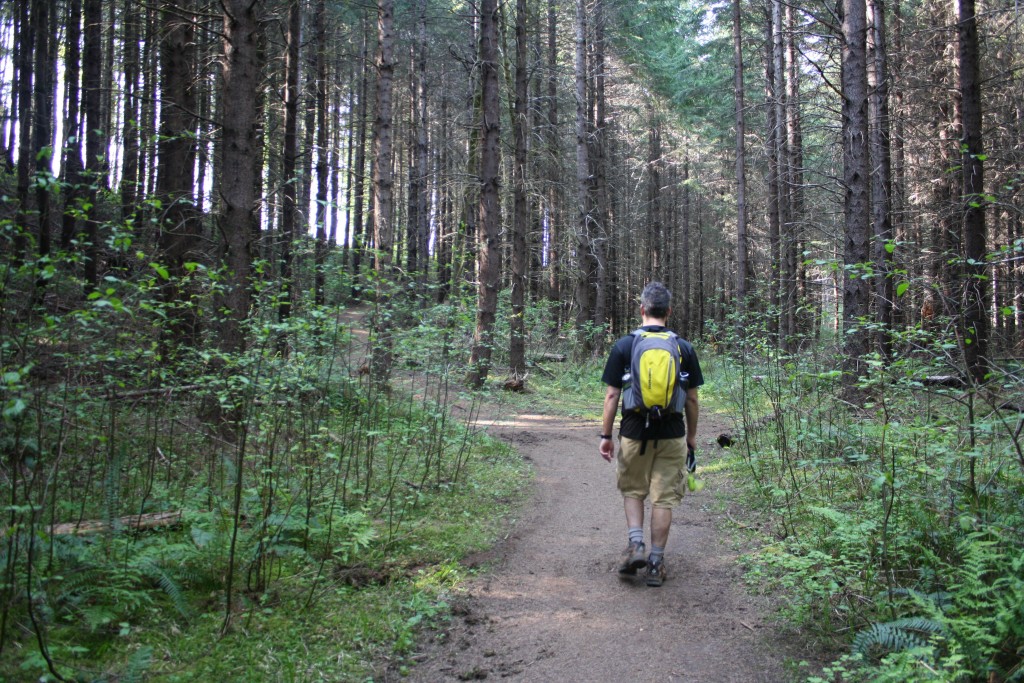 I was hitting the wall. My feet were starting to hurt–not really pain from the boots (I don’t think) but more fatigue. I was starting to drag but we had like 1 mile left to get back to the parking lot. We hiked through dense forest and then all of a sudden I heard the THUMP THUMP THUMP of horse shoes. I heard the horse before I saw it. It was trotting up the trail behind us.

I shouted “HORSE!” And Michael scrambled off the trail, pulling Bella into the bushes. Thankfully the lady on the horse saw us and slowed down. She apologized for scaring us and she didn’t scare us, just more like…made us urgent. LOL I wanted to get Bella away from the horse in case she freaked out. So we waited on the side of the trail for them to gallop up the trail. 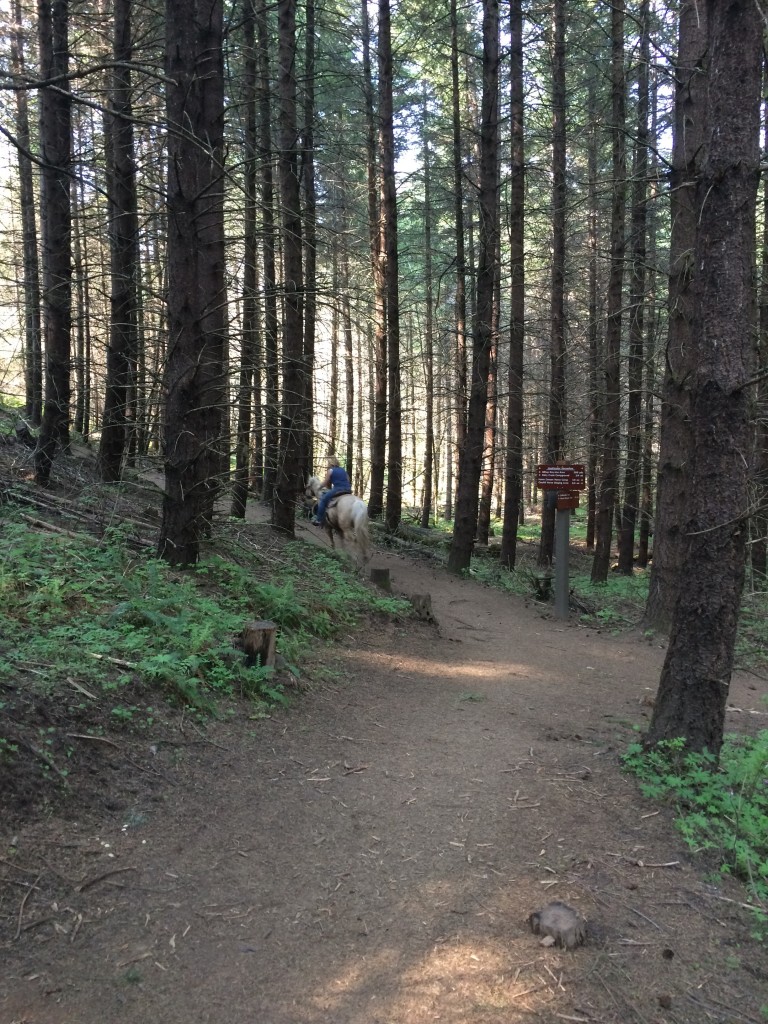 Bella was super freaked out, but again didn’t bark. So that was good. (On a side note, I love horses and as a kid I used to go to horseback riding camp and LOVED it. I really want to go riding again soon.) 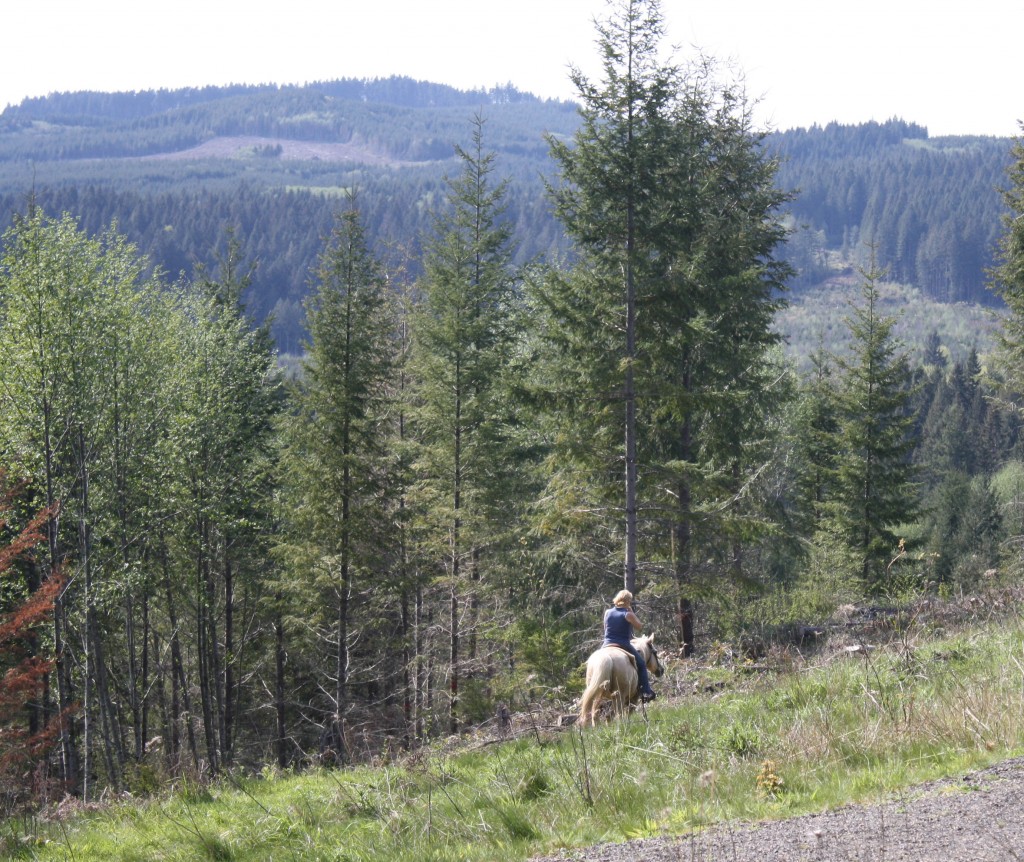 We got back to the car and I was so grateful to take off my boots and thick wool socks, put on some flip flops and change my sweaty shirt into a tank top. Felt immediately better! We ended up hiking 5.85 miles! About a mile and a half longer than I had planned on doing, but I’m glad we did it! 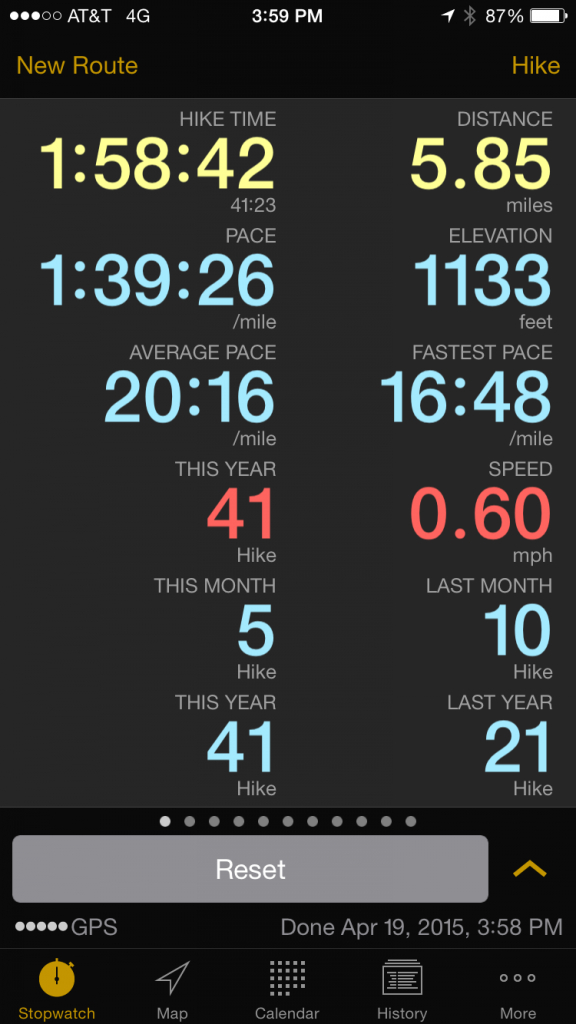 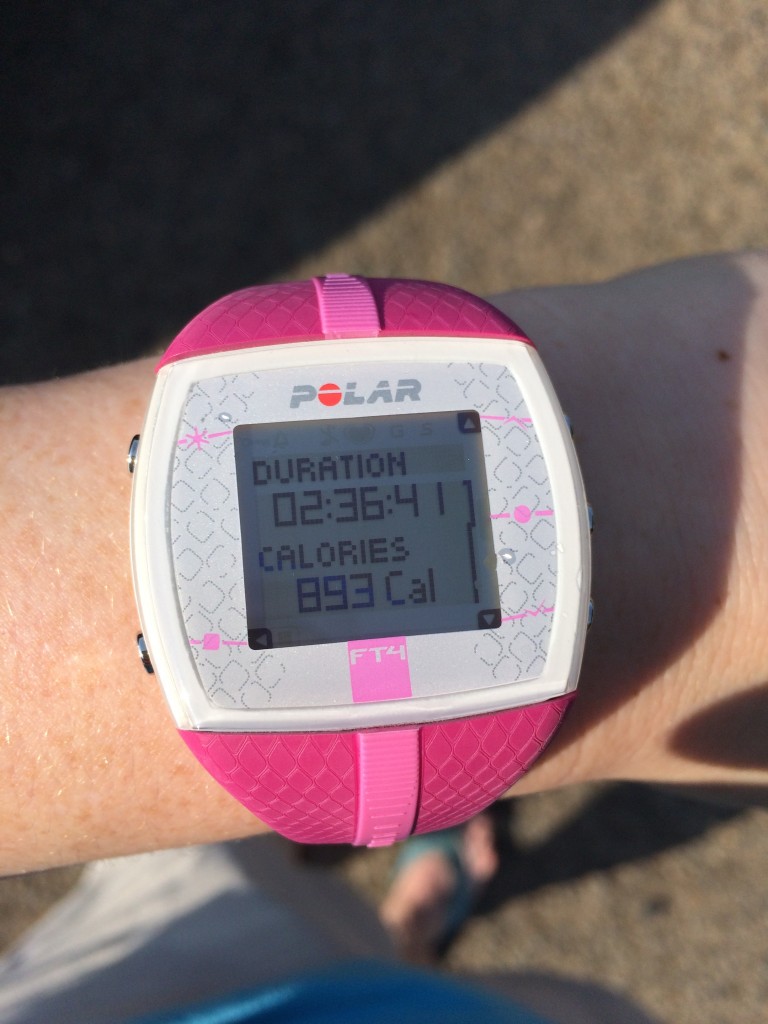 We started to drive back to Portland and for awhile we were stuck in the “everyone returning to Portland from the beach” traffic (suck) but it wasn’t too bad, honestly. We were both hot, tired, sweaty, sticky and thirsty. So of course we stopped at DQ for a refreshing beverage. I got a Pina Colada Orange Julius smoothie and it was DIVINE! 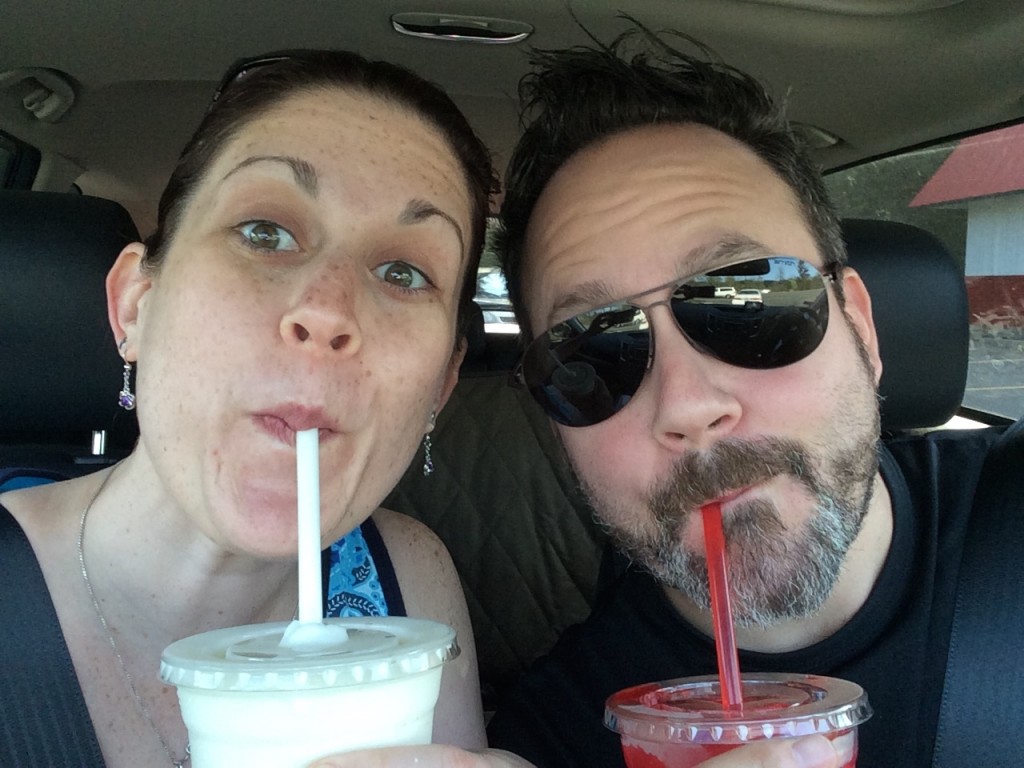 Bella zonked out in the backseat of the car for the entire ride back to Portland. 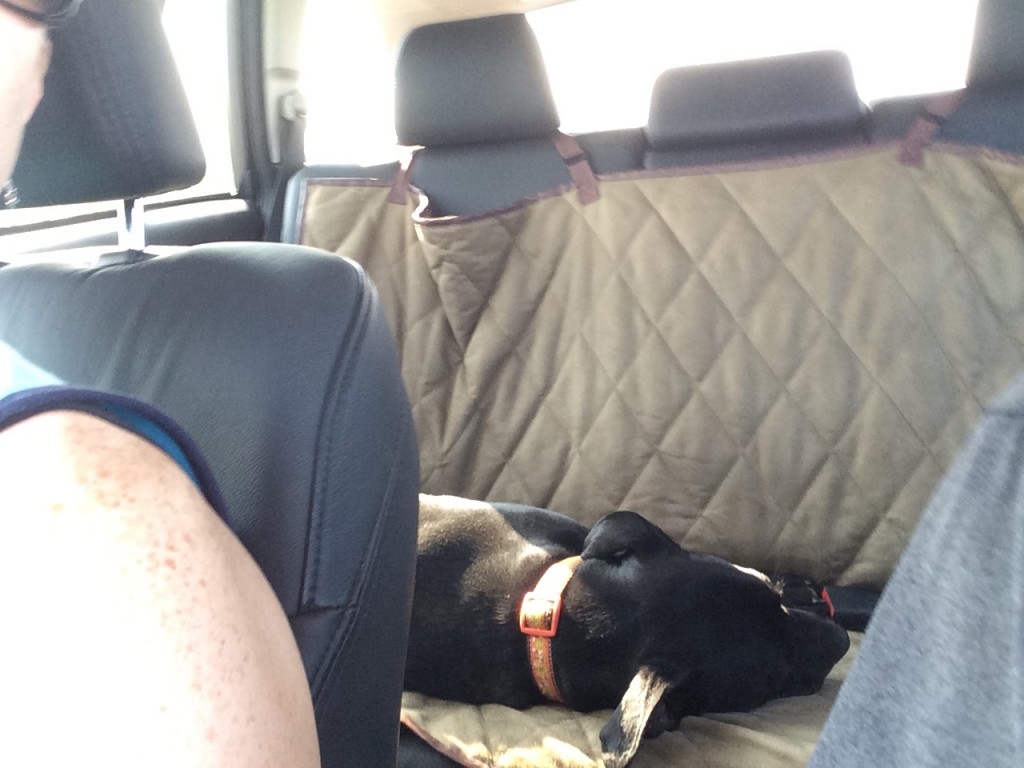 What a good day!