My back: it’s finally feeling better! (I sure hope I don’t jinx myself.) I’ve been going to physical therapy, massage therapy, and chiropractor. I got a standing desk at work and I was taking a break from certain activities (no yoga since this all started, so 3 months I think?). It was really really frustrating but I think I’ve turned a corner.

The week before I went on vacation my back was cranky. Flying didn’t help it; but once I got to Arizona my back felt really good. (Actually most of my aches and pains went away in Arizona.) When I got back I had a really good week with no back pain and then last week was even better! I am able to move around and sit for longer periods without feeling pain–there are even days where I even FORGET I had back pain. YAY!

I am starting to incorporate the swing back into my weight lifting set. Not doing too much yet, but easing into it. My goal is to get back to the Warrior Room this summer/fall. I may have to modify a lot of activities in the classes but I am going to try!

The next thing I wanted to test out was cycling. I’d talked to my physical therapist and chiropractor about it a month ago and they were both like….meh I’d wait. Since I have a road bike and will be a little bent over while riding, they didn’t think it would be a good idea yet. The therapist said I should wait until I was pain-free for 10 consecutive days. Well, it’s been several weeks now so I am trying!

I am LATE TO THE SEASON this year. 🙁 It’s a bummer. But it is what it is. Usually I start biking to work at the beginning of May.

So…here we are, almost mid-June and I had my first ride to work. I drove part way and parked in Sellwood.

It was a little cooler that morning that the previous mornings in our first summer heat wave. As I set out on the bike I was a bit cold! I wished I’d had my compression tights on but I tried to suck it up and once I got out of the shade it was tolerable. Chilly but not miserable.

I biked up the Springwater Trail, which was pretty empty. My back felt a little tight in the beginning and I thought Oh no, maybe this wasn’t a good idea… 🙁 But overall the back felt okay once I warmed up. Perhaps I should have done some stretches before getting on the bike (but I felt rushed and late and anxious!).

I biked by the new Max station! It’s not up and running yet, supposedly this Fall. It looks shiny and new! 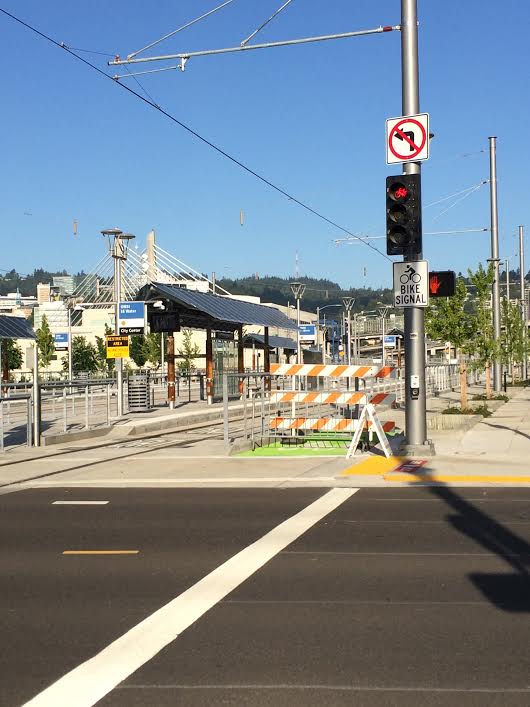 Feeling pretty good thus far: back okay, knees okay, trying not to push myself too hard and just bike. I felt slower than I ever have in the past, but that’s ok. I think it’s been since August since I was on the bike! 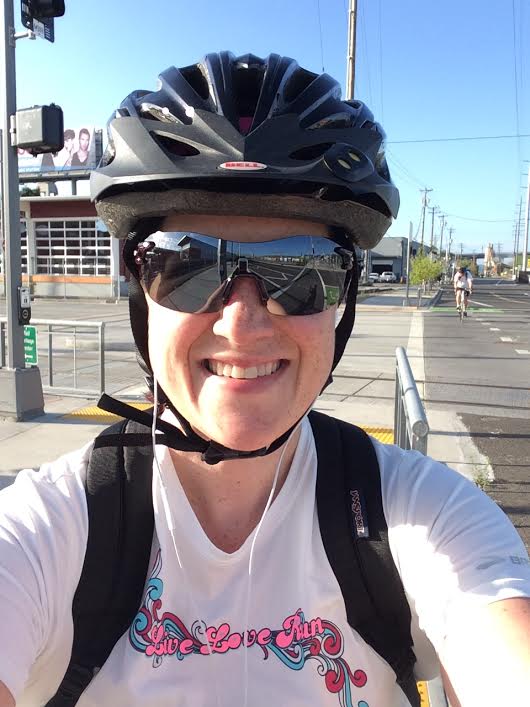 I decided to cross the Hawthorne Bridge because I thought I was short on time (I wasn’t in reality) and didn’t want to take the Steel Bridge. I hate biking across the Hawthorne Bridge. It gives me so much anxiety. It’s absolutely crazy. Super busy, aggressive bikers, crowded with runners and walkers and just chaos. It feels dangerous so in the past I always biked that little extra way and crossed the Steel Bridge instead. This time, it wasn’t too bad. I think it was early enough that it wasn’t that busy yet. 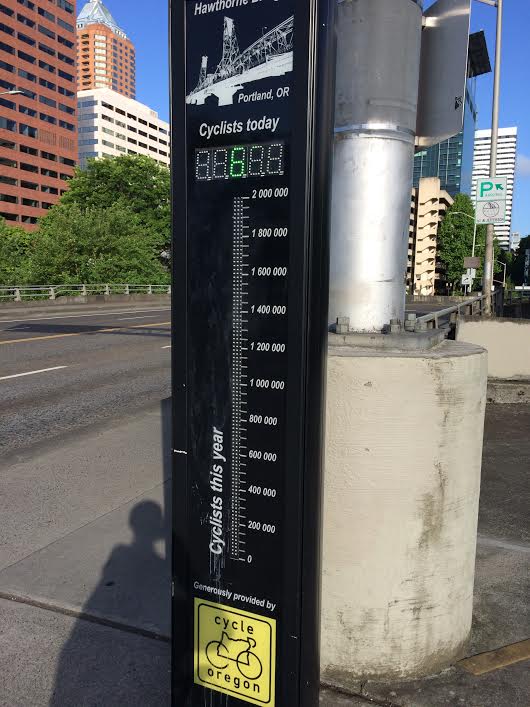 You can’t tell from the picture but the cycle counter was nearing 700 riders for the day by the time I crossed! Here are my stats for the morning: 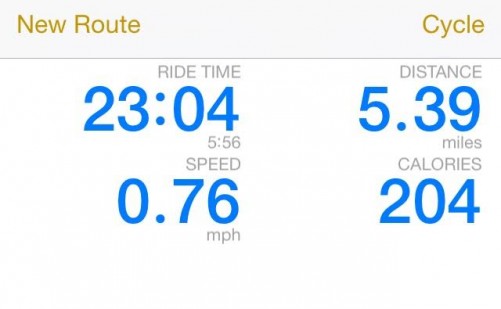 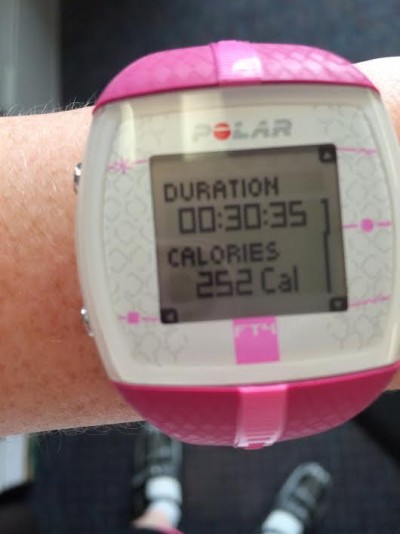 I felt good when I got off the bike at work.

All day I was hungry. It’s weird, it’s not like I burned a ton of calories on my morning ride in but I felt like I was chasing food all day long. I was hungry at least an hour before each snack or lunch time came around.

I spent the majority of my day standing at my standing desk and tried not to sit too much, just to be sure my back was okay for the ride home. When it came time to go home, I was a bundle of nerves and anxiety, which is typical when I first get back into riding.

I biked across the Morrison Bridge and made it across the river in no time. The ride back on the Springwater was pretty easy. I was a tad on the slow side, my sit-bones were SORE (being saddle ready is not something that just comes easily), and my neck and shoulders felt a little tight. 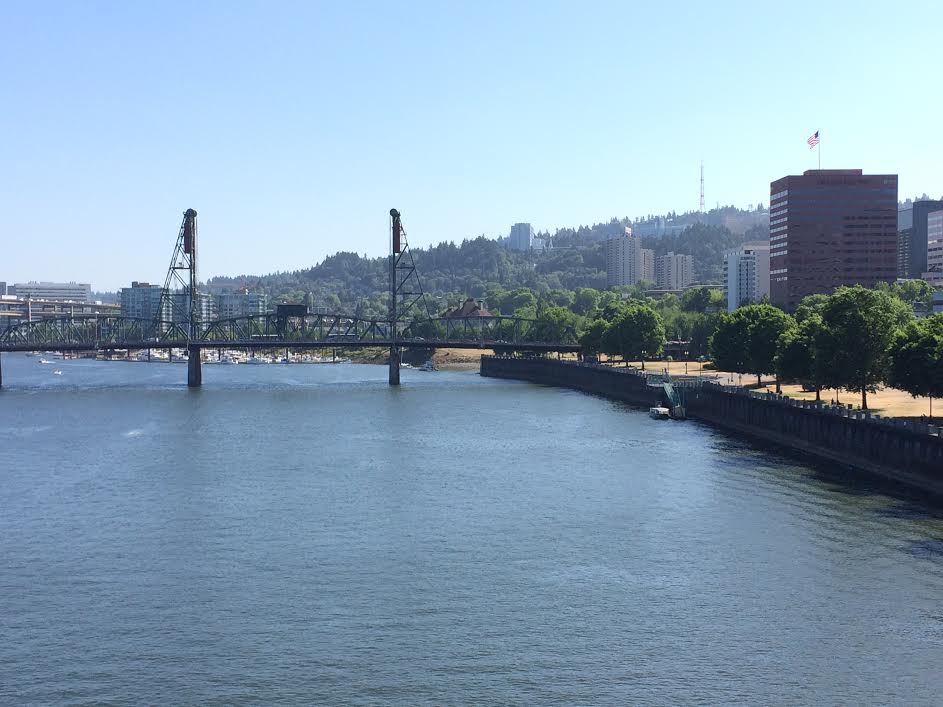 Despite that my knees and back felt decent and I was able to bike back to the car without any issues. It was weird…even though my body wasn’t quite ready for a long ride, my mind was. The closer I got to the car I kept thinking, maybe I should turn around and do it again…Just add a few more miles. But alas, I knew my body wasn’t quite ready for that. So just as I was getting into my groove, the ride was over. 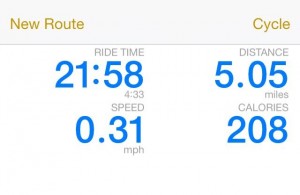 Almost 10.5 miles roundtrip! It was a good decent ride for my first time out. I’m looking forward to doing it again next week and slowly building up my mileage again! 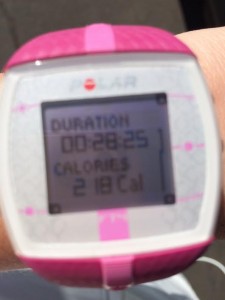 Dinner was leftover chicken with steamed snap peas and a green salad on the side. I iced my back and knees, I took some advil, I did my PT stretches for my back and called it an early night. (Michael was just as exhausted as I was but he did twice the miles as me and they were all hills!) I should have used my foam roller before I went to bed but forgot. The next day my body felt pretty good other than the usual soreness after a new activity. My thighs, neck and shoulders were sore from riding and my hips were a bit tight and achy.

But I would call this a success!

90 Degrees! Woohoo! Apparently the sunshine followed me home from Las Vegas. The weather was wonderful most of last week. I got in another bike ride to work. Man, this might become a weekly thing! One can hope.

It was around 60 degrees when I biked halfway into work last Wednesday. I wore my sleeveless bike jersey and arm warmers and honestly didn’t need the arm warmers. 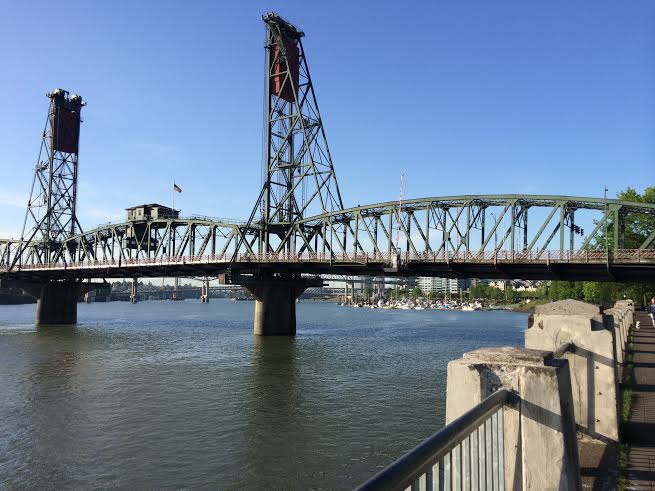 The temperature was perfect. I parked the car a little further away from the Springwater Trail this time around. Each week I’ll park further away and eventually will bike from home (I hope). 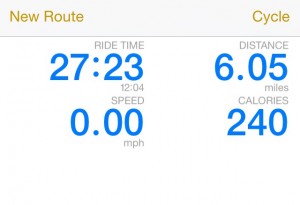 The mileage in the morning was a little more, so that’s cool. My knees were a bit sore and achy for most of the morning. I’m not sure what that was about…was it the run I did on Tuesday? Was I just tight and sore? Did I push it too hard on the bike? (I had to remind myself to slow down several times.) Or was it just a “bad knee day”? Not sure. I iced my knees a few times at work and tried to take it easy. 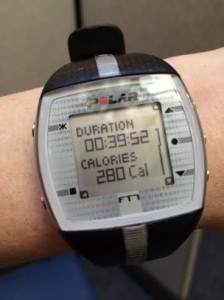 The day got hotter and hotter and it was 90 degrees when it was time to go home. I had 2 water bottles with me and took it easy. But honestly, it’s a short ride back to the car in the afternoon so it’s not too bad. I went slow–the heat made it impossible to go very fast, so that was good!

Even though it was 90 degrees it wasn’t uncomfortable. Thank you Vegas for conditioning me to hot weather! It wasn’t such a shocker. I got back to the car in no time at all. 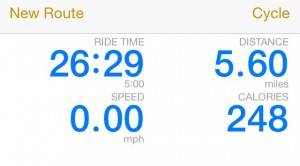 I was happy that I had no knee issues on the ride home or afterwards. My IT Bands were slightly tighter than normal (and they are usually tight) so there was that. I used the foam roller and stretched before bed. I should have stretched more than I did and when I first got home. I REALLY need to be better about that! 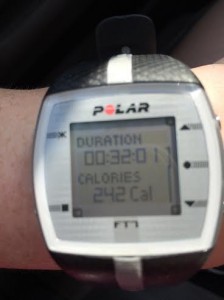 I was famished! Increased cardio does that for me. For dinner I made rice and green beans and curry shrimp. I love this dinner. It’s so filling and it makes me feel healthy and satisfied. Dinner was quick and easy, too. 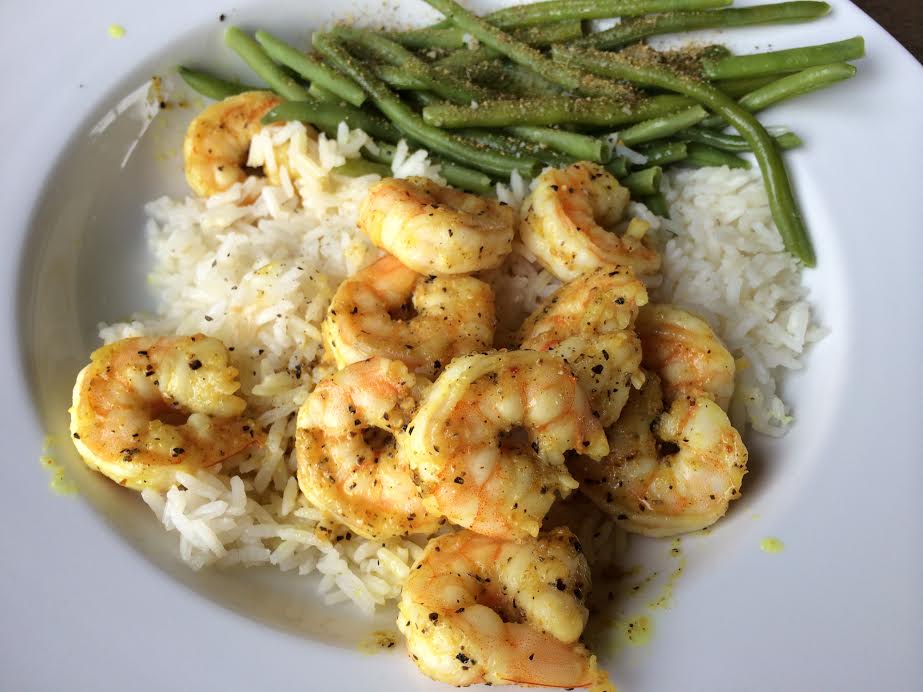 My knees were tight and sore the next few days, which didn’t make me happy. In fact it make me very grumpy and sad that I had a flare up after so many months of doing well. I’m not sure what happened. Maybe it was biking several weeks in a row after not biking for months. Maybe it’s my clip-in shoes (I’ve been thinking about switching back to the shoe cages to see if there is a difference). Or maybe it’s just that I’ve been doing more cardio and less weight lifting like I’d been doing all winter long. That could be contributing to weaker glutes which leads to knee pain for me. I’m going to try a few things and see what helps.