A little while ago I announced I signed up for a 5k. The first running event since I did Hood to Coast four years ago! It feels good to be back at it and to have a goal. The training program I found online seems to be a 9 week plan. I have MORE than enough time train for my 5k. My goal is to get started now, maybe take it easy as I go, and build up to the point where I can maintain the 5k fitness til July. I’m not feeling rushed or like I need to push the training. Also, I imagine that a lot of my running will be on the treadmill at the gym until May-ish, weather permitting! Then I can transition to running only outside. 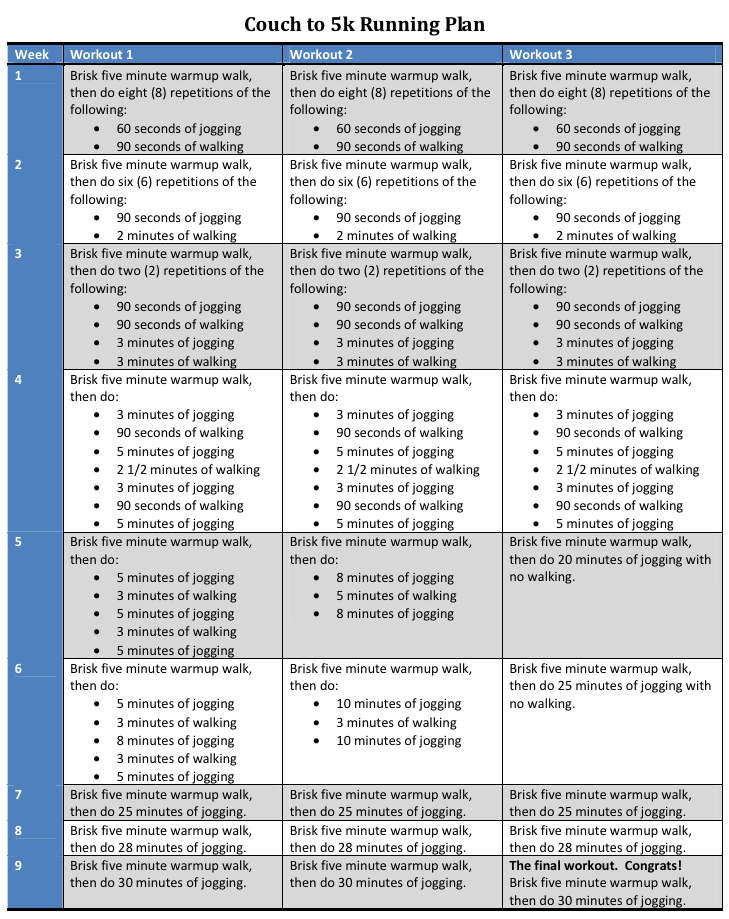 The first week suggested three workouts of 8 repetitions of 60 seconds of jogging and 90 seconds of walking. I decided to follow the advice of a reader who suggested I stick to the plan even if I feel like I was ahead of the schedule. As much as I dislike strict workout plans, I decided to just give it a try. The nice thing was that my usual workouts didn’t change all that much–I just added some running on a more consistent basis!

My workouts for the week were this:

It was a good week. I was happy to be back at running and feeling really good about it! Following the plan was a lot harder than I expected but not in the way you might think. I found that I struggled to do the walking intervals. Besides that it felt like a step backwards in my progress, I also forgot! I get on the treadmill, turn on my favorite music and just run. I kept having to remind myself “oh yeah, I’m supposed to walk”.

The second week changed to 6 repetitions of 90 second jogs and 2 minutes of walking. After going to the Warrior Room after a 3 week break, I was hobbling for days. That put kind of a crimp on my training plan! Here is this week:

I went a little easy on the running this week because my IT bands were feeling a little tight. Not too bad, but enough that I wanted to back down a little. So I might be repeating week 3 again this coming week. I’ve also started going to a massage therapist to work out some of the issues. My insurance pays for 12 sessions of massage/acupuncture or chiropractor services. I found a really good place near the house and the massage therapist I saw was great! She suggested I start using epsom salts, too. I bought some that is specifically for athletes and sore muscles. It has rosemary and mint in it. I love it! It feels like magic on my muscles!

A Walk in the Park