Michael says I need to adjust my expectations for things now that we have a baby. Probably good advice. Over the weekend we went to Hood River with Bella and Logan–our first big family trip. We booked it over a month ago as a getaway, a family trip and an excuse to pick up our case of wine from Cathedral Ridge for our quarterly member pickup. And it took a ridiculous  amount of time to pack everything and the car and hit the road AND we had to pack a ridiculous amount of stuff for one weekend away! I certainly need to get used to THAT fact for sure.

So…four hours later, we finally arrived (it’s only an hour drive from Portland). 😉

We booked a little house in Hood River that was about 5 minutes from a few of our favorite wineries. The location of the house was perfect! So close to wine tasting, close to downtown Hood River and on the Fruit Loop. 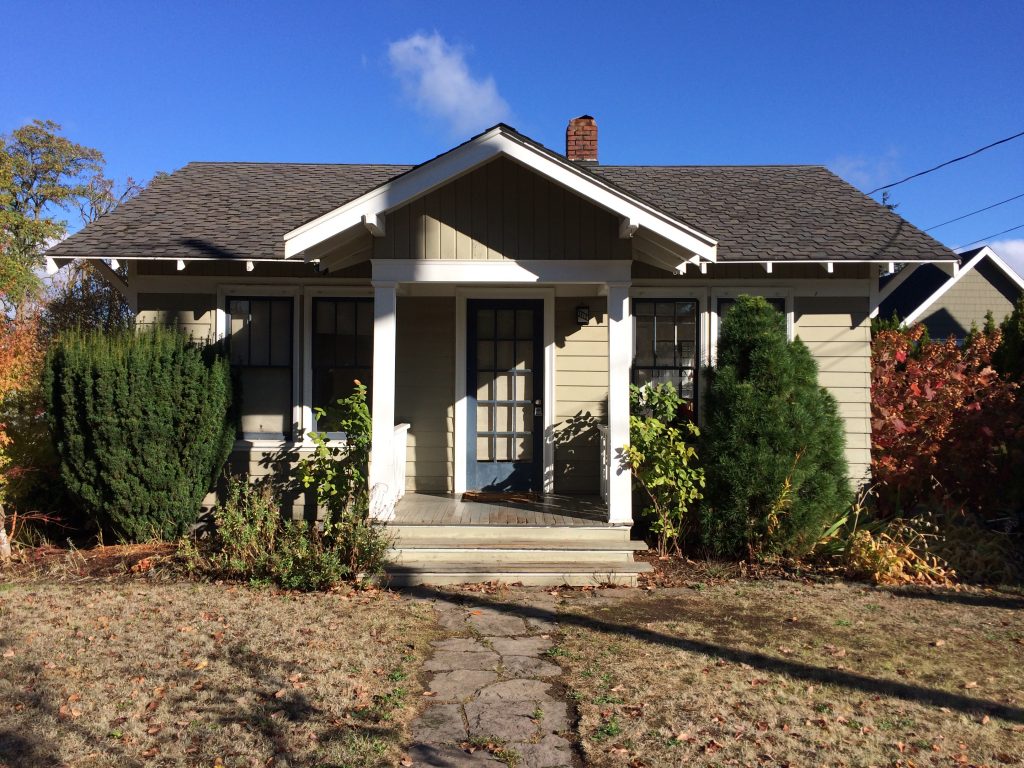 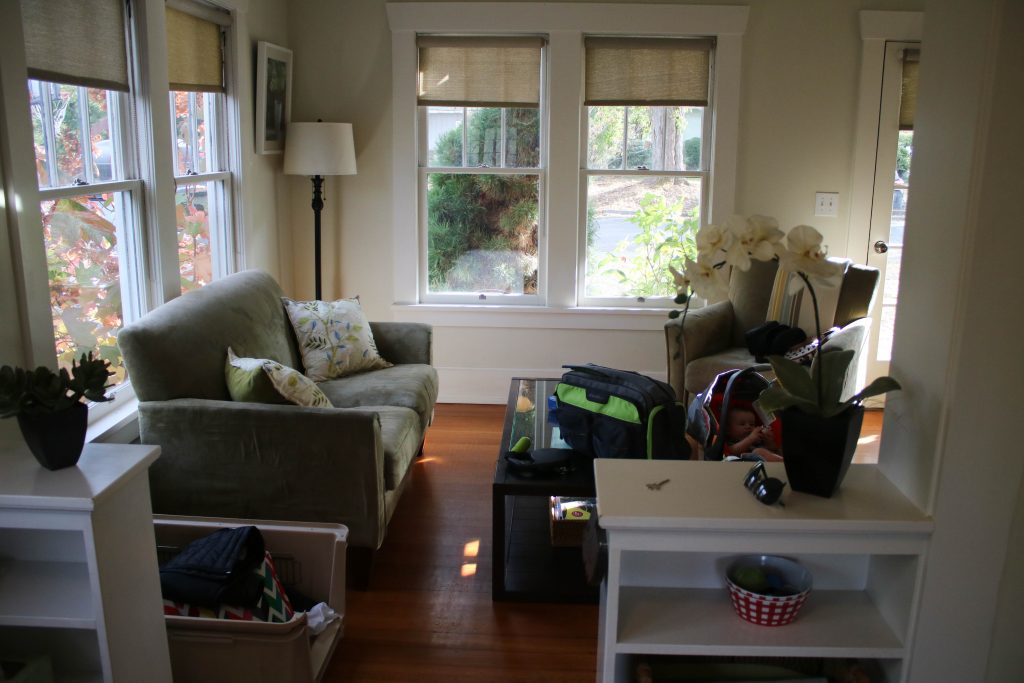 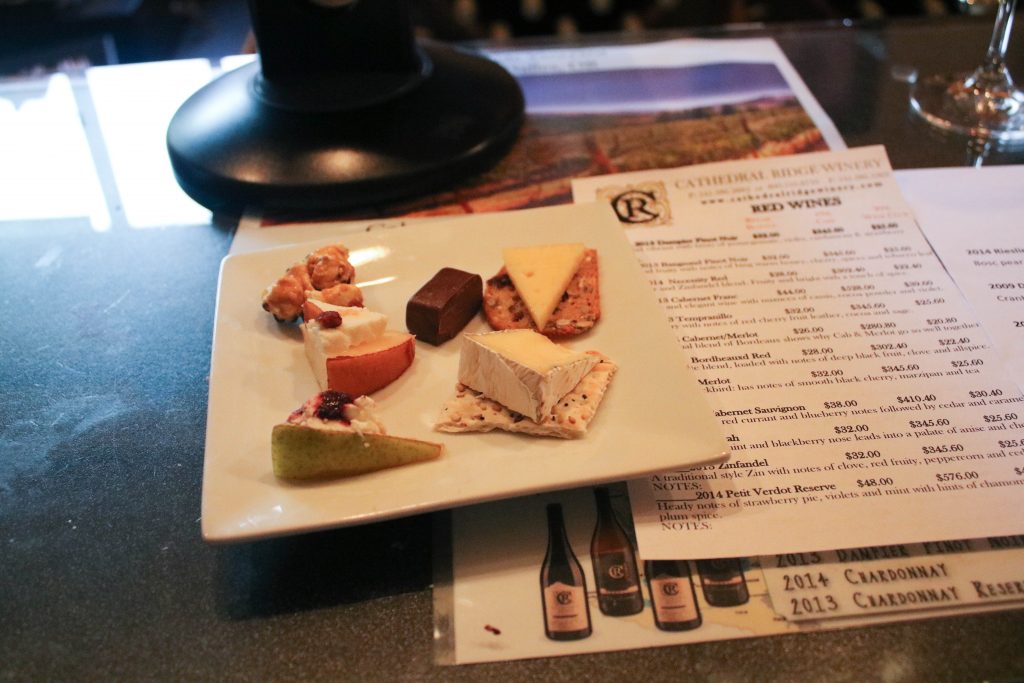 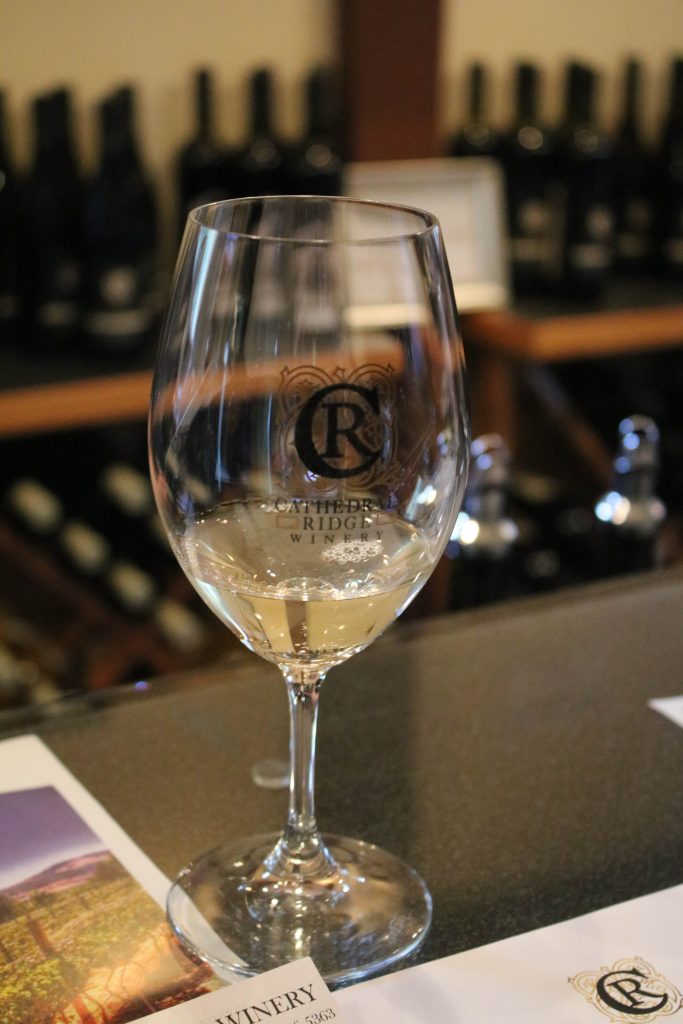 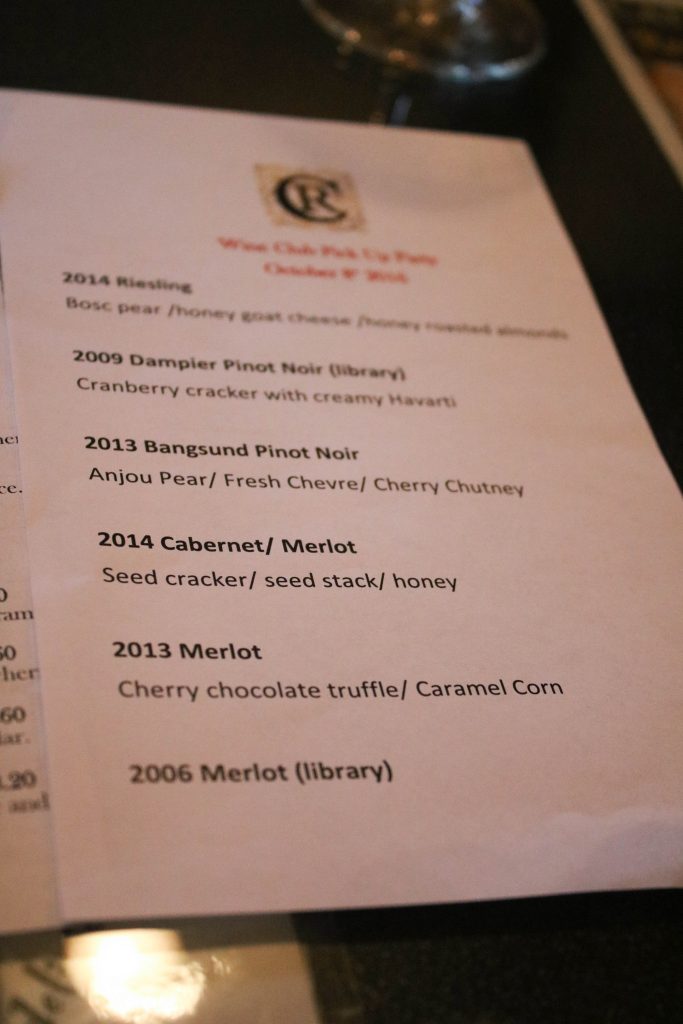 Since we’re members we got to do our tasting in a different room (less crowded–mega benefit right there!), we got a tasting plate to pair with the wines and we could basically try anything we wanted. I’m glad we did because we ended up swapping out the Zinfandel for a Barbera Reserve that was fantastic! 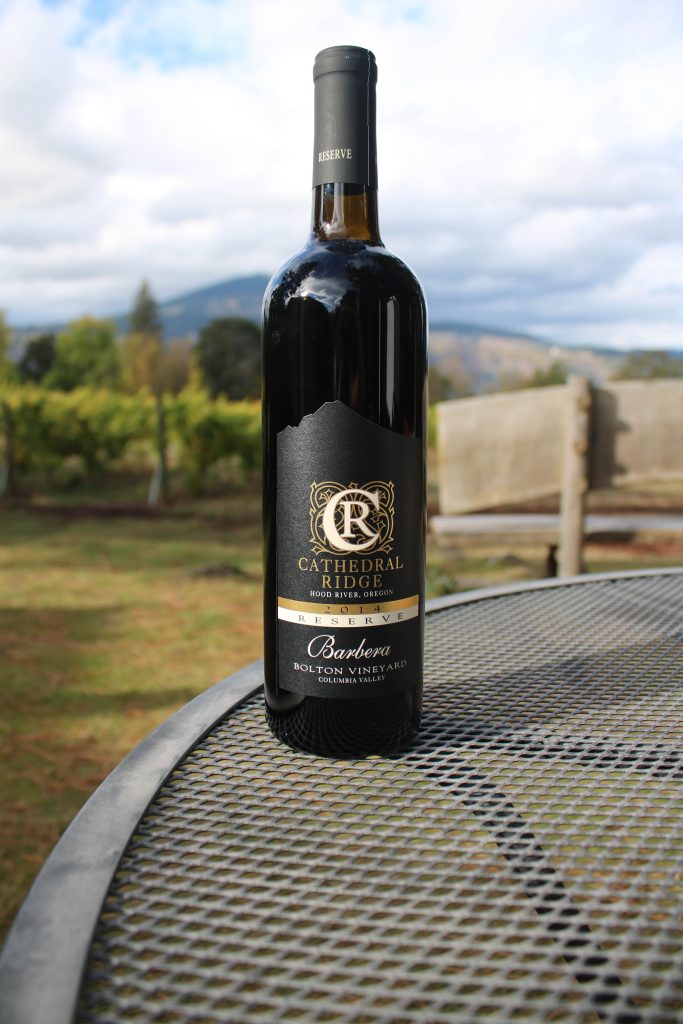 After the tasting we hung out outside for a little bit and enjoyed the early Fall sunshine and warmth. Logan was doing great and not too fussy or bored. 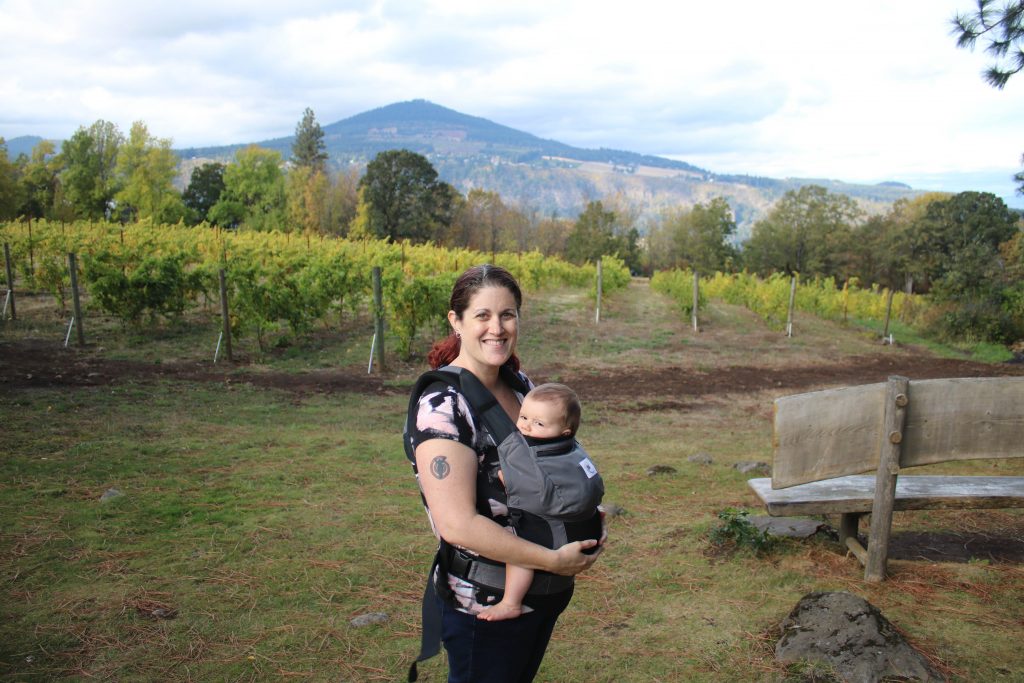 After that we went to the house and got unpacked and settled and then Michael walked a few blocks to pick up take out Mexican food for dinner. 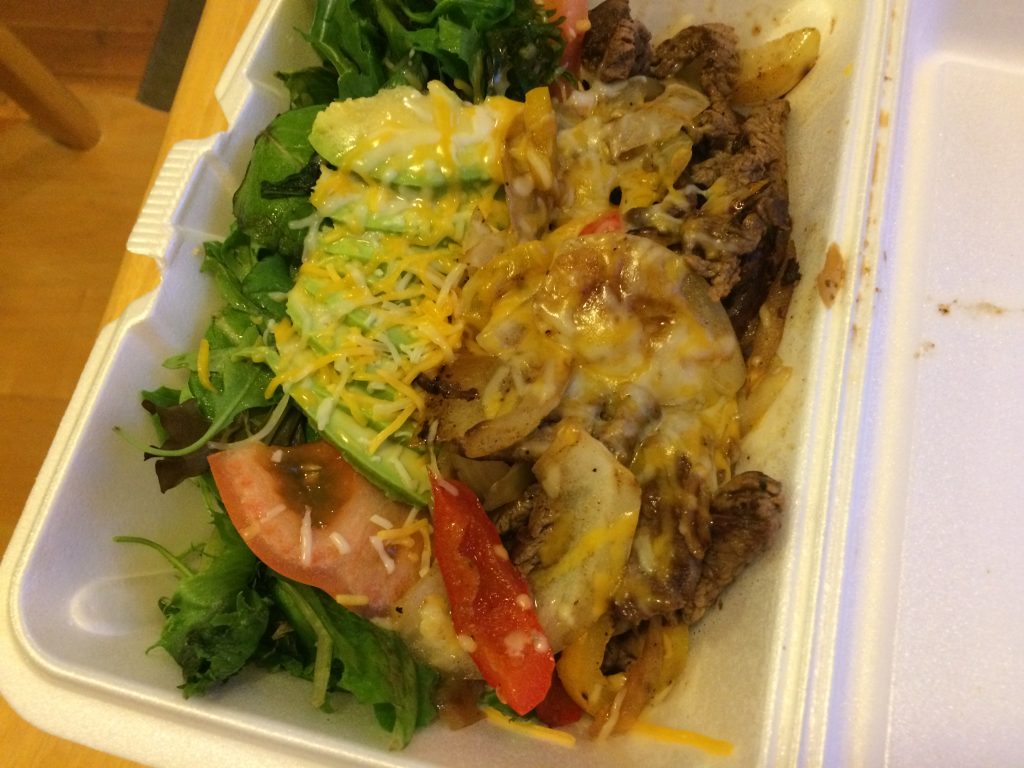 I ate almost half of my burrito but it was really big! The Mexican food was just ok–nothing outstanding but it had good veggies inside. We called it an early night because we were both tired and I had been sick earlier in the week and still wasn’t feeling fantastic. 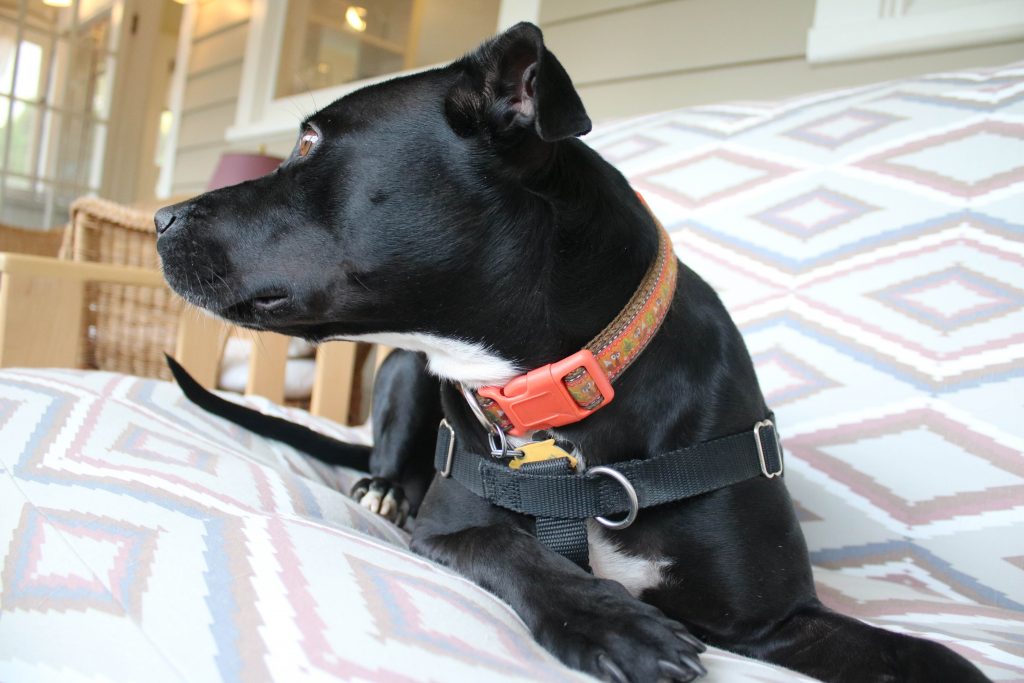 Sunday we got up and Michael made us breakfast as I planned out our day. The Fruit Loop/Wine tasting map that you get anywhere in Hood River is super helpful and makes it easy to plan your day! It’s like a 35 mile loop through the mountains and valley in Hood River with spectacular views of Mount Hood and Mount Adams, the hills across the river and the rolling farms in the area. It’s so scenic and you can do it year round–either in berry season in the summer, or go in the spring to see the wildflowers and be sure to stop at the Lavender farms! Or in the fall where you can either pick or buy apples and pears. 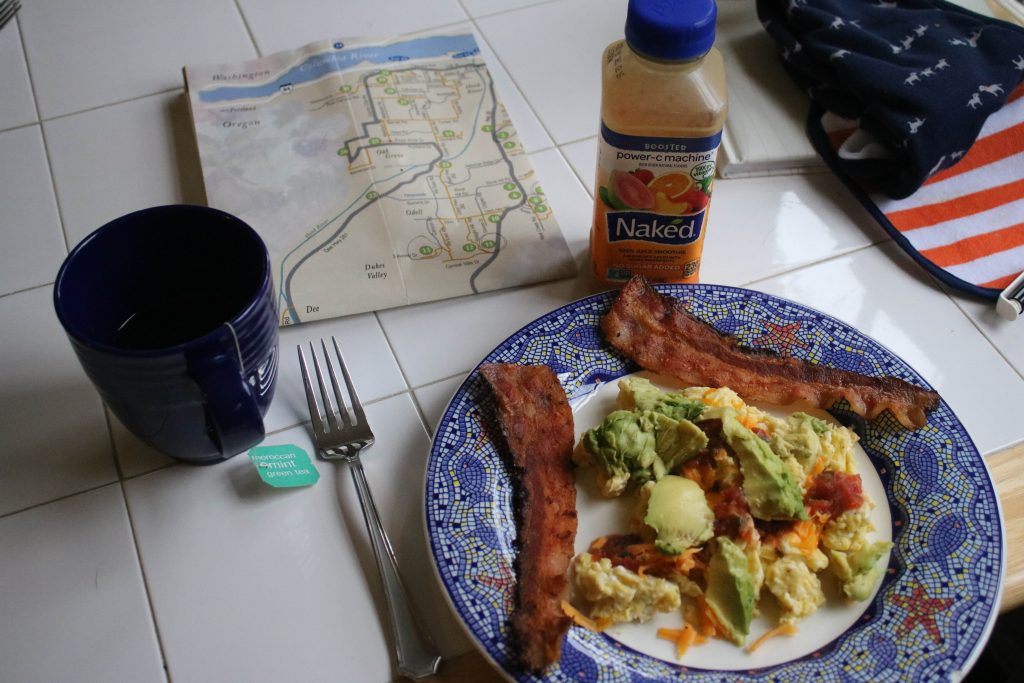 We got an early start to our day. We made it to our first stop at 11 at the Packard Orchard Stand and Bakery.

They had stuff set up in front for the kids, which we of course took advantage of! Logan’s first Halloween! I was so excited to take the obligatory pumpkin patch pictures. 🙂 He was a good sport, even if he didn’t really smile much. He seemed kind of confused and just curious about everything we saw. 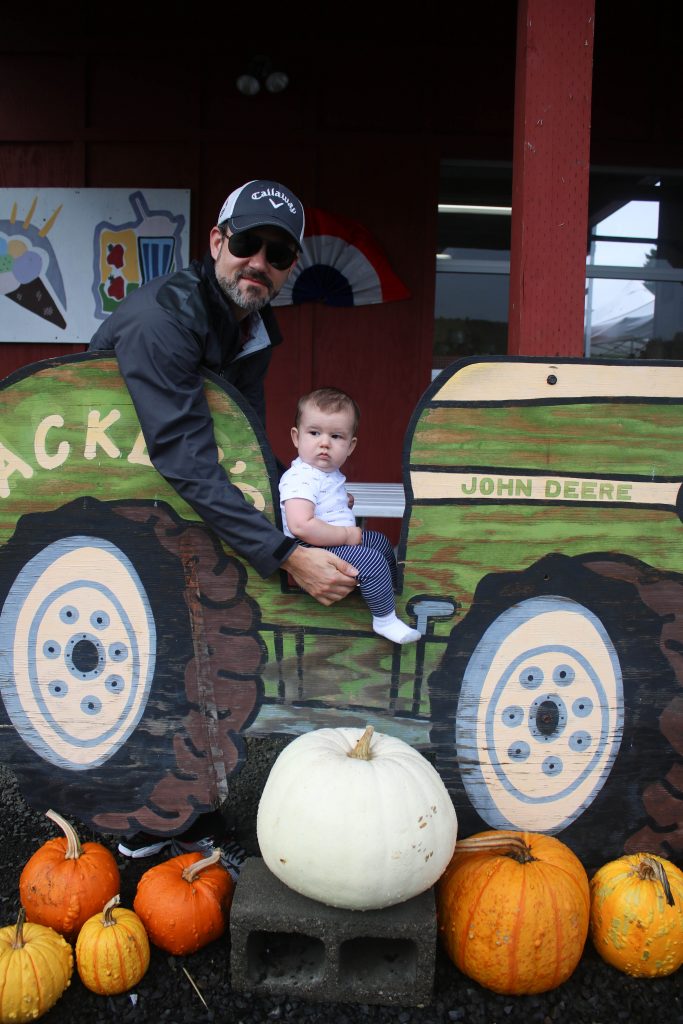 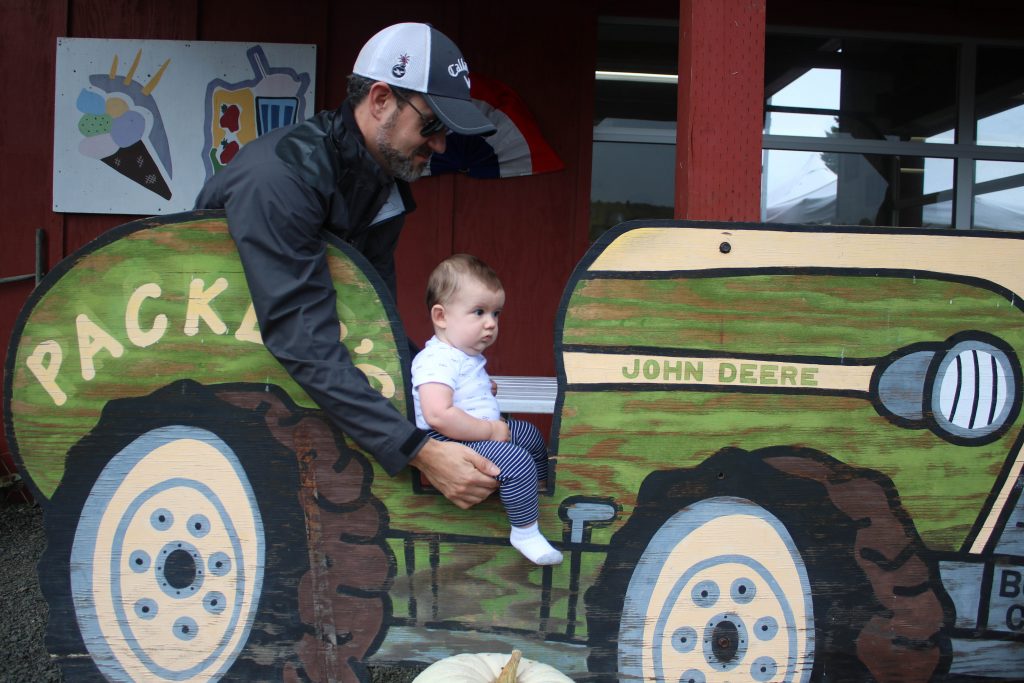 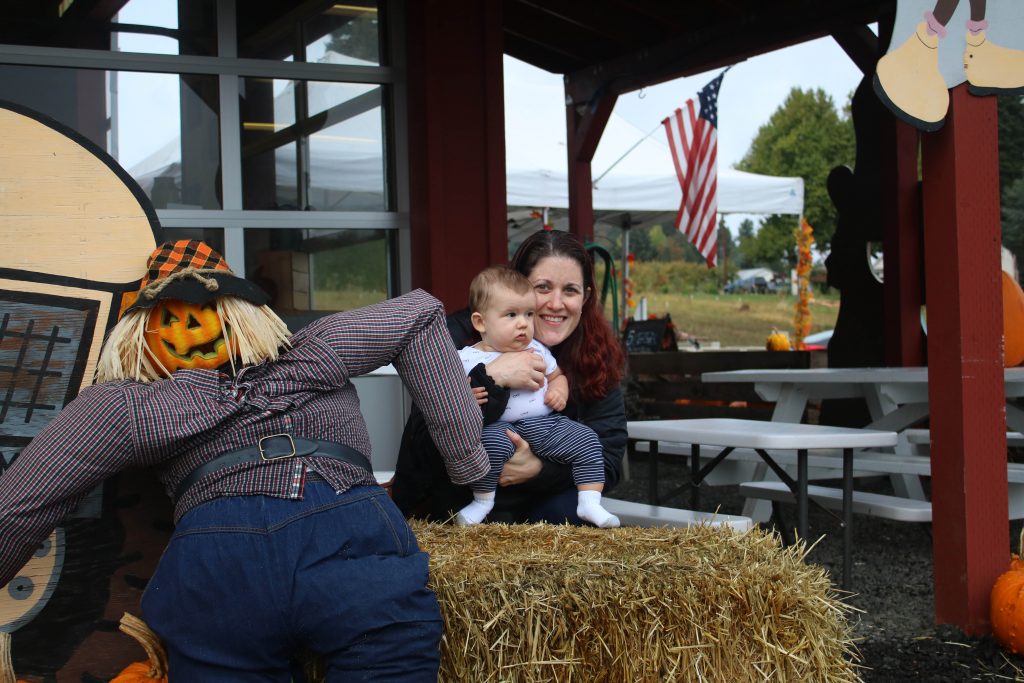 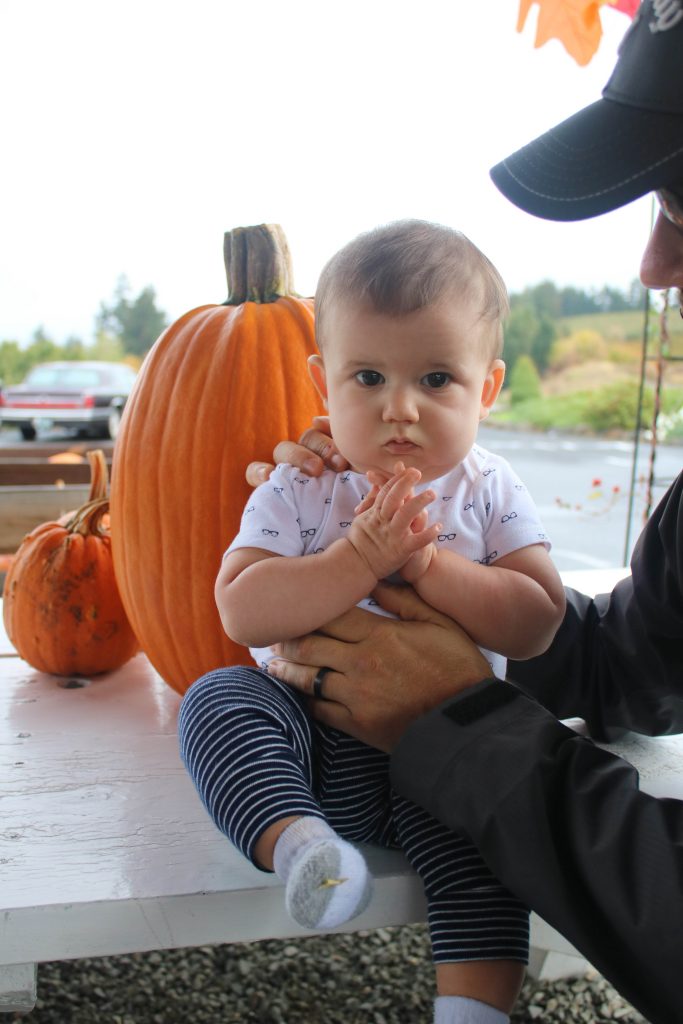 We took Bella with us and left her in the car for the stops along the way that were not pet-friendly. The Fruit Loop/Winery Map does a good job listing out where dogs are welcome and where they aren’t. (Basically if it’s a farm with animals they don’t want you to bring your dog out of the car.)

The Packard Orchard stand had a bunch of samples. I tried a few of their jams and jellies and they had some cookie samples. Mmmm good! 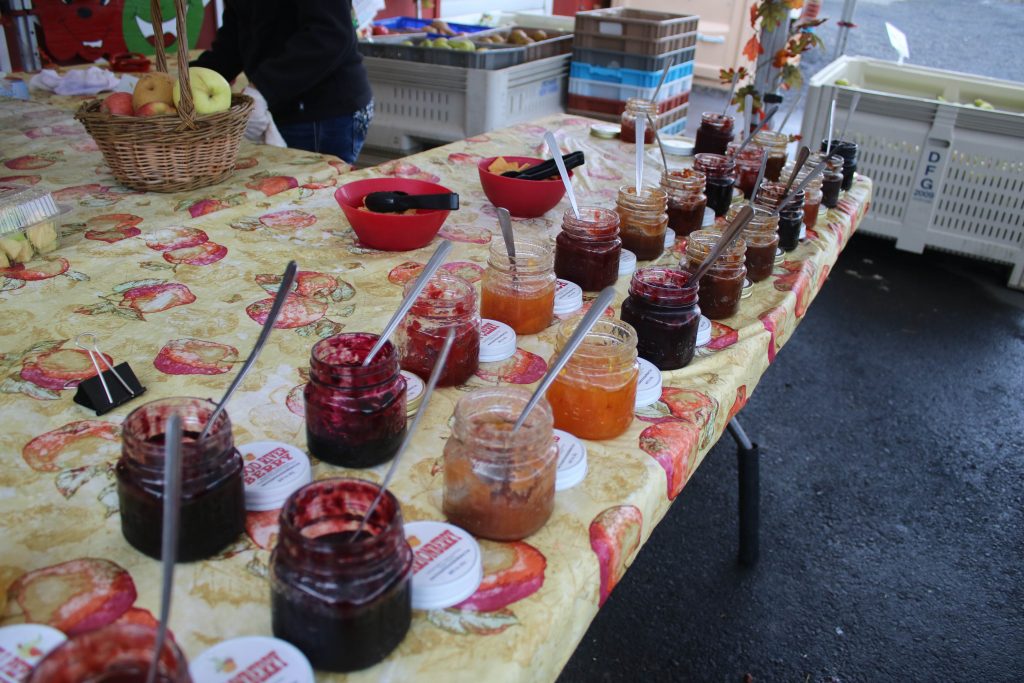 After that we went to a few other fruit stand and then ended up at another Packard Orchard one but this one was bigger and had a pumpkin patch and tons of stuff for kids! Logan was too young, obviously, but we had some fun taking pumpkin pictures! He seemed to like it.

There was a corn maze, too, but it was really muddy so we skipped that. The pumpkin patch looked fun. I’ve never actually picked my own pumpkin. A few years ago Michael and I went to Sauvie’s Island and did a corn maze and it was really fun! When Logan is older it will be an experience we’ll have again for sure. But I do remember that one was REALLY crowded. The ones in Hood River were more low-key. 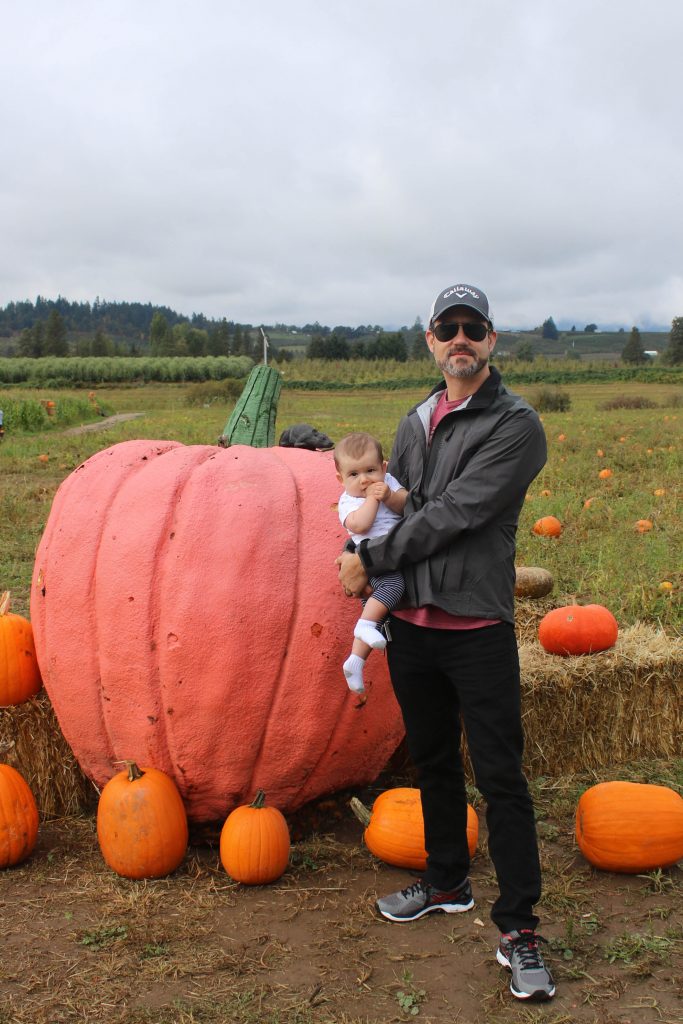 The Packard Orchard had sooo many yummy treats you could buy. Cookies, caramel corn, any baked good you can think of…all made there and from their fruits. I had way too many samples of everything and it tasted so good. In the end Michael and I split this amazing apple cider donut that was made right in front of us: 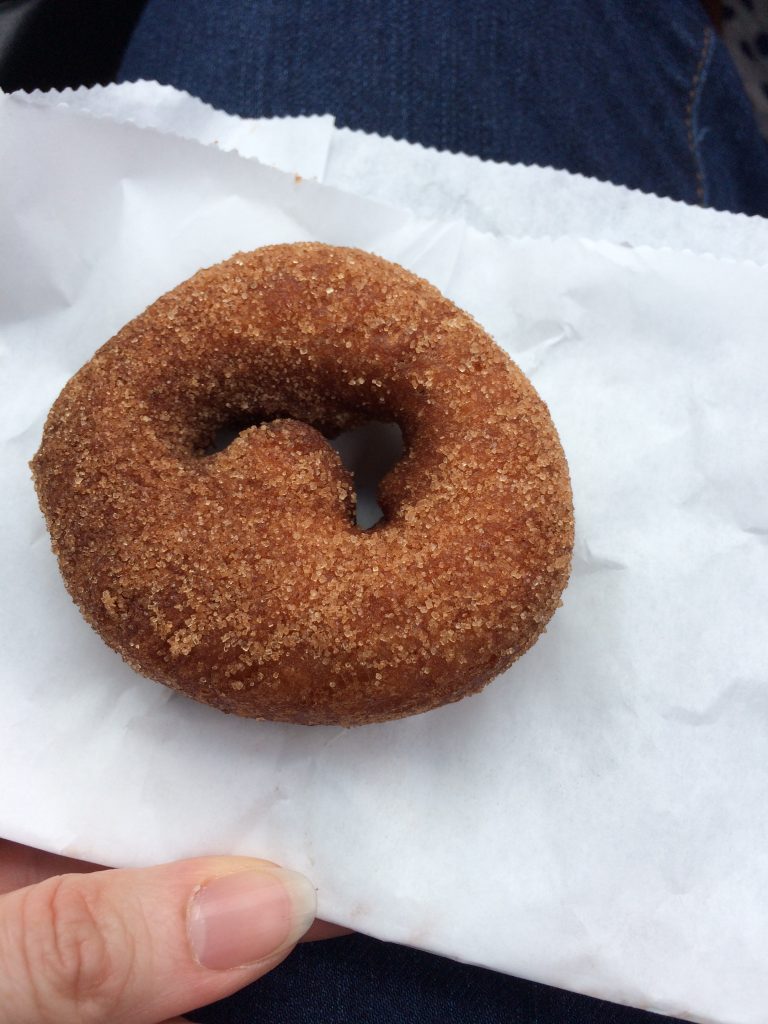 It was so delicious! Michael said it was good but he wished it was kind of greasy and fatty like donuts usually are. I kinda liked that it wasn’t greasy. It tasted fresh and perfect and I could trick myself into thinking it was healthy. 😉

I’ll write more about our outing in the next post.