This weekend was a whirlwind of traveling, family and emotions. Friday we drove up to Seattle for the weekend. Originally it was just for my grandma’s 95th birthday party. But with my other grandma’s recent passing away we were also there for her memorial.

It snowed a little bit in Portland and Seattle on Thursday and Friday but thankfully the freeways were clear enough to drive up there. There was still quite a bit of snow at my parent’s house, though! We stopped for lunch in Longview, WA (got Mexican food and they surprised us with some ice cream at the end!) and then drove the rest of the way to Seattle without having to stop. Logan did great in the car! 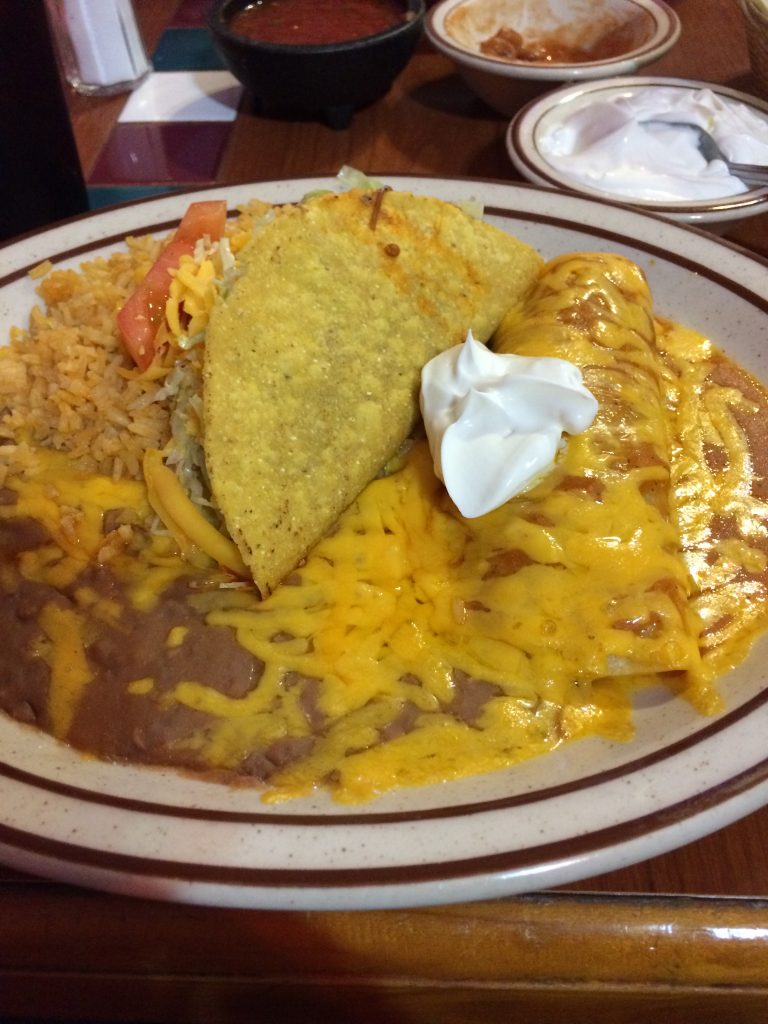 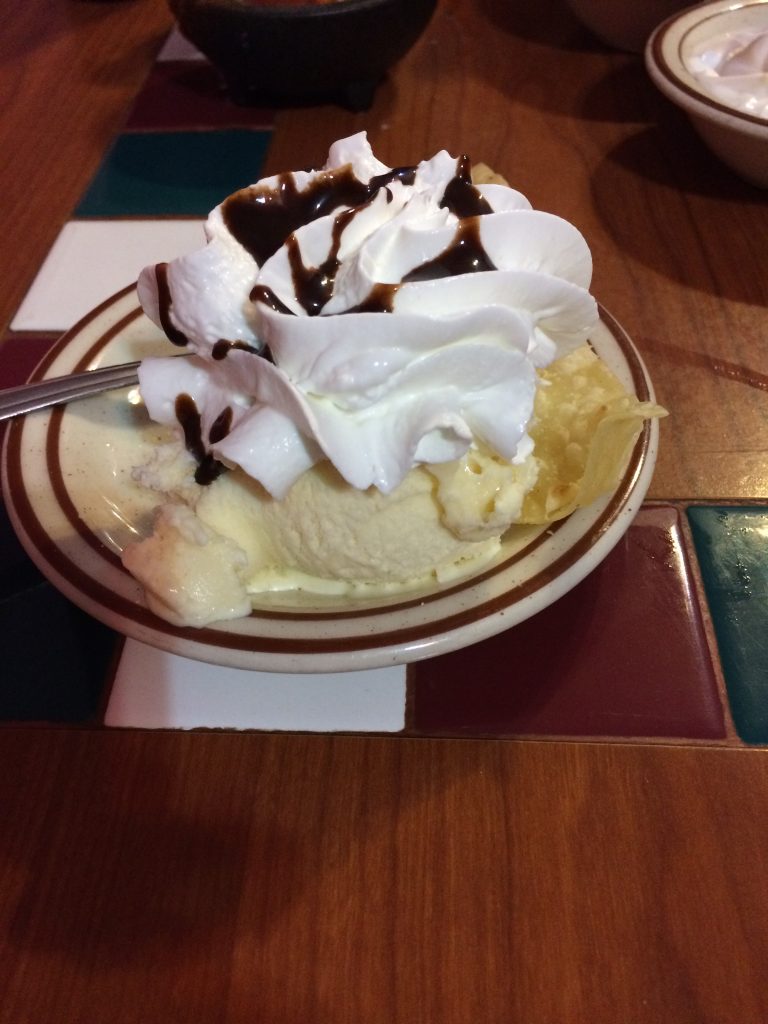 Friday night Michael went out with a friend who lives in Seattle and I hung out with my parents. My brother Andy flew in from Philly for the weekend so it was great to see him, too! 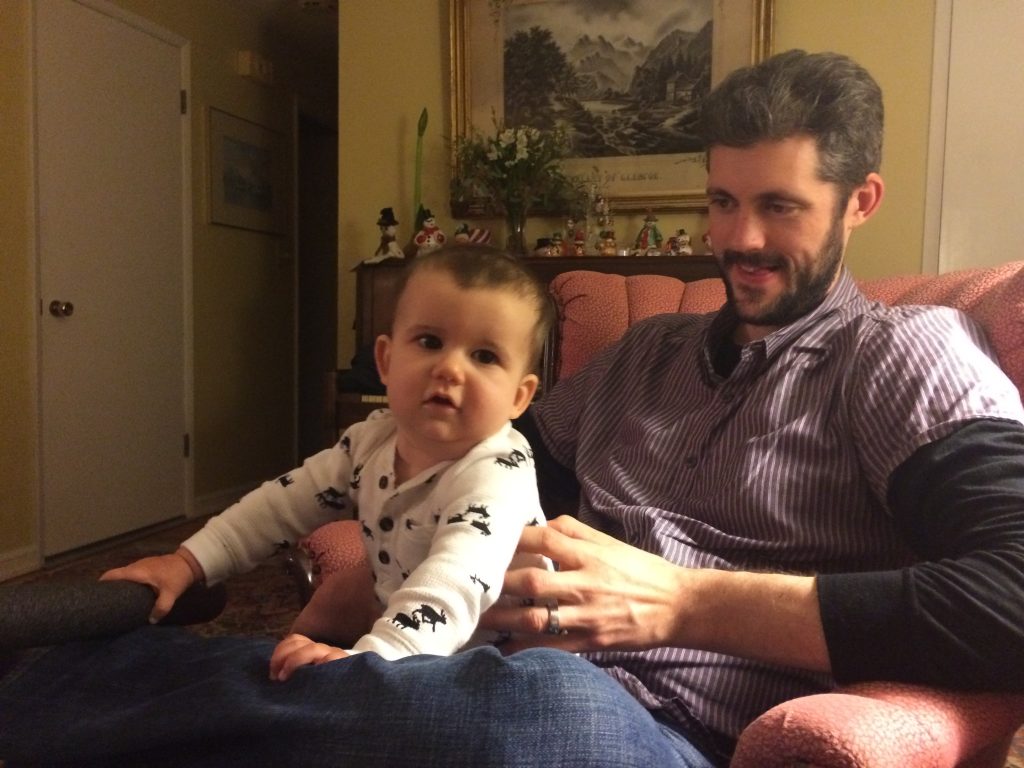 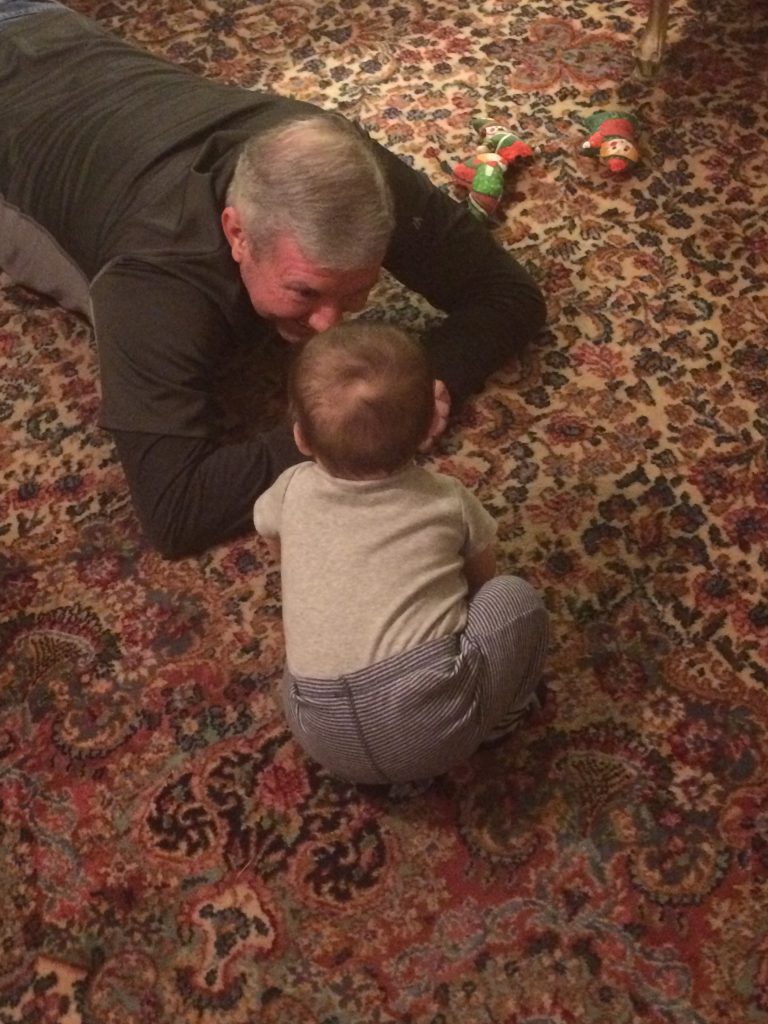 Saturday was pretty low-key. I had intended on going to the gym in the morning but I was still coughing pretty badly from my month-long bronchitis so I decided to skip it and just rest for a few more days.

Around lunch time my aunt showed up to put together Grammy’s flowers for her party. My aunt Sheila used to own a floral business and she does an amazing job with flowers! She got 95 roses for my grandma’s 95th birthday. 🙂

My mom and brother worked on making the snacks for the party and Michael and I drove to Dick’s to pick up burgers for everyone for lunch. 😀

Finally it was time for the party! One of my aunts put together a bunch of old pictures to put on display. I love seeing old photos of my grandma: 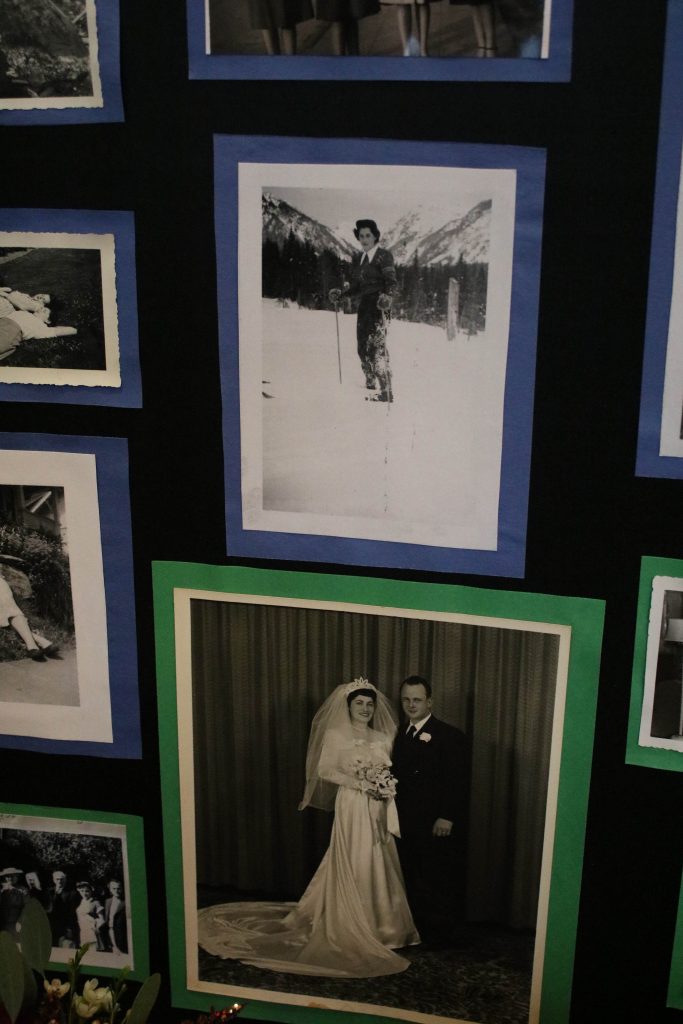 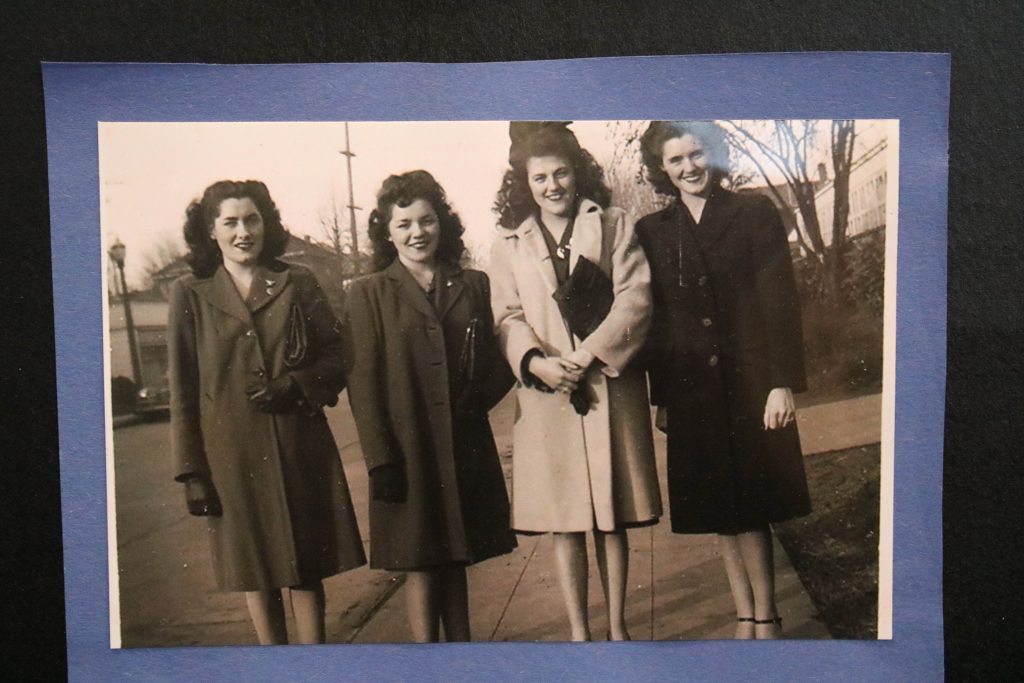 She was so stylish! She looked like a movie star in her old photos. The cake turned out nice: 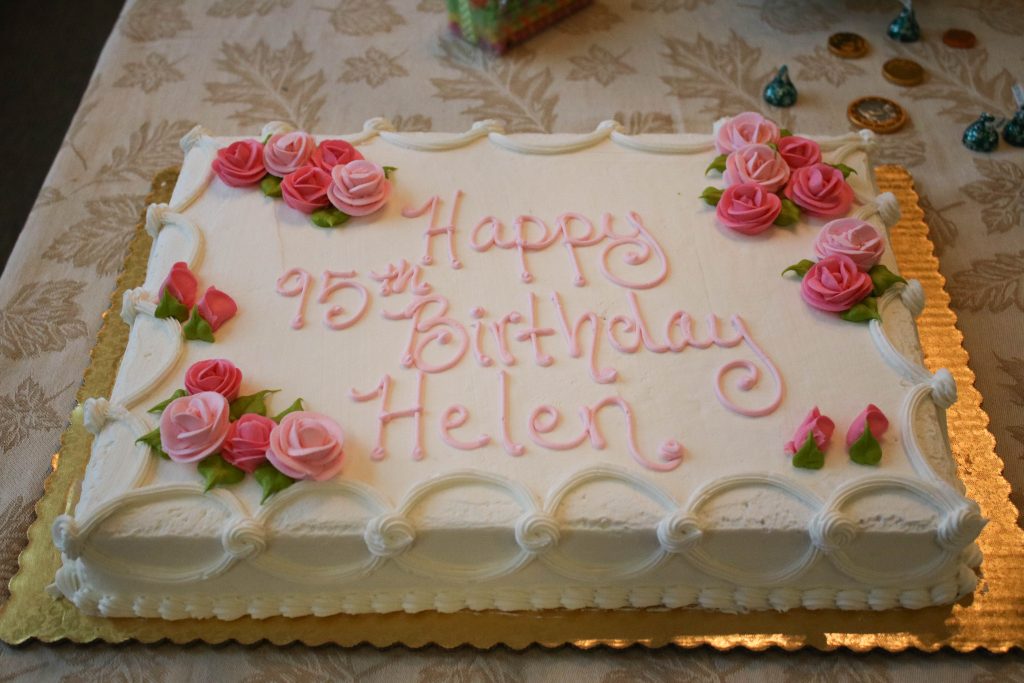 There were red roses everywhere for the party. So pretty! 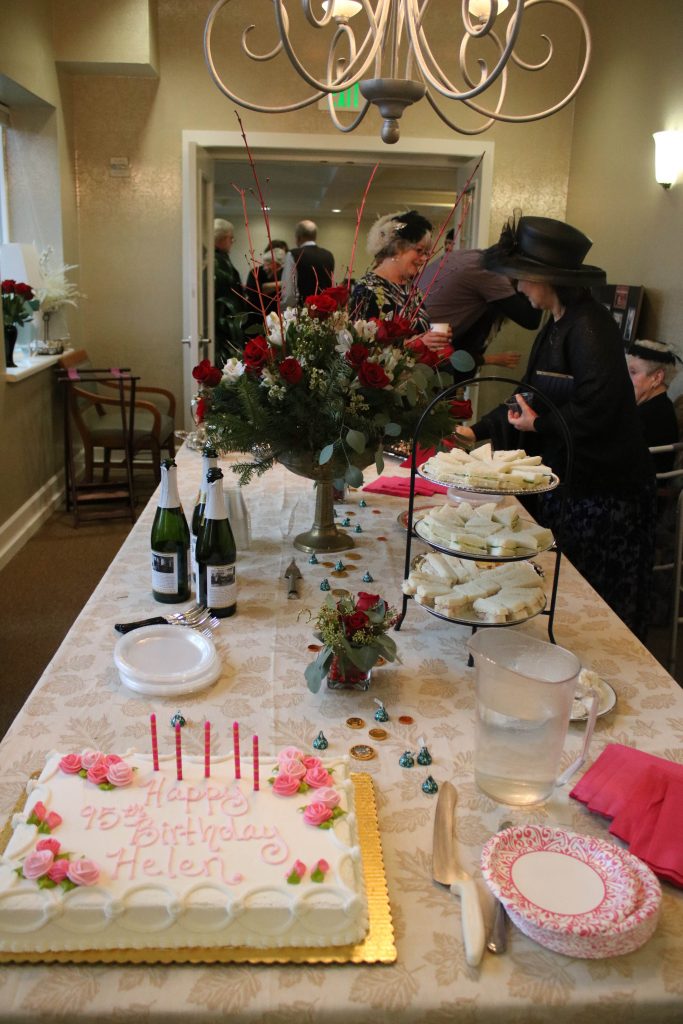 The theme was a tea party! Everyone was supposed to wear a hat. My cousin Anna brought some extra ones, and she has some pretty awesome fancy hats, for everyone. 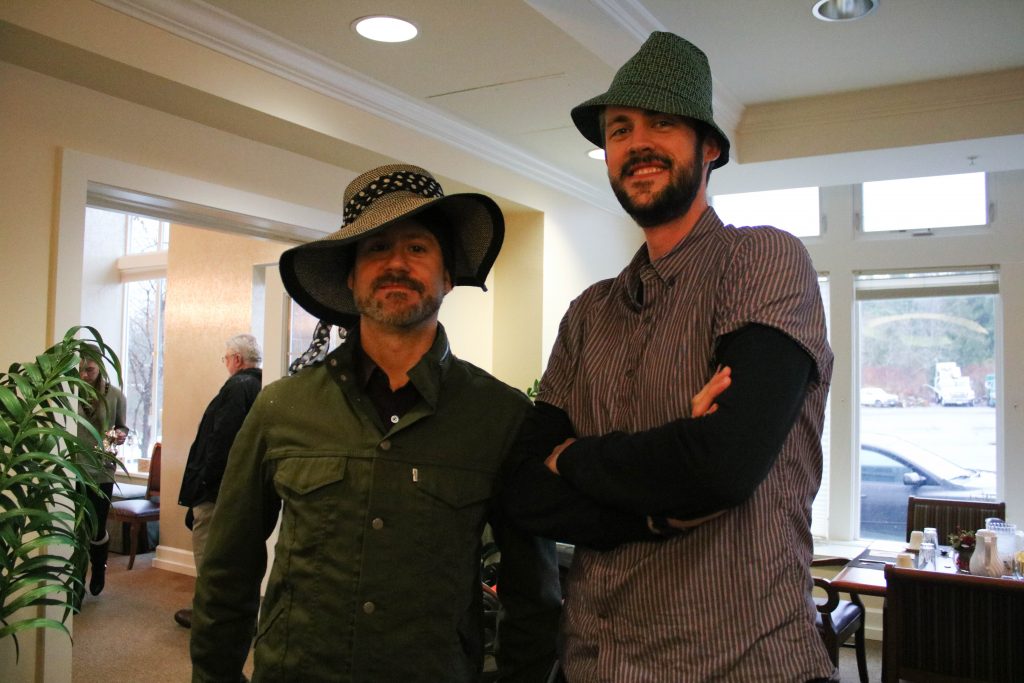 Look at my Grammy sneaking a little bit of frosting off her cake: 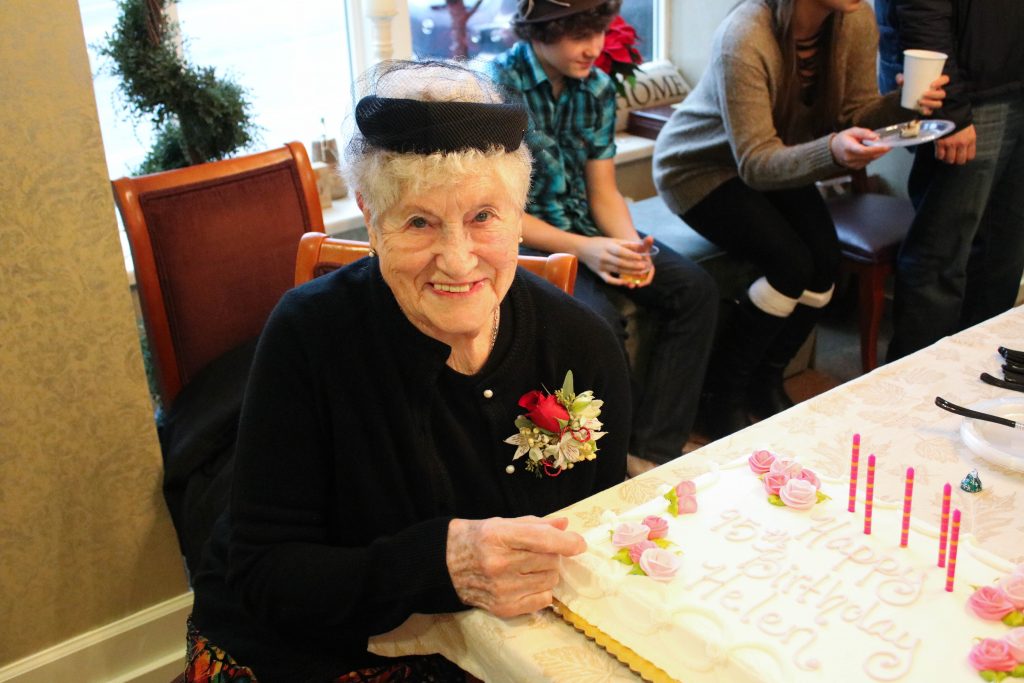 I love how this photo turned out:

Me and my brother:

My aunt made a little speech and then we sang happy birthday and she blew out her candles. She seemed SO happy! 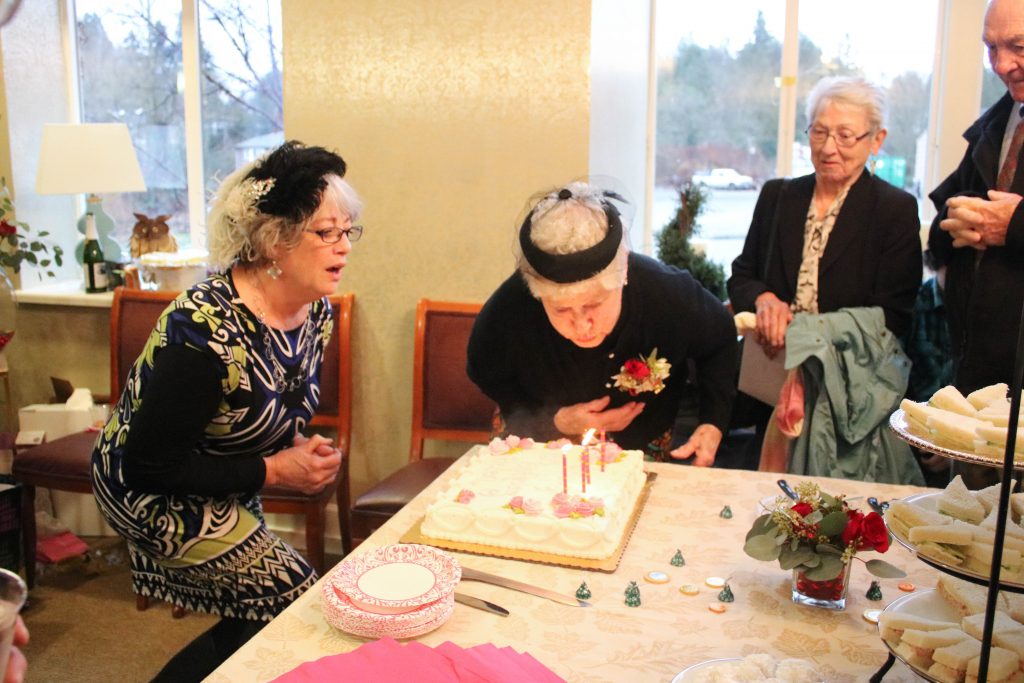 It was such a good party! Everything turned out so nice. There was a bunch of her favorite foods and little finger sandwiches–sparkling cider, tea, coffee. A ton of family came and a bunch of my grandma’s friends and her old neighbors came by. It was so sweet how many people came to wish her happy birthday. 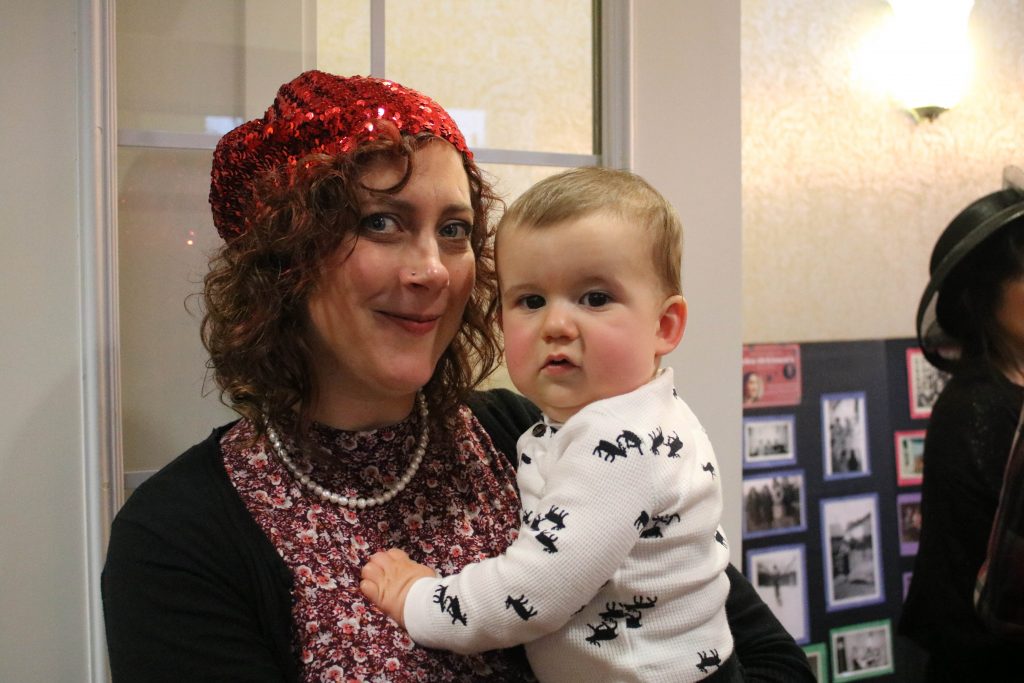 My little dude was a rockstar, too. He got passed around and wasn’t freaked out by so many people. And we got some good photos with his great-grammy. 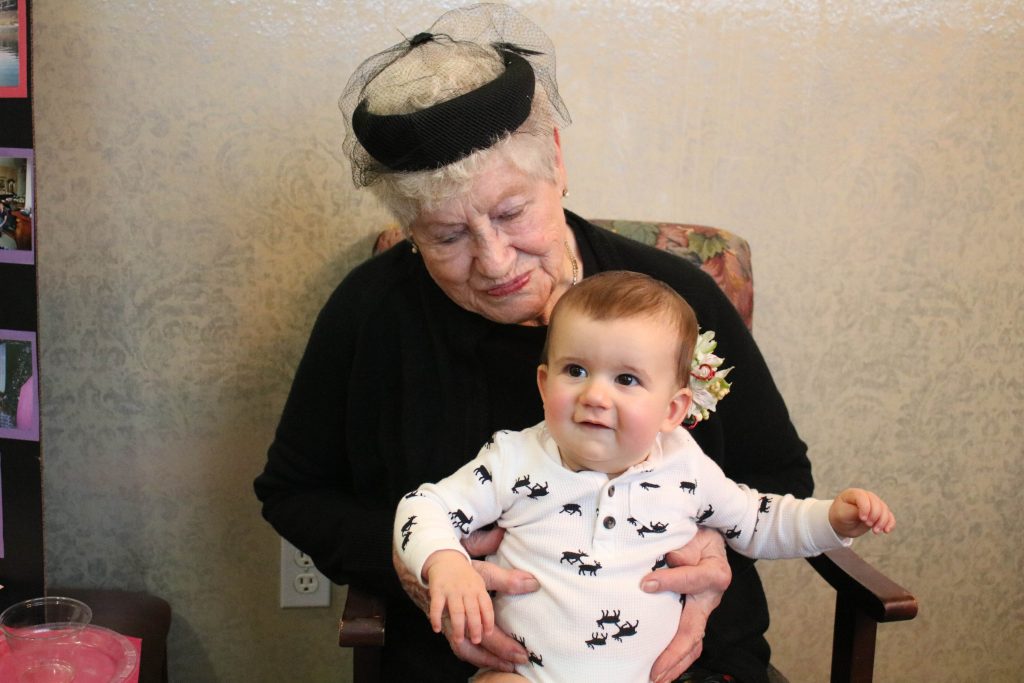 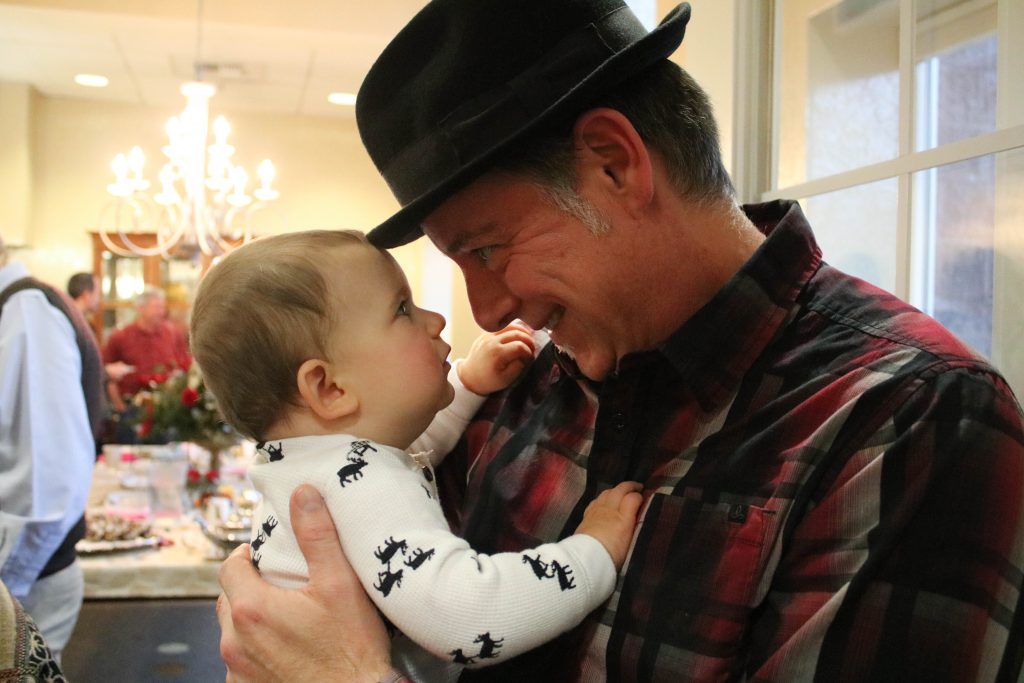 After the party we hung out at my parent’s house with pizza, some beer and sports on TV. 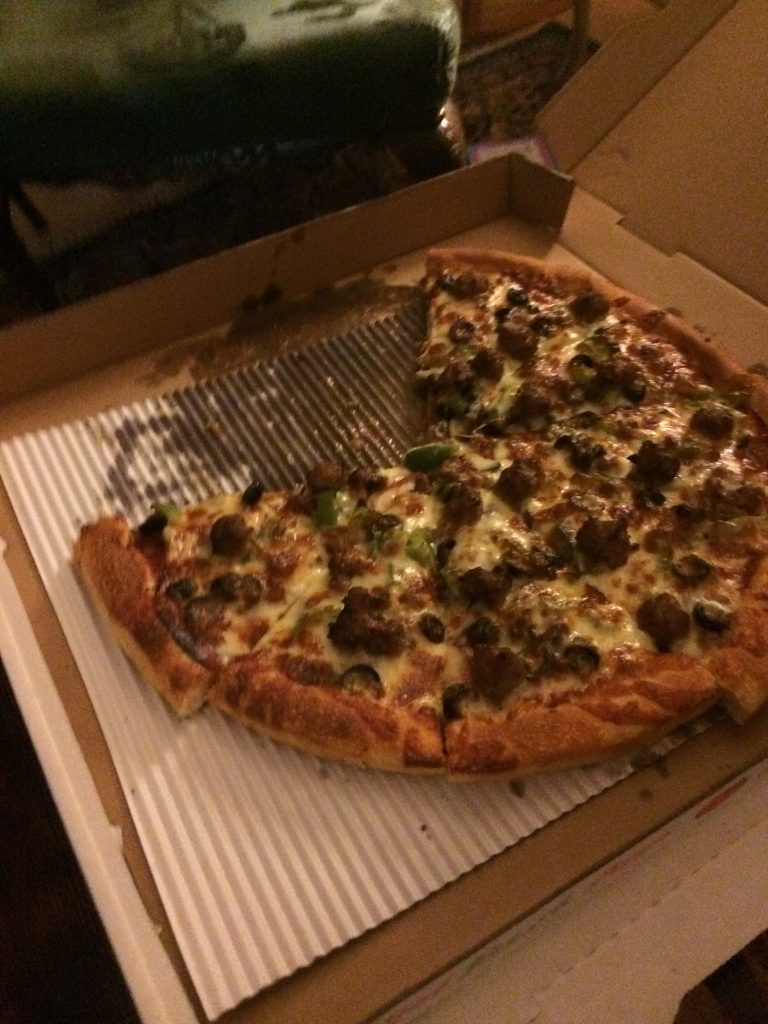 Sunday morning was the memorial for my Grandma Mary. It turned out to be a really, really nice service. My dad’s friend was the officiant and I got to see everyone on my dad’s side of the family. Most of them I haven’t seen since my wedding. 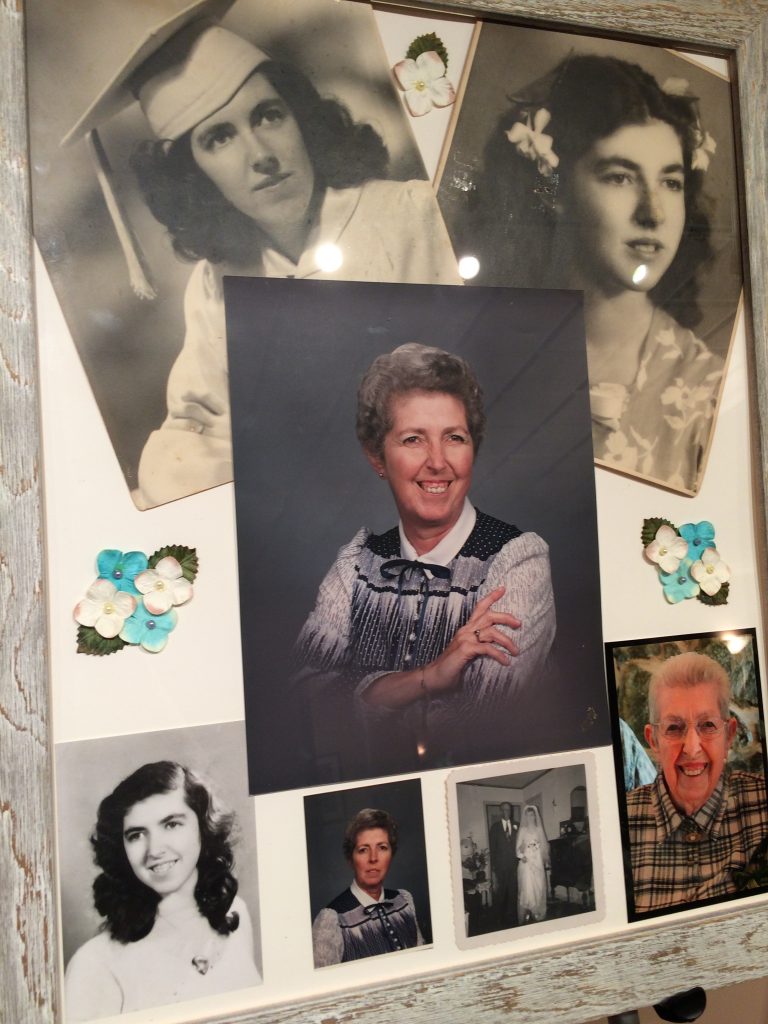 The service was so beautiful. A bunch of got up to talk and share stories and memories of her. I’m really glad I had typed up what I wanted to say so I could just read it because I don’t think I could have gotten through it otherwise.

After the service there was a little reception with lunch. We got to talk and catch up and spend some quality time with family. My aunt Chris had this book made of old photos and I loved looking through it–funny how much my brother looks like my dad! 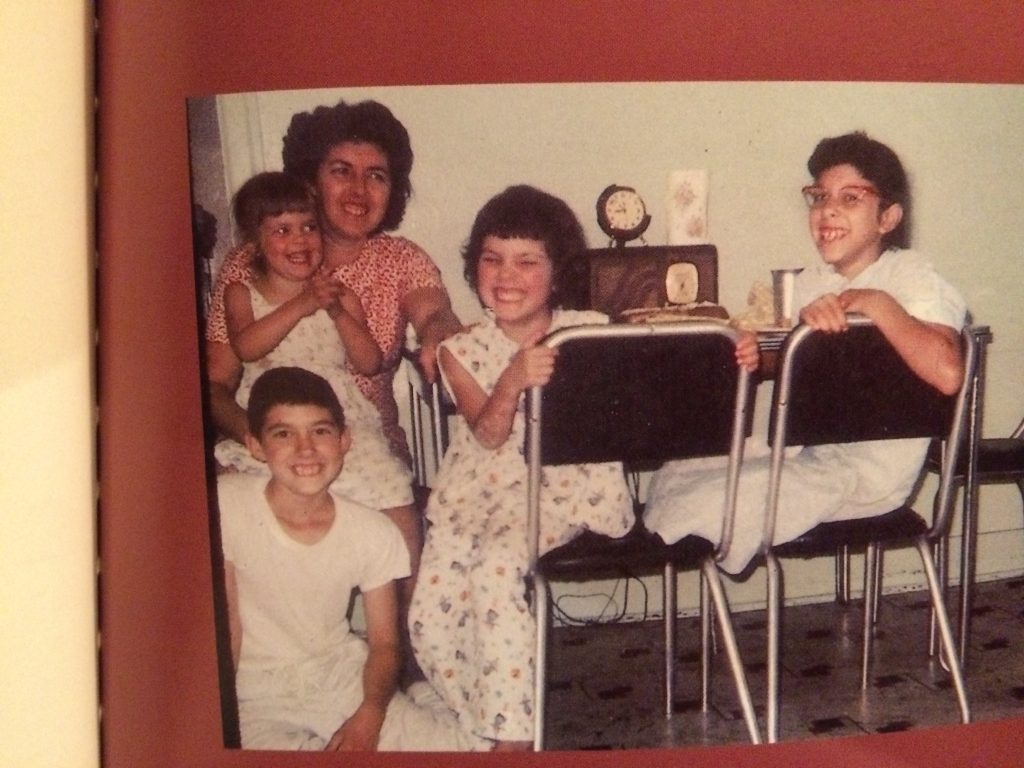 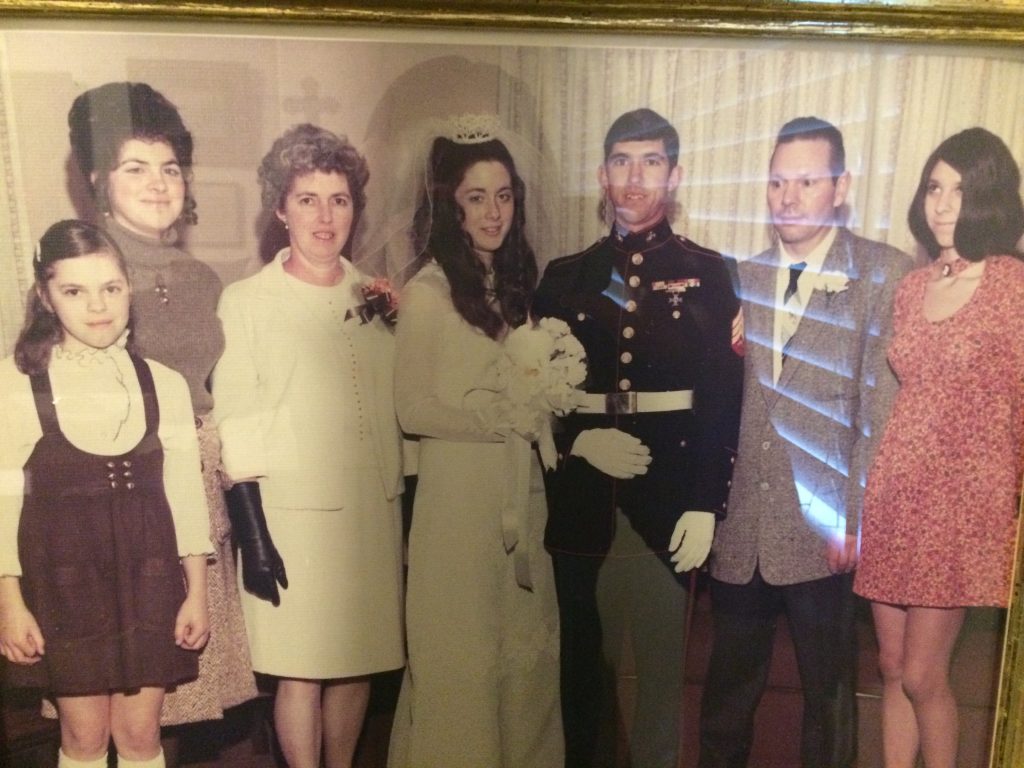 We had hoped to hang around a little bit longer and spend more time with everyone but unfortunately Logan was coming down with something and had his first fever on Sunday. It got pretty high and we wanted to get home to get to the doctor before they closed. So we said our goodbyes and hit the road. 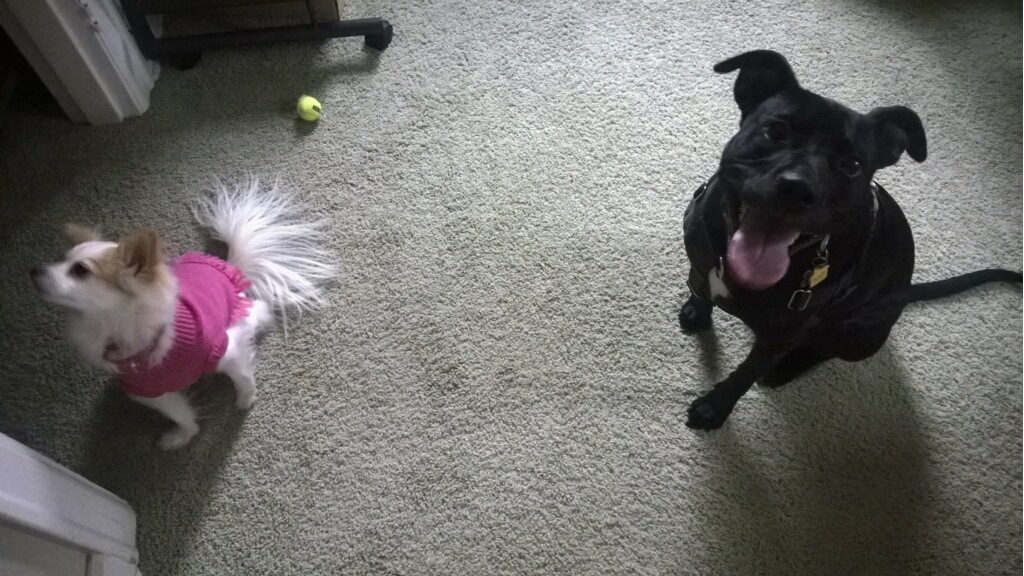 We picked up Bella at her foster mom’s house (she was so happy to have a little weekend party of her own!) and then I took Logan to the doctor and got him some medicine. He’s doing better now but it was kind of scary when his fever got so high.

It was a wonderful weekend. Ups and downs, happiness and sadness. It was so amazing seeing both sides of the family and spending so much time with them, but also bittersweet because part of it was for saying goodbye to my Grandma Mary.