There are parts of Portland that I rarely go to. Portland as a city isn’t that big–but there are tons of different suburbs here so it makes it seem like a bigger city. If you’ve never been to Oregon, or the Northwest really, you will be blown away by the environment. What I hear most from out-of-towners that come to Oregon for the first time is this: “You have so many….trees…..it’s so….greeeeen!”  I’ve lived in the Northwest my whole life and so I am totally used to and comfortable with my surroundings. I find it odd that people comment on our trees. Don’t you have trees where you live?????

There are so many cool places to see in Portland. Downtown is one of those places. But since I work downtown, I loathe going there. Whenever my friends want to meet for happy hour, I suggest SE Portland. I just want to get on the other side of the river!! As soon as possible. Once that 5 o’clock bell rings, I’m out. I don’t understand the attraction to downtown because I’m there 5 days a week. And I never, ever want to go downtown on the weekends! I’m weird, I know.

As a result of this loathing of anything down there, I never go to the Pearl District. If you’re not familiar, it’s a yuppie, up-scale, foodie-heaven. There a gazillion great restaurants that are downtown and in the Pearl District that I just never go to because of it’s location. I sound like a snob, I know, but parking is a pain, there are so many people, traffic sucks, the list goes on.

“Let’s be frank, the Pearl District is a yuppie nightmare crawling with Nike employees paying $400,000 for lofts and thousands more for tiny dogs to decorate them with. Pearl District people are, for the most, shallow, art-collecting dorks with big paychecks and tiny personalities.” (source)

I had to chuckle at the quote. In fact, I’m still laughing as I reread it!

Thankfully, I gave the Pearl a chance recently and was very happy I did so. Michael bought a Groupon for a new upscale bar called Brix Tavern. I’d never heard of it before he bought the deal. And of course we waited until a week before it was set to expire to venture over there and check it out. 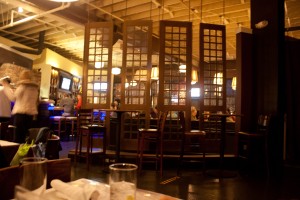 We liked Brix so much we went back within a week!

The first visit was just Michael and I. We decided to have a little date night. It turned out that on Mondays they have happy hour all night. It seemed like a shame to waste the astonishingly cheap happy hour prices so we decided to do that and save the Groupon.

I loved everything I ordered. The first thing up: the Lemon Basil martini. It was pure heaven. 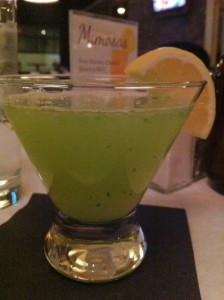 Next I ordered the chicken tacos off the happy hour menu. They were small and there was absolutely nothing special about them–it was rotisserie chicken, cabbage and some sauce–but they were probably the best chicken tacos I’ve ever had. I loved every single bite.  The salsa was not needed one bit. 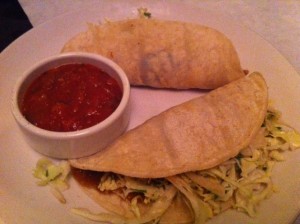 The rest of my dinner, courtesy of happy hour, was soup. It was tomato basil soup with a sweet onion puree. I swear there must have been an entire case  of cream and a stick of butter in that soup. It was so creamy and decadent. It was by far the best tomato soup I’ve ever had at a restaurant. 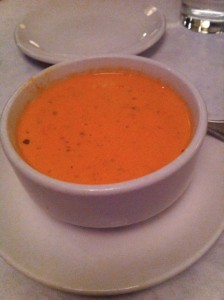 What did Michael get? You guessed it: a burger. Duh. He said it was good but overcooked. He asked for medium rare and it was more done than he liked but he still liked the flavors. 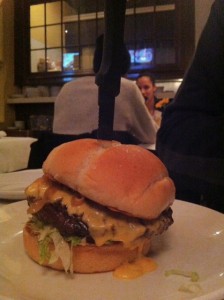 We both remarked that it was outstanding happy hour food. A week later, we were back! This time, with friends. Our friends Stu and Christi met up with us one night after work for dinner. They’d never been to Brix before. It was so good to see them! Stu is one of the wittiest guys I’ve ever met and Christi is an amazing photographer. (She took the photos at Michael’s work party.)

Christi and I had planned on getting together for a mini photography lesson but she had to go to China for work. We decided to just get together the four of us instead. Christi gave me some great pointers for my camera and my new fancy flash. I can’t wait to experiment!

It’s funny–Christi ordered the exact same menu that I ordered the first time I went to Brix — the lemon basil martini, chicken tacos and soup. She loved it! She said the chicken tacos had a sweetness to them and she guessed ginger. I bet she’s right. 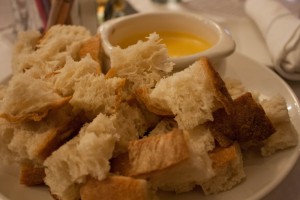 We all shared an appetizer of the fondue. The cheese was really smoky.  I enjoyed the coconut, lime and basil martini this time. 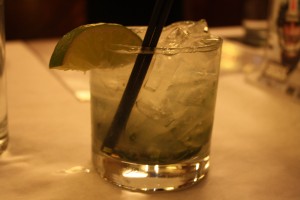 It was good but more lime-y and not enough coconut. I went back to the tried and true lemon basil. 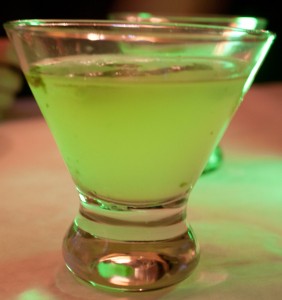 My entree was partly healthy and partly decadent. I got the roasted turkey breast with creamy polenta and vegetables. Did I want the seafood and truffle mac n’ cheese? Oh yeah. Did I want the chicken panini with apple, pear and brie? Hell yeah! I tried to order smartly. And ended up with major food remorse anyways.

Everything was delicious. The carrots were sweet, the green beans were perfectly cooked and crunchy at the same time. The polenta felt and tasted more like mashed potatoes and the turkey was lean. I enjoyed it so much I just kept eating it. So much for moderation, huh? 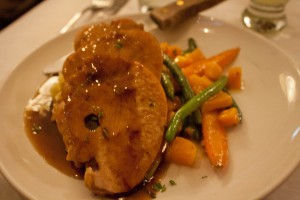 I ate all of my veggies, half of the polenta and one of the three slices of turkey. I wanted to eat all of it, but I restrained myself and saved the rest for lunch the next day. I knew I was overdoing it on the calories and indulging. Especially when I got back from the bathroom and Michael had ordered dessert for us to split. 😛 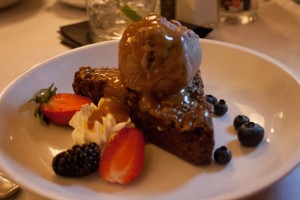 Damn him! He got the Heath Bar crunch brownie. It came with a scoop of chocolate ice cream, whipped cream, caramel sauce and fresh fruit. I ate all the fruit and had three bites of the brownie and ice cream. I made Michael eat the rest. I was definitely stuffed to the brim.

Michael told me to stop feeling guilty about the food because we’re going on a “diet” in a week. (I loathe that term “diet.”) I suppose this was our last hurray before going gluten free and dairy free for an entire month. Yep, that’s what I keep telling myself….last hurray….

QUESTION: Do you splurge right before going on a “diet” or making a big lifestyle change?