It’s crazy that my little baby is almost 2 years old. I can’t believe how fast the time goes. It’s a cliche, but so true. The days are long, the years are short. That aptly describes parenthood.

Logan is becoming a little boy. He’s always been a super happy baby with a sunny disposition. He’s smiley, somewhat outgoing (a little shy at first in new situations) and very joyful. 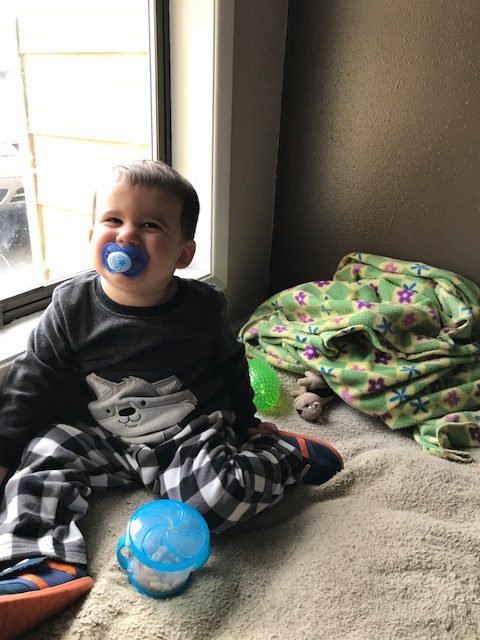 He’s excellent at playing by himself. We play with him but for the most part, we let him lead us. He is very good at letting us know when he wants to play with us, or if he just wants to do his own thing. Watching him play with his toys and books on his own feels very familiar to me. I was like that as a child, too. I was introverted and shy and played with my Barbie dolls for hours. Later that became books. I’d get lost in my books. Lots of solitary activities for me–and I see that in Logan a bit but I also see him play with other kids, too, so I’m not too worried he’s a total introvert. 😉 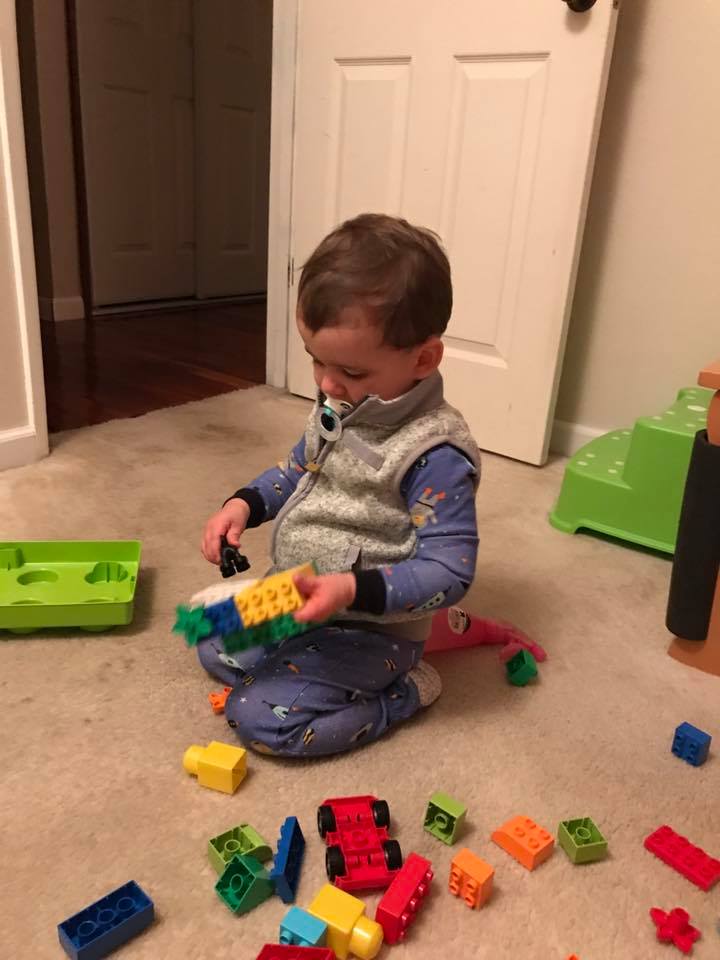 A few months ago, Logan became obsessed with his Binkies. He was never really into them much as a baby, except for sleeping or when he was teething. I think it was a combination of him getting a bunch of new teeth, plus several molars, and changing daycares back in November/December that brought this on.

I’ve told Logan several times now that his Binkies are going away when he turns 2 so he better enjoy it now. LOL Big talk from mom & dad–we’ll see if we’re strong enough to go cold turkey!!! 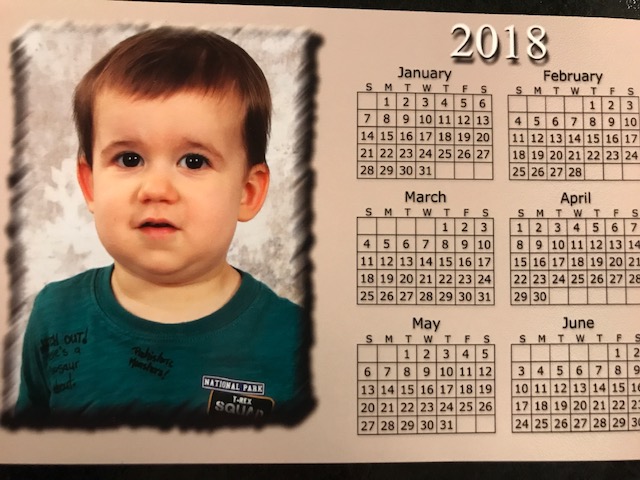 Logan loves his new daycare and so do we! It’s such a better environment. He’s making friends, having fun, learning, doing art. It feels almost like a preschool instead of just daycare.

Every once in awhile, Logan surprises me and wants cuddles. He’s such an active little toddler, never sitting still, doesn’t want to sit still for long for books or cartoons–he’s always ON THE MOVE. I so miss the baby days when he used to fall asleep on us while we watched TV. It was nice just cuddling!! I hope he’ll want to cuddle again someday…

But when he’s tired or cranky or not feeling well, we do get a little bit of cuddles. A few weekends ago when I was sick and Logan wasn’t feeling well either, he took a nap on me for about 45 minutes. It was kinda nice. 🙂 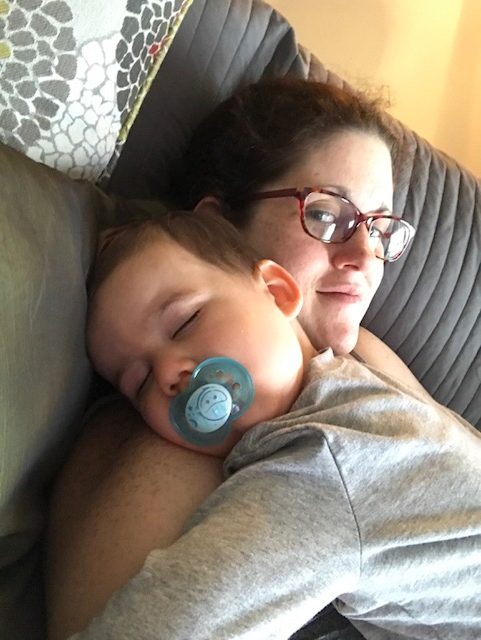 So Logan is also a bit advanced for his age… (haha) he reached the Terrible Two’s early. Around 18 months or so to be exact. Boy oh boy! There are many times Michael and I just look at each other with big eyes, sometimes biting our tongues to keep from laughing, sometimes fuming from frustration. There is nothing quite like the tantrums and hysteria of a toddler not getting what they want!

Logan has a very strong personality, too. He’s focused and determined and sometimes defiant. Part of that is toddler-hood and testing boundaries. But part of it is also a stubborn streak that he inherited from both of his parents. Not even joking. The stories my parents have told people about my stubbornness are legendary. And you know what’s funny? KARMA. Sometimes I’ll tell my mom about something Logan just did and she’ll just start laughing hysterically on the other end of the phone and say that I used to do the same exact thing.

I definitely have newfound sympathy and understanding for my parents.

But I don’t mean to paint Logan as a terror. 90% of the time he super good. The 10% of the time when he’s not, Michael and I have to remind ourselves just how lucky we have it because he IS such a good kid. We forget in the moment of the toddler power-play (current power play: not wanting to eat any food that isn’t mac n’ cheese or PBJ or bananas) and feel frustrated at how not-in-control we feel. 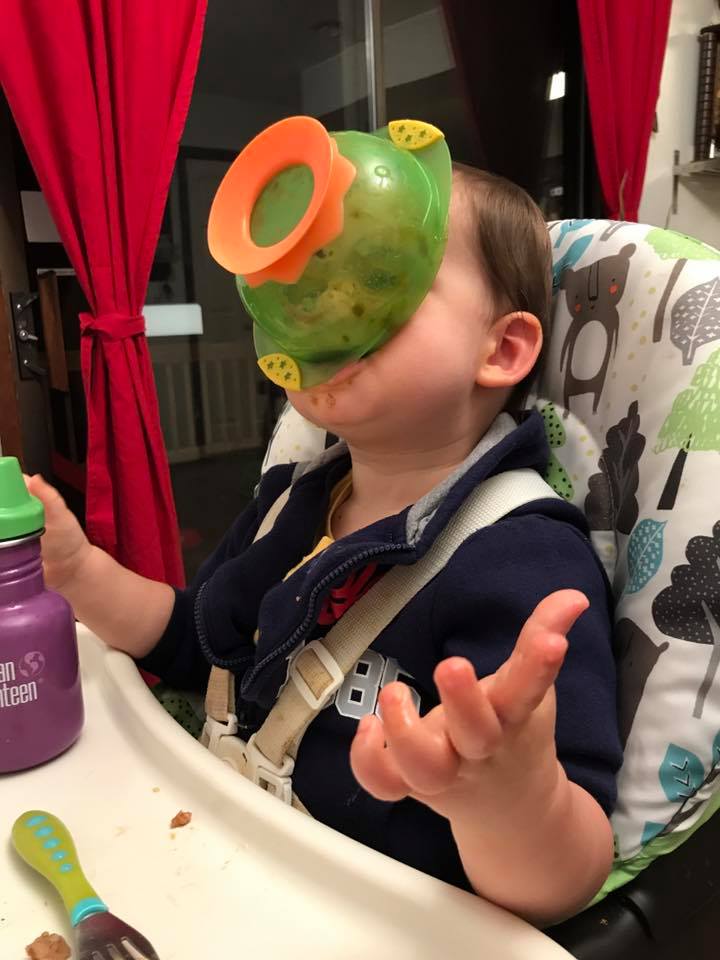 I am definitely struggling with learning patience and how to negotiate with a toddler who clearly understands what you are saying, but can’t quite communicate yet and definitely doesn’t want to comply.

He’s talking a LOT. It seems like every day he says a new word out of the blue and sometimes we are surprised and curious about where he learned the word. LOL

He’s obsessed with shoes and jackets. He wants to wear them 24/7.

His favorite food is bananas, green beans and currently applesauce. Surprisingly, he’s not a fan of corn dogs, spaghetti or chicken nuggets–which is toddler staple foods. He’s so picky! 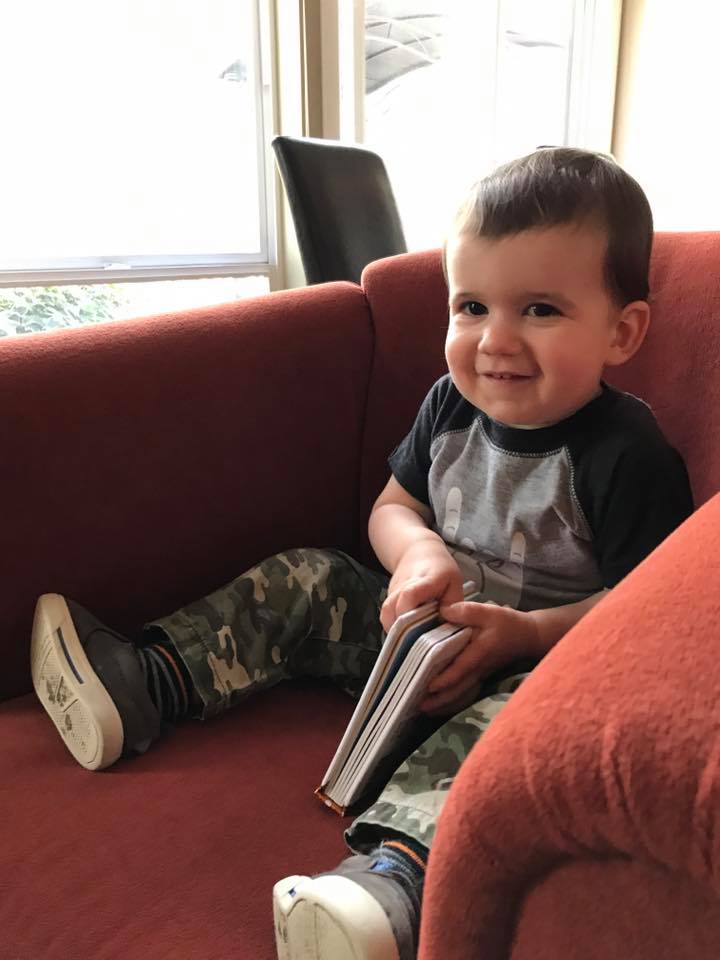