My work has mandated that everyone who is non-essential work from home. No end date. The governor has ordered all bars and restaurants in Oregon close (except for takeout/delivery).

We have a home gym with weights and kettlebells and a treadmill. We also have a bike trainer, if need be. I decided to go for a REAL bike ride (for the first time in years). It was cold but sunny.

It was nice being on the bike after so long! I will try and do it a few times a week. And if weather holds up, I will run outside, too. I’m hoping Michael and I can start up doing yoga again. It’s better than nothing when I can’t go to the gym.

Recently I started a part time job with Furever Family petsitting. It was going to be about 10 hours a week or so. Obviously that’s kind of on hold right now. People are cancelling vacations and not going anywhere so they are cancelling their pet sitting/dog walking bookings.

Amy (owner of Furever Family) is AMAZING. We started using her almost 7 years ago! When we got Bella! A friend recommended her. Her business was kind of new back then. She used to be a 911 Operator and needed a change (as you can imagine). And it just so happened she was seriously the dog whisperer. She was SO good with Bella. Bella LOVES her. Amy helped so much with Bella’s socialization and training. And Amy was there when Yggdrasil was dying and I needed extra care for him. She even was there when we said goodbye. 🙁

I am super happy to be part of the team now. I’ve done some training for a few weeks. It’s kind of the best job. You get to play with kitties and puppies and go for dog walks. It’s awesome!

So since the world is a scary, crazy place right now and everyone is probably at their max anxiety (I know I am!), here are some of my favorite pictures from my training so far:

It’s cool because Amy is a vet tech, too, so she’s trained to give medicine and fluids to animals that need it. She gets a lot of referrals from vets.

Obviously my job is on hold right now. A lot of people are cancelling trips. It’s going to be hard for a while.

If you are in the Portland area, check her out! She does other pet services, too.

The last time I was on my bike was at the beginning of August last year. I think I was like two months pregnant by that time and even though I wasn’t really showing yet, it was definitely getting harder to bike to work like I had been doing. Morning sickness sucked. Then on the ride home my heart rate was getting too high and I just had to take too many breaks. Then my back went out…so biking was pretty much over for the season.

I thought about getting on the bike this summer but I never did. Honestly I don’t know that my core/back was strong enough postpartum until now. I’ve been doing a lot of PT exercises and core exercises to strengthen my back and things have gotten a lot better.

Anyways, Sunday instead of swimming I went for a bike ride. We had plans to go to Michael’s mom’s house for brunch and I (thankfully) got a chance to sleep in a little bit so I didn’t have time to swim.

I got my bike down in the garage and dusted off the cobwebs (seriously, a lot of them) and both tires were flat. I pumped them up and let it sit for a bit while I got dressed and ready to go to make sure that they held air ok before I went out.

Another plus side to wearing a cycling bib instead of shorts? They fit even if you are 20 pounds over your ideal weight! 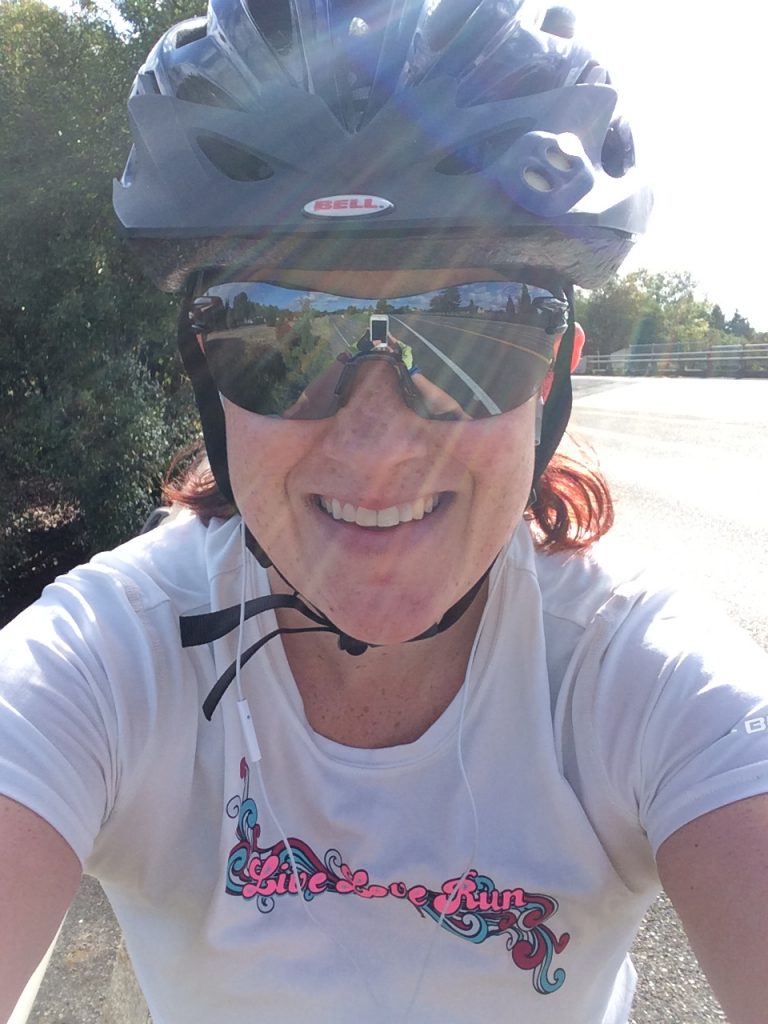 It was a little chilly but once I got moving and out of the shade it was the perfect temperature. I biked the route I take into work. 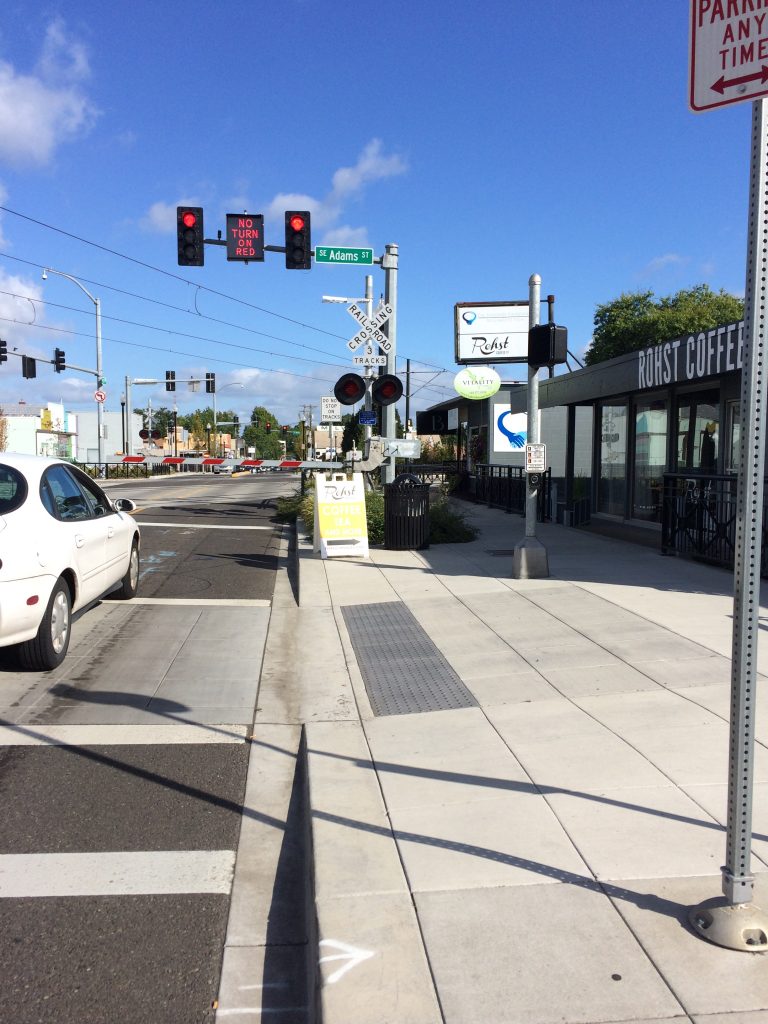 I got stopped by the train for a few minutes but other than that I didn’t need to make many stops. I was surprised at how easy it felt being back on the bike (other than the saddle, of course). Perhaps the walking/jogging I’ve been doing lately has gotten me back into shape for cycling.

I didn’t go as far as I had wanted to go before I had to turn around. It was getting late and I still needed to go home and clean up and get Logan ready for brunch. So I turned around and went back the same way. And I was surprised, again, at how easy it was going up the killer hill home. 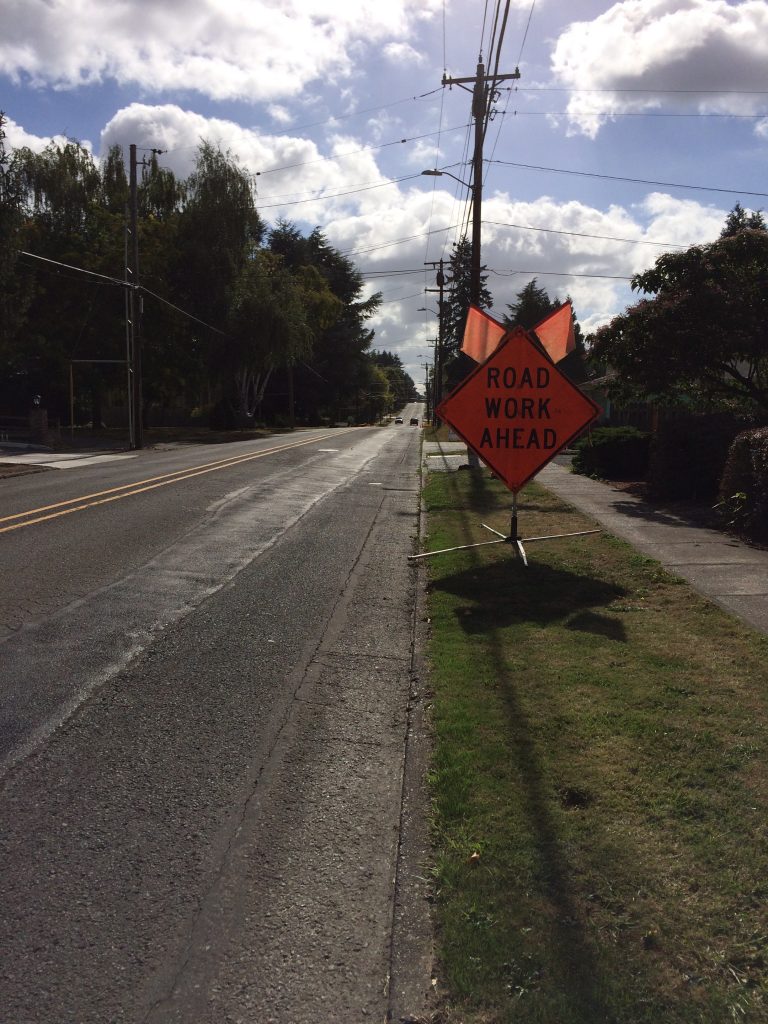 It doesn’t look like it but this hill is really long, slow and at a constant incline. It’s not incredibly steep but it’s steep enough to get your heart pounding and it’s a constant uphill climb so you never get to coast or really take a break. But this time it was incredibly easy for me to do. 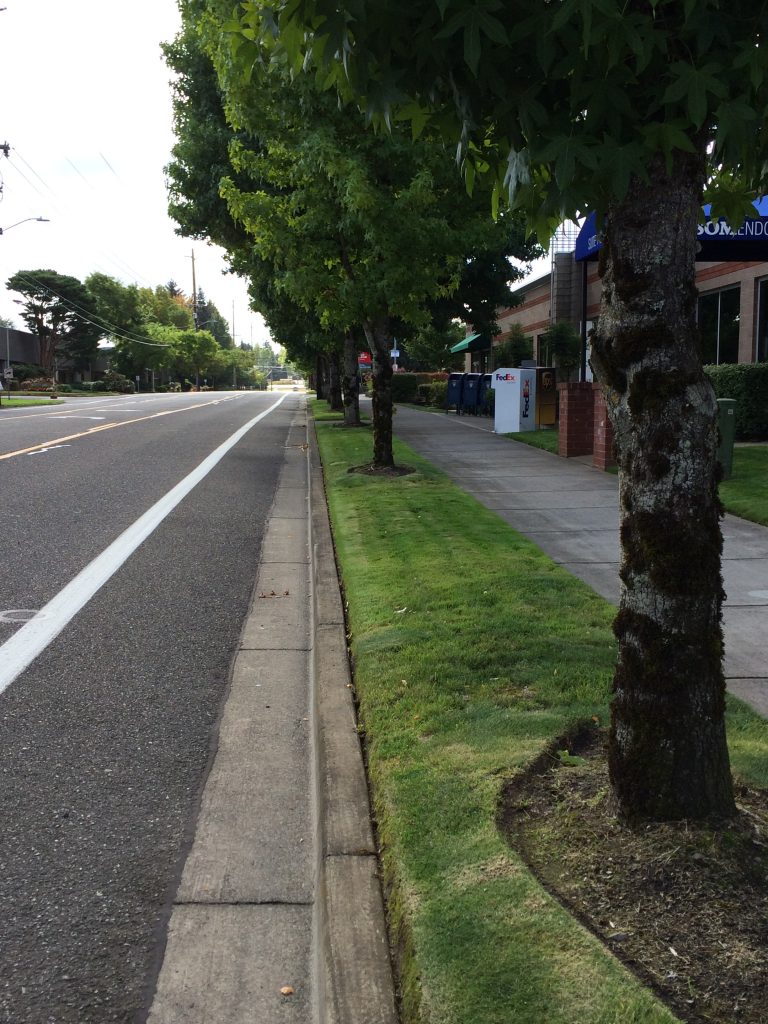 It was a fantastic little ride. I went pretty hard for my first ride back because I was so short on time. I wanted to get my calorie bang for my buck. 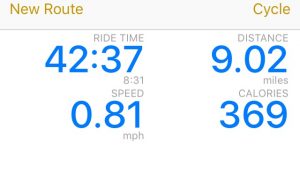 I was glad I got in a good workout in the nice summer weather. We aren’t going to have many more of these kinds of days! 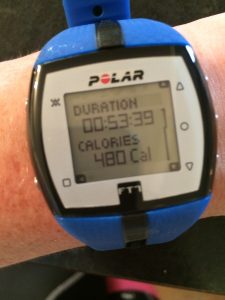 After that we went to brunch. There was a lot of tasty food for brunch. Michael’s mom made a cheesy potato casserole, an egg and meat breakfast casserole, fresh fruit, deviled eggs and blueberry scones. 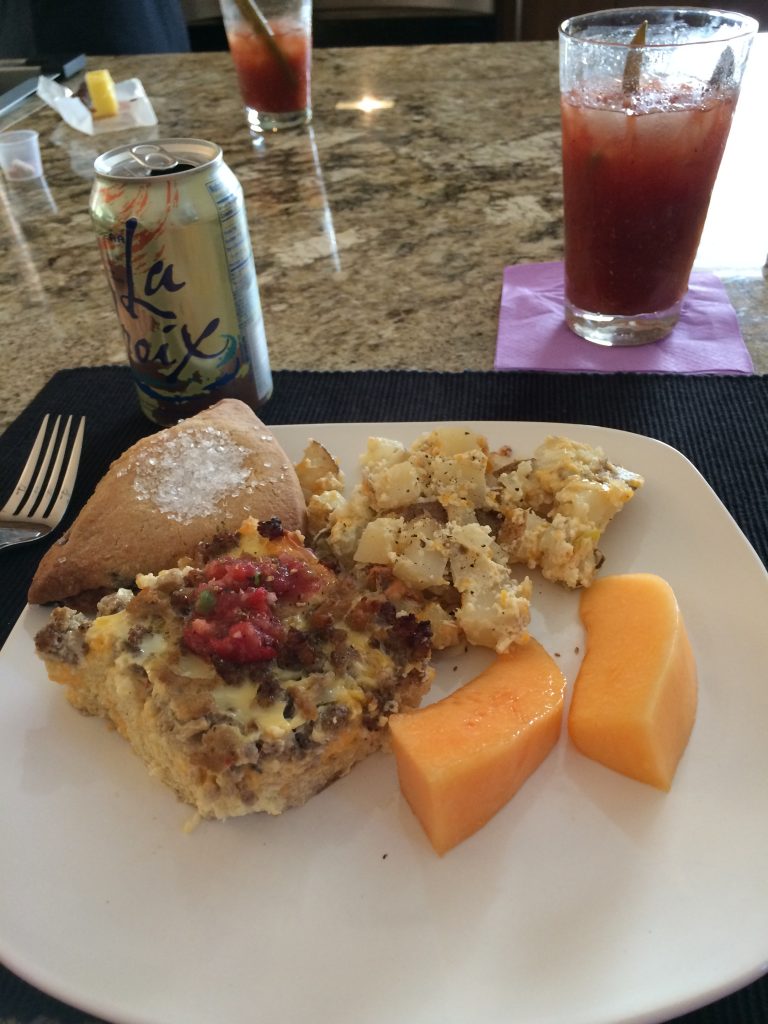 And I had my first Bloody Mary in like a year and a half. 🙂 Yay for brunch!

Logan did great for his first brunch outing. And we got to show him off to some friends and family that haven’t met him yet. 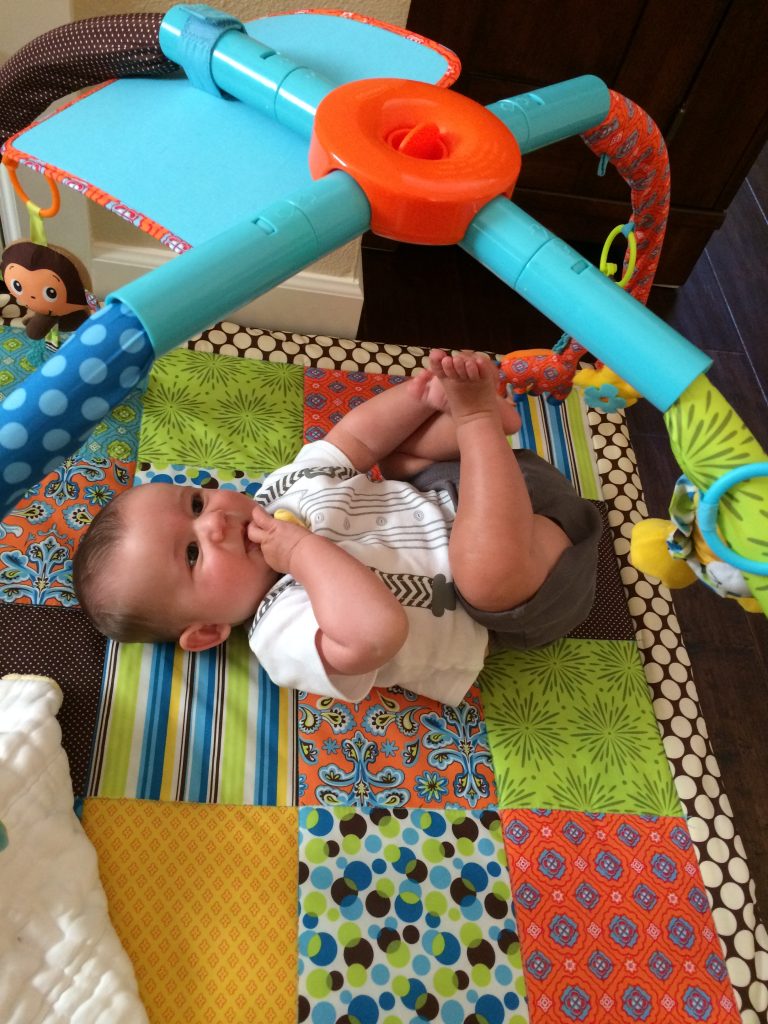 It was a really good day and a good distraction for me. Monday is the first day of daycare for my little man! So the bike ride and brunch were good distractions … at least until the afternoon.

I’m hoping I can go for a few more bike rides before the weather turns poor. I don’t see myself biking to work this year, though. There’s just too much stuff I have to take to work in order to pump. But by spring next year maybe I can get back into it!