We’ve officially been in our new house for a year! What a rollercoaster of a year it’s been.

When we moved in last year, I did the bare minimum–I unpacked and decorated and we’ve been making it our house…but we didn’t do anything major. After spending so much time remodeling our old house to sell it, sell our house, buy this house, move…I was just burned out. And I did not want any more projects!

But…with the pandemic…we suddenly had time. So we started some projects that were on our list for “eventually.” The first was Logan’s room.

Our house is a 1920’s bungalow. Originally the house was a small, 2 bedroom, 1 bathroom house. But the original owners remodeled the attic to create a second story which is where the master bedroom suite is, plus another bedroom and a bonus area. Since it’s the “Attic” the ceilings are a little funky. Logan’s room is small with slanted ceilings. It’s ok for now. When he’s older and 6 feet tall, it won’t be his bedroom. 😉

I didn’t take official “before” photos. But I have some before photos as we began prepping the room last weekend. Logan helped me take everything out of his room.

I did taping, prepping and primer on the walls. The walls were a very dark brown and then a light beige. The ceilings were cream colored. It was all very blah and dated.

I painted the ceiling white ceiling paint. It looks so much better!

Then I painted part of the closet a bright green and the rest blue. It looks SO nice! We love the colors!

I also got new dinosaur drapes and some dinosaur art to redecorate.

And the dinosaur decals he already had on his walls, are back up!

Logan loves it. I love it. I love the colors. The room looks much better. It’s brighter, lighter, happier, looks like a boy’s happy room instead of just drab brown. It’s so nice. I am super happy with it. The blue is “Honest Blue” and the green is “Heartland Frosty.” Definitely recommend both!

So the next big projects: paint the office and paint the master. The master bedroom is HUGE and it’s a very light brown/tan/beige. Kinda boring. The problem is that the room is humongous AND Michael and I cannot agree on a color. So we are waiting on that one. The issue with the office is that the colors are ATROCIOUS (think baby poop brown) and unfortunately the previous owner not only PAINTED THE ORIGINAL FLOORS (what were they thinking) so we have to fix the floors, but they never removed any of the previous layers of paint. So we have a lot of paint removal to do before we can do that room. Plus, the office has the original windows:

I got some product that is supposed to remove up to 15 layers of paint…we will see…but we may end up having to hire professionals. I’d like to keep the original windows. But they aren’t in great shape.

We are slowly making progress on the house remodel. I absolutely hate the bathrooms! They are so old and dated. A few years ago I painted the main bathroom (gray) and we replaced the sink in there. I really like what we picked. It’s kind of a dark greyish brown with a white countertop.

We decided to bite the bullet and hire someone to do the flooring in both bathrooms. The guy that did our deck did a great job and he does interiors so I reached out to see if he could do it. I knew that the bathroom floors would be hard to redo ourselves (and not just because of Michael’s recent back issues) so it made sense to hire a professional. I knew that the subflooring needed to be replaced and I wanted the tile to look nice and be level so it was just a smart thing to hire it out.

I REALLY wish we had photos of the original bathroom but Michael lost the photos he had on a computer that crashed. Basically, the hall bathroom had teal everything–the walls, the ceiling, the toilet fuzzy cover. I think the vanity was white with flowers on it and there was some yellow in there, too. The vanity was small and dated and I think the countertop was yellow? It’s hard to remember. Basically, it was hideous!

The downside is that we wouldn’t have a bathroom at all for about two days. Bella went to her boyfriend’s house for the night: 🙂 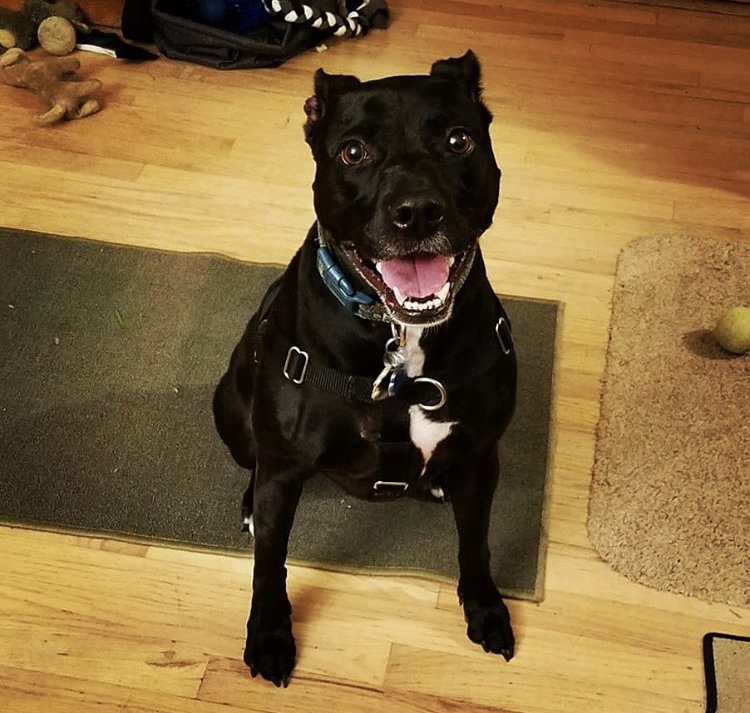 And we booked a small cottage in North Portland on AirBnB for the night.

The cottage was super cute. Small but good enough for us for one night. Plus there was a hot tub! After Logan went to sleep, we had a glass of wine and hung out in the hot tub outside, surrounded by a bamboo fence. It was super cute. 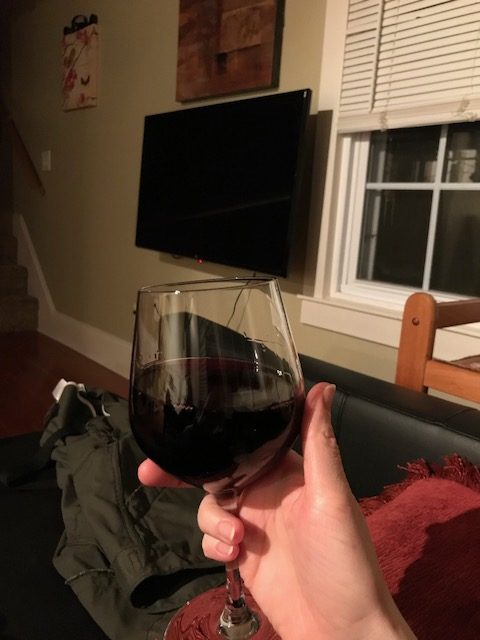 I was SO excited to go home and see the new bathrooms.

GOD I HATE THAT LINOLEUM! 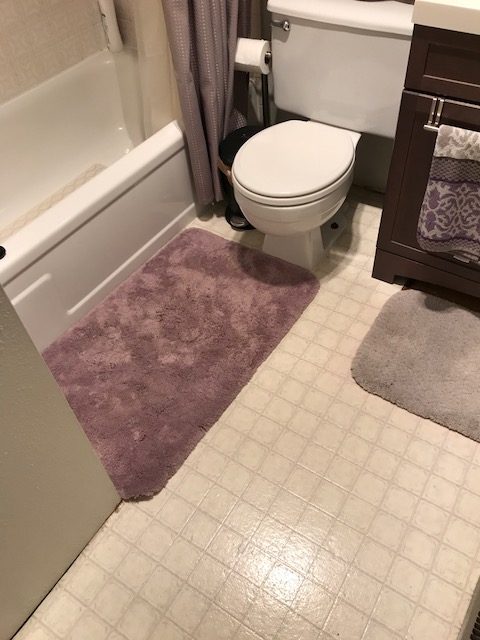 You can see the subflooring under the new sink vanity in this photo:

The old vanity was small and short in a weird way, so it was nice to replace it. Plus we got something that was a little bit bigger and held more stuff. We got two new vent registers and went with white for both since we chose white tiles for the bathroom remodel. 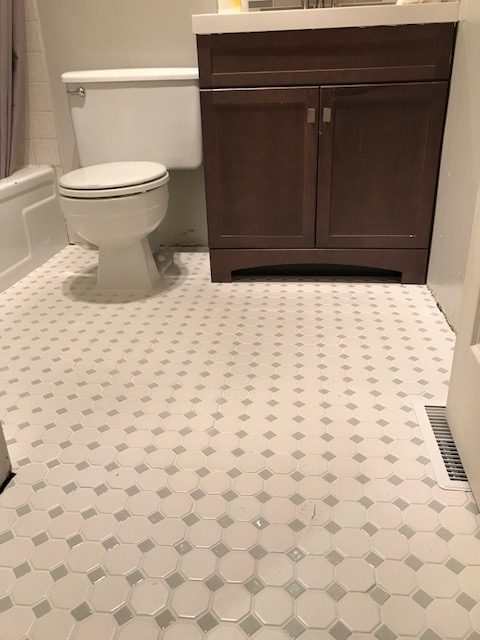 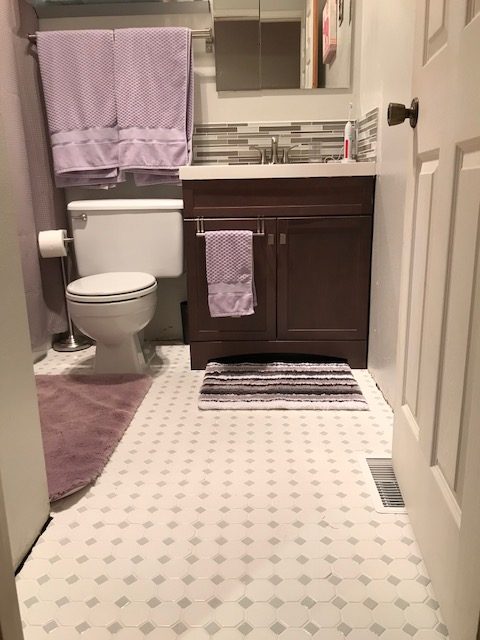 I LOVE IT!!!!!! The floors look so amazing! I didn’t get fantastic photos because the light wasn’t great, but trust me, it looks great in person. The tile is white with gray accents. The backsplash matches the gray in the tiles. The sink is attached the wall (finally). 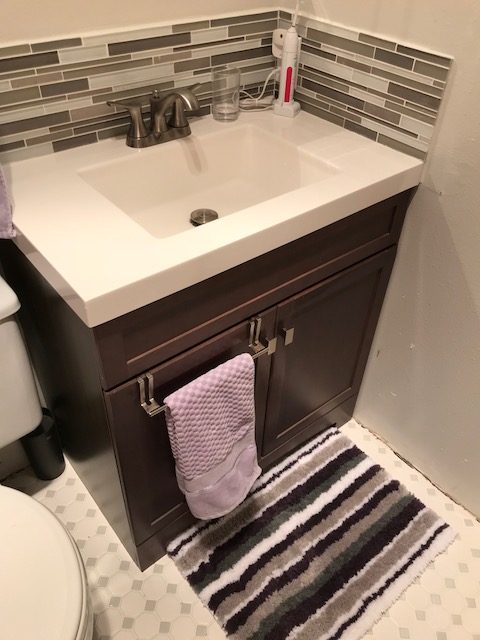 The room looks bigger, too. We need to put in new toilets and then finish the baseboard trim and paint all the doors in the house, and the bathrooms are DONE!

The master bath is really small. It’s basically just the shower and toilet in the bathroom area. There is a sink in the bedroom by the walk-in closet. But since this house is from the 70’s it’s all really old, small and just not cohesive for two people to use. So this is basically Michael’s bathroom and I use the other one. 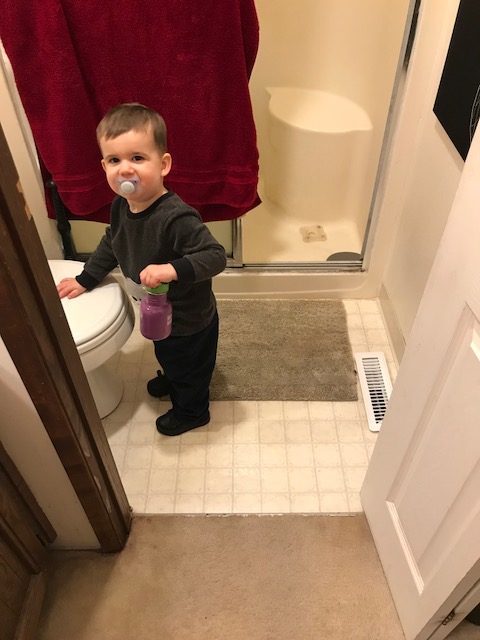 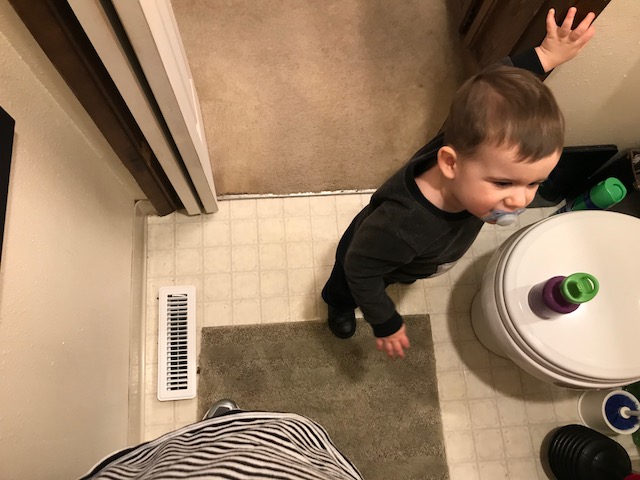 During (You can see the yellow that the walls used to be in the below photo!): 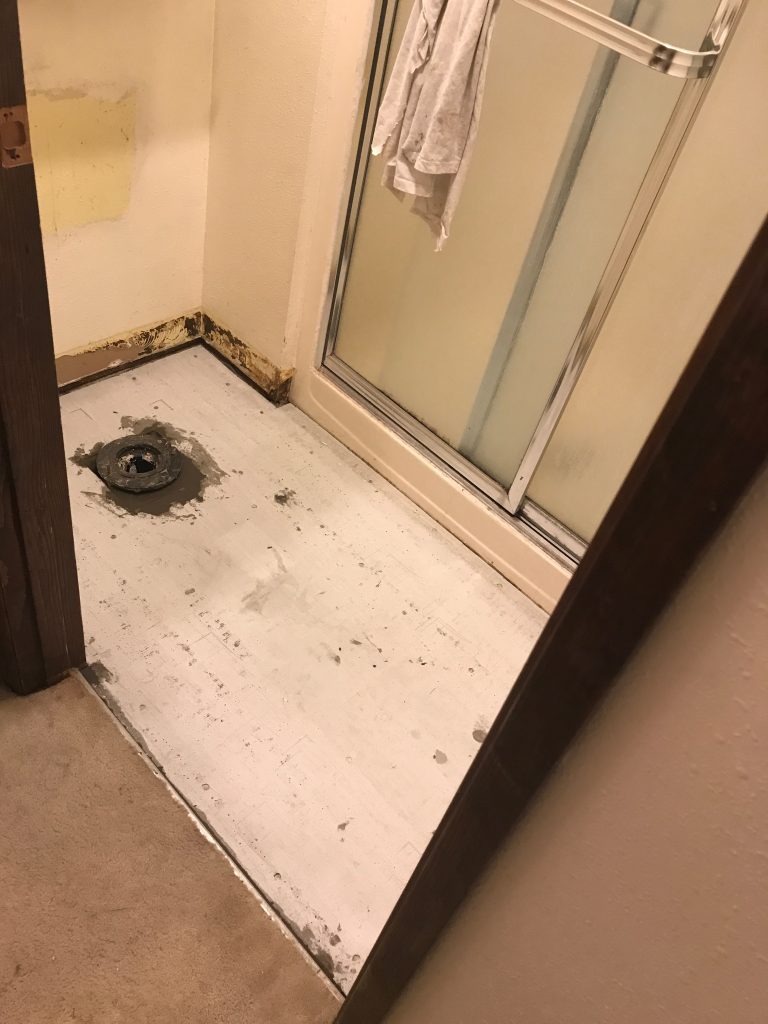 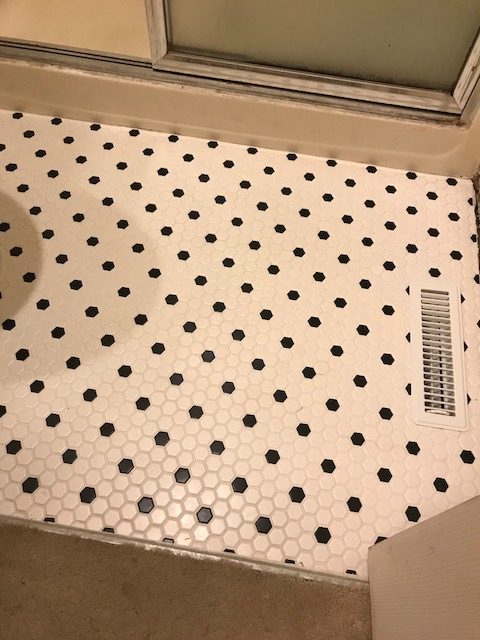 Michael’s bathroom has white tile with black accents. This was what I was originally going to use for my bathroom, but I think it looks better in the small bathroom instead. And it is similar but not the same as mine, so it is a nice difference and ties everything together. 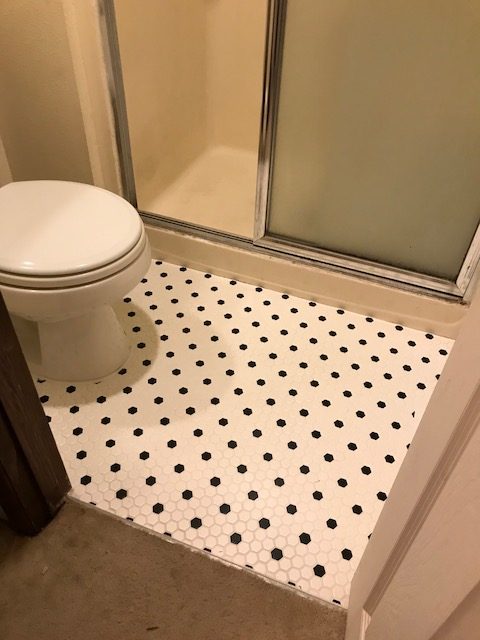 We need to paint Michael’s bathroom (I think white is best), install a new toilet, and put in the baseboards and then that room is done! It looks so nice! We are super happy with how everything turned out!