Who is watching Tour de France this year? 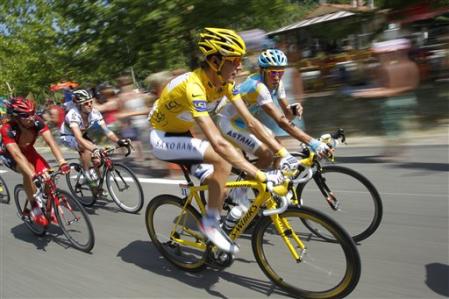 If you aren’t watching, you missed some pretty exciting drama yesterday in Stage 15 of the race.

Some quick background: Lance Armstrong isn’t in the running for first place anymore. Too many crashes at the beginning of the Tour cost him too much time. The original story was Lance vs. Alberto Contador–his old teammate that stabbed him in the back in the last Tour de France.

That seems to be Contador’s MO: back-stabbing, less than ethical behavior in order to be THE WINNER.

“Andy Schleck vowed to take revenge over Alberto Contador after finishing behind the defending champion following a mechanical problem in the 15th stage.”

Since Lance is out of contention and just riding the rest of the Tour de France in support of his other teammates, the new “war” was Andy Schleck vs. Alberto Contador.

Yesterday towards the end of the insane mountain climb in the Pyrenees, Andy Schleck was in the lead and would have beat Contador had his chain not fallen off his bike. In the 13 seconds it took for him to stop, fix the chain and hop back on the bike, Contador passed him and kept climbing without a second glance.

This proposes an interesting debate: was Contador in the wrong for passing him and beating Schleck?

At first I thought “oh well that’s kind of how the game is played.” Basically, it sucks that the chain fell off, but it’s not like the whole race should stop while he fixed his bike. Especially since that doesn’t happen when people crash–the Tour goes on.

Then I started to change my mind. I said, “Who wants to win a race because of a mechanical malfunction? If it was me, I’d want to beat my opponent FAIR AND SQUARE and because of athletic abilities NOT a fluke.”

The general consensus on the chat boards were in favor of Schleck.  “HE CAN’T BEAT ANDY HEAD TO HEAD,  so he ATTACKS him when he has a mechanical [problem]” but then there’s the side that says Contador Did No Wrong.

So that brings me to this question:

Do you think Contador cheated to beat Andy Schleck? Do you think he broke the “Fair Play” rule? Or do you think there’s nothing wrong with taking advantage of the situation?

14 thoughts on “Sports and Ethical Questions”