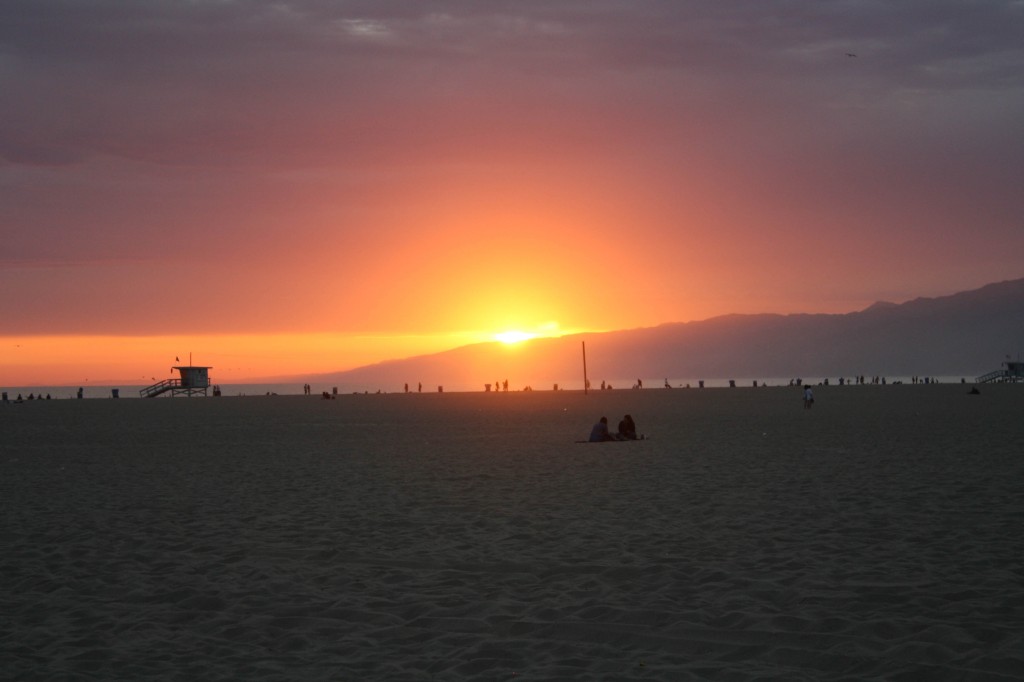 The Santa Monica Pier was a cool sight to see.  When we arrived on Labor Day, it was packed. The people looked like ants. The amusement park on the Pier was huge and free to get into, but you had to pay to go on the rides.  The ferris wheel was $5 a person. Well worth the price! 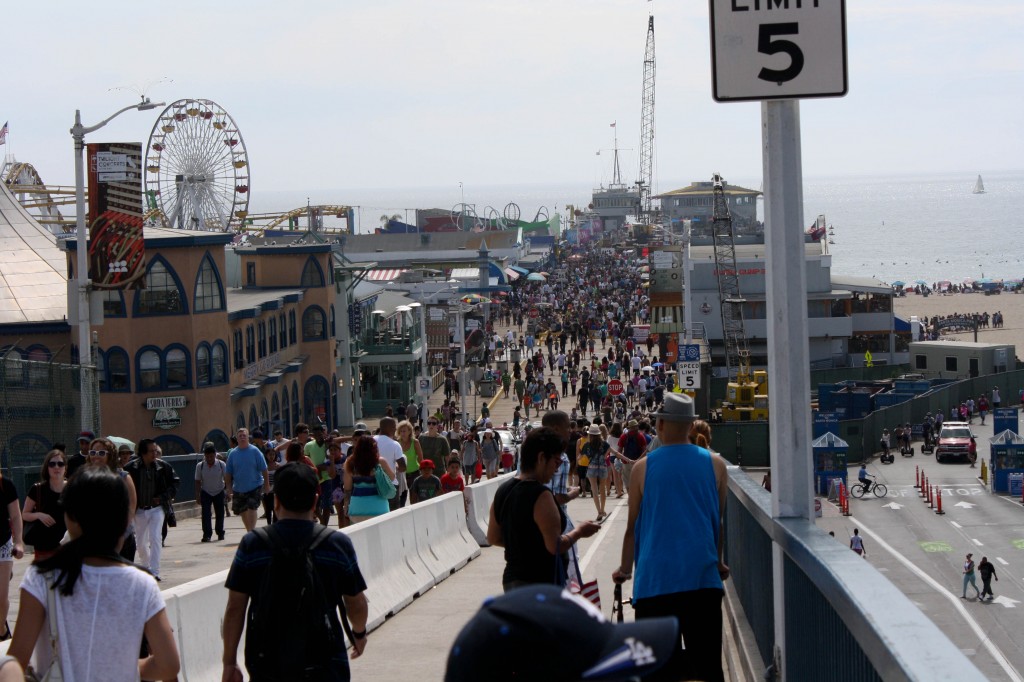 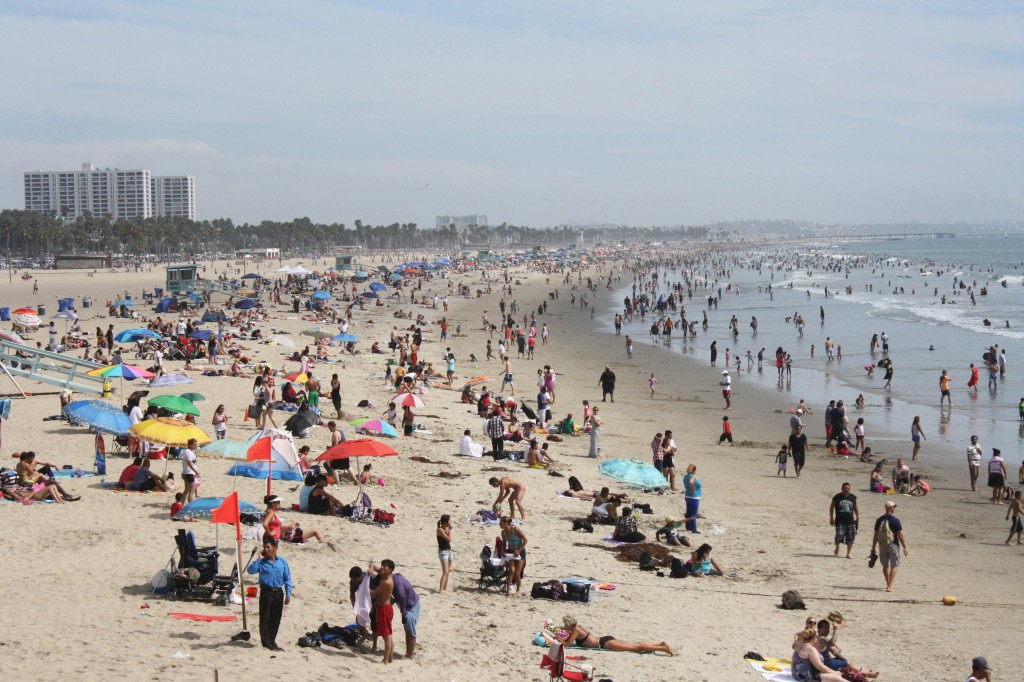 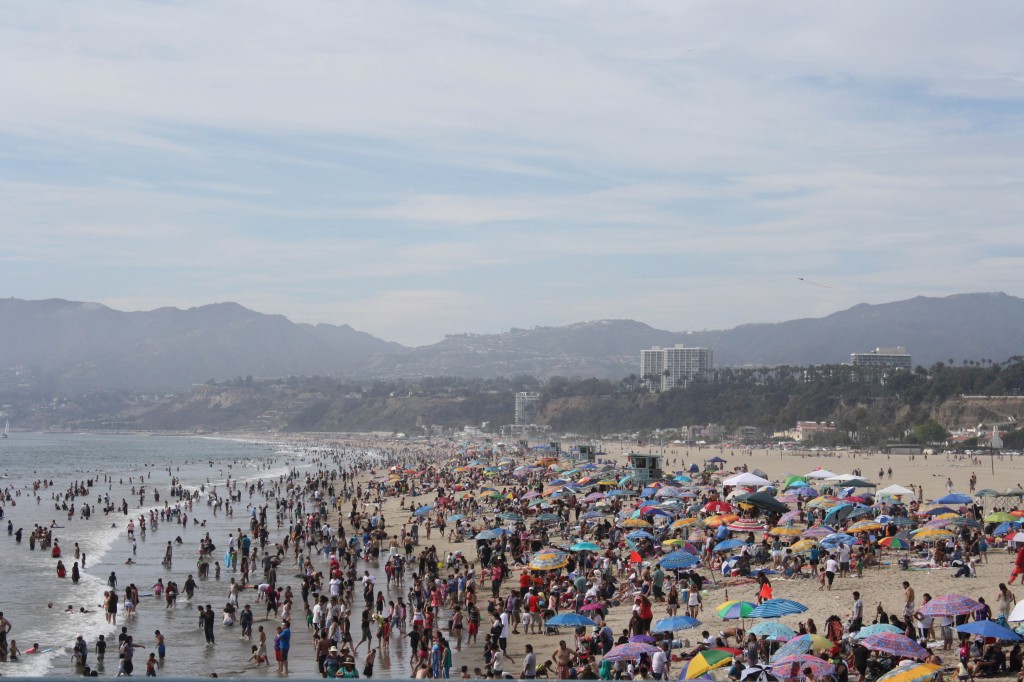 The Ferris Wheel was humongous, the world’s only solar-powered Ferris wheel and more than 130 feet above the Santa Monica Pier! It was just as terrifying as it looks! But I’m glad Michael and I did it! 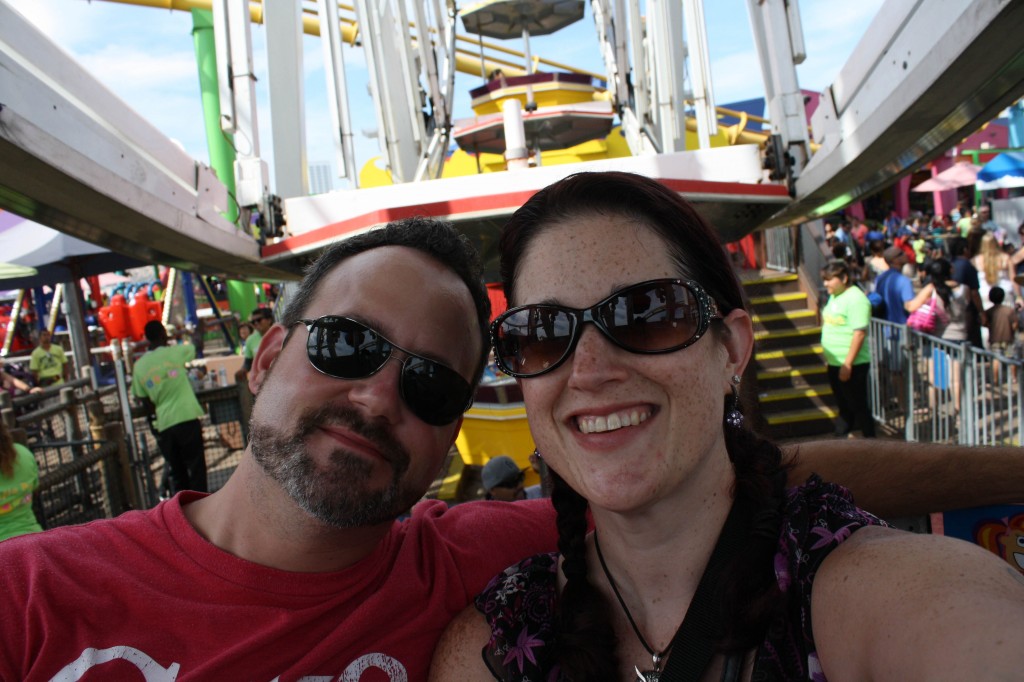 We tried to do it again on the last night to see the sunset from the ferris wheel but it was closed by the time we got down there. I’m equal parts relieved and disappointed! 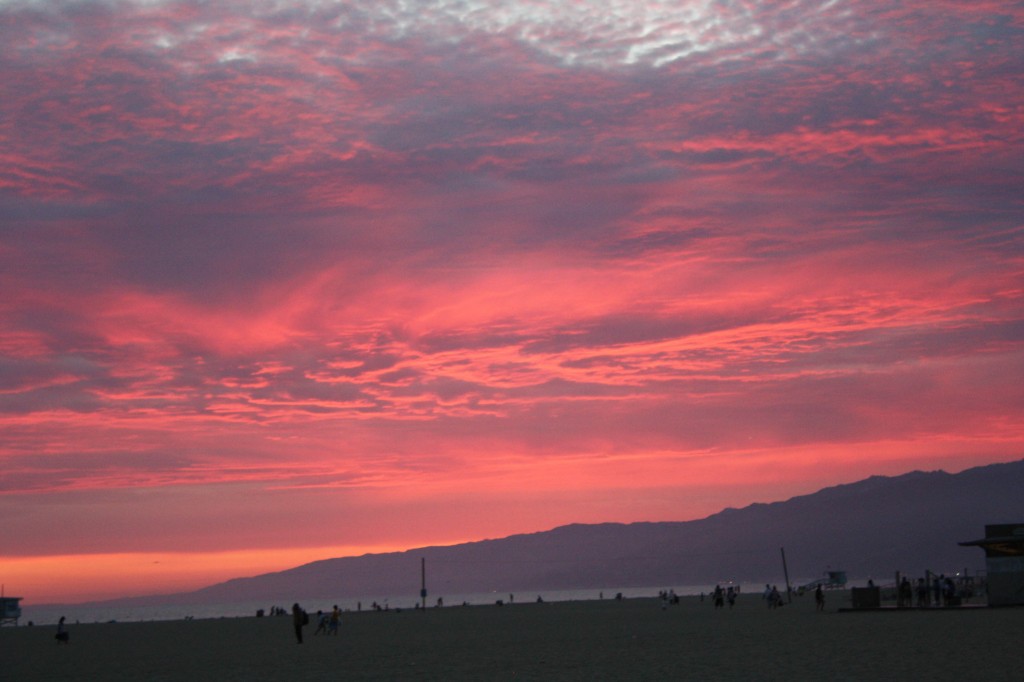 The Ferris Wheel was very scary. It rocked slightly and the higher we got, the more it rocked because of the wind from the ocean. That part was the scariest! I’m afraid of heights and it was hard for me to enjoy it while I was up there. I think I enjoyed it more once I was on the ground. LOL

Venice Beach was much more chill than Santa Monica. Kind of a hippie vibe, low-key and less crowded. There weren’t as many touristy things, which was fine, but there was still tons of “muscle beach” type activities. There was even an outdoor gym with tons of weight machines in the middle of it! I kind of wish I’d known and been able to work out on the beach. 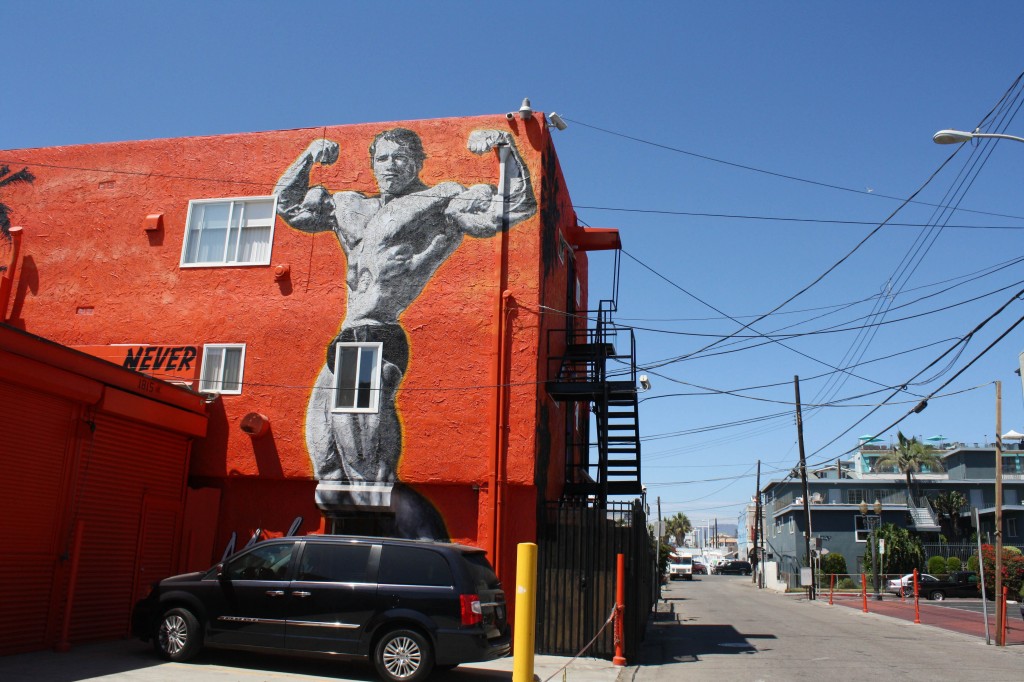 The beach was nice and much less crowded. I’m sure part of that is that we were there in the middle of the week after the holiday. 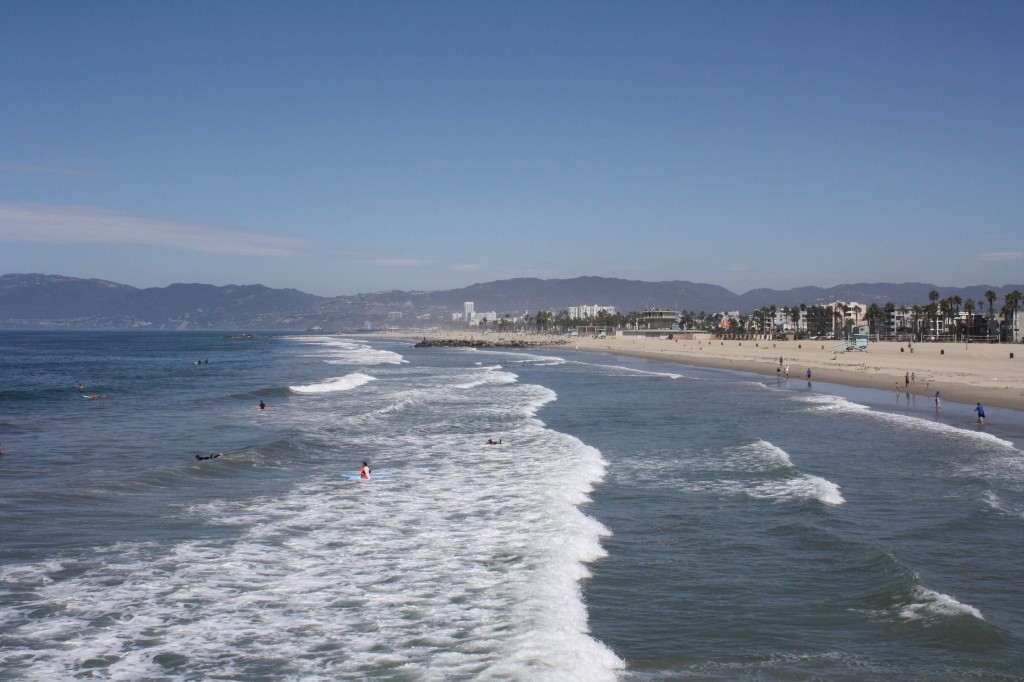 The Venice Canals were a fun thing to visit too. It was close to the beach and we walked a lot of it. It was just kind of a low-key, casual stroll along the canals next to some really nice houses. 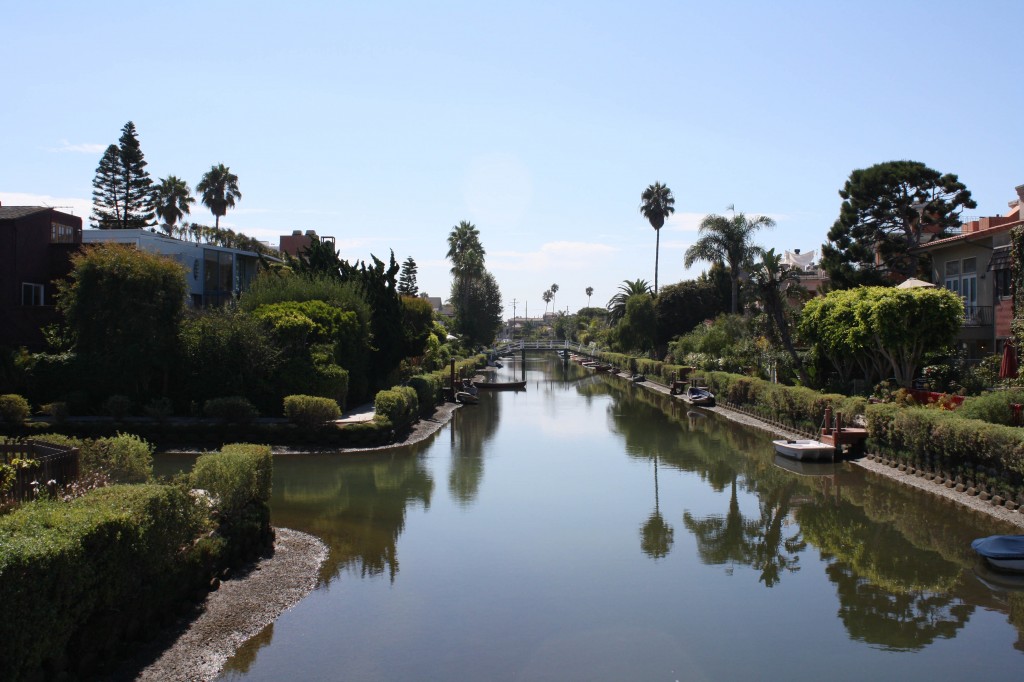 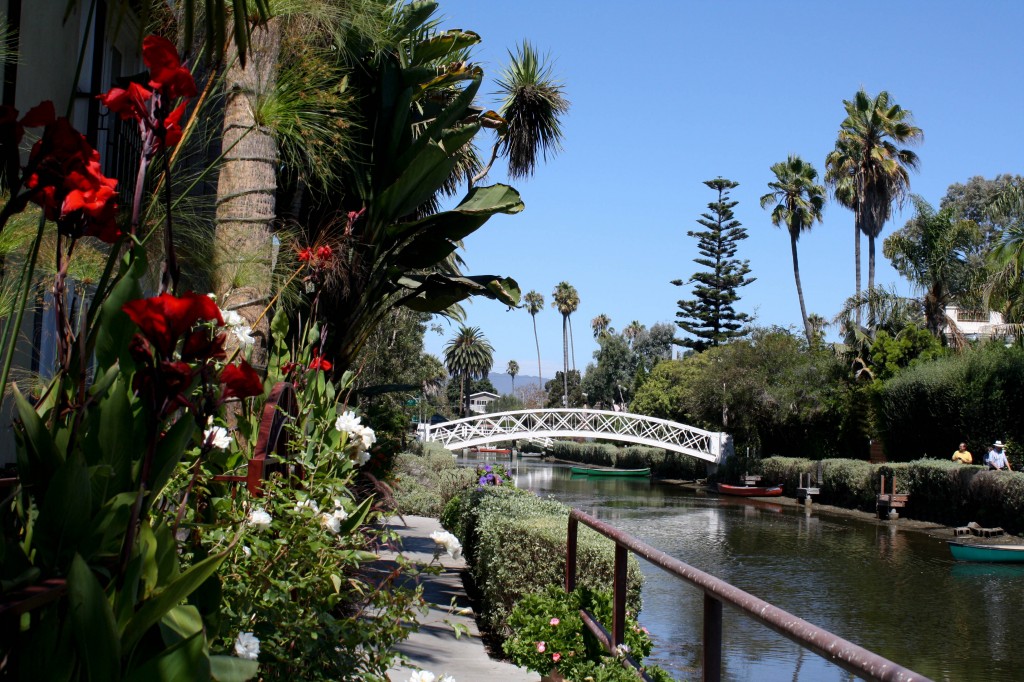 The Getty Museum was by far the favorite of the trip. I am so glad we made it there. The museum is free, you just pay $15 to park. That is a steal! You get so much out of the visit, it’s totally worth it. 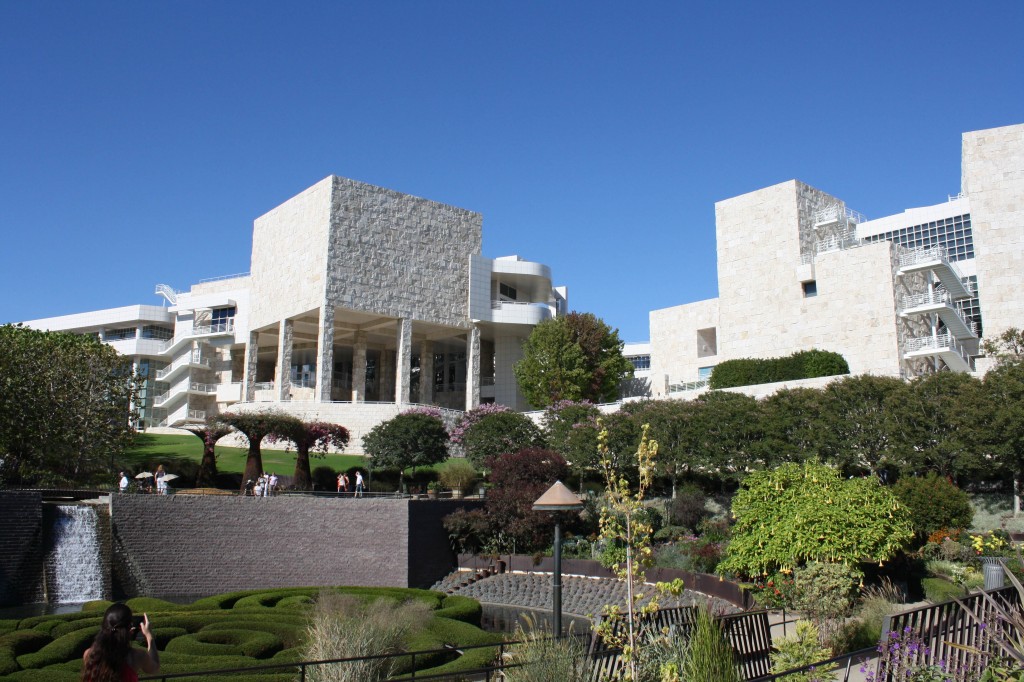 The museum itself is a work of art. As you drive up the freeway you can see the massive building built onto the top of a hill. You park down below and take the free tram (which was kind of fun) to the top. 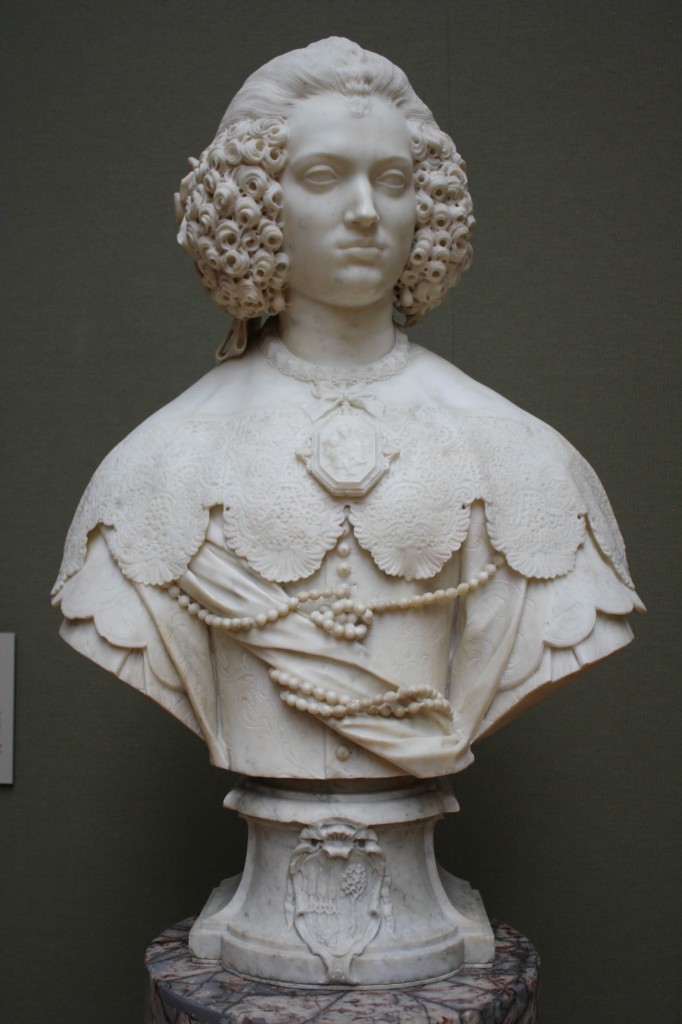 They give you a map of the buildings and you could spend all day there. We spent about four hours walking around. The buildings and grounds were just so pretty and the treasures inside were fun to see. 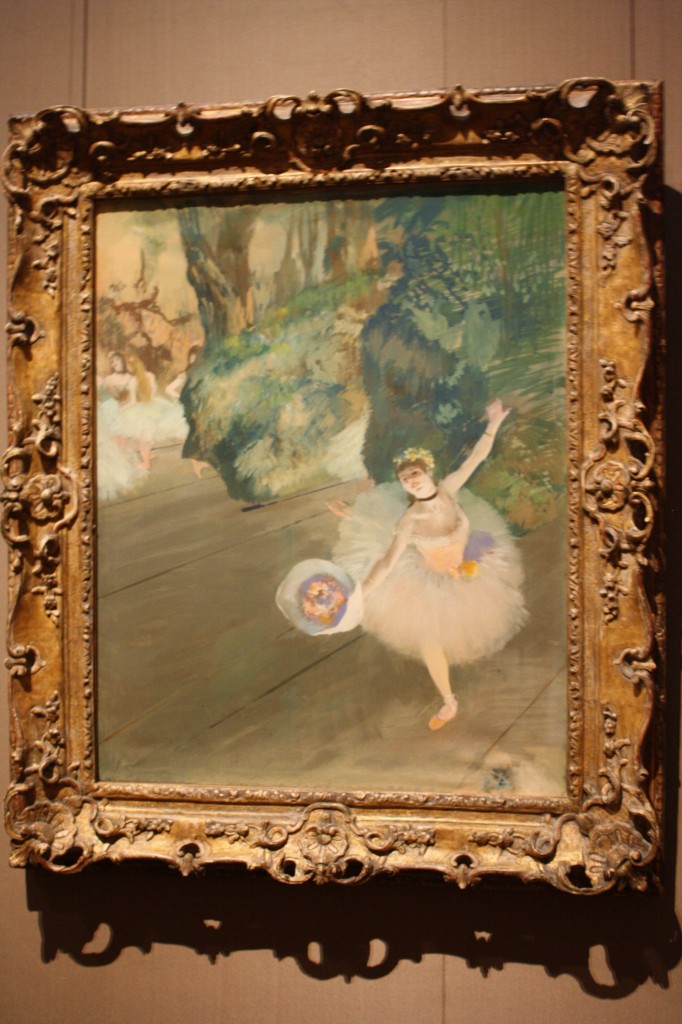 There were several three story buildings and you just worked your way around to each exhibit. It was amazing seeing some famous paintings that I’ve only read about in books. 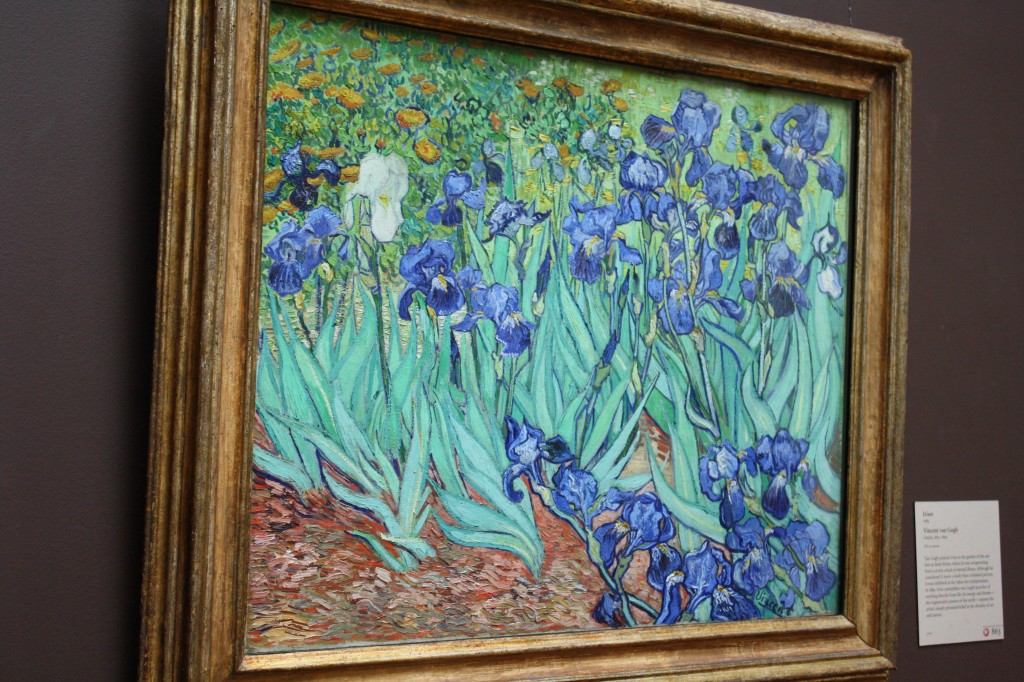 There was also a beautiful, massive garden with a hedge labyrinth and also amazing views of the valley below. Please don’t miss out on this amazing museum! 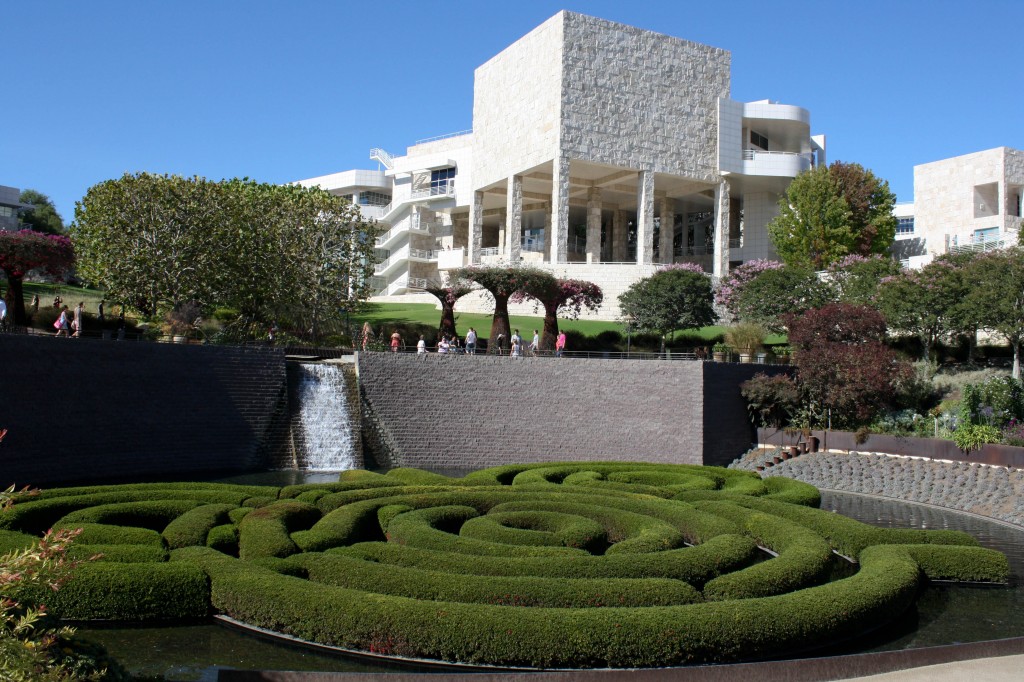 After checking out of the hotel in Santa Monica, we drove down the coast for a bit seeing some of the beach towns as we made our way to LAX. Marina del Ray was pretty but Manhattan Beach was a very cool looking town. I wish we’d had more time to explore Manhattan Beach because it looked so quaint! I think if we had known ahead of time, I would have stayed in Manhattan Beach instead of Santa Monica. 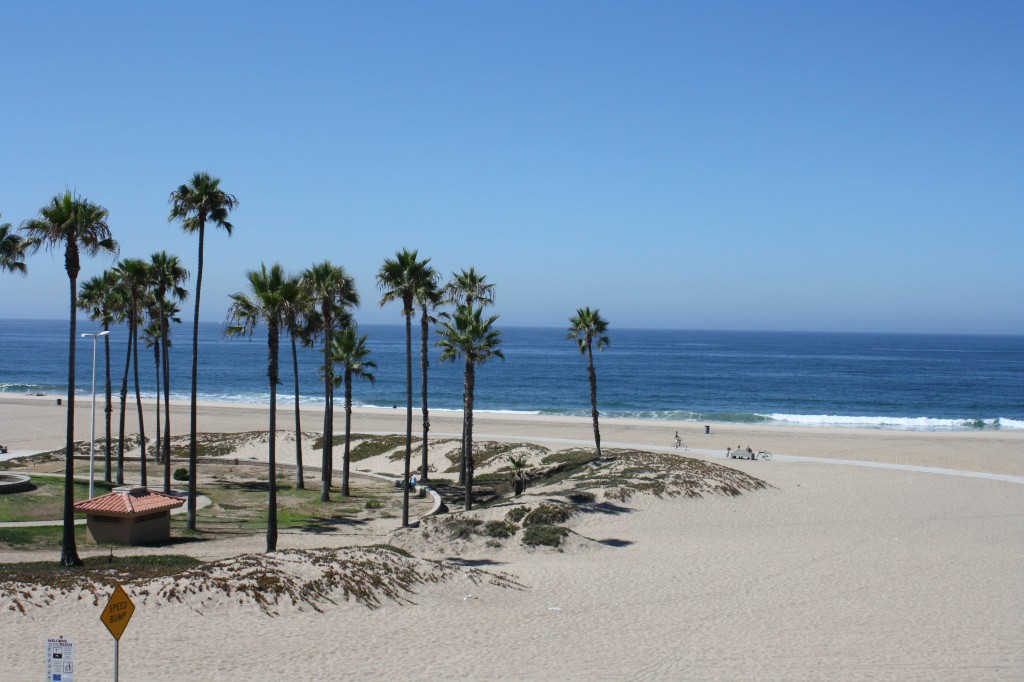 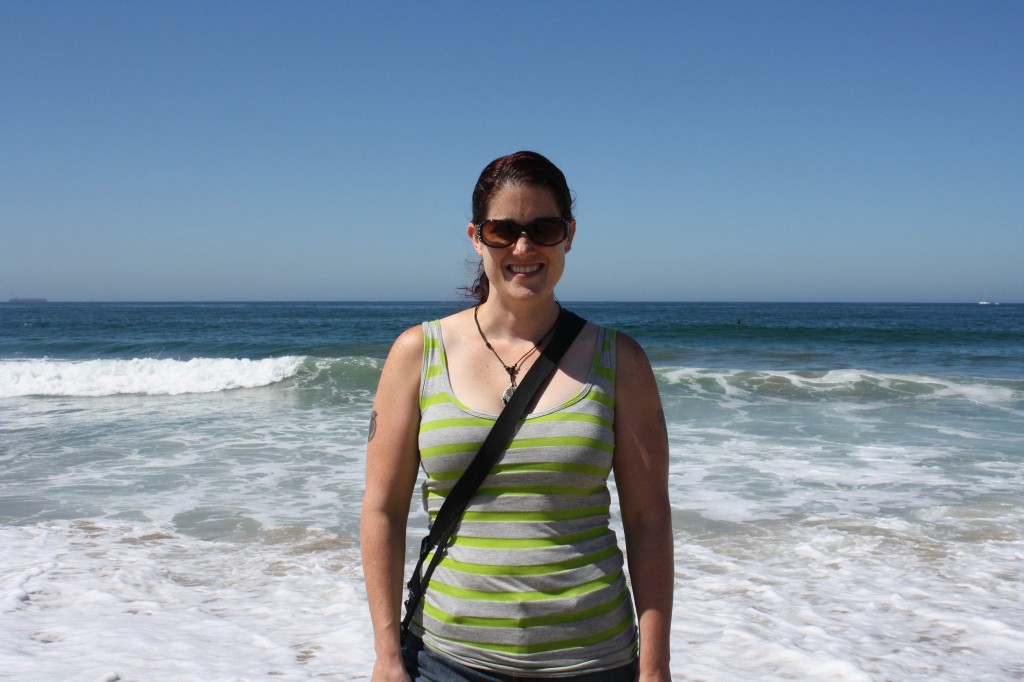 Michael and I stopped at Playa del Ray and walked on the empty beach for about an hour. The sand was soft and hot, the waves were a little chilly, and we just enjoyed being the only people on the beach for a change.

The California Coast was my favorite part of the trip. Knowing what I do now, I would have spent less time in LA and more time beach-hopping!

QUESTION: Have you been to the Getty Museum?