It started Thursday afternoon with a throbbing pain in my left ankle. It was a Rest Day and I’d done virtually no activity all day but sit at my desk. There was no injury, I didn’t fall, I didn’t step wrong. It was just throbbing. I had no idea what it was and hoped it would pass…then it felt like someone was stabbing me in the ankle with a needle.

I called my doctor and they had a cancellation. I was in the doctor’s office about an hour later.

The fill-in doctor checked my ankle and said he thought I was starting to develop Achilles Tendinitis in my left ankle. I’ve had that before. About 4 years ago I got it after running up a sandy dune on the beach. The pain was so excruciating I was stuck on the couch all weekend unable to walk until I finally went into to see the doctor. Last time I wore a boot for 10 days.

The pain in my ankle hasn’t reoccured since the initial pain yesterday but I’m wearing the boot for a week like instructed. He said no running, no elliptical for awhile. He said I can swim. So that’s good.

Achilles tendinitis is an overuse injury. Too much too soon is the basic cause of overuse injuries, however other factors can contribute to developing the condition.

Since I was at the doctor I asked about my right foot. For about a week and a half I’ve been having a strange sensation whenever I’m barefoot (never in shoes). It’s at the arch of right foot and feels like a rubber-band stretching. It’s a weird twinge–not painful at all. I wasn’t concerned.

Guess what that was?

Let me start out by saying: I’ve had NO pain in my foot. I can walk, run, jump, stand…I have zero pain and just that weird twinge when I’m barefoot.

The doctor said I caught that early as well and that was a good thing. He said not to be barefoot and gave me a pamphlet to read. Gee thanks.

I burst into tears. I was sobbing uncontrollably in the doctor’s office and the Asshole said “It’s not the end of the world. You’ll be fine.”

As a runner I KNOW what plantar fasciitis is and what it means for a runner. And yes, Doctor Asshole, it is the end of the world.

I have a boot on my left foot for the Tendinitis. Since I’ve been down this road before, I know that it throws off my whole body and causes back pain. For the next week I will be wearing a hiking boot on my right foot to try and make it balanced when I walk and stand. Hopefully that will prevent the back pain. 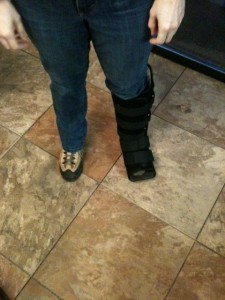 I’m not in a great mood right now.