On Sunday we took a day trip out to Hood River and went for a hike. We did the Hood River Mountain Loop (or part of it anyways).

Logan was super excited to go for a hike! And he did a great job. We haven’t been in awhile.

Not sure if we actually made it to the hike we planned on going to because there was no real trailhead marked but there were other cars parked there and other hikers, so…?

The hike was basically an old road that was pretty steep. We walked up it, out in the open with the hot sun beating down on us. Thankfully we brought hats and had sunscreen and lots of water!

We got to a little top part and there was a really nice view of the mountains, gorge and river.

There were lots of wildflowers blooming. Lots of rocks on the trail. But overall it was pretty easy going.

We did about a mile and then took a break in the shade for water.

Logan was ready to turn around so we headed back down the trail to the car.

It was a lot slower going down with the loose rock and dirt.

It’s not much of a “workout” with a toddler. But it’s really more about family time and getting outside and getting Logan used to hiking. We did about 2 miles.

We got back to the car and I changed and then we drove to Panorama Point Park for a picnic. Due to budget cuts the park is now closed! So disappointing! It’s a great little park with nice views. You can still walk into the park, but it’s not maintained and there’s no bathrooms. But we parked on the street and walked in and had a picnic lunch on a picnic table anyways and just packed our stuff out.

The above view was from our picnic bench. See? Great views! Bummer. Anyways. After lunch we drove to the Draper Girl’s Orchard and Logan got to pet some goats and we bought some fruit.

It was a lovely, warm day. It was nice to get out of town and do something fun after months of doing house stuff with prepping our house, moving, unpacking, etc. I hope we can go for another hike again soon!

We drove back to Portland and Logan and Bella took another little nap in the car. 🙂

Michael’s dad came to Portland for a short visit this weekend. On Saturday we were all up bright and early for various reasons (baby and time changes!) and I went to the gym, then home to clean up and we hit the road for a day trip. We listened to the Tom Petty and the Heartbreakers greatest hits as we drove out to the Gorge, destination: Hood River.

It was pretty crazy seeing the damage from the wild fires. Multnomah Falls is closed, as are a lot of other popular hikes in the Gorge. I posted some photos on my instagram. It was really sad, and kind of shocking, to see the damage in person. I think I-84 only opened up a week ago, too. It’s been closed for almost a month I think. Crazy.

We stopped at Double Mountain Brewery for lunch. Logan did great. We timed the drive right and he napped for an hour on the drive so when we arrived he was ready for lunch. We also lucked out and got there before the mad-rush for lunch. Usually there are super long lines to get in.

We got a pizza and I got three tastes: Killer Green, Killer Lion and Hop Lava (all IPAs). 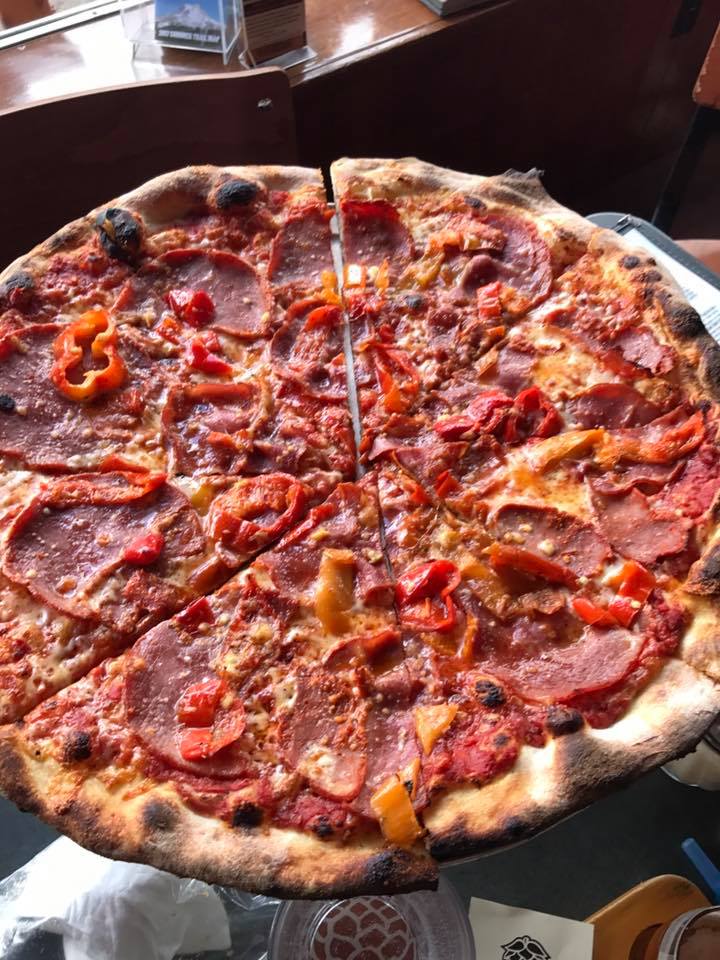 It all really hit the spot. After lunch we stopped at Cathedral Ridge so we could pick up our quarterly case of wine from our membership (like 2 months late–partly because we had no time and partly due to the wildfires). I was surprised at how few people were there on a Saturday afternoon. Usually the tasting room would be super packed. I guess a lot of people haven’t ventured into the Gorge since the fires. 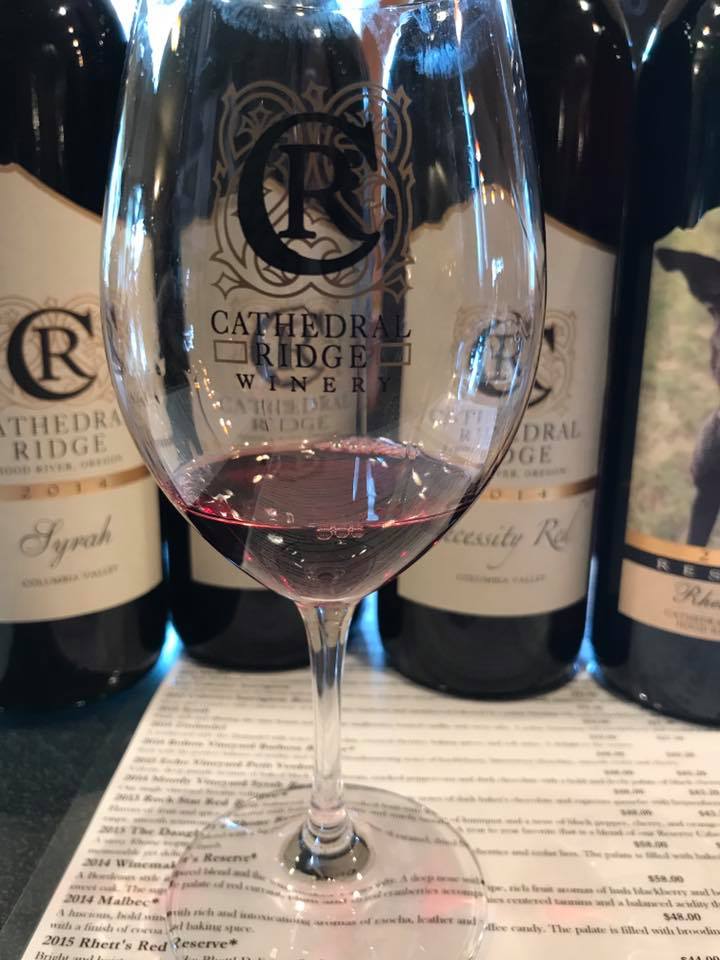 Then it was time for pumpkins!

We got to Packer Orchards near the Wy’East Winery after lunch. We discovered it last year around this time when Logan was an itty bitty baby! This year was SO much fun because Logan is big enough to DO stuff now! He was so excited when we got there. He was ready to explore! 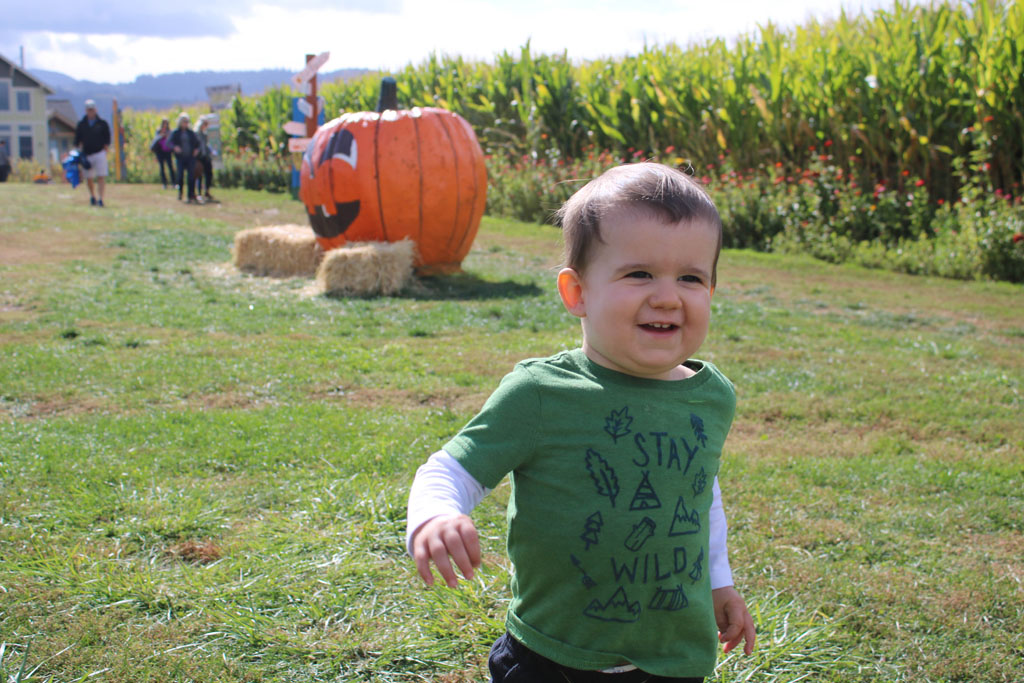 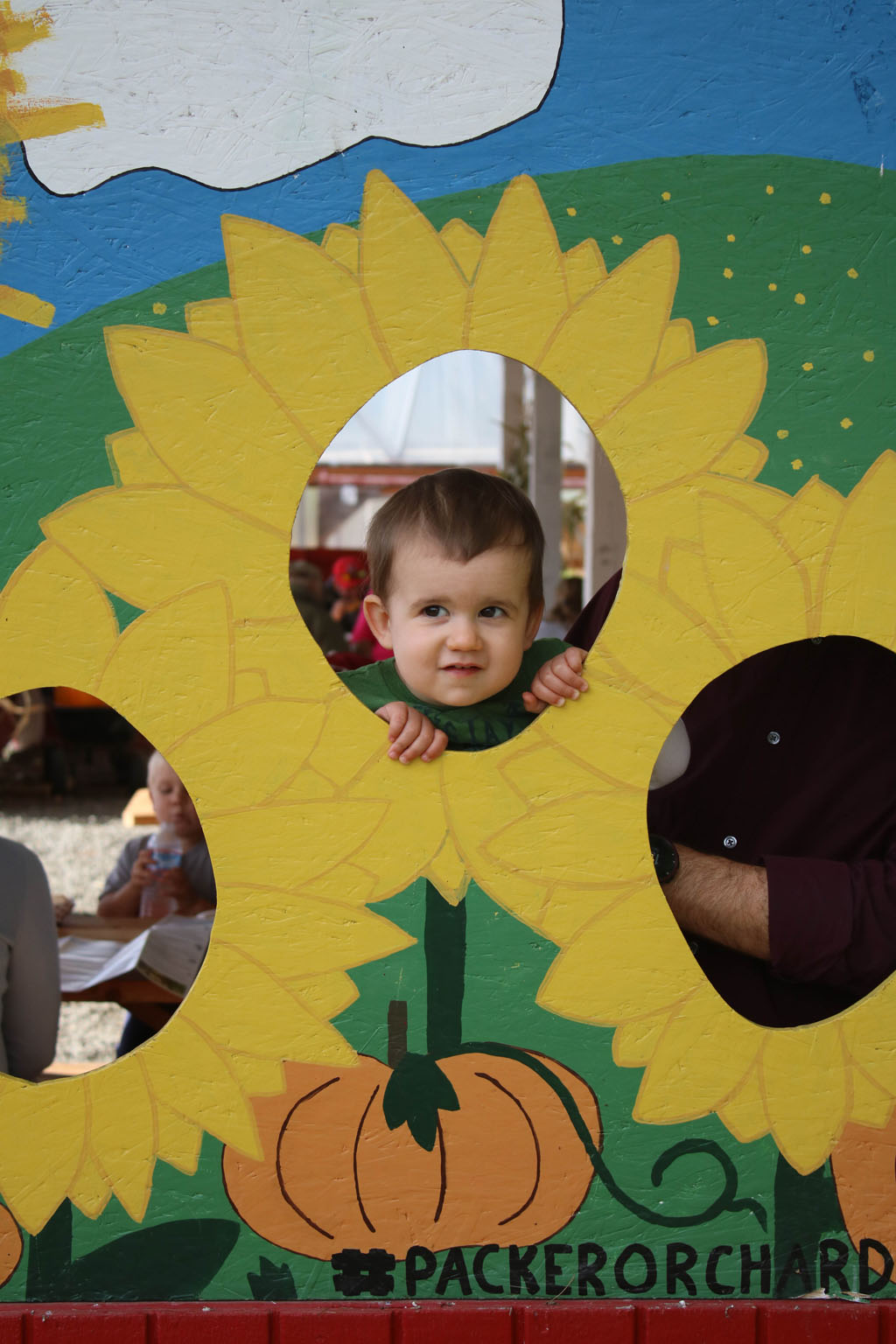 We chose not to do the corn maze/hay ride extravaganza this year. Logan is still a bit too young for that and it was about $20 for a family to do all the activities together. Next year I think it will be great! The nice thing about Packer Orchards is that there was TONS of stuff to do for free. They had the places you could take photos and the giant pumpkin, of course. 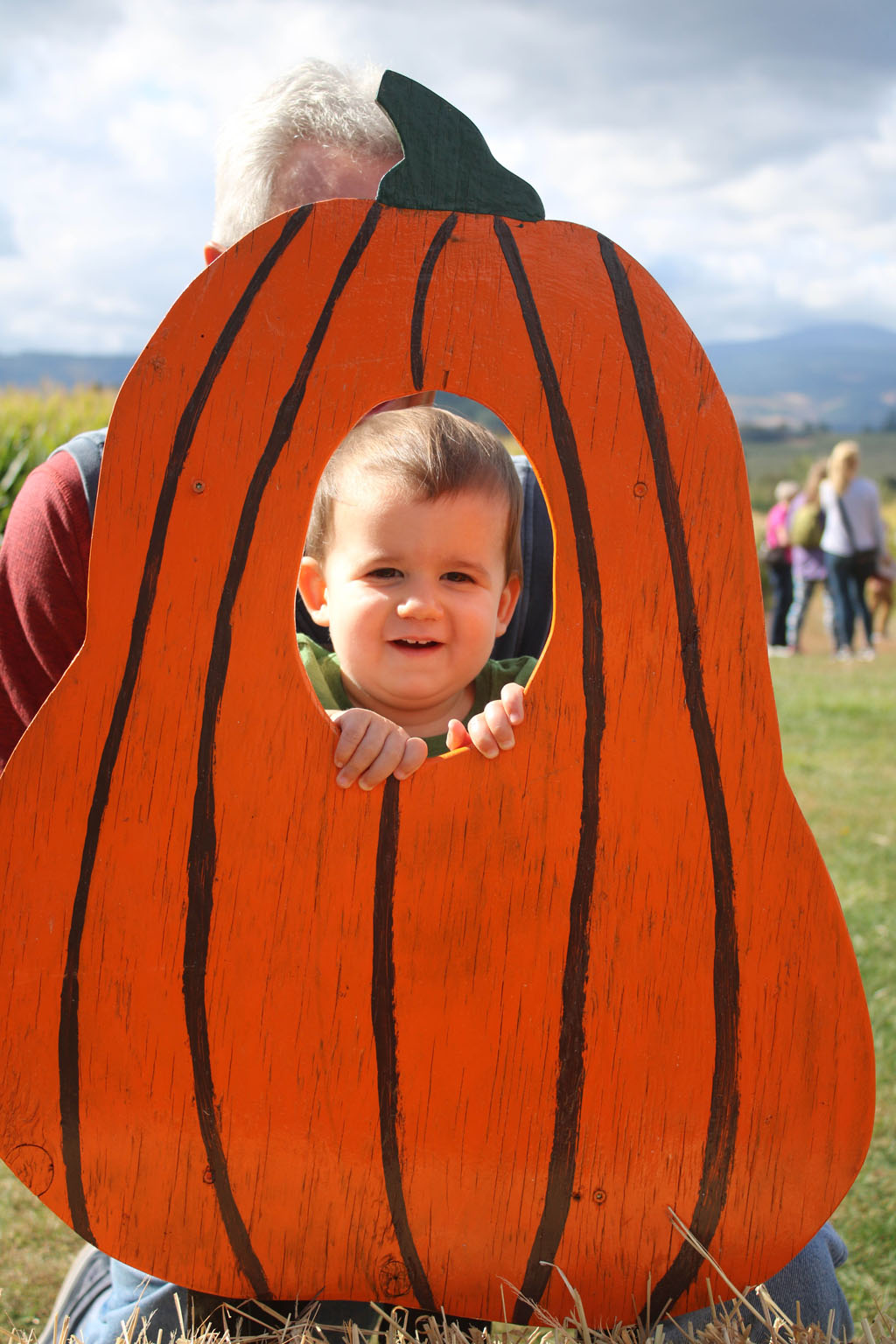 Logan was sort of good while we tried to take photos. 😉 He was just too excited and distracted to sit still for long. 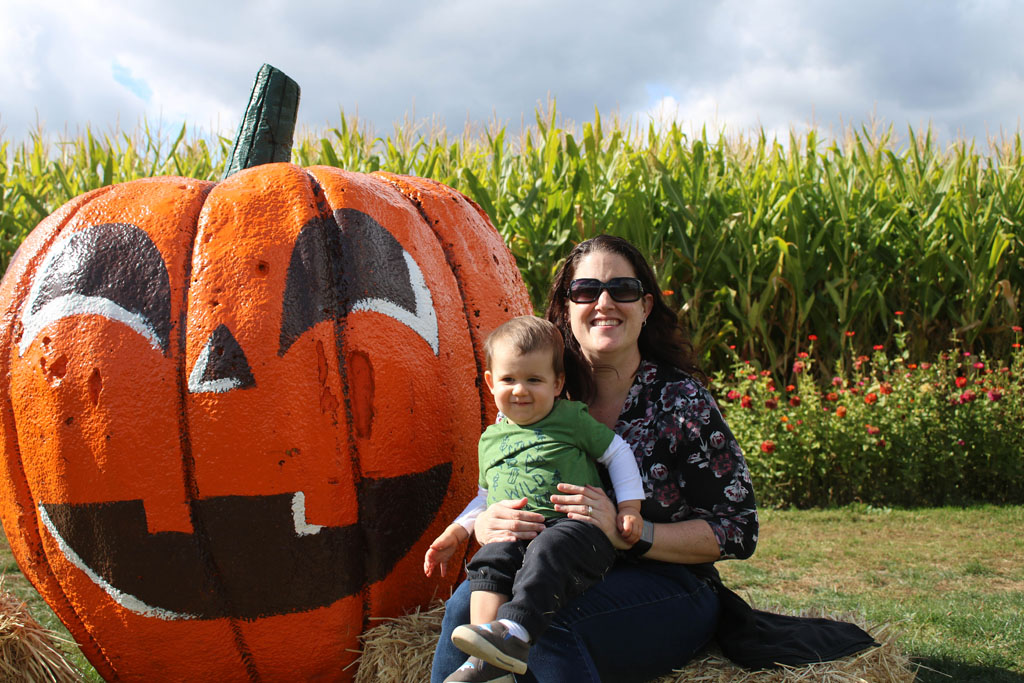 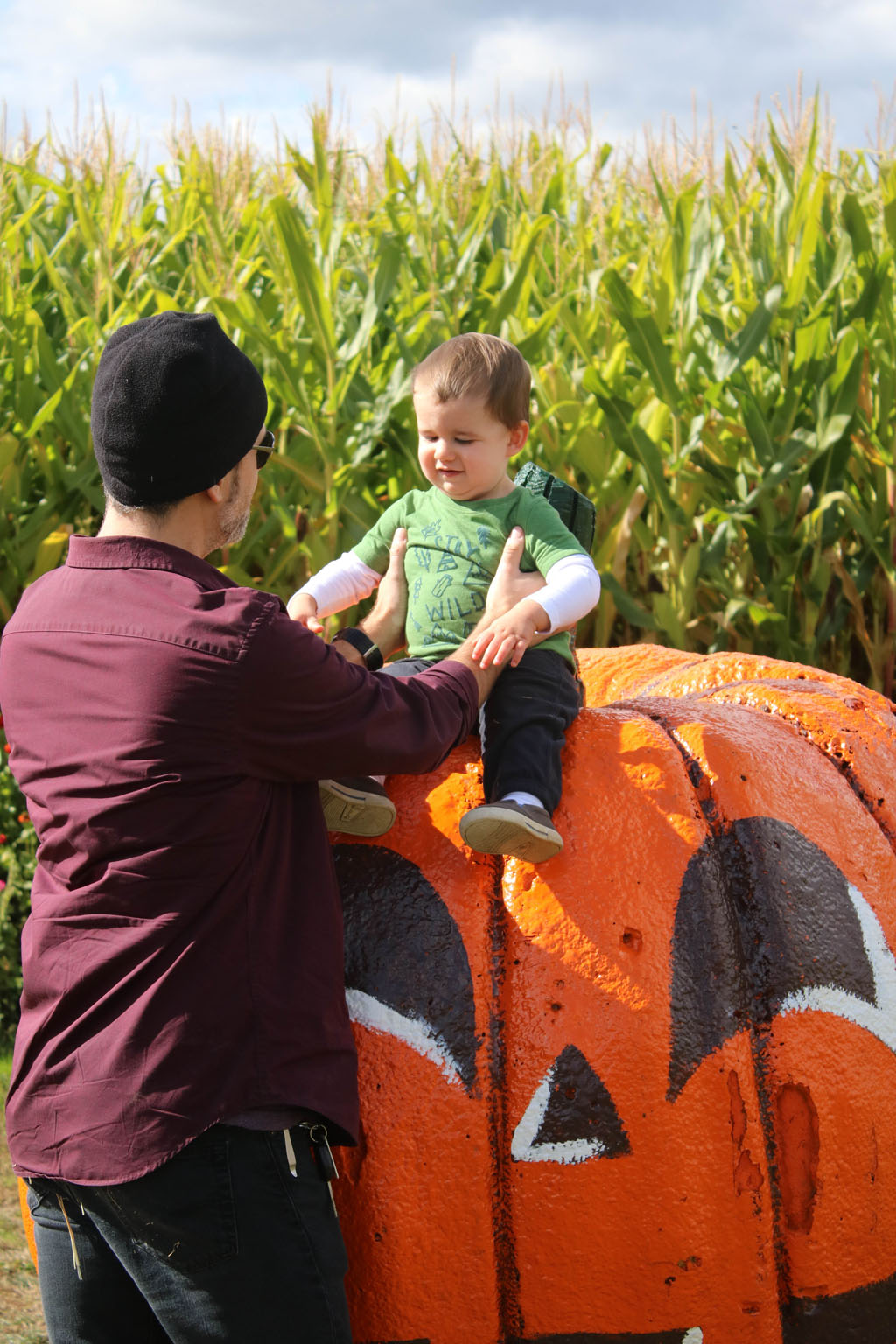 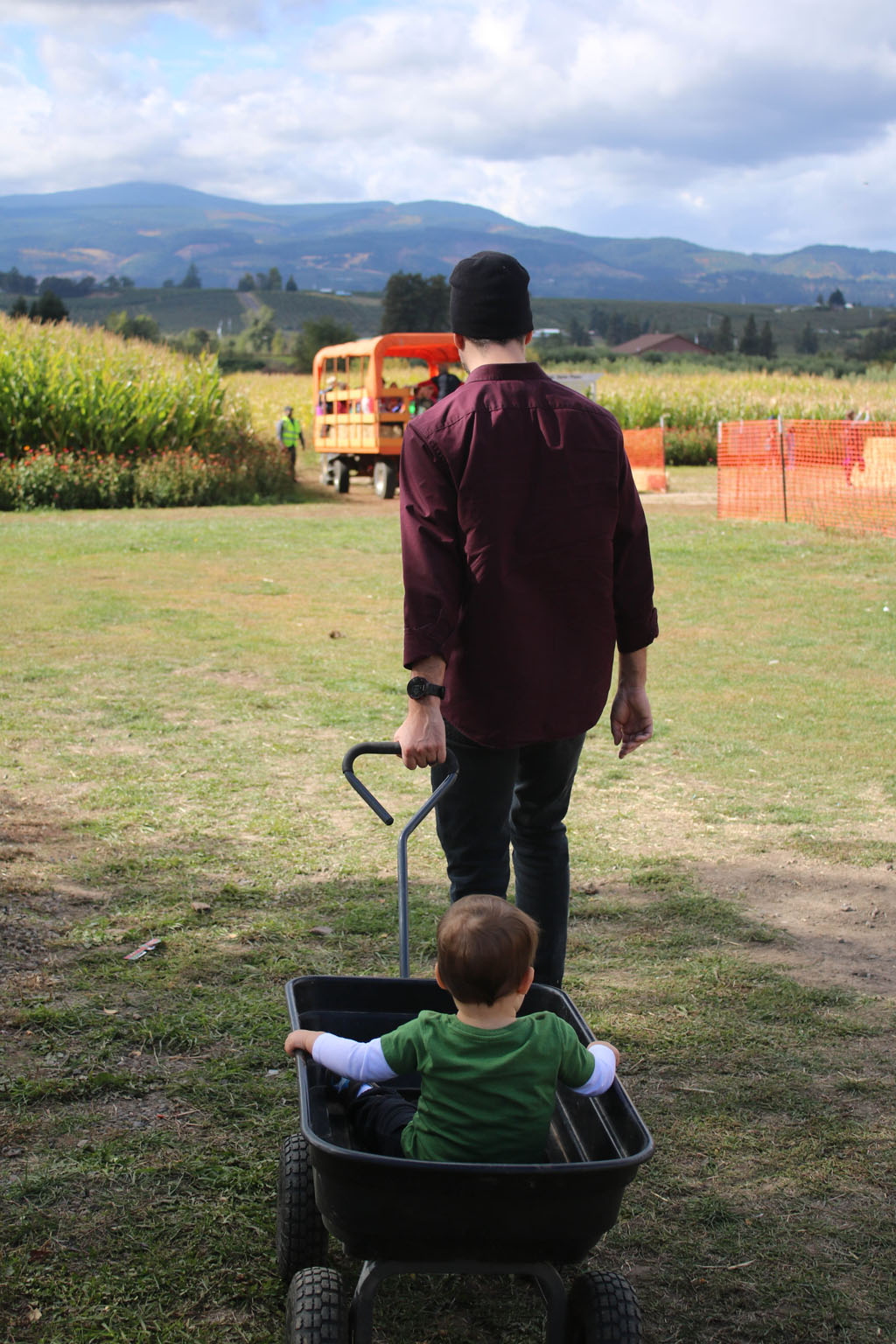 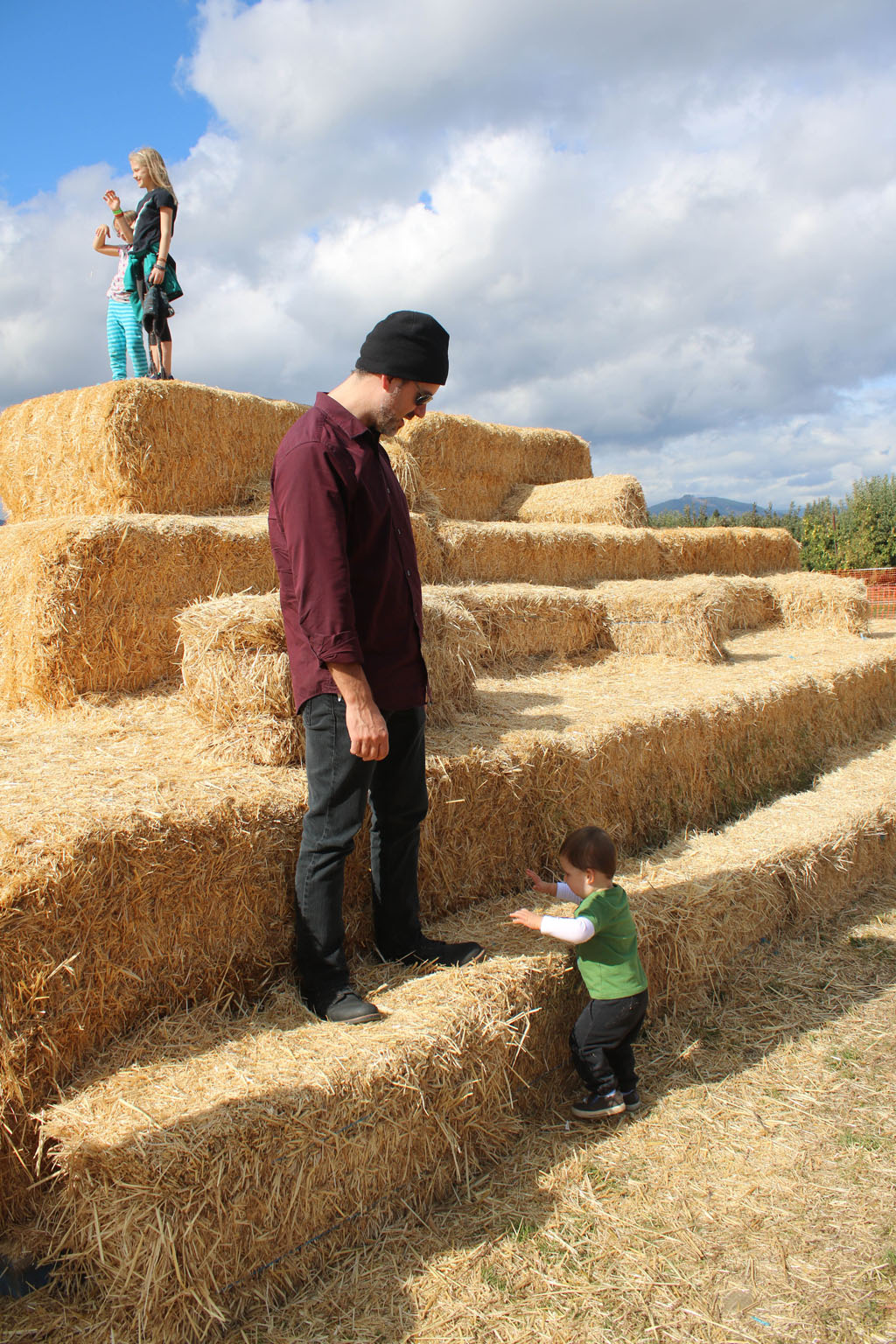 There was a giant (free) hay stack that kids could climb and play on. The hay rides looked really fun. Next year! Then we discovered that there was a giant “sand box” that was filled with dry corn! Wow! It was so cool. All the kids loved it. Logan wasn’t quite sure at first and then he loved it. What a cool idea. 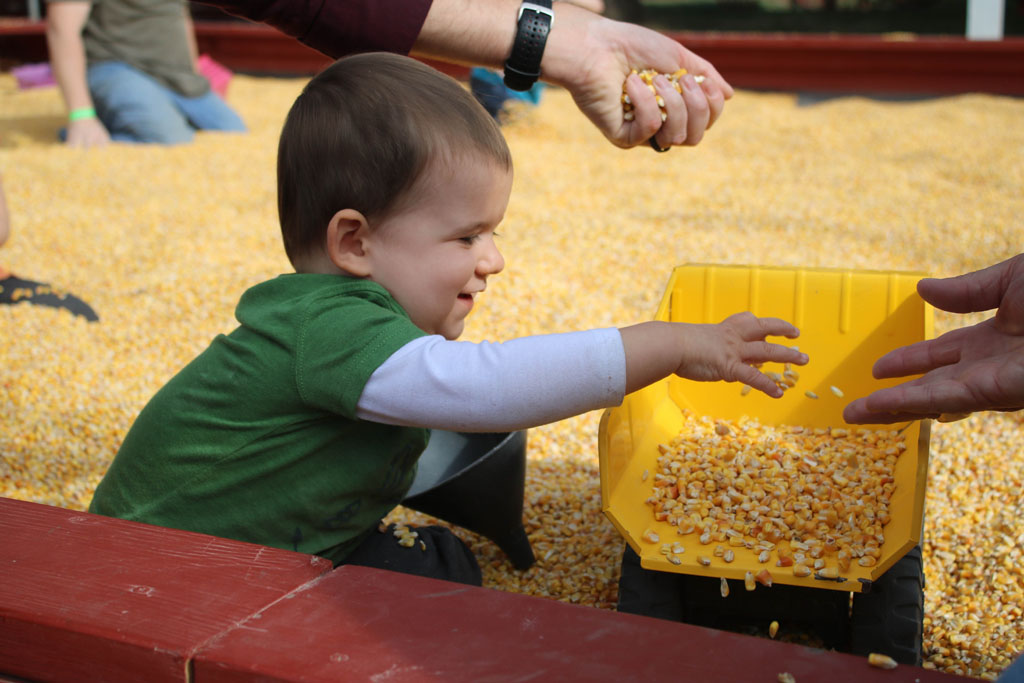 So we walked around a bit and then decided it was time to pick a pumpkin. Logan zeroed in on the one he wanted right away. 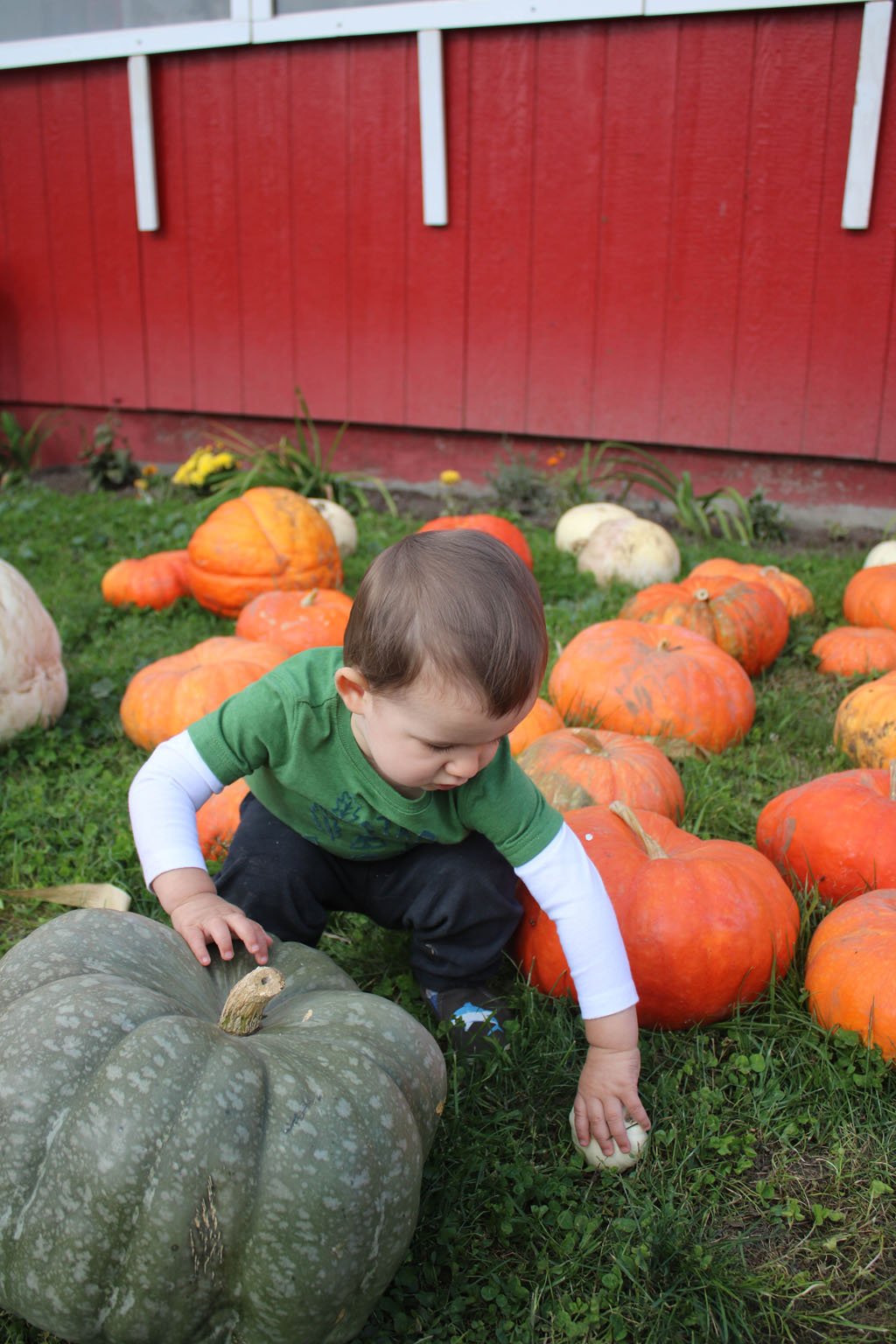 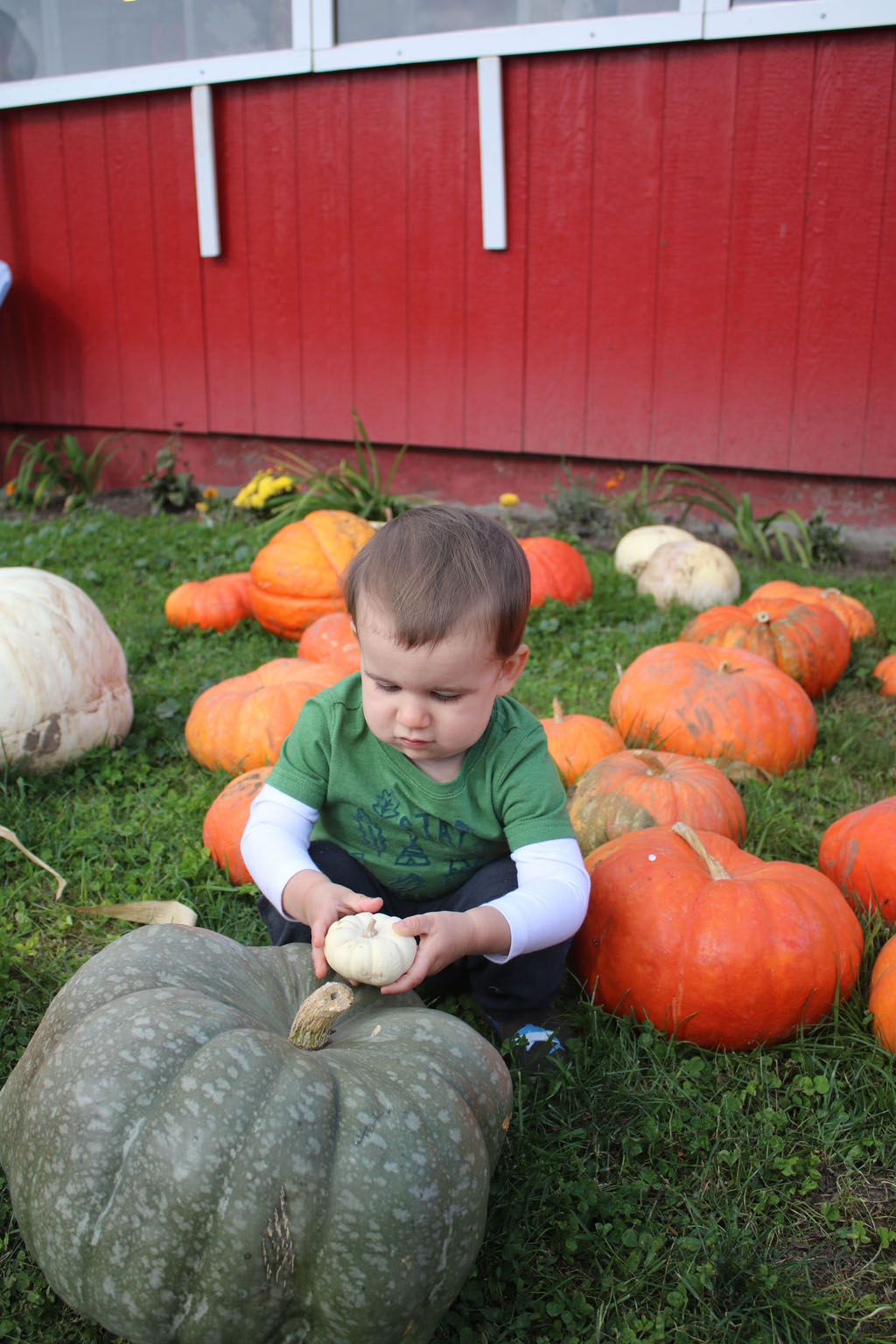 He picked the tiny white pumpkin that fit in his hands. We tried to get him to pick another bigger one to take home, too, but he wasn’t having any of it. He just wanted his tiny pumpkin!

And Packer Orchards was super sweet, we went up to pay for it and I guess because it was so small (and Logan is so cute LOL) they said it was free. Sweet! 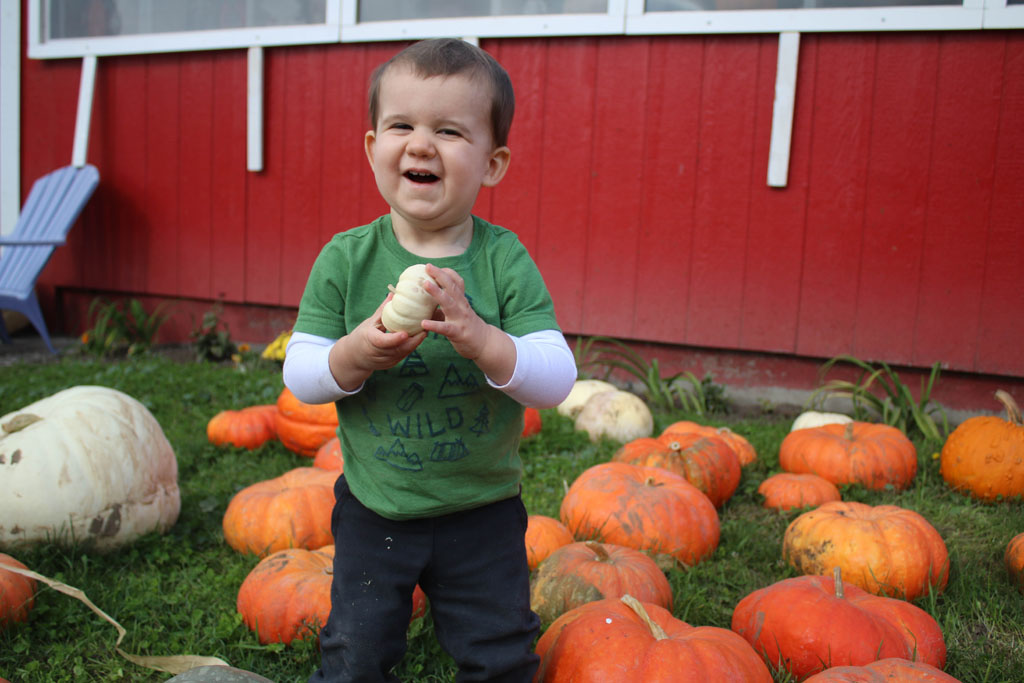 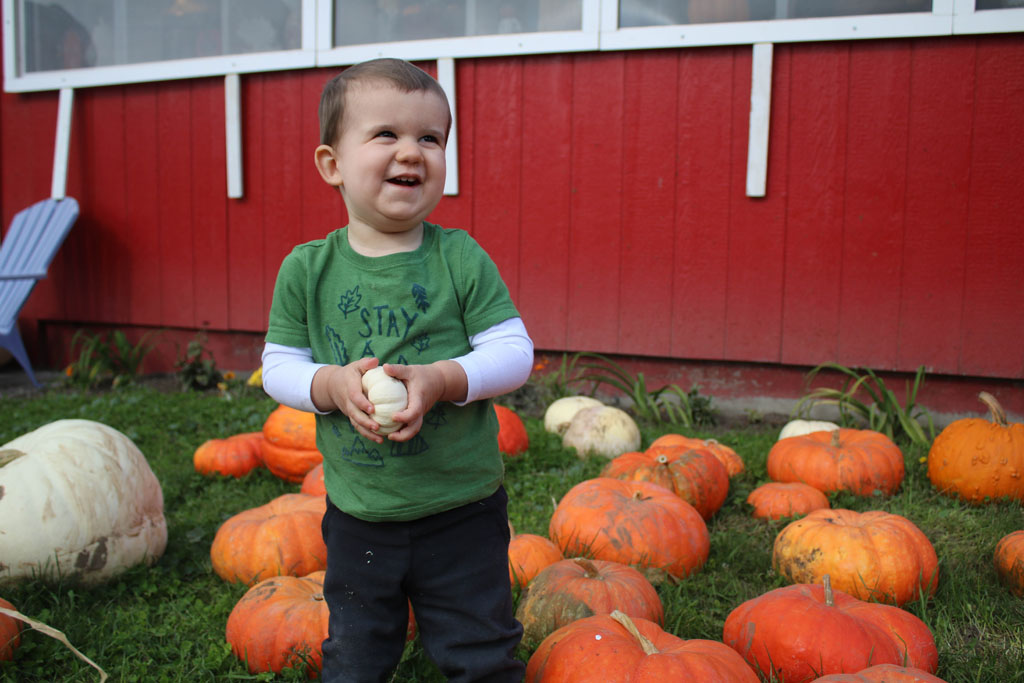 The above two photos are my absolute favorites of the day. He looks so dang cute! I am so glad we went and had a great day. It was such a fun, sweet outing to see everything through Logan’s eyes. Everything was amazing to him and he had a blast. Can’t wait for next year!

It was getting late in the afternoon so we got three pipin’ hot fresh out of the fryer apple cider donuts to go and Logan loved that, too. Of course he did! He’s my kid. 😉 And we headed back to Portland.