I got a great comment from a reader, Beth, who had a few questions. I started typing out a response and realized that I was going to be very long winded so why not just make a whole post about it?

“I’m having trouble fitting in everything I want to do – maybe I need a schedule like yours. My primary training is biking, since I’ve got Reach the Beach in 2 weeks and Cycle Oregon in September, but I do want to squeeze learning to run in somewhere too.”

I had the SAME problem. I still have that problem. My currently workout schedule is working okay but I am struggling to find time to fit in a run three times a week like the Couch to 5k app says to do.

Weight lifting was my priority for the last two years. It was both to help tone and get rid of some of the body fat that has plagued me since I lost 100 pounds but to also heal my injury. I had imbalances in my body and that was resulting in my knee pain. The weight lifting (and the kettle bell gym) did wonders! It was so beneficial and I attribute my current injury-free state entirely to weight lifting. More so than physical therapy ever did for me.

Recently Suzanne wrote a post for me called Why Recover? In it she said: “When you add something, you have to take something away.” Seeing that in print was a big lightbulb moment. Duh! There isn’t enough time in anyone’s day to do EVERYTHING. So what is the priority?

For me the priority is strength training at least twice a week and yoga once a week for injury prevention and then running because I’m training for my 5k. But what about my swimming?

Swimming is something close to my heart. I love it, it’s meditative for me, it’s relaxing, it’s a must. I will always include that in my schedule. So maybe that means I have to cut back on something else. Maybe it’s something I do every other week instead of every week so that I can include other things I like.

My fitness schedule changes with the season. It’s really easy for me to lift weights and swim and do yoga in the winter. When summer comes, some of those things fall back and the priority becomes doing stuff like biking to work and going for hikes with Michael and the dog. While I am frustrated that I can’t always fit in 3 training runs a week, I’m okay with the 6 week program taking 12 weeks. It’s okay to repeat a few weeks in a row because I didn’t get to that third run. I’m trying not to put pressure on myself by saying I HAVE TO RUN!!!! 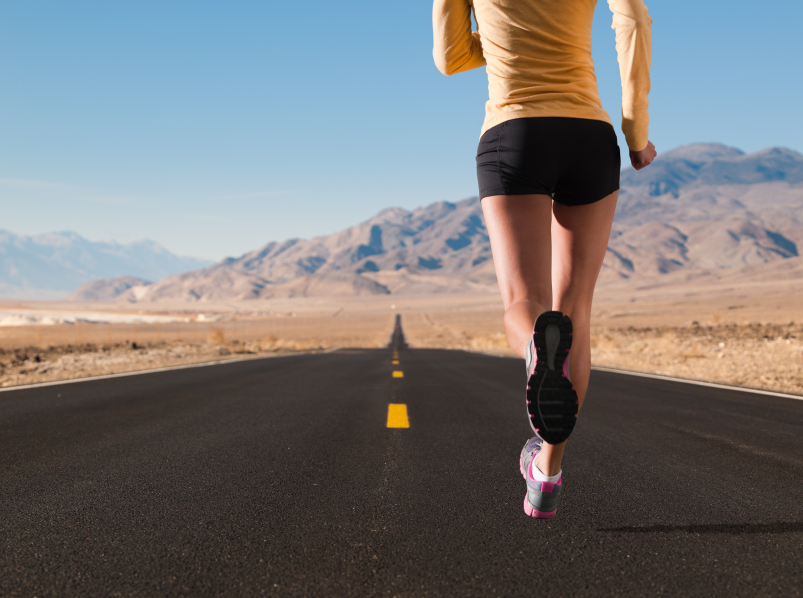 The next question is more about injury. She asked:

“Is it normal for my legs to BURN from the knees down when running? They’re okay when walking and when not running… I can’t tell if I’m out of shape or if I have bad shoes or something. Any thoughts?”

When I signed up for Couch To 5k I had many months (like 6 months) to train. I wanted to give myself enough time to SLOWLY get back into running. History has proven that I need to take it easy and not increase mileage too quickly.

I’m not a doctor or physical therapist obviously, but I do have an extensive injury history. My first thought is that maybe it’s the wrong kind of shoes. OR it’s time for new shoes. Read this post about shopping for running shoes: Is it Time for New Shoes? I really think all runners should get fitted for shoes according to their stride. It’s so important in injury prevention!

If it’s a nagging ache it could just be that it’s a new activity. Running is Hard and it uses muscles we may not have used doing other activities. Take it slow, follow a running program, don’t push it too far too fast. Learning how to pace yourself while running is also crucial. It’s really easy to go FAST out the gate and then burn out before you’re done running.

If it’s pain in the shins, it could be shin splits. That can happen to new runners who aren’t conditioned yet for running. It could also be OLD or BAD shoes. If it’s the wrong fit, they could be hurting you. It could also be that running on the street is too much for you. Try a treadmill or a track to see if the softer cushion helps.

When it comes to injury, I’ve had a few and I’ve written many posts about the subject. Here is a little list of some old posts:

Coping With An Injury

I’ve had a lot of aches and pains with running and wondered, Uh oh, am I injured? But I will tell you this: YOU WILL KNOW IF YOU’RE INJURED. Trust me. The REAL injury pain is obvious. There aren’t any doubts. When I first got overuse of IT Band I diagnosed myself while I was out running on the track. I knew it. I just had a gut feeling that said “this pain is different.” And it stuck around and when I saw a doctor I was right.

It’s so important to listen to your body and if it’s telling you something, take note. Don’t try to push through an injury. It will just make it worse and longer to heal. Also, you can get Runner’s Knee from other activities–not just running! Just like getting fitted for good running shoes, go get fitted for your bike! It makes a world of difference. Read: Professional Bike Fit & New Doctor.

I hope I answered your questions. I’m not an expert in running by any means but hopefully some of my experience can help other new runners in their journey.