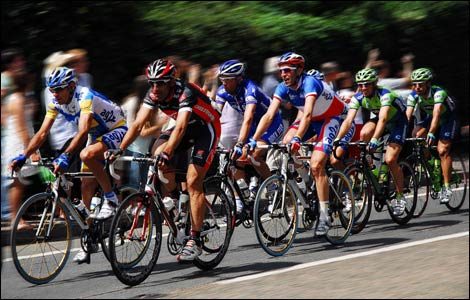 Lisa’s Note: Michael’s first post was so popular he’s back! He has a lot of really good information on how to buy a bike and since I’m a newbie I defer to him. You may not be on your way to Tour de France, but read this post with an open mind before you buy your bike.

First off, thank you for all the wonderful feedback on my first article How To Watch More TV. Your responses have encouraged me to write this follow up piece which is rather long, so I’ll break it up between two or three posts.

A few of you said that you love TV but you didn’t have a bike. This is a problem. How are you going to watch your favorite TV shows without a bike? Allow me to help. Here is how to shop for and buy a bike, part one.

As an adult, there are basically 4 types of bikes to choose from:

Your first decision is to figure out where you intend to ride your bike. This is really important. Do not buy a mountain bike if you’re never going to ride it in the dirt. A mountain bike is not cycling’s version of the SUV. Unlike SUVs, these vehicles are not fun to operate on paved roads. They are more difficult to ride on pavement than road bikes or hybrid bikes.

If you have preconceived thoughts about cycling or the way people look riding them in your head already, you need to forget them. You cannot go into a bike store thinking, “I don’t want to wear that skin tight clothing or ride a bike with road handle bars on it”. You’re shopping for a bike. Not the clothing, not the lifestyle, just a bike. And beyond that, I’ll bet that most of your thoughts about features that you’d want in a bike are actually the things that you don’t want in a bike. Seriously.

We’ll start with cruisers. These bikes are for people that want to look cool riding and are lying to themselves about exercising. They think they’re getting exercise without looking like they want to get exercise. Every time I see someone on these bikes they look miserable. They’re either struggling or out of breath — always. If you buy a cruiser, you will hate it, trust me, you will. Why?

Well first off they’re heavy. Really, really heavy. These bikes tend to weigh in at around 35 lbs. Now that might not sound like much, but you’ll feel all 35 of those pounds on the very first hill you encounter. As you’re walking your bike up that hill, you’re going to get tired fast. Your arms will hurt. Your lower back will hurt. And obviously your legs and rear end hurt because you couldn’t actually ride up the hill in the first place and now you’re pushing it up the hill!

Second, these either have only one gear or have a limited set of gears. These bikes are not made for performance. You cannot go very fast on them, nor can you ride them up any hill of noteworthy size. I don’t know what it’s like where you live, but the roads around here are filled with hills.

Third, you sit totally upright. This sounds good at first, right? I mean, you already know that you can sit upright for hours on end and who wants to be hunched over? That can’t possibly be comfortable. The real problem with sitting upright on a bike is that the bulk of, if not 100% of your weight, rests solely on the saddle (some of you call this a seat but that is not what to call this. It is a saddle. If you call it a seat at a bike store, they will think you’re dumb. So don’t do this. Unless you want them to think you’re dumb, which I can’t think of any reason why you’d want someone to think that.) Anyway, if you sit in a very upright position on a bike, you’re going to be sore. Let’s say that you weigh 200 lbs. That’s 200 lbs of weight solely planted on the saddle. And every time you hit a bump, you’re going to feel it and you’re not going to like it.

Maybe you think I’m wrong about reason number three or that you can get a big cushy saddle which will offset any discomfort related to sitting upright. Well, you’d be wrong again. These large cushy saddles are going to increase the amount you bounce which is going to lead to back pain. Since they are wider, they’re also going to increase the amount of friction on the back of your thighs and rear as well as the inside of your thighs. And as you pedal at an average of 90 RPM, you’re going to experience a lot of friction which will lead to saddle sores and bouncing, which will lead to back pain.

Simply put, cruisers will make you miserable. When you’re out and about, look for people struggling on these things and be happy that you’re not someone that owns one.

I’ll write about what you actually want in a bike in my next post.

QUESTION: What kind of bike do you have? If you don’t have a bike, what kind were you looking for before you read this post? Has your opinion changed?