I thought I’d give a bit of an update…we’ve been…busy this past week!

First, I have to say: Friends are amazing! Last week a dear friend seemed to just know we were struggling and needed help and offered to drop off dinner. She picked up amazing pizza and salad and it was SO nice of her!! Michael was basically bed-ridden at that point. 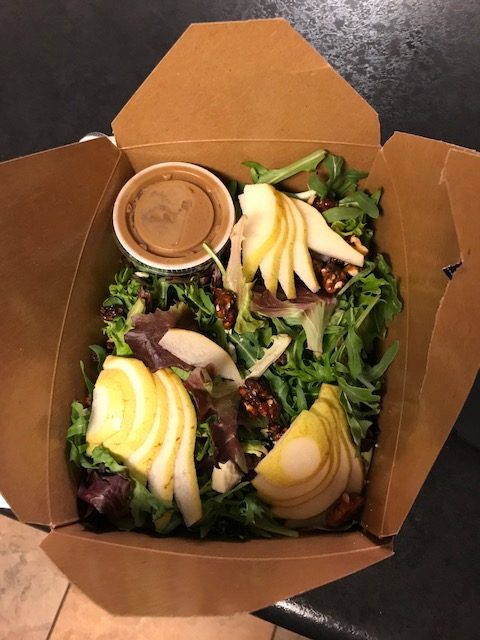 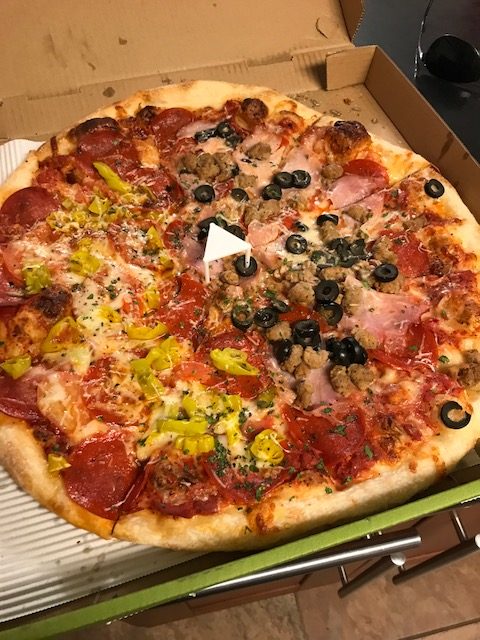 The pizza was great and we had leftovers for several meals.

I’ve been trying to do everything and taking care of Logan, the animals and Michael. And working. And doing house chores and trying to still work out. It’s a lot. I feel like I’m not doing any of it very well right now. The meal was very nice and helpful and made me feel some relief.

Michael’s mom brought us ham and bean soup (delicious)! (And over the weekend she came to babysit and brought us a casserole.)

In better news, Logan got his first Valentine! 😉 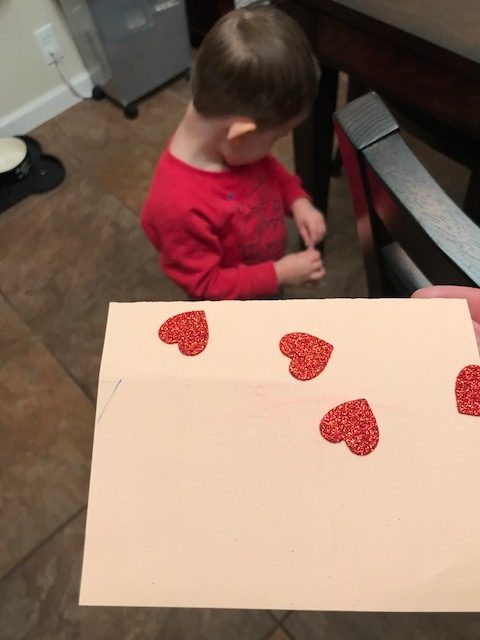 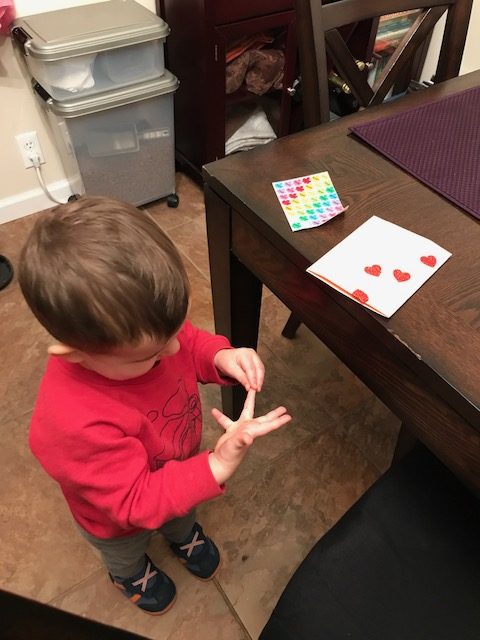 A card made by his BFF Winnie and some stickers! So cute! Another friend dropped of chocolates and a balloon! Logan is popular. 😉 He had a Valentine’s party at daycare and that looked like fun. Plus, mommy and daddy got a valentine from Logan! 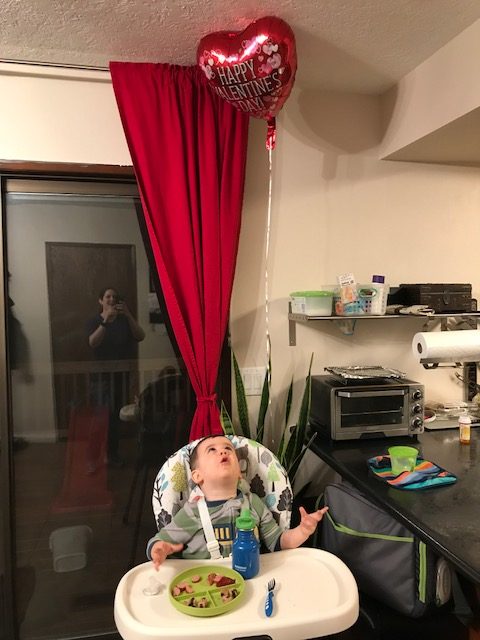 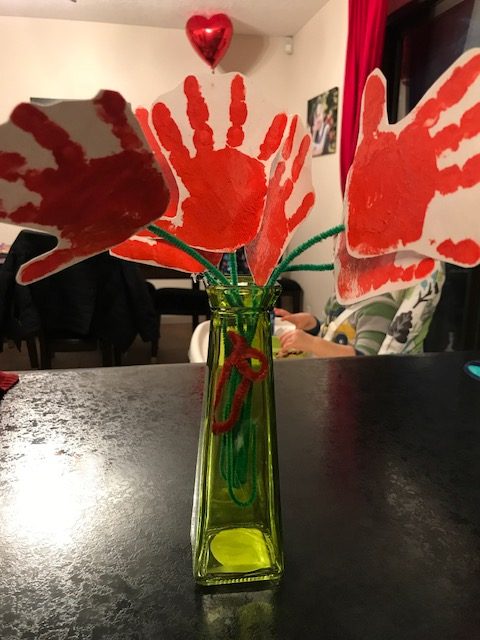 Michael and I had leftovers for dinner on Valentine’s Day. Then…his back went completely out. He couldn’t walk or stand or lay. He ended up going to the ER. At least I can cross off “hot firemen in my bedroom on valentine’s day” from my bucket list…?? 😉 Made me think of that Friend’s episode. 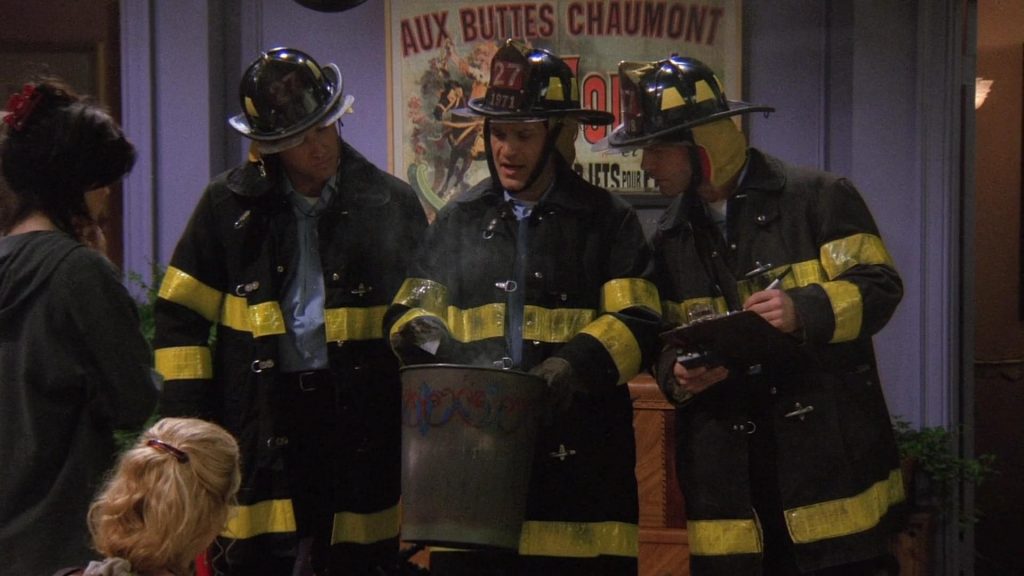 Family came over to be with Logan and I went to the ER with Michael. He ended up getting an MRI (thankfully) and he has a herniated disk. I stayed late at the ER until he was going in for the MRI. It was going to be several hours for it and I had to get home for Logan.

I was in bed by midnight and got a few hours of sleep. I got Logan up and to daycare, went to work for a few hours, then left and went to the hospital. They aren’t doing surgery immediately. The heavy-duty meds Michael got in the hospital seemed to help a lot and relax whatever was going on and pinching the nerves. So after spending almost 24 hours in the hospital, he got to come home! 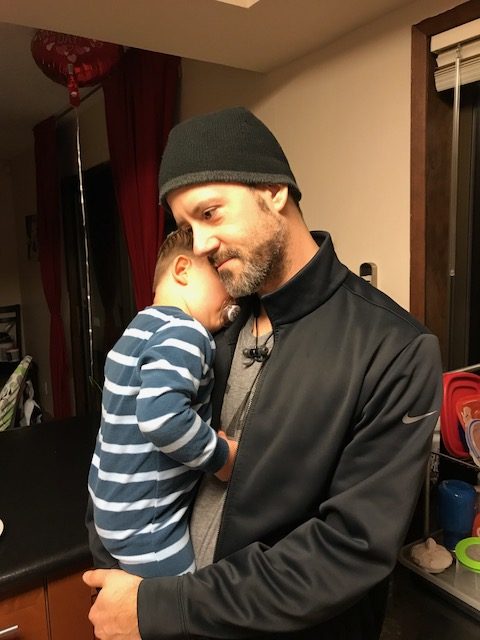 And he got to hold Logan for the first time in 6 weeks! We were all happy. <3

My cousin Anna hired some babysitting to help me out. A friend of Michael’s picked him up from the hospital because I had to go pick up Logan. It was SO nice how many people stepped up to help out. We have the best friends and family.

He’s doing better. He has a lot of follow-up appointments (Neurosurgeon, PT, spine clinic, his regular doc, I don’t even know what else). I hope we get some good answers for treatment. I really dislike that doctors just want to “manage” stuff like this with pain pills. That DOESN’T FIX the problem. And with a lot of people, it causes more problems. Neither Michael nor I are really pill people so we’re both determined to find another answer to fix this.

So it’s been an overwhelming, stressful week! Sheesh.

I’ve waited to share this post for a little while partly because I didn’t want my blog to become too Negative-Nancy and partly because I wanted to wait until I had more information to share. My sports medicine doctor informed me of the MRI results. It didn’t take long. I got the call on Wednesday the 17th in the morning. Then huddled in an empty office talking to Michael on the phone and trying not to cry. Then my parents.

There’s good news and I’m trying to focus on THAT. Nothing is torn. I don’t require surgery. That’s good. The original diagnosis: A sprain in the inner ligament of my knee and mild swelling of the joint between the knee cap and the thigh bone. I was referred to a specialist.

I was most definitely an emotional wreck about this. While it’s not worse-case-scenario bad, and I recognize that it could be much worse, it still felt like a pretty bad diagnosis. Maybe I was foolishly hoping that my doctor would call and say I was fine and I’d be magically cured. Who knows.

There are a lot of other issues that swirling around in my psyche as I digest this diagnosis and news. Yes, I am a confident person and successful in my weight loss and have kept the weight off for 5 years now. But that doesn’t mean I still don’t have the occasional fear in the back of my mind that at any moment I could gain all the weight back. It’s an incredibly difficult toll on my emotional state at the moment. Exercise is also something I love to do. I don’t feel good physically, or mentally, if I take a bunch of time off.

That being said, I have followed all of my doctor’s and physical therapist’s instructions and restrictions. I’ve done all the PT exercises they recommended diligently (and recorded it in my journal). I asked every provider I saw along the way what activities I COULD do, what I couldn’t do, and what timelines I was looking at. I was responsible. I listened to their instructions and I also take 2 rest days a week no matter what. And yet, I still got injured. It’s frustrating for sure.

The specialist I saw was an orthopedic surgery who specializes in sports injuries and knees. I had 7 days of waiting, anticipating, dreading and stressing about the appointment. I had butterflies in my stomach when the day finally arrived. At least it was a sunny day. I was the youngest person in the lobby. 😛 Discouraging.

The specialist was nice. He liked that I had typed up a timeline with details to my injury, what treatment I’d done so far, what worked, what hadn’t, what I thought were the triggering episodes along the way. He did a bunch of tests on my knees and announced that structurally I was sound.

He went over my MRI results, which was kind of cool to see, and explained everything. He disagreed with the radiologist and said my knees were NOT sprained. Good news. He said my cartilage was good; my joints were great; no tears. All good news.

So what’s the verdict? Mixed. He said basically it was runner’s knee (which is overuse) and ordered me to rest my lower body for 6 weeks. He said he was going to treat it like a stress fracture (even though it’s not) and that’s pretty much it. He said if I had horrible pain walking, I’d be leaving in a wheelchair or crutches. I said I had discomfort but that that was a stretch in my opinion. 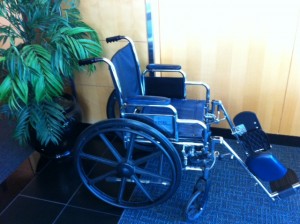 NO LOWER BODY ACTIVITY. Beyond walking around, obviously. But no walking for fitness. No squats. No running. No biking. No stairs. No elliptical. You get the point. What can I do? He said I can do yoga, I can swim (no breaststroke), I can do upper body exercises like weight lifting.

After 6 weeks of rest and no pain, I can start slowly introducing things back into my routine. The plan is to do an activity in SHORT DURATION and MILD INTENSITY. Basically, starting over. I am to increase the activity and duration by 10% each week and if there’s one week I have any pain, I have to rest the remainder of the week and go back to the previous week’s duration and intensity.

It’s not all bad news. At least I have a plan. At least I can do some activities to keep me sane and not spiral into depression.

That night Michael took me out for dinner because I was home moping (and watching Upstairs, Downstairs). We went to Cartlandia, the food cart area right off the Springwater trail. I’m glad he made me get out of the house and enjoy the sunny evening. 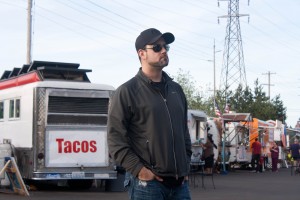 We got an appetizer to share from Kesone Asian — the jalapeno and cream cheese wontons. Holy smokes were they spicy! They were also bigger than we were expecting but oh so good. I loved how spicy they were. 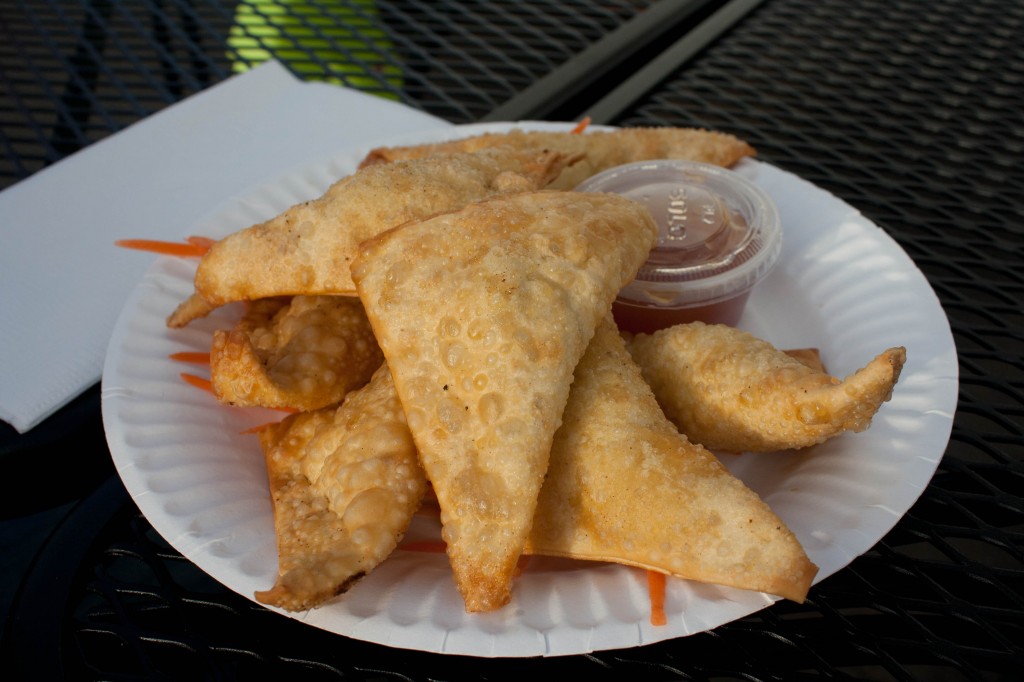 There were so many choices. I love the carts because if you can’t agree with your mate on what kind of food to get, you each can get whatever you want. There was Mexican, Asian, Russian, burgers, gyros, pizza…You name it, it was there. We ended up going to the Good and Evil Wrap Company and that might be my #1 favorite food cart. While we were looking at the menu, another couple came and apparently they eat there a few times a week and were gushing about how delicious the wraps were. 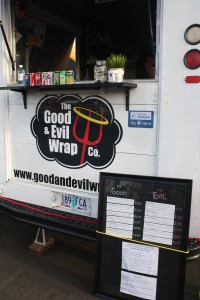 Their menu was creative and divided by “good and evil” (healthier and not as healthy). 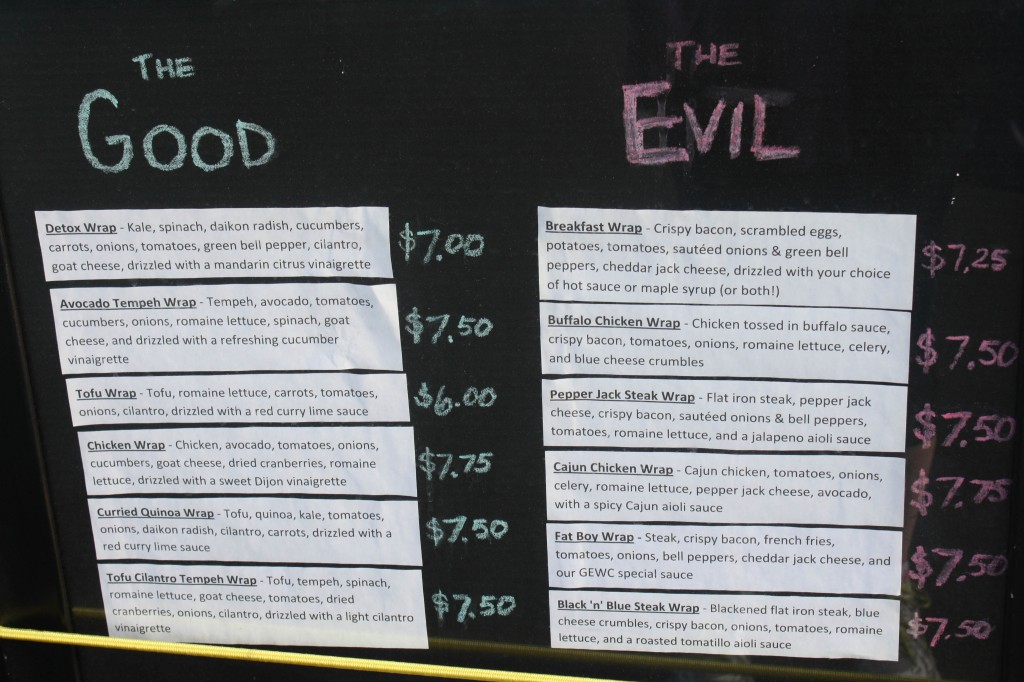 Michael got the Pepper Jack Steak wrap but got it as a salad instead. I had a bite of his salad and it was spectacular. The creamy dressing was flavorful, the fresh avocado went perfectly with the pepper jack and steak. 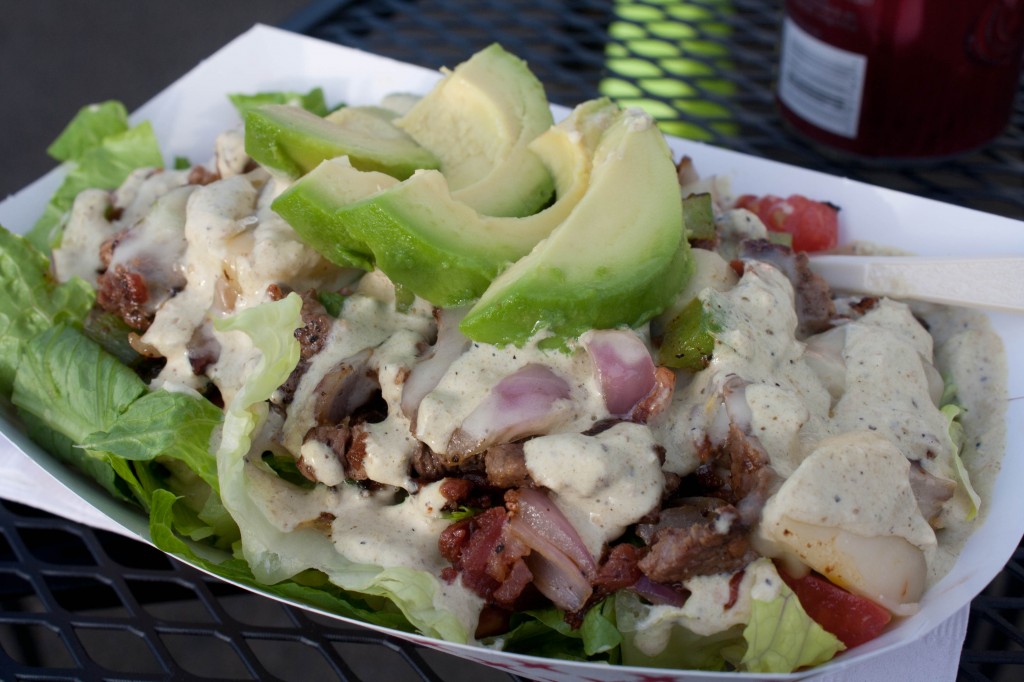 I ordered the Buffalo Tempeh bowl. Next time I want to try their wraps! Originally I wanted the chicken buffalo salad but he was out of chicken. I went with tempeh instead. I realized that I have never eaten tempeh before. I thought I had but it was definitely a new thing for me. It was kind of weird–like flavorless rice baked into a stick. Sometimes there was a nutty flavor but overall it was pretty bland. Can’t say I’m a fan of tempeh! 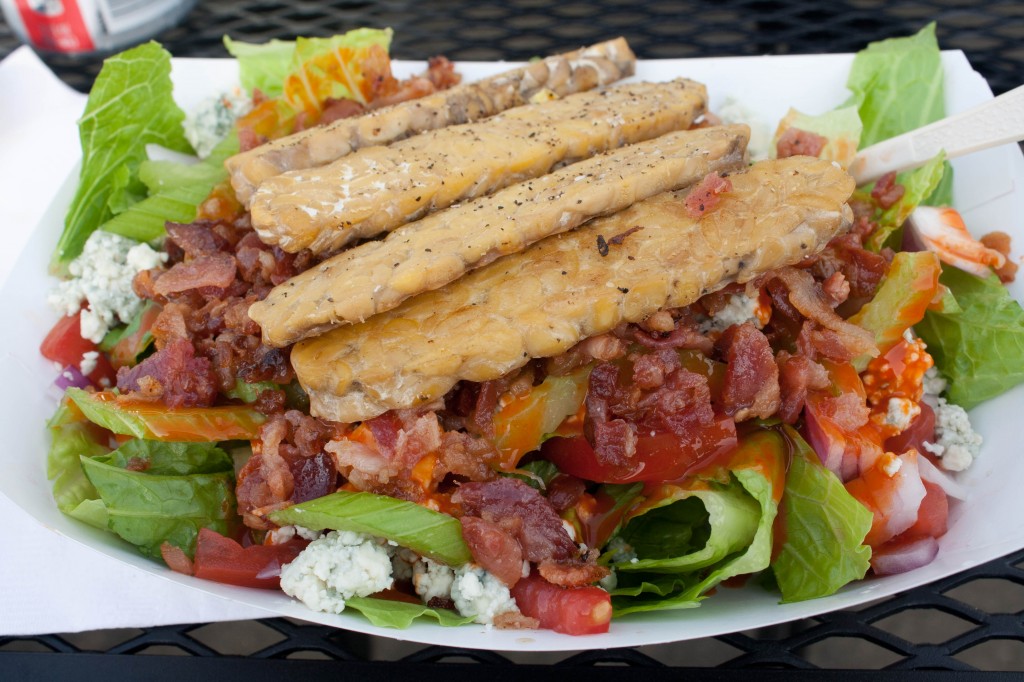 Doesn’t my salad look divine? It was SO GOOD. I’m going to be craving it for awhile, I can tell. It had lettuce, tomato, blue cheese, bacon, onions and celery in it. The dressing was buffalo sauce flavored and tangy and delicious. I want to go back NOW!

I’m glad we went. It was a nice evening. I needed to get out of the house. Like I said before, I was kind of moping and crying that I was defective. Michael assured me I wasn’t and he still loved me. Awww, kudos for saying the right things. 🙂 I’m going to be looking into other activities I can do that I previous dismissed because I wasn’t interested. Maybe I will find something else I really like to do besides biking and running!

QUESTION: Tell me some good news from your world and describe your favorite wrap!