Now for the exciting part of the ride….

There were a lot of single lane bridges that we rode across. They were very cool. We rode along the Little Nestucca River for a lot of the ride.

You can sort of see the river through the trees in the above picture. The temperature yesterday was 75 degrees and sunny. Not a cloud in the sky! We couldn’t have asked for a better day to ride. Before I started, I applied sunscreen liberally. I still got a bit of color though. 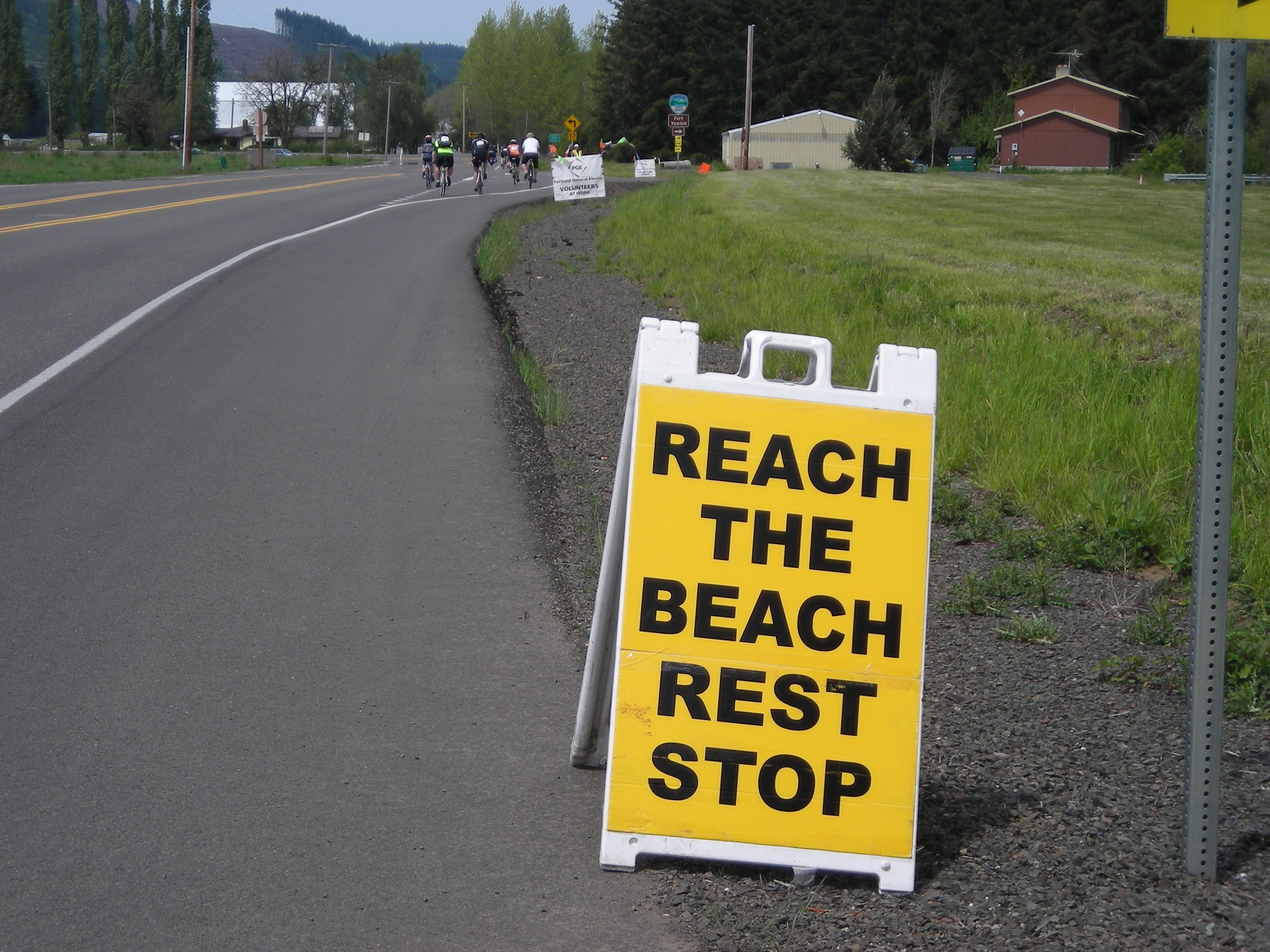 After another rest stop, I went over some Railroad Tracks and my camera bounced out of my bag and fell! We were on the road in some random town and a truck was driving by me. I almost fell off my bike when I stopped but I didn’t–I caught myself. My camera broke a little when it fell on the pavement and the truck ALMOST shattered the camera. 🙁 Luckily that didn’t happen. Michael grabbed the camera and the semi-crushed batteries and I tested it to see if it would still work. It did. We continued on.

I didn’t feel hungry at all during the ride and my energy level was pretty high. I wasn’t sure I “needed” the GUs but I wanted to take them to maintain the high energy I had. So I ate them to prevent any future energy crashes and it worked.

During the entire ride, I saw a lot of people on the side of the road fixing flat tires. YIKES. For the first 15 miles or so, I thought for sure my back tire was flat and I was pretty worried. Of course it was just my own paranoia getting the better of me (after last weekend’s debacle). I never got a flat. Good! This part of the ride was quite hilly.

We got to the top of a particularly long hill and decided to rest and have some GU. I’d been eating the GUs about every hour and it really helped a lot. All the rest stops had energy powder and water so I was also drinking that. There were occasional cars, vans, and motorcycles with “Event Support” signs on them that would drive the route. They made sure everyone was okay and helped people if they needed assistance. I saw some people had fallen or crashed and needed first aid but nothing too serious. There were also Event Support riding with the rest of us. At the top of this hill, one of them rode by and asked if we were okay. I gave him the thumbs up sign and he said, “See you at the Beach!” as he went on. 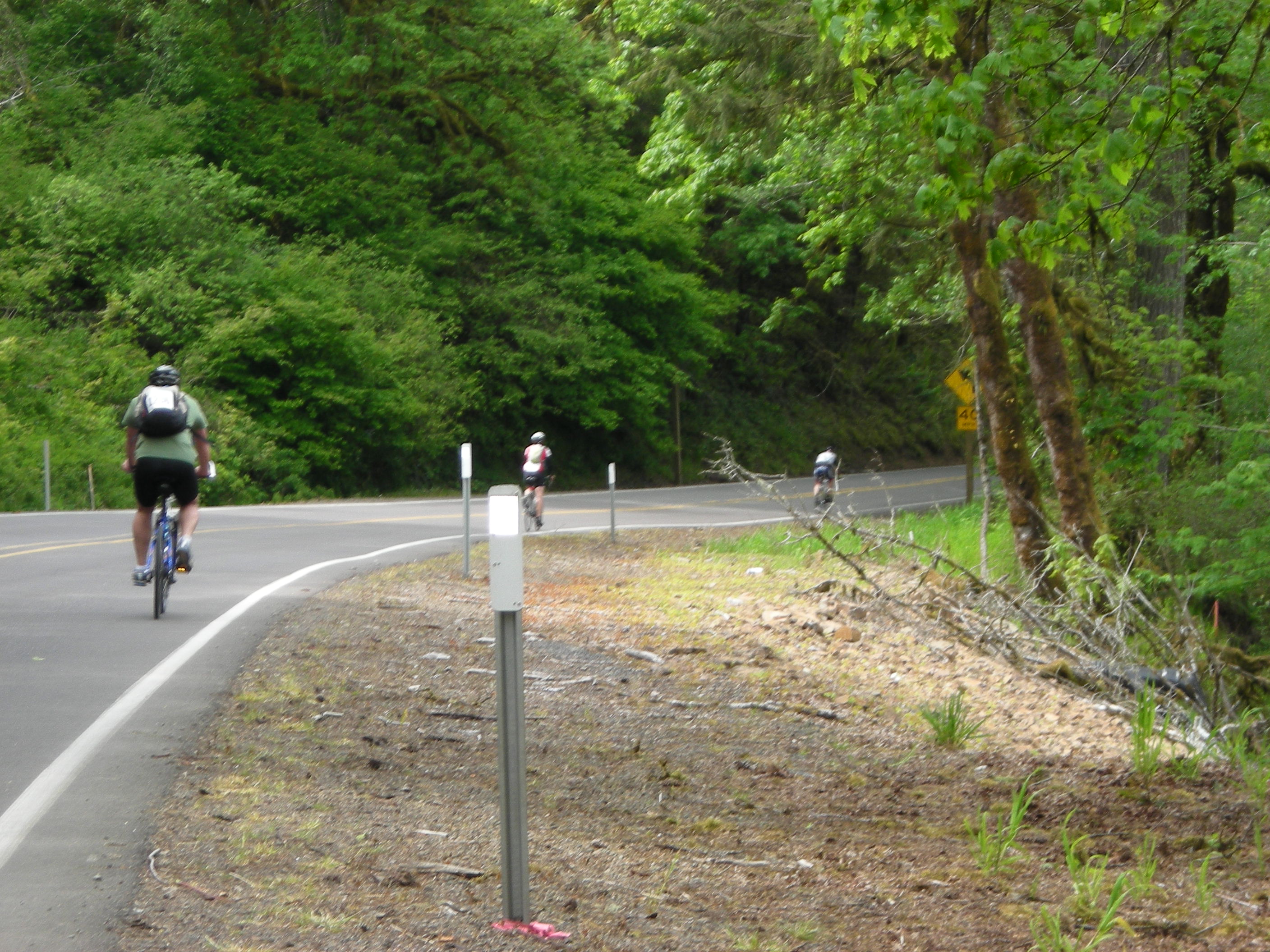 One thing I didn’t account for was the temperature drop the closer we got to the beach. Like I said earlier, it was sunny, hot, and 75 degrees. Well, there’s some steep elevation before the beach and it’s all old growth forest in the Suislaw Forest. That means it’s shaded, cold, and windy. 🙁

I was in short sleeves and I was starting to get goosebumps. We stopped at the last Rest Stop before the beach and I was pretty cold at this point. 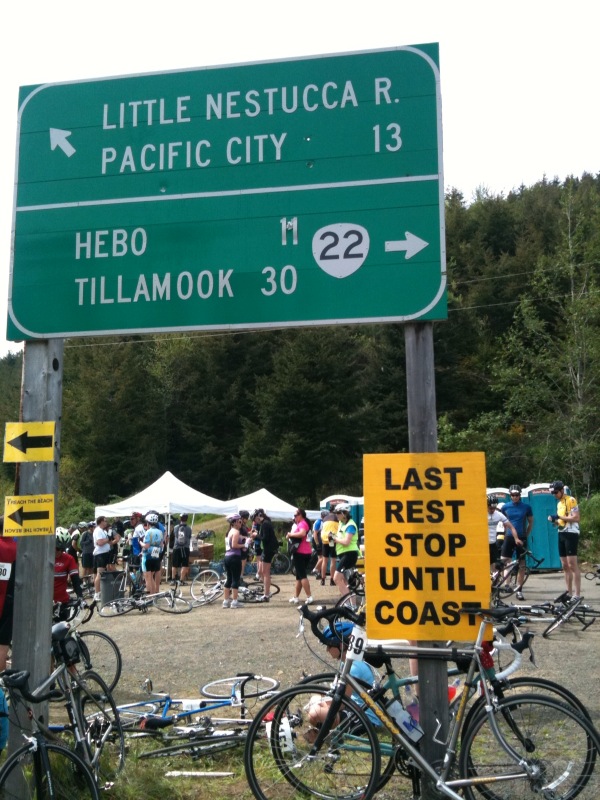 Michael said he overheard some other riders talking about some insane hill coming up. I didn’t really pay much attention to it. I was in the zone all day and I felt confident in my abilities. We headed out. I was too cold to stand around for very long. My toes and fingers were going a little numb. We rode down the hill a bit and rode along the river some more. Then we were riding through more countryside. Lots of farms, old barns, fields full of cows (and their aromas) and horses.

There are no pictures for the next few miles and you’ll understand why in a bit.

So we’re pedaling along, feeling really good. It’s mostly downhill. Then we turn a corner and I see the hill.

OH MY GOD. I groaned loudly and said “What the HELL?” Seriously. The hill was short but it was STRAIGHT UP. The bike teams that had passed us at the speed of light were ALL STANDING UP ON THEIR BIKES and barely moving. No one was sitting in their seats for this hill. I thought to myself, that’s okay, I can do this. I can do this. I am MAKING IT UP THIS HILL ON THE BIKE. I shifted my gears and powered down. Michael left me in the dust. The whole way, I had been crushing the hills and going as fast as I could because I knew if I went slow, I’d never make it up. This time, Michael did the same. I was fairly close behind him. I realized immediately that this hill could kill me.

I pedaled as fast and as hard as I could.

My quads were burning but I was making it. I passed people struggling to make it up the hill. I kept breathing hard and just pedaling.

Then it got hard to pedal. I was struggling to even make a full rotation on my pedals. I decided to do what I dreaded the most: using the left gears. I hate using them because they aren’t smooth and my chain has fallen off as a result in the past. But I did it. And I made it up that KILLER hill. I made it to the top!!! I was so happy. I was smiling and feeling very proud of myself.

The hill at the top leveled out a bit and I pedaled slowly to recover. Then it went down hill. And this is where the trouble started. My chain locked up. I couldn’t shift. I couldn’t pedal. I couldn’t do anything. Michael was way ahead of me and already going down the other side of the Killer Hill. Another rider asked if I was okay and I said my chain locked up and I couldn’t shift. He said to coast down the hill and try shifting. I got to the bottom of the hill and pulled off to the side. My bike was EFFED. Sorry to swear but it was majorly screwed.

The chain was wound into itself on something. I started to panic. Michael was no where to be seen. No other riders were stopping. I tried to see if I could lift the chain and force it back onto the gears. Nope. I started to cry a little bit. I was so close! There was literally 10 miles left! I couldn’t believe this.

I flagged down another rider and he pulled over. He was an older gentleman named Russell and he saved me! He did his best to help. He said my chain was a goner. A few minutes of him trying to get it to work, and Michael showed up! He gave me a hug and tried to calm me down. Another guy stopped (he had a French accent) and I didn’t catch his name but he did something magical and got the chain back on the gears. He took off and Russell put my tire back on and wished me luck. At this point, a guy on a motorcycle with Event Support showed up to see if we were ok. Russell said my chain would sound awful and it would be hard to ride but it would get me to the finish. I thanked him profusely and Michael and I took off.

The chain sounded AWFUL. It was the worst thing I’ve ever heard. And guess what? I had no shifting. I could not shift at all.

I had to finish the rest of the 10 miles with only one gear.