In case you didn’t know, it’s that time of year again…Tour de France! Woo hoo! It’s like the Superbowl for cycling nerds (ahem, Michael). He got me interested in it a few years ago and while I scoffed at the idea of watching cycling on TV, I had to admit it was pretty compelling and sometimes frightening (remember last year’s horrific accident involving a car, a cyclist and barbed wire?).

Well this year there is a group of women riding the same route as Tour de France one day ahead of them–all 2,162 miles! There are two women on the team from Portland too! “I’d like to prove we can do it,” says Jennifer Cree, a dental hygienist from Portland. The women will ride the entire Tour de France—from the prologue in Liége to the famous finish on Paris’ Champs-Élysées!! 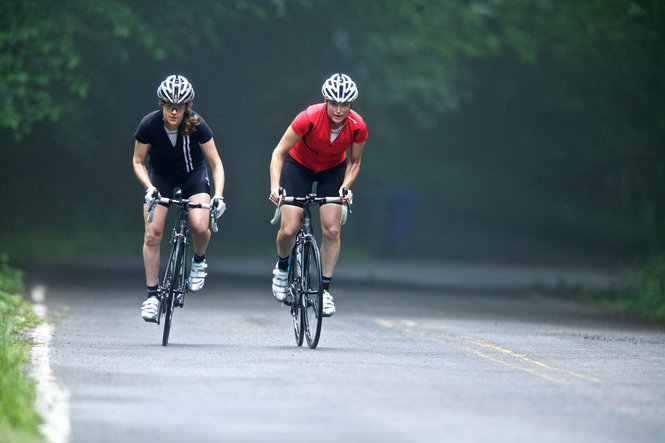 How amazing is that? I really want them to be successful. I think it’s incredibly empowering and inspiring. Unlike two years ago when I thought I was an Olympic athlete and was humbled beyond belief, I have no delusions that I could do something like the Tour de France. But it’s nice fantasize about it!

“The Rêve riders hope to inspire more women to ride and to raise money for the Bikes Belong Foundation. The goal is to bring in $60,000 for the Boulder, Colo.-based group that encourages people to ride bicycles, particularly women and children. Surveys show that women avoid bicycles because they don’t feel safe, so the Rêve money will help implement physically separated bike lanes in six cities — Portland, Chicago, Washington, D.C., San Francisco, Memphis and Austin, Texas.”

It’s for a good cause, too. Portland has a great infrastructure for cycling but there is still a lot to be desired. On my commute to and from work there are lots of areas on my route that are scary and unsafe–and do not have bike lanes.

I’ve been trying to research how long these women have been training and I’ve come up empty. Perhaps in future news articles they will say because I really want to know what kind of training they did.

“Every waking moment is about the ride, now. They’re doubling their workouts, wolfing down calories and battling doubts. “

Luckily they have sponsors and top-of-the line gear (check out that link for amazing photos). They will need it! Check out  Stage 16 (120 miles, 15,000 feet elevation gain, up and over the famed Tourmalet summit in the Pyrenees)!! I also loved seeing that Ninkasi beer is a sponsor. Too funny!

I love inspirational stories like this. I think it’s great that young girls can have athletes like this to look up to. How cool would it be if you and I could do something like that? Cycling doesn’t have to be the realm of men. In fact, I think woman have an advantage with having more lower body strength.

“It never gets easier, you just go faster.” ~ Greg LeMond.

Stuff like this inspires me. I think about it while I’m out there on the road riding my bike. It gives me focus for my own training and inspires me to keep going when it gets hard. I will be following their story and cheering them on. Will you?

QUESTION: Are you watching the Tour de France?