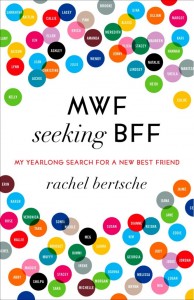 I recently read a really delightful book that I wanted to share with you guys. It’s not about dieting or fitness or weight loss, but I still wanted to share. MWF Seeking BFF: My Yearlong Search for a New Best Friend, by Rachel Berstche, was a book based on her blog recounting her year long search for a new best friend.

Rachel moved from New York City to Chicago with her new husband and even after several years of living there, was feeling like something was missing from her life. She craved female companionship and thus started this search for a new BFF. I could relate to Rachel so much in many different ways. First, I loved her writing style and her sense of humor. There were so many parts of the book where I was thinking I TOTALLY feel the same way!!!  Second, she watches the same TV shows I watch, she’s kind of a wallflower, and was really uncomfortable with stepping out of her comfort zone. All ME!

Her yearlong search for a best friend was comical, uncomfortable, sometimes exhausting reading all of the social activities she did to reach her goal of meeting 52 new people, and inspiring. It made me think about my own friend history.

“I think the waiters and hostess are beginning to recognize me. They must either think I’m the most popular girl in Chicago or a lesbian seriously looking for The One. Either option is far less embarrassing than the truth: ‘I’m here auditioning best friends forever!”

Most of my oldest, dearest friends were really based on convenience of youth. My best friend Rachel was the daughter of my boss at my first “real” job. I think I was 15 at the time and we became instant best friends. Passing the time at work chit-chatting lead to hanging out outside of work and the rest is history. I still consider her my best friend, even though she lives in Seattle and I’m in Portland. 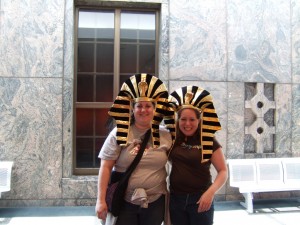 A few of my other friends are people I met in my early and mid-twenties at work. I think that’s the norm. You meet people at school or work and it’s so much easier when you’re younger. You have a common bond and that forges familiarity that can evolve into a real friendship. I also think it’s easier when you’re young and single. In my 20’s I had no problem going out for happy hour at the last minute because I didn’t have any other responsibilities (enter bff Erika). Of course now that I’m older, my schedule is booked with the boyfriend, gym time, house chores…the list goes on and on and I can’t even imagine how much harder it will be with kids!

“But on a Sunday morning when I want to grab an omelet over girl talk, I’m at a loss. My Chicago friends are the let’s-get-dinner-on-the-books-a-month-in-advance type. We email, trading dates until we find an open calendar slot amidst our tight schedules of workout classes, volunteer obligations (no false pretenses here, the volunteers are my friends, not me, sadly), work events, concert tickets and other dinners scheduled with other girls. I’m looking for someone to invite to watch The Biggest Loser with me at the last minute or to text “pedicure in half an hour?” on a Saturday morning. To me, that’s what BFFs are.”

I could relate to that quote so much! That’s me. Busy, scheduled, no down time. Most of my friends are the same way and we often go back and forth in a few emails in order to put plans on the books. It’s frustrating for sure. I only have a few friends who are “last minute plans” kind of people. Sadly, I think I often decline those last minute offers because of previous engagements.

When I was living alone in Portland, 22 years old and single, I decided like the author that I needed to make new friends in my new city. It was time. I’d lived in Portland for 2 years with a boyfriend before I moved back to Seattle temporarily at 21. While we lived together, I didn’t have a lot of “me” friends. I had couple friends that we’d hang out with, or became friends with some of his friends. That simply did not work after the breakup. Thank goodness the internet was there! That is how I made a lot more friends.

I joined Yahoo Groups for every topic I was interested in, from writing to history to dancing. I made new friends (one was Robyn, another person I consider a best friend and still hang out with a lot) and met a ton of new people.  Some of those fizzled out over the years, some stuck around. I met a lot of duds–there was a girl recently divorced and I felt like every time we hung out we were both trying to force the friendship. In the end we just didn’t have a lot in common. Another one was a guy that I met who was also a writer. I was 22 and naive and too trusting, and invited him to my apartment one afternoon to swap our writing and critique it for each other. Thank goodness he was just a weirdo and not a psycho. Needless to say, we didn’t click either and I never spoke or saw him again.

“Popular culture has made it okay to yell “I want a man!” from the rooftops, so why are we still embarrassed to say, “I want a best friend”?”

It can definitely be frustrating. There are dating sites, there’s places you can look for jobs online, but trying to find just FRIENDS can sometimes be so much harder!

The author described several people in her book which she called “friend connectors.” These are the people in our lives who KNOW EVERYONE and seem to be at ease with interacting, meeting new people and not feeling awkward or shy. These are the people who say “You would love my friend _____!” and then introduce you. I think those people are cool. I need to know more of those people. 🙂

I made several friends over the last few years through my blog and Twitter. I am really happy that that happened. One friend, Carbzilla, I would most definitely consider a real life friend and now her and her husband are “couple” friends that Michael and I try and see whenever we’re in the same town together! I think it’s so awesome that the internet can bring people together like that. And not only that, she introduced us to some of her friends who live in Portland and I’d love to spend more time with them and create a friendship there, too. Connector!

“‘It takes a lot of work,’ I say. ‘You’ve got to say yes to all the invitations that come your way.  The more you say yes, the more invites you’ll get. You have to follow-up with all those meetings where you say ‘We should totally get together!’ instead of just saying it to sound nice. And signing up for things helps. Oh, and asking for setups. You know, basically all the things you do when you’re dating.’”

After reading this book it inspired me to open up my own network. I’d love to meet new people. And I started thinking about my own habits…am I the type of person to stop and chit chat with people? Not really. When I’m at work I’m not a chatter. I get super focused and get tunnel vision. I’m not unfriendly, but I definitely don’t stop to smell the roses. I’m too scheduled, too focused. I NEED to take the time to invest more in relationships. You never know when you might meet someone really special who you’d otherwise miss out on if you don’t take the time.

So how does one essentially change who they are? The author definitely stepped out of her comfort zone and it paid off for her. She met a ton of people, not everyone turned out to be a BFF but she tried new things she’d never do on her own and met new people who enriched her life. Can I do the same? Step out of my comfort zone? Change the structure and routine and be more carefree and spontaneous? I have no idea. It won’t hurt to try!

Lastly, the book was a fast read and I enjoyed it. There were parts that were a bit tedious and sometimes it was really hard to keep all the people straight but all in all I’m glad I read it.

QUESTION: How did you meet your best friends? Have you tried making new friends recently?