This is the Hawaii post about fitness! What a wonderful place to take your exercise outside. While the condo we were staying in had a gym and a pool I could use, I only used the facilities about twice because it was just too nice outside to be stuck on an elliptical everyday.

My first run in Kona was the first day we were there. I woke up early (time change messed me up for about a day) and went for a run to explore the area. I didn’t spend much time out there because we had plans as a group for the day and I wasn’t sure when everyone would be up and about. It was a good start to the vacation.

A few days later I went for a REAL run. I ran down to the road along the beach and explored the area. I checked out all the really nice beachside hotels, I ran through the tourist shopping area and all the way down to the docks where the canoes and boats set off. It was also the area where the boats ferried in people from cruise ships stopping in Kona. 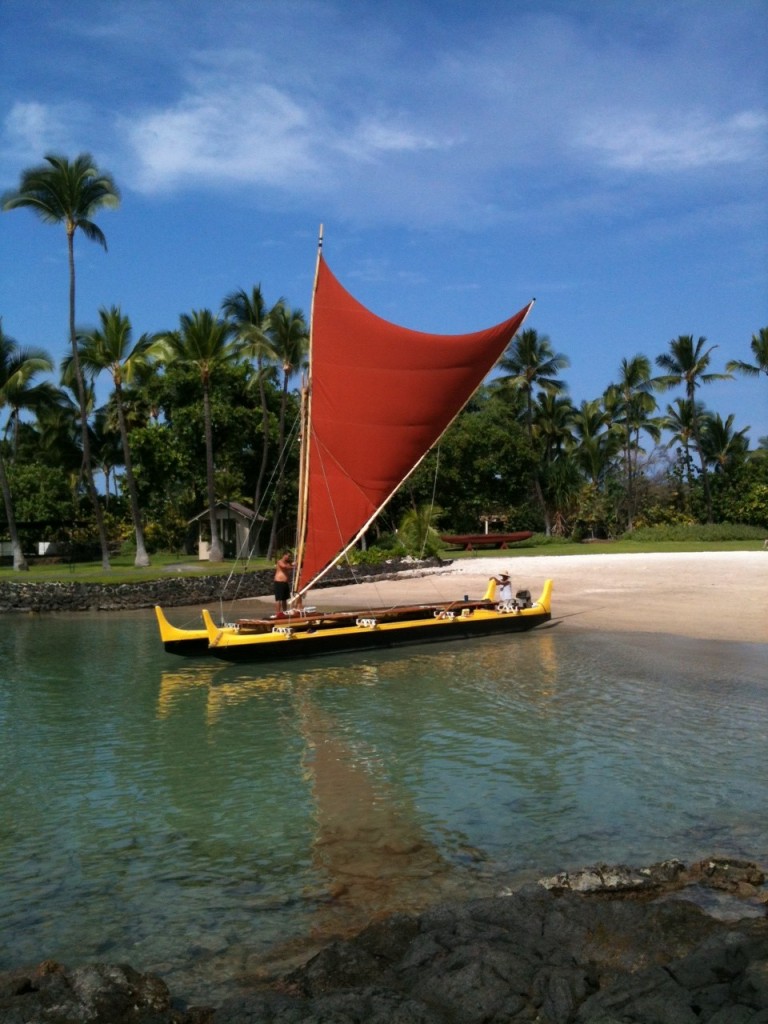 My body felt good during my entire run. It made me wonder if the aches and pains I often feel running at home have to do with colder, damper weather? Who knows. All I know is that I felt like I was flying when I ran in Kona! 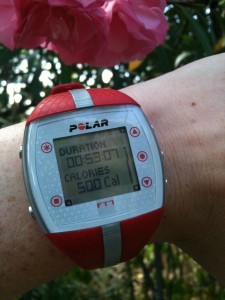 My last run of the vacation was awesome but kind of sad. The reality of leaving paradise hit me as I ran down to Alii Drive along the ocean. I couldn’t see myself living in Hawaii, but it was so magical visiting there. Each and every run or swim reminded me just how much I wished I lived somewhere with consistently decent weather. It really is sad spending all my time cooped up in the gym when I could be running next to this: 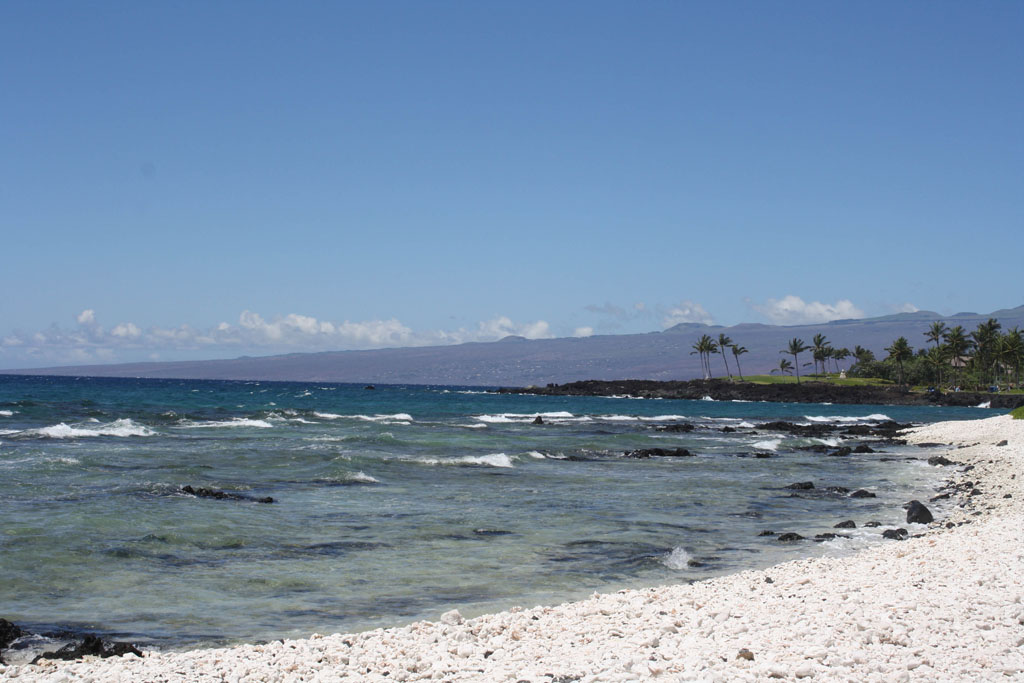 This was my favorite run because of how great I felt, how far I ran, and how I was able to end the trip with some happy running memories. 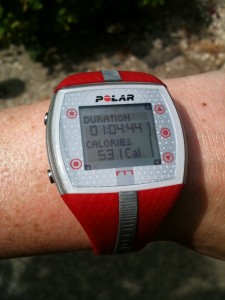 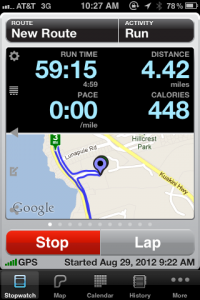 I never wore my heart rate monitor when I swam in the ocean. I have no idea how many calories I burned, but I didn’t really consider it exercise: swimming in the ocean was playtime for me! I always thought it would be scary or hard to swim in the ocean but it really wasn’t. It was pleasant. The water was warmer than a hot bath at the end of a long day. The waves were fun and made me want to learn how to surf. The salt water also did wonders for my skin. Here are a few photos and tales from my ocean swimming adventures:

This turned out to be the winning spot for the whole trip and we ended up going back about 3 times. It was secluded and quiet with a perfectly soft, white sandy beach, some shade from the hot sun and hot ocean waves. 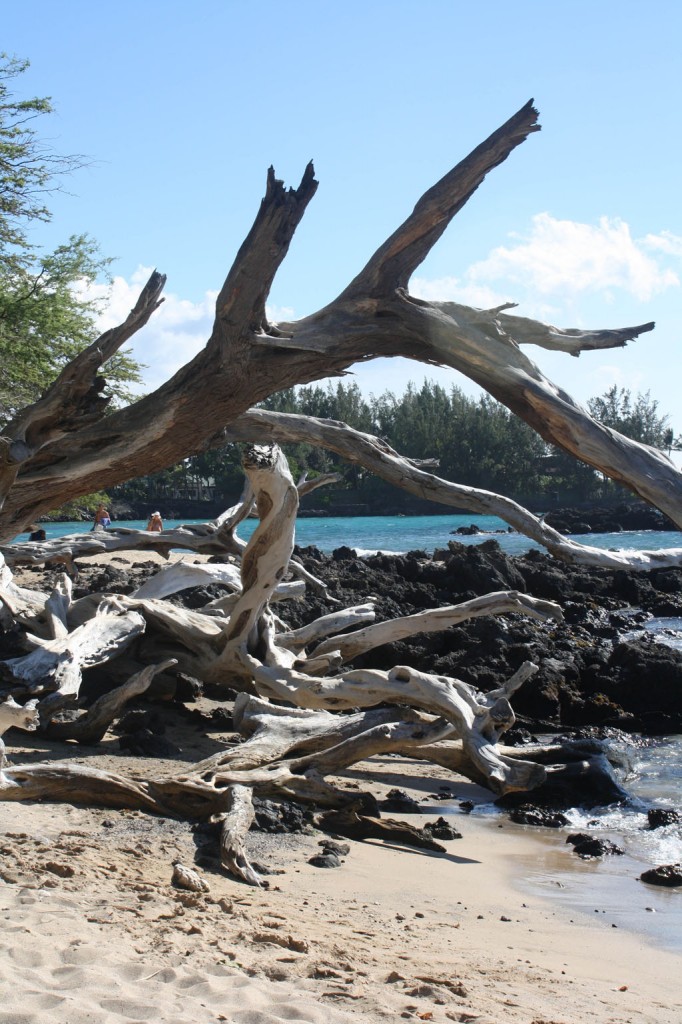 Before this trip, I’ve never been swimming in the ocean. People think that’s strange but growing up in Washington and Oregon doesn’t lend itself to that. The water and beaches here are freezing. Swimming in the warm ocean turned out to be the thing I loved most about Hawaii. 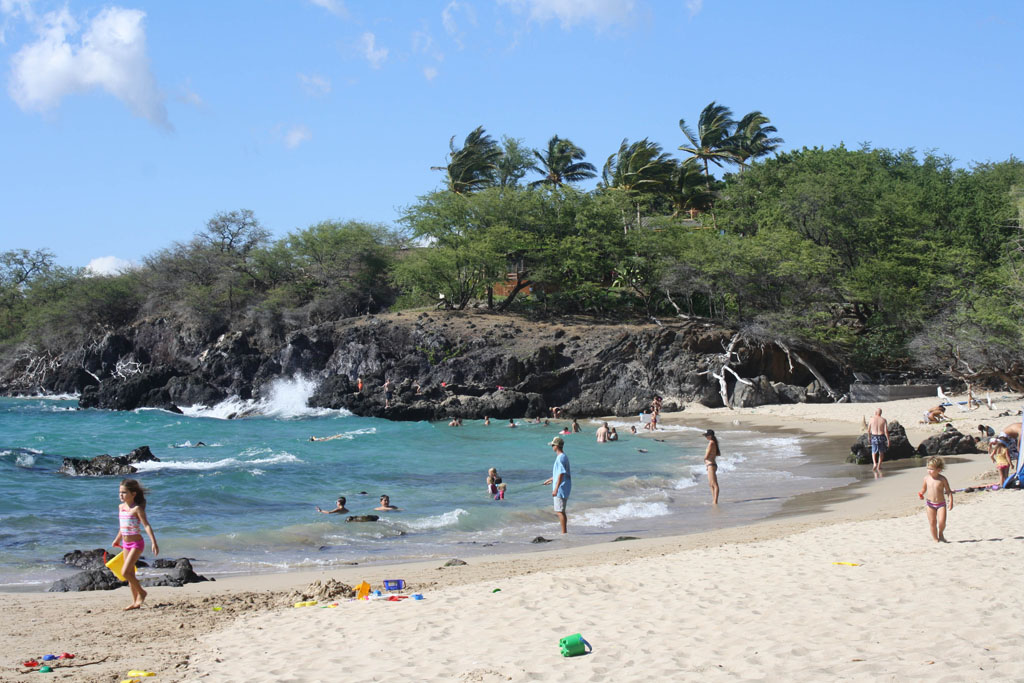 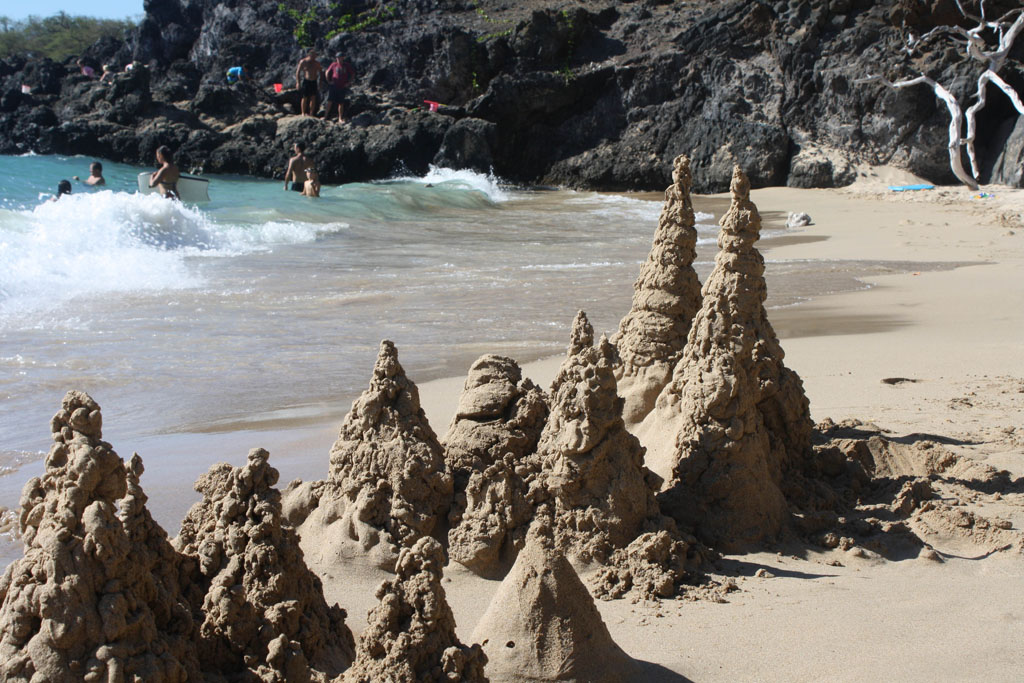 There was no fear of swimming in the open water, just happiness! Every beach we went to on the trip, I ended up swimming “laps” in the ocean. It felt wonderful and made me so happy.

This beach wasn’t super great as far as “white sandy beach” goes, but it was by far the best place for snorkeling on our trip. Kahalu’u Beach was fairly close to the downtown shopping area and our condo. The water was warm and there were so many beautiful fish to see. 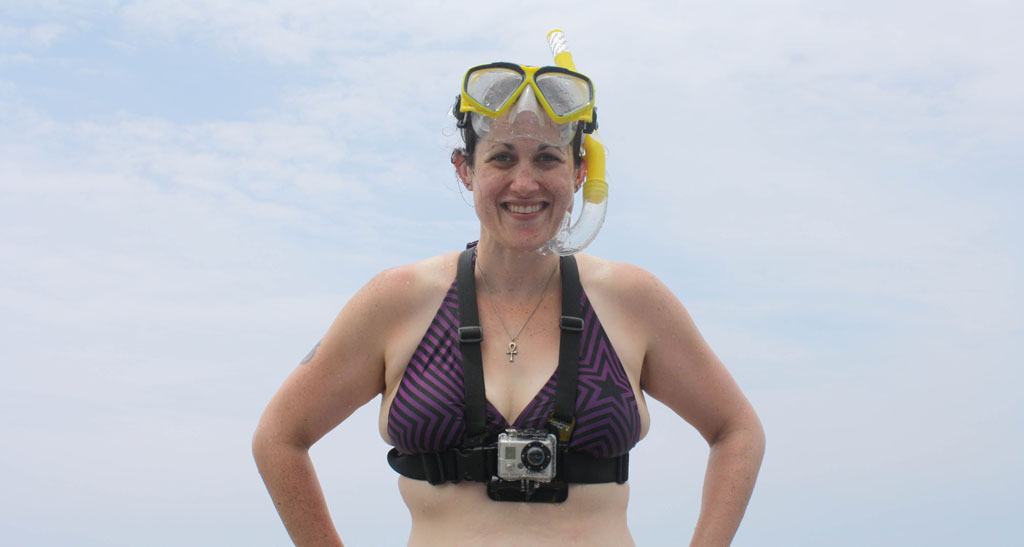 I also got to swim with the Green Hawaiian Sea Turtles! That was truly amazing. They were humongous, beautiful creatures and they were floating under water, eating the green algae off the rocks. I floated along side them and watched them eat. 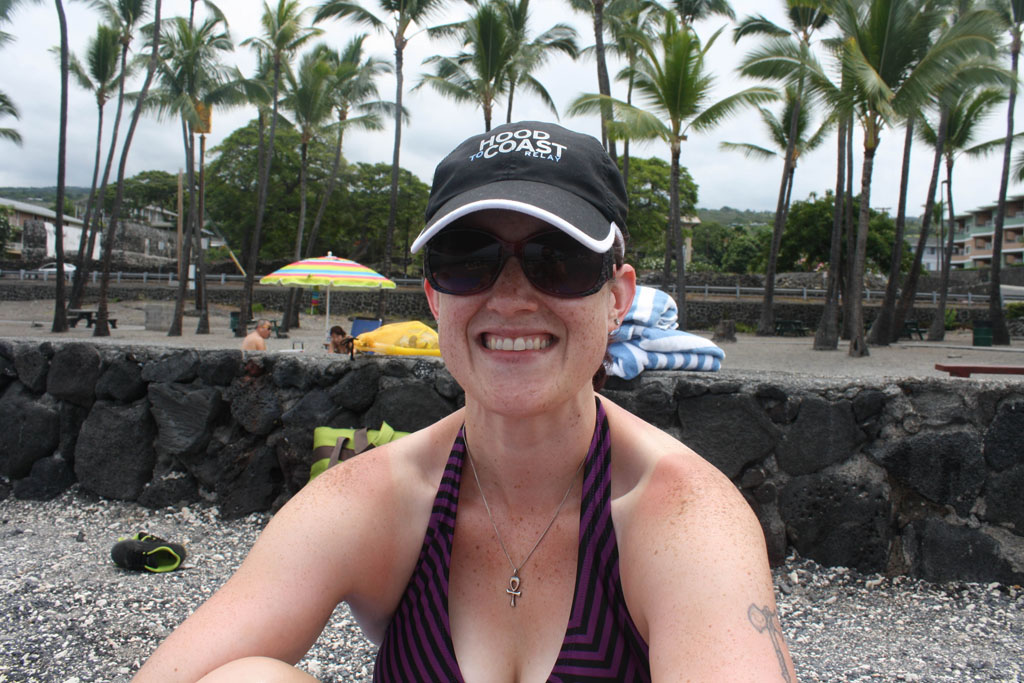 A tiny green gecko also joined our little picnic on the beach. He jumped from from our blanket to our friend’s leg and then jumped onto my leg! He was pretty cute! 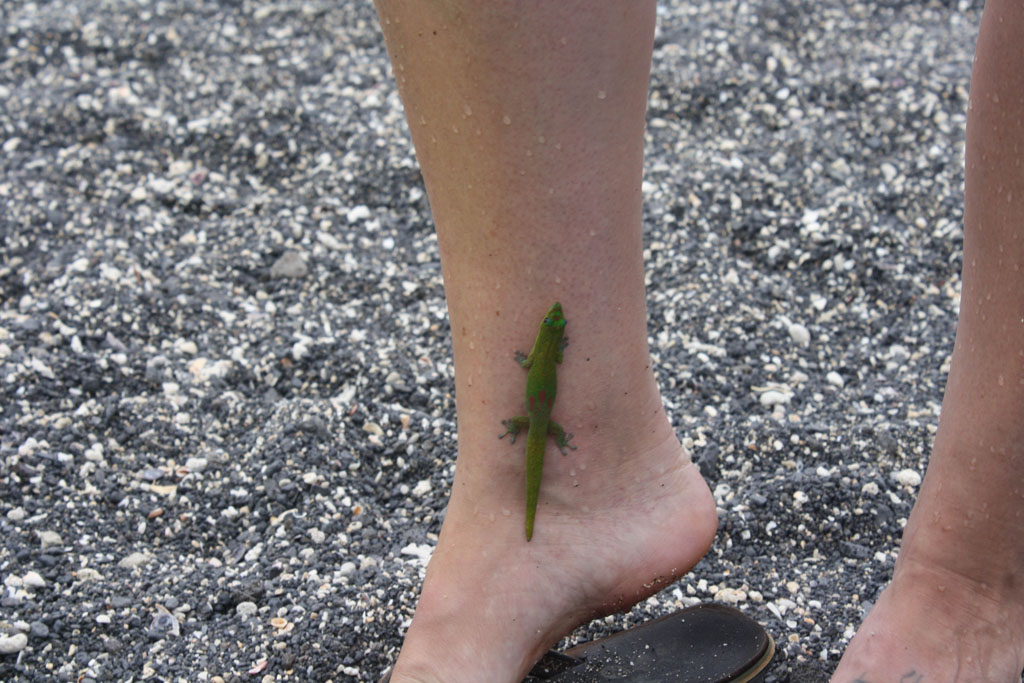 I would have gone back to this beach again simply for the snorkeling with turtles.

This beach was postcard perfect. The small shoreline was stark white with hot, tiny sand and bright aquamarine waves and palm trees almost shading the beachcombers. 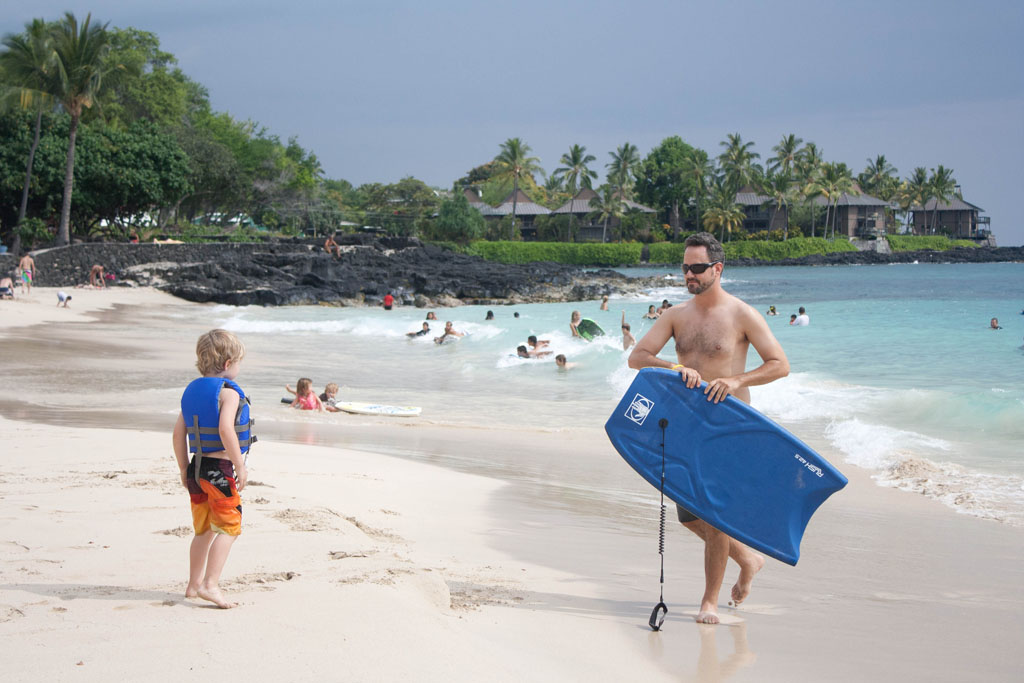 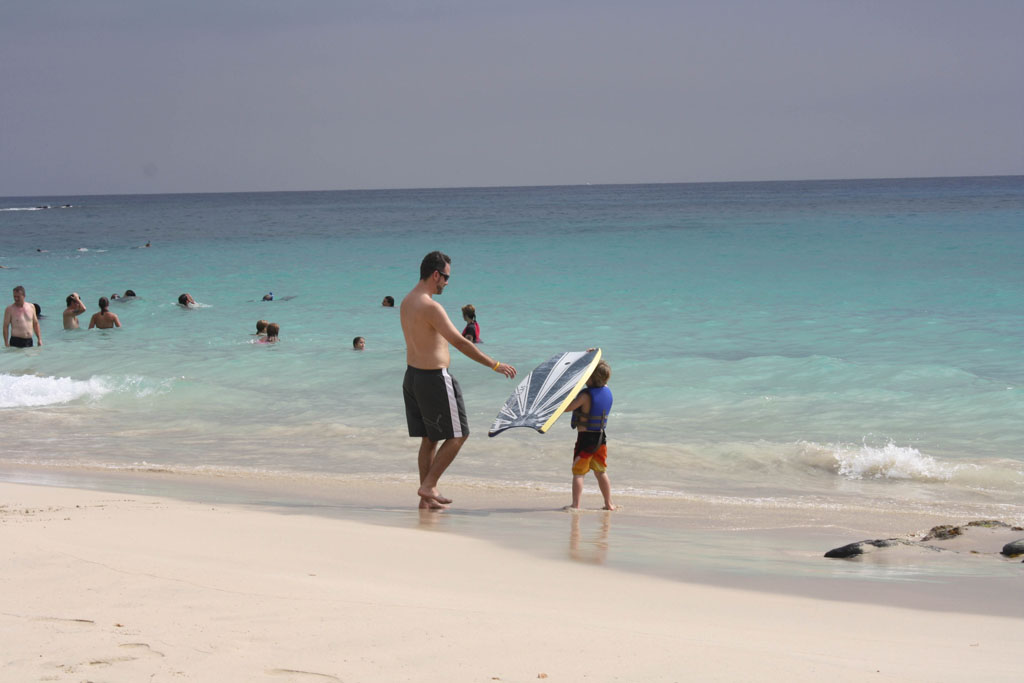 The beach was a popular one but not great for swimming or snorkeling because the waves were humongous and the tide was really strong. It was more of a “lay on the beach and then jump around in the waves to cool off” kind of a place. 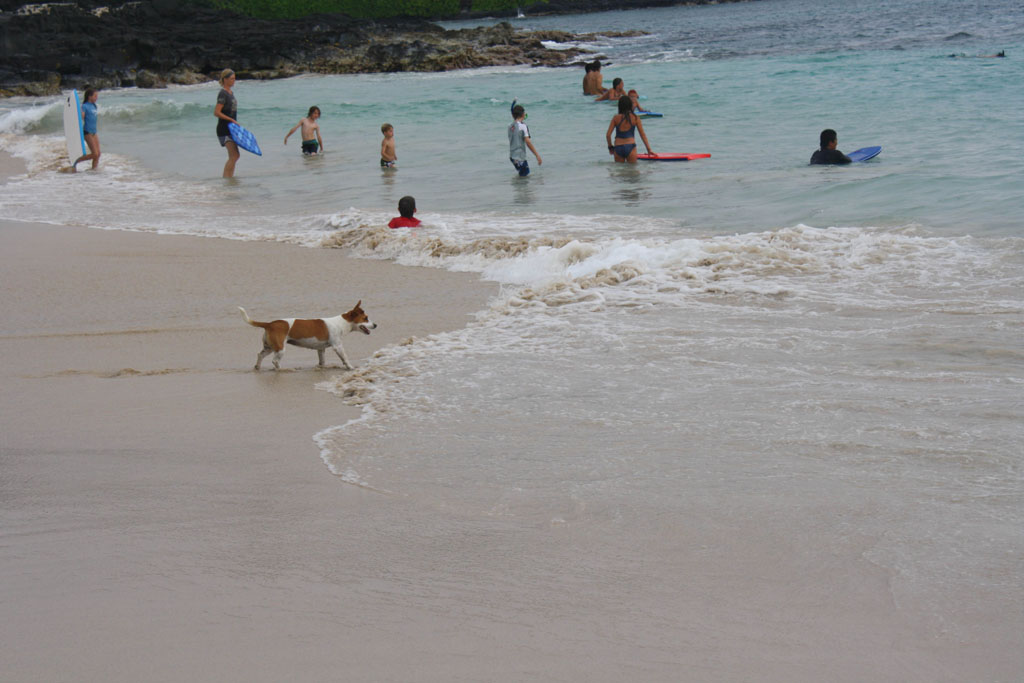 It was also rocky along the water in places, mostly in the water where you couldn’t see it…which lead to some injuries. I cut the bottom of my foot on a rock and had no idea it was cut until later. Our friend Mike also cut his foot but it was a huge gash that did not look good. The little one scraped the side of his foot but luckily didn’t seem as bothered by it. 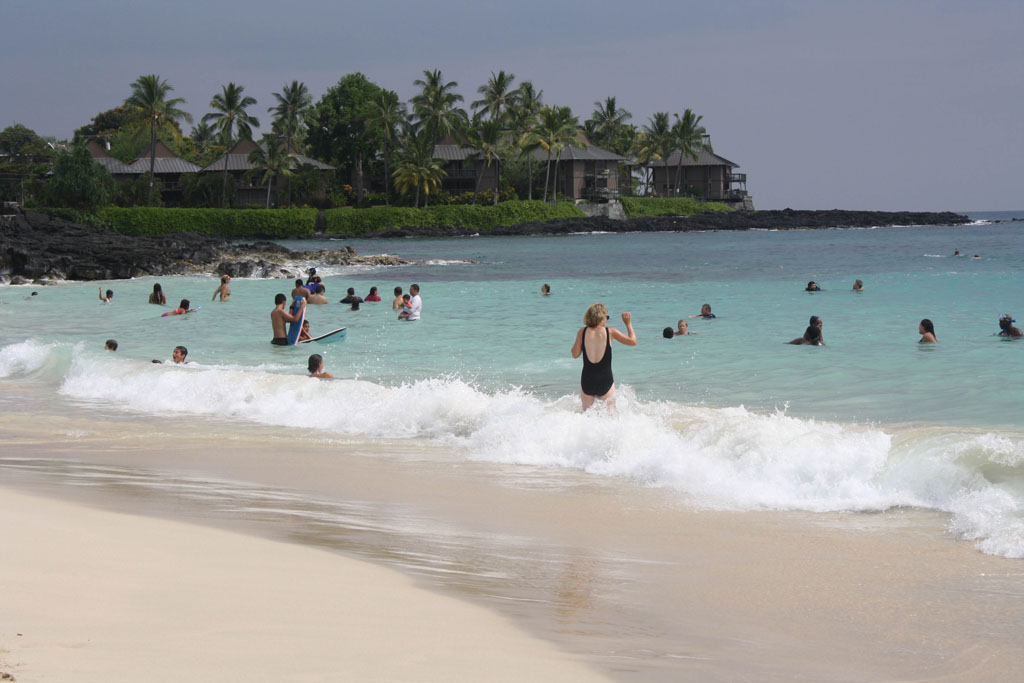 Despite the war wounds, we all liked spending the afternoon at this beach.

This beach ended up being our back-up plan. We tried to go to Mau’umau beach but it was hard to get to with a 4 year old and a pregnant woman (rough, rocky trail down to the beach) so we ended up at Mauna Kea. It was a fantastic beach. The fancy Mauna Kea resort and golf course were right on the beach and there was a “guest only” section complete with lounge chairs and cabanas, and then the public side of the beach. 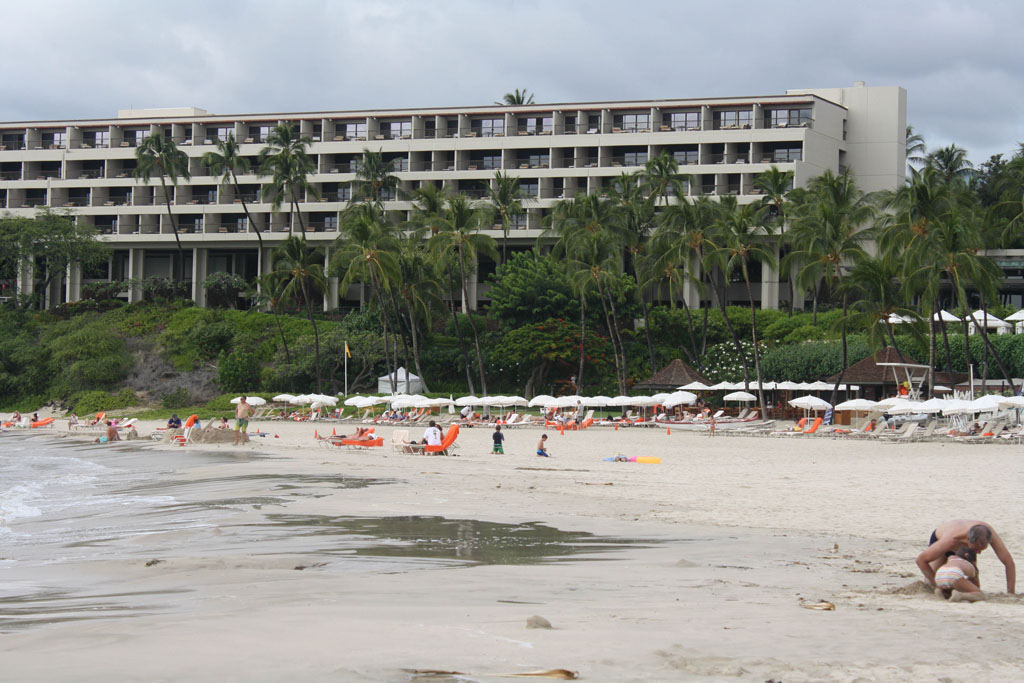 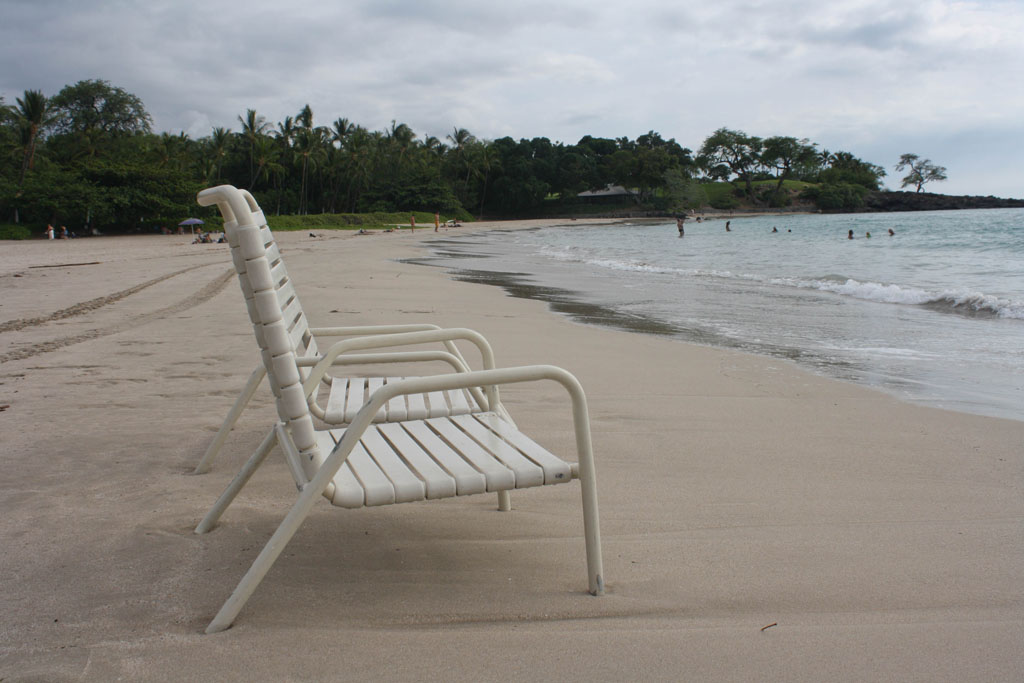 It was a bit of a walk from the parking lot down to the beach but the facilities were all really nice and the soft sand and big waves made it worth it. 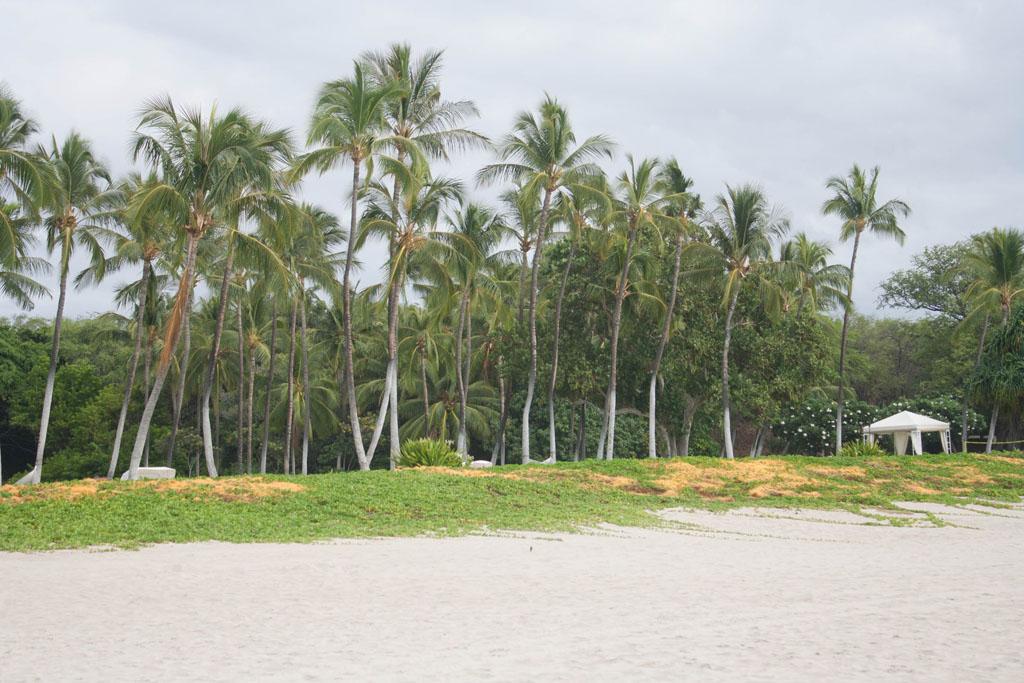 I did a bit of snorkeling here but there weren’t that many fish in the area we were at. I gave up the snorkeling and went to swimming laps in the ocean. It was a lovely swim followed by snoozing on the beach. 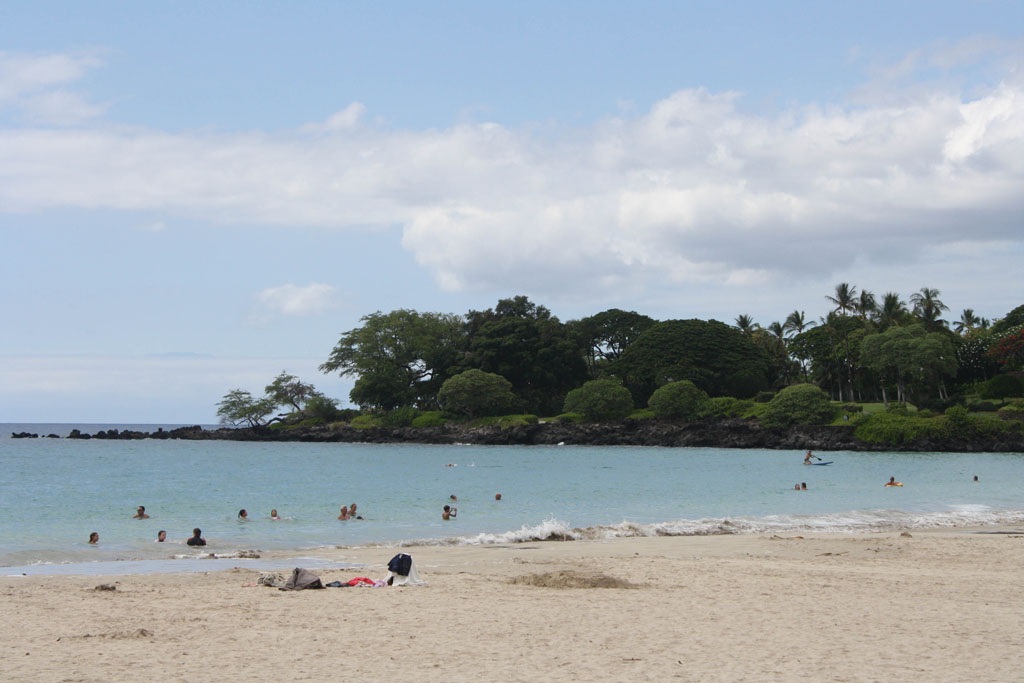 This ended up being our beach finale of the trip. It was a nice beach to end on, although I wanted to spend more time swimming in the ocean. That is definitely the part of the trip I miss the most. 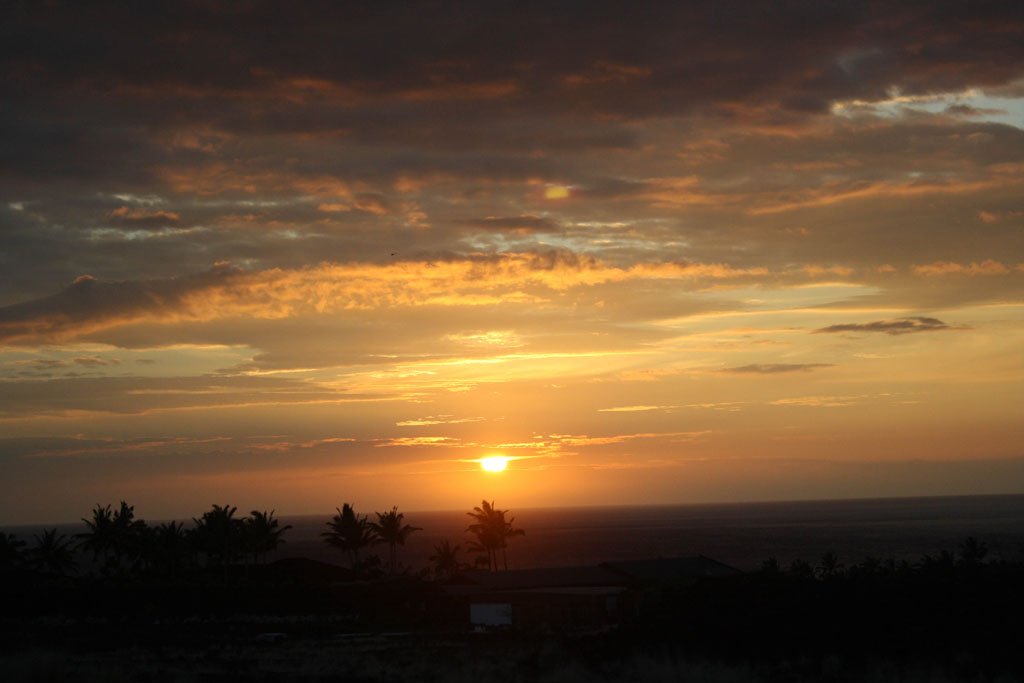 The last morning of our vacation, I woke up extra early so I had time to swim in the pool at the condo before packing and leaving. I was the only one in the pool that early and the sun had just come up maybe an hour before. It was warm but the cool part of the day and I enjoyed swimming outside in that pool. 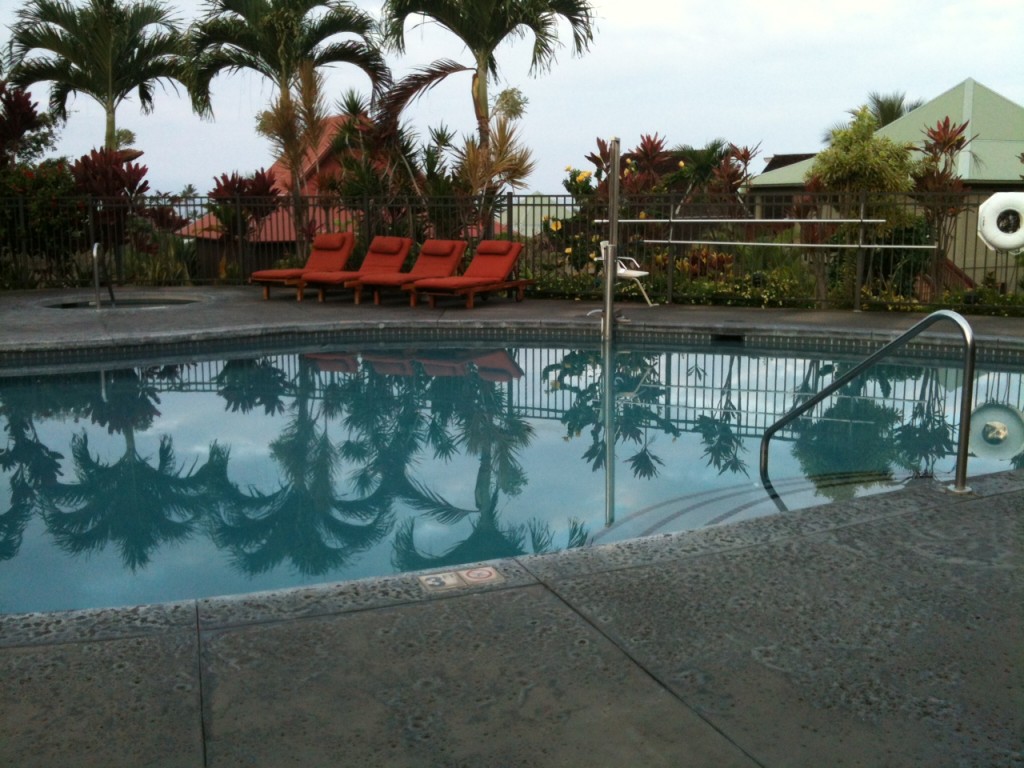 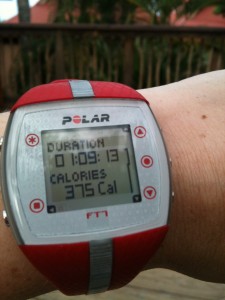 It was nothing compared to the ocean, but it was a nice way to end my trip. One thing ticked off my bucket list: swimming in the ocean. Fantastic.

QUESTION: Have you ever been swimming in the ocean?