Time for the REACH THE BEACH RECAP! This will be done in several parts because the story is long and exciting and I have many, many photos I want to share with all of you! 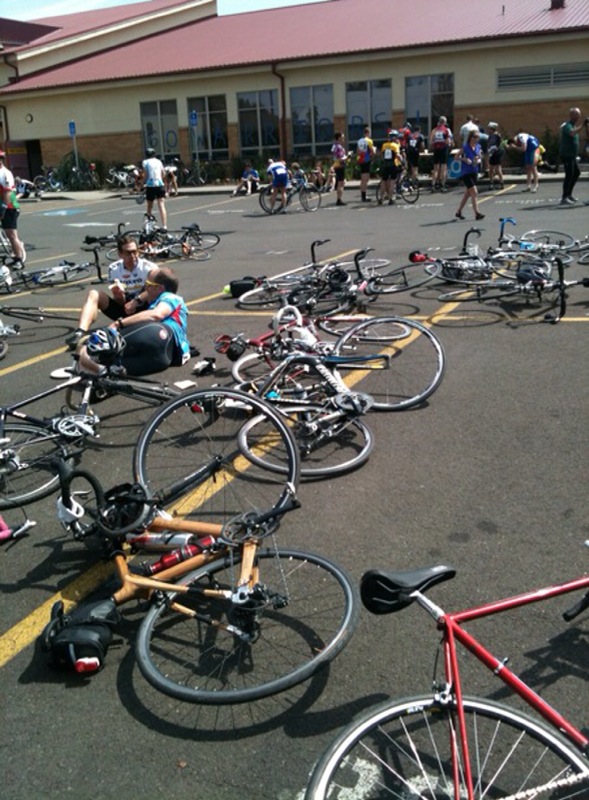 My friend Star was kind enough to help us out yesterday. She came over bright and early and the three of us headed to Newberg to drop off Michael at his start. Last week he had decided not to do the full 100 miles and instead, start in Newberg and do 80. I think that was the right decision. The hills in the first 20 miles of the ride were insane. We arrived at the Newberg Start and Michael got set up. The place was pretty crowded already.

Michael stretched and used the bathroom. There was a pretty long line. 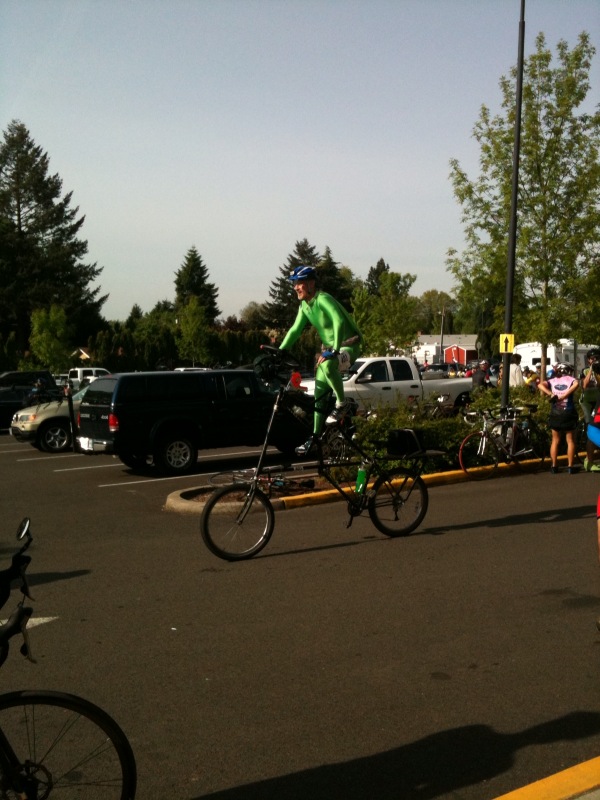 We both had our stash of GUs in our bike cases. I tried to calculate how many I’d need for the day. I packed 6 for the ride.

There were lots of different kinds of people. Mostly serious cyclists, some weirdos like the guy above :), there were even uni-cyclists! But honestly there were all shapes and sizes of people participating. Never NOT do something because you’re 10, 20, 30+ pounds overweight. I saw that yesterday. Anyone can do something like this! 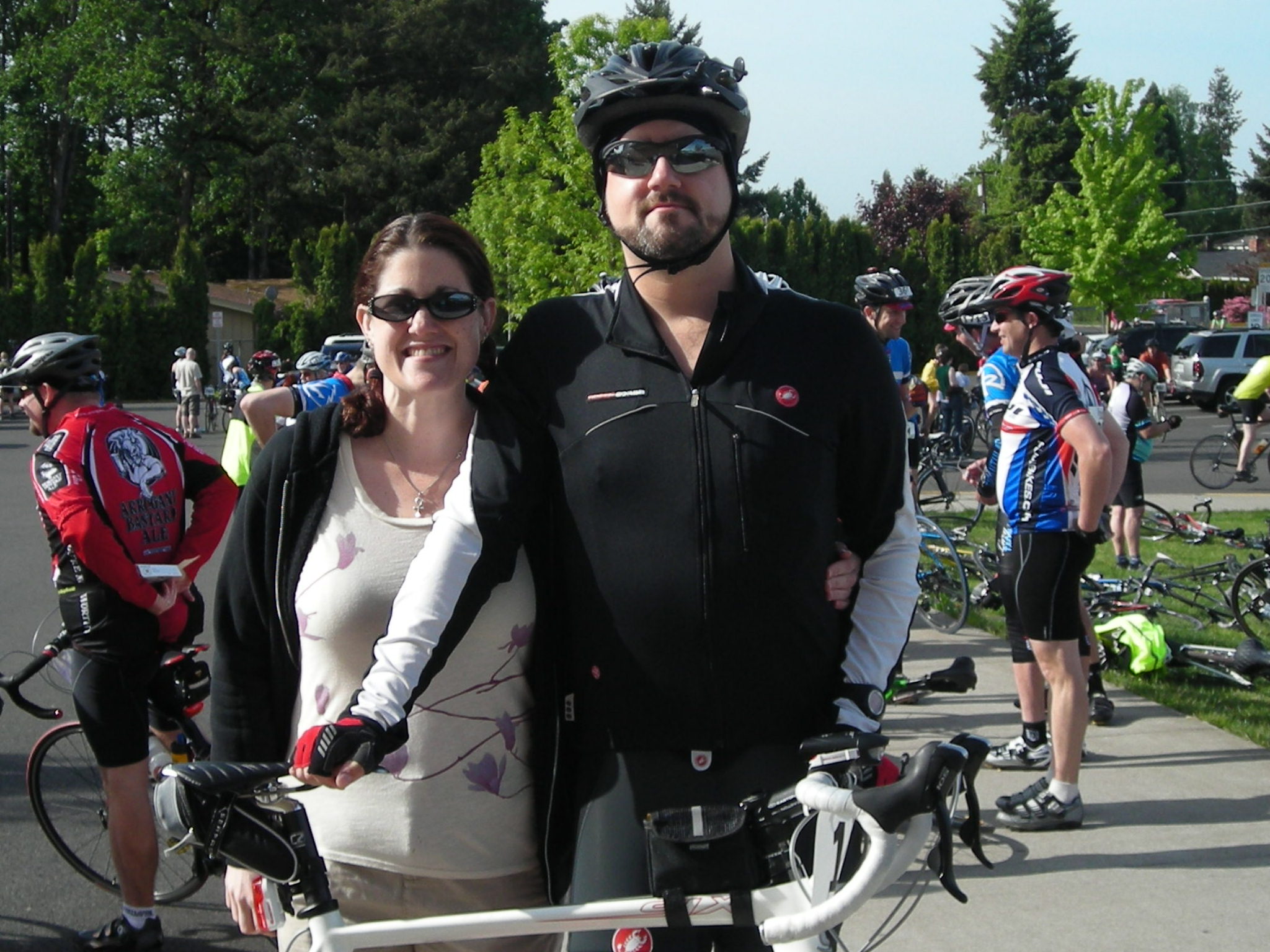 Michael took off to do his 30 miles to Amity where we would meet up later. Star and I left and drove to Salem to have breakfast.  I had scrambled eggs, sausage, an English muffin and kiwi.

We met up in Amity where Michael ate lunch before we got there. It was perfect timing too because the line for lunch was insanely long!

Getting ready to leave: 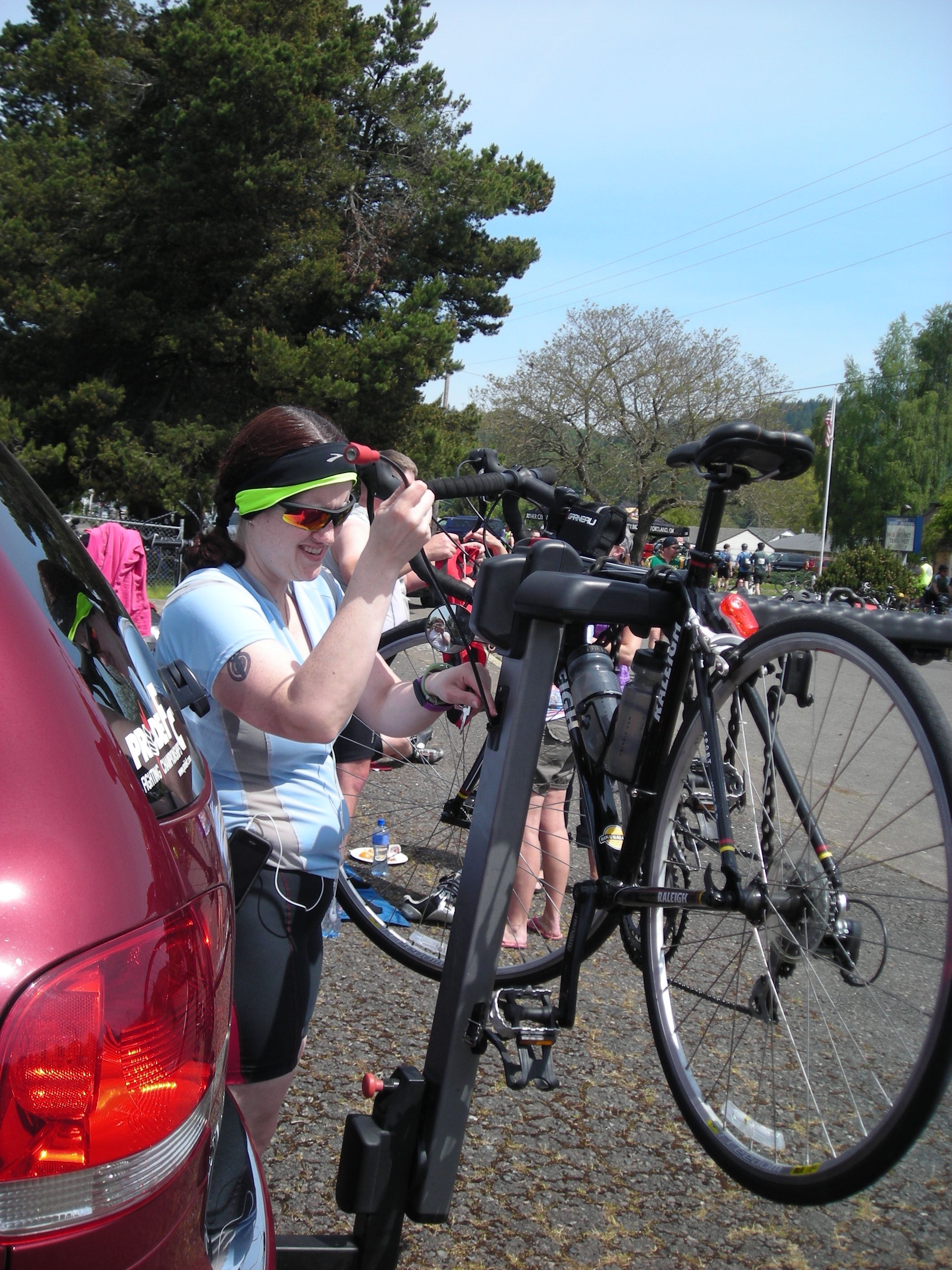 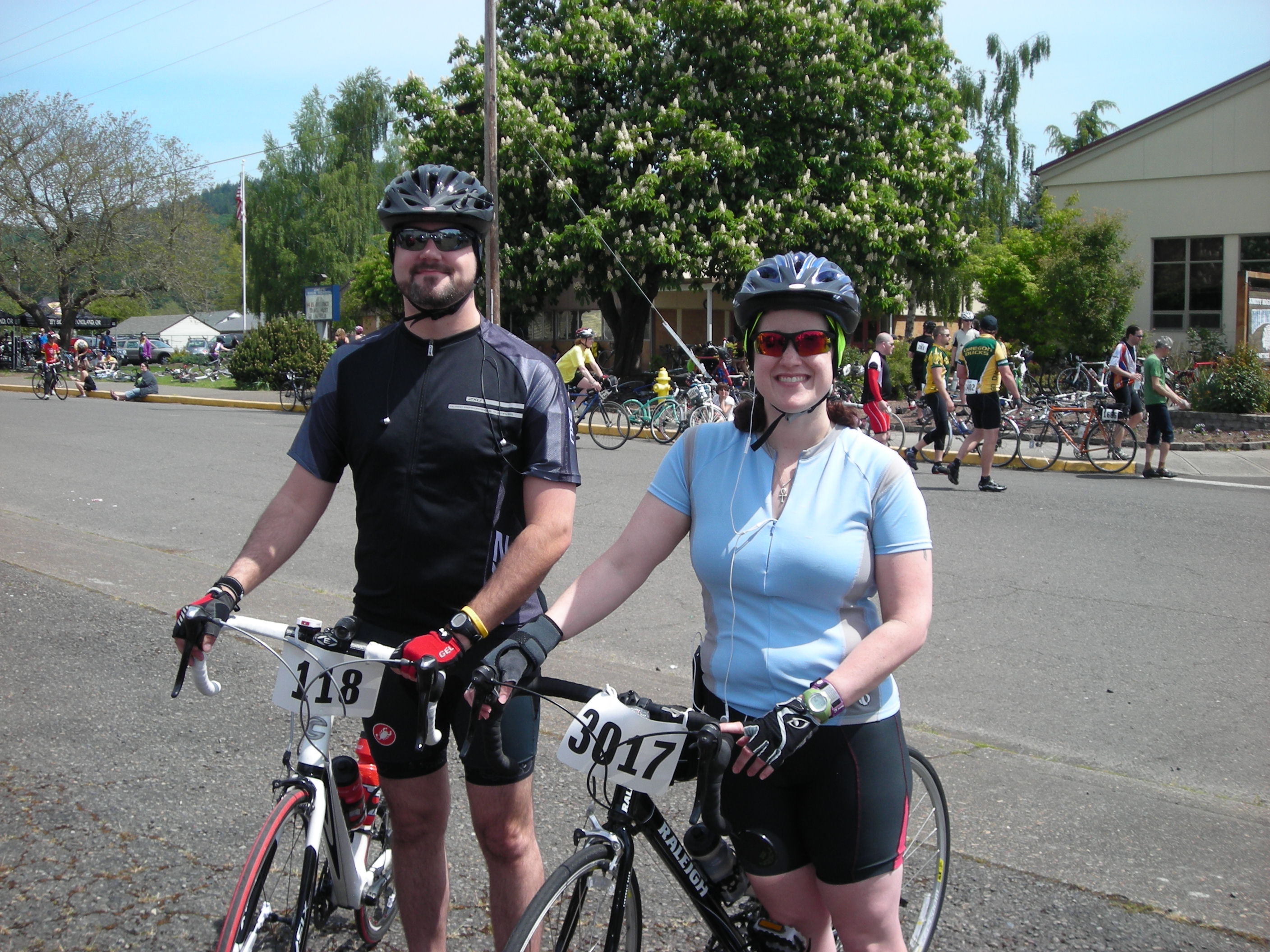 The route was very clearly marked the entire way, so that was really good. 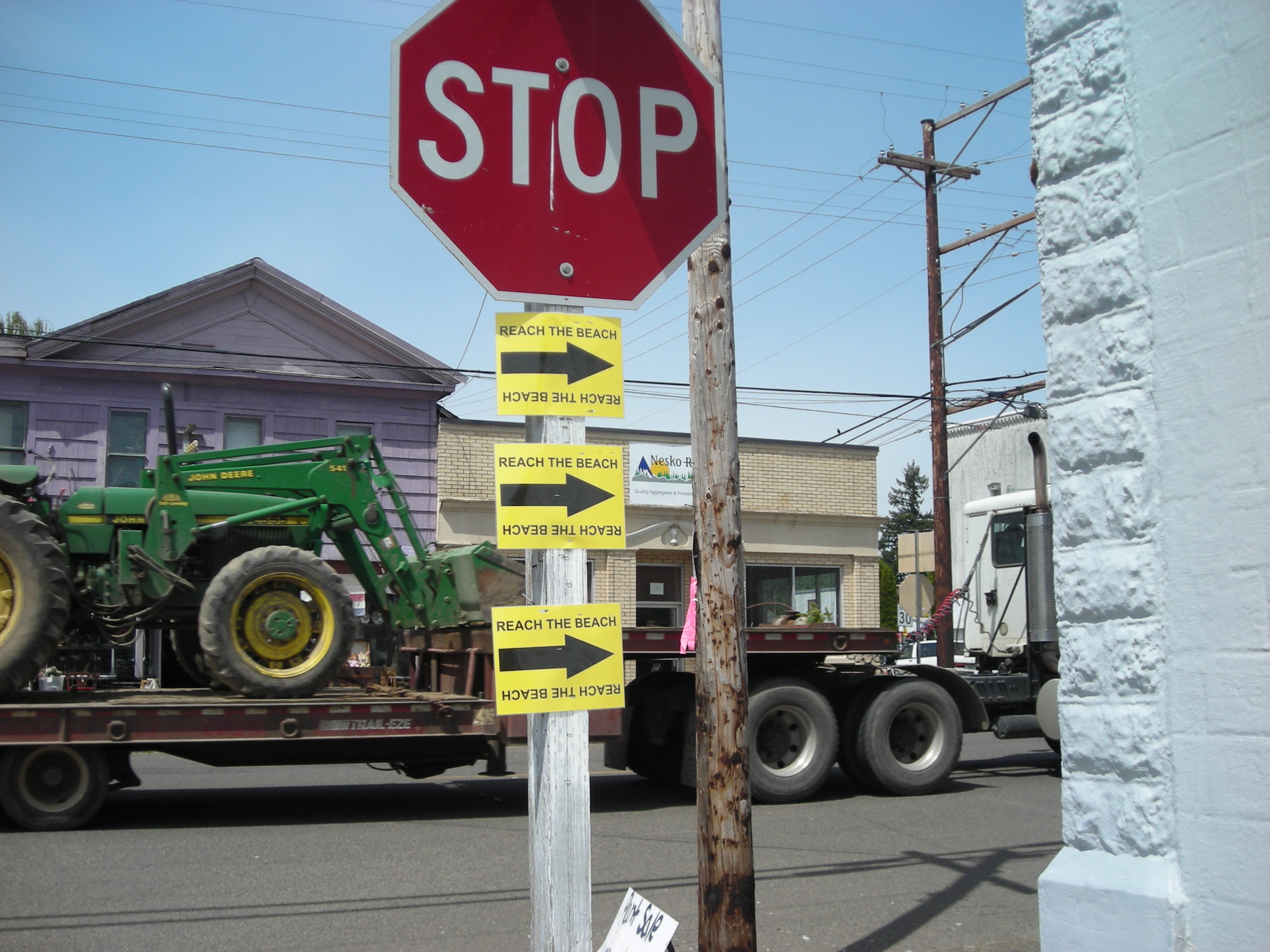 Okay, so here goes…Some of yesterday is still a blur but I’ll do my best to recount it. I am glad we met up in Amity and did the last 55 miles together. It made the experience so much better. We headed out of the Amity starting point and looped through the town until we got to the back road. For the next 10 or 15 miles it was light rolling hills through farm country. I can’t get over how gorgeous the entire ride was. I wish I could have had the opportunity to take more scenic pictures but…I was kinda riding a bike. 😉

That’s Michael in front of me. Mr. 118! I was 3017. According to Michael, I was faster than I’ve ever been on the bike. He said I was going at least 15 mph. I attribute that to the Mentality of Race Day. I totally get the “Race Day Bug” and I’m amped, energetic and faster than I normally would be in training. I was shot out of a canon for most of my portion of the ride. I forgot, honestly, that Michael was probably tired from already doing 30 miles before we got together. 🙁 I’m sorry, babes!

Reach the Beach sold out and there were actually 3,000+ bikes on the road yesterday! It was such a cool experience to ride with so many people. I can’t get over how much fun it was. Now the first difficulty: THE WIND. We were eating the wind the entire time. It made the ride more difficult, for sure. It was like nothing I’d experienced before. 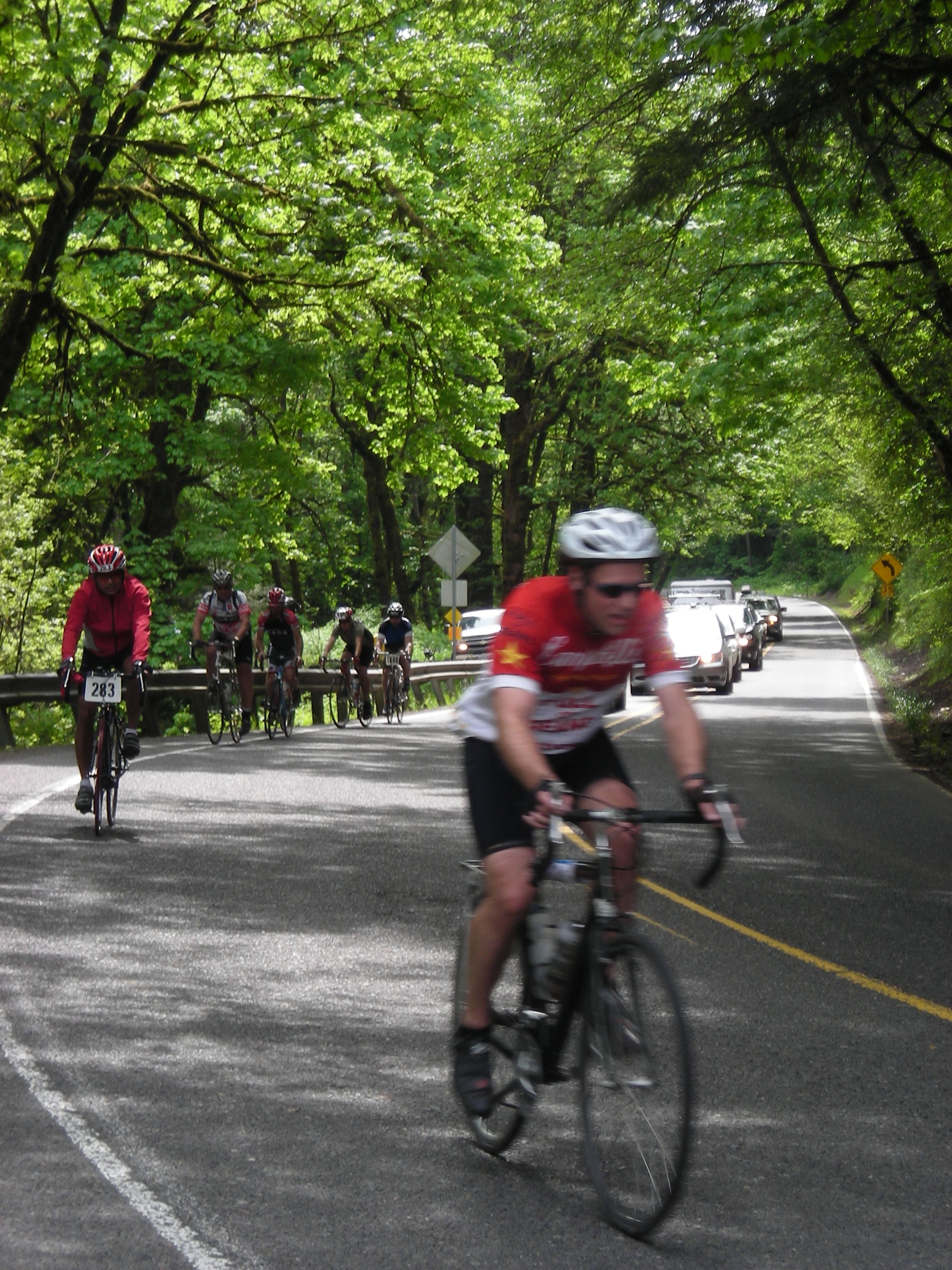 On the route, there were many bike teams that passed me. They were usually groups of 4 or 5 people riding together with similar or matching Jerseys. They rode very close to each other in a single file, maintaining the same speed, and they took turns Drafting. It was a very cool thing to see first hand. They seemed to have the routine down to a science. Guy #1 would eat the wind for a few miles, signal the guy behind him and then move to the left side. Guy #1 would slow down while everyone else moved passed him and he’d move to the rear positions. Then Guy #2 was now Guy #1 and the process would continue. When I watched Tour de France with Michael last year, we talked about it a lot but I didn’t quite understand it until I experienced it yesterday.

The cool thing about Drafting is that it doesn’t wear you out as fast. The reason is that all the guys behind Guy #1 aren’t getting the brute force of the wind. They are able to pedal with almost EASE until it’s their turn to be up front. I learned this in the first 5 miles when the wind was a shocking wake-up call to me. I quickly started riding with the other groups and drafting off of them. It helped a lot and I was able to go as fast as I did.

After about 15 miles, I came to my first Rest Stop. I used the bathroom, refilled my water, and got some snacks.

Some people were stretching and enjoying the sunshine. 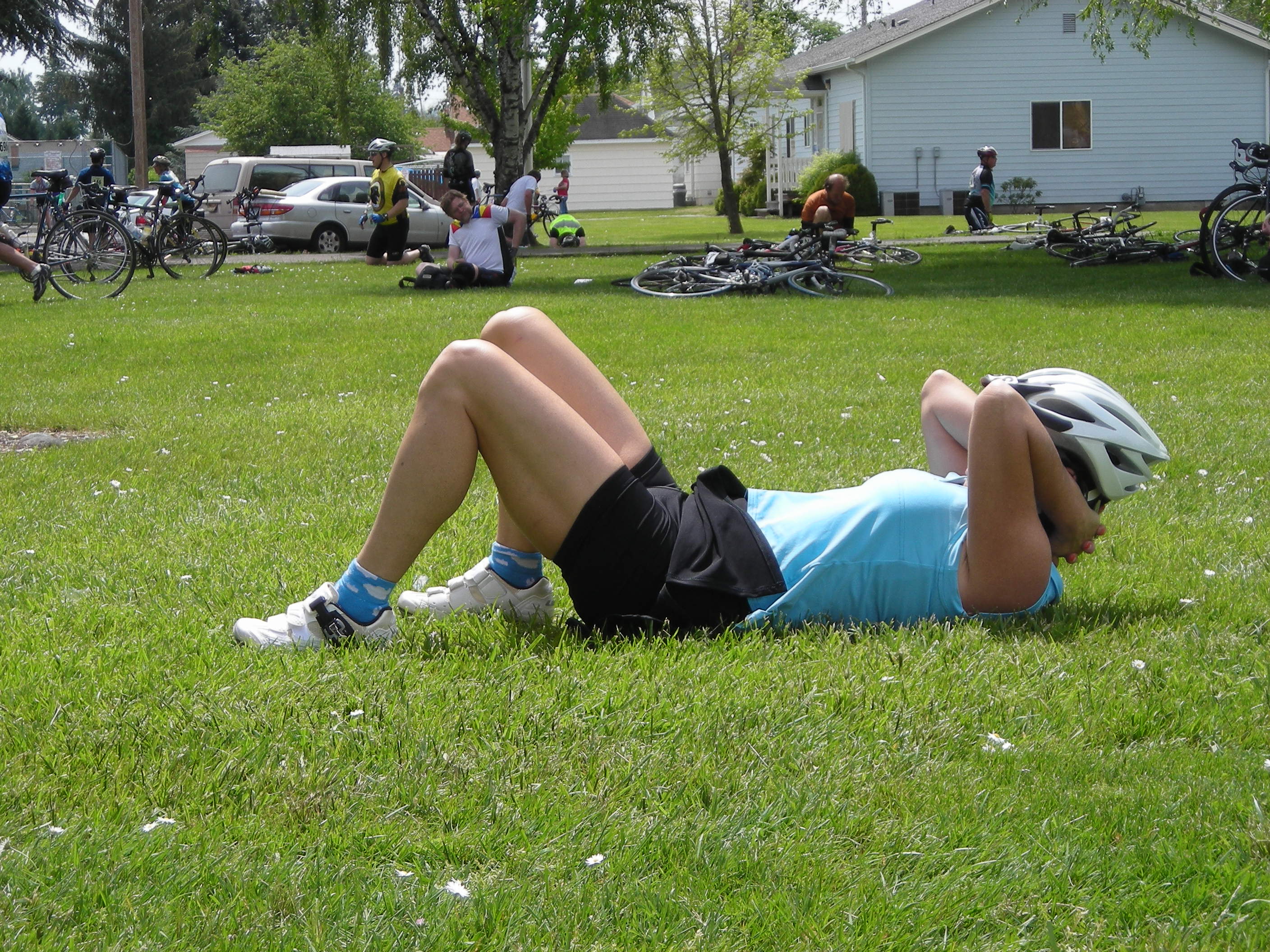 We didn’t stay at any of the Rest Stops for very long. I’d say about 10-15 minutes each time. We were determined to keep riding! 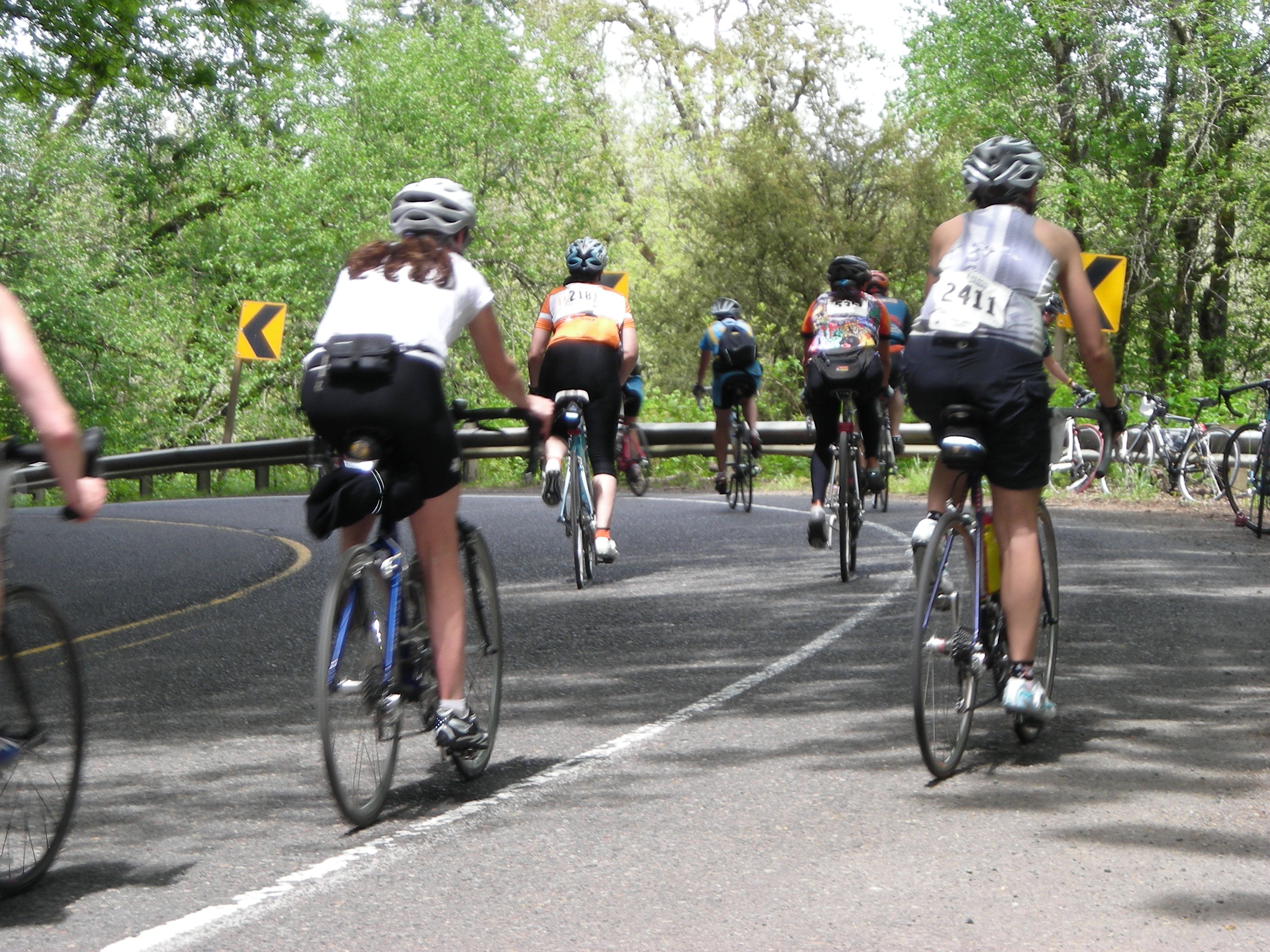 There were lots of hills in the second part of my ride. More to come later!