Time for the second update. You can catch up here: So it Begins and Dairy-Free Update #1.

I still don’t feel any different. I suppose I feel “healthier” but I don’t see a change in my skin or my runny nose issues. Michael, on the other hand, remarked after only  a few days that going gluten free has made him feel a lot better. He has a narrow esophagus and that causes swelling, snoring, etc. He said it feels like his esophagus isn’t swollen anymore.

One thing I DID notice was that my taste buds have changed.  Not really eating candy/chocolate/sugar for about two weeks, when I do have any candy it tastes weird. I had a few pieces of sour gummy bears at work (no dairy or gluten in them) they tasted nasty. It was like eating chemicals. My tongue felt weird and not because it was supposed to be sour candy, but it felt tingly like a chemical reactions–if that makes any sense.

I did have one sort of “cheat” meal. I didn’t plan on having ANY cheat meals or cheat days in February but I already had plans with my friend Erika to go out to dinner at an Italian restaurant. I tried my best to find something on the menu that wasn’t pasta in a cream sauce but it was hard! I *think* I was successful. I asked the waitress if they had anything that was gluten and dairy free. She surprised me by saying that yes, they did. They had gluten free pasta and the marinara sauce was the only non-dairy sauce they had. At least it was something.

I ordered the gluten-free penne with marinara. Originally I wanted meatballs but she said they were made with parmesan, so they substituted sausage. I also got a salad and they left off the cheese. The waitress said the walnuts were cooked in butter, so she substituted toasted hazelnuts instead. I was really appreciative that she had other options available for me. I’m slightly skeptical that the penne was actually gluten-free because it tasted just like normal pasta. BUT I’m hoping…

The second week is when I craved desserts. It wasn’t a physical craving but more of a mental one. I wanted a treat! Instead of having a piece of chocolate with lunch every day, I tried raisins. It helped quite a bit but didn’t completely cure the cravings.

Our house was also free of any kind of dessert and that kind of frustrated me. I want something sweet! I made Jello once, which helped. I also had some peanut butter and honey on gluten-free crackers which was a nice treat but still, I needed more. 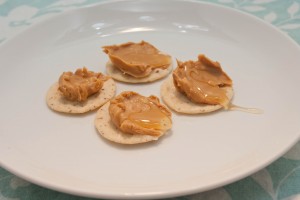 I will admit, I was struggling with the no chocolate thing. I went to the grocery store ($50 in food) and concluded that you have to be rich to be on any kind of dairy or gluten diet. That stuff is so freaking expensive it’s ridiculous. I did splurge and buy one high priced item — gluten and dairy free chocolate chip cookies. I was desperate.

The cookies were decent but not the greatest. It was a good substitution but didn’t come close to a homemade chocolate chip cookie and didn’t give me that satisfied feeling after I ate it. 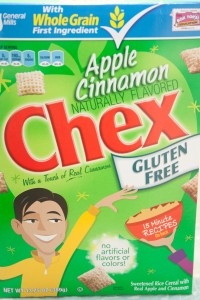 I also got a box of apple cinnamon chex cereal. It definitely works in a pinch for a sweet tooth! I opened the box and ate handfuls, unfortunately, because it was like crack. Oh so good. 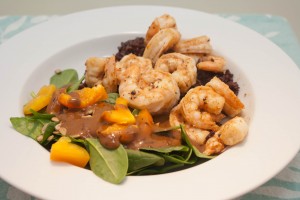 One dinner that I really liked wasn’t all that out of the norm for us. Michael sauteed some shrimp in coconut oil (the first time we’ve used that) and sprinkled cayenne pepper on the shrimp. My mouth was burning, but in a good way. I also had some black rice and a spinach salad. I loved all the flavors and the simpleness of the dinner. It took less than 60 minutes to do everything and most of that time was letting the rice cook. 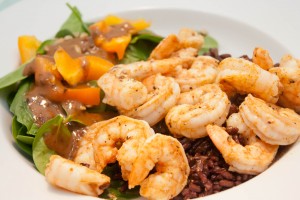 I like shrimp because a serving size is 100 calories (around 9 or 10 shrimp) and it’s a healthy protein that’s easy and fast to cook. It’s really an ideal meal for a busy work night. The entire dinner was less than 500 calories total and I didn’t feel hungry afterward.

One night I had a dream that I was at a restaurant eating freshly baked bread that was oozing with butter. It was fluffy and thick with a crust to die for and the butter was drenching my hands. Talk about a food p0rn dream! Then the next night I had another–this time it was a Middle Eastern restaurant and I was eating lots of bready things. 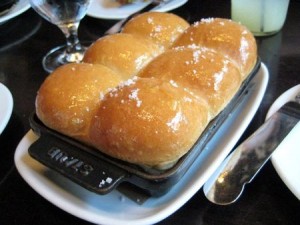 Gluten is sneaky. It’s in things you’d never think it would be in. Same with dairy. But if you look hard enough, you can find some tasty treats. Like this one I had for lunch one day: 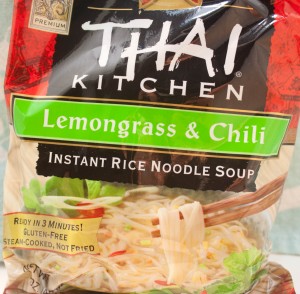 I think it’s important to change your thinking to what you CAN eat, not what you’re being denied. If I focused entirely on everything I can eat, it will make me crazy and I’ll fail!