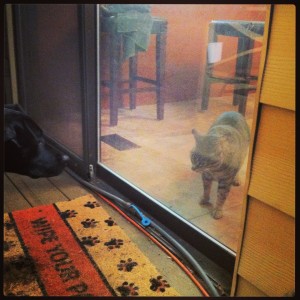 So that post yesterday about the progress the beasts were making was probably premature. Bella and Fat Kitty are on a standoff currently. Fat Kitty is back to being pissed–growling and hissing. At least he’s not running anymore so Bella doesn’t chase him. But they still aren’t cool together and I have to keep an eye on them when they meet in the hallway.

Over the weekend when Michael was gone, my mom and I puppy-proofed the garage and decided to let Bella hang out in there roaming free. Just as a test. It was only for about an hour while we went swimming. I got home and when I entered the house there was a flash of black in the hallway–kind of like in the Sixth Sense when the kid sees the dead girl run down the hall in a flash. Just like that. Chills ran up my spine. WHAT THE HELL?!?!

HOW IN THE HELL did she get into the house?!?! My mom went to check on the kitties to make sure they were okay, I put Bella in the backyard and saw that she had clawed her way into the house. 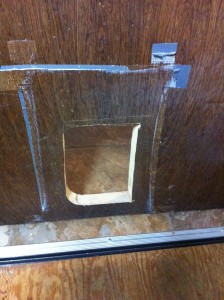 4.5 years ago Michael blocked the cat door from the kitchen into the garage with cardboard and duct tape so the kitties wouldn’t get out. Bella had clawed, chewed and ripped it down and escaped that way!

But that wasn’t it. She had pulled a bunch of stuff off the shelves in the garage so things were strewn around. All the shoes that were on the shoe shelf were strewn around. And Bella had chewed up my brand new rain boots. The picture doesn’t do it justice. They were destroyed. 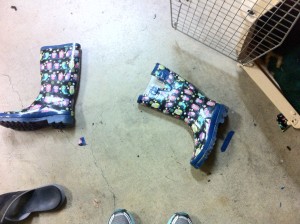 She also had grabbed Michael’s bike helmet off his bike (thankfully she didn’t do anything to the bikes) and had hid it in her crate under her blanket. What the freakin’ hell?!?

It’s weird because Bella hasn’t shown any signs of being a chewer until this event. We gave her two different kinds of bones and she couldn’t be bothered with them. Clearly she was pissed about me being gone all weekend dress shopping, and she was showing me how mad and lonely she was. But damn! I was not a happy camper.

At least Bella hasn’t discovered my book collection and destroyed those…. 🙁 Now for the graceful segue-way to talk about books….

It’s been a busy summer but I still got some good reading in. Flying to California gave me two hours both ways to read some books! I mean, what else are you gonna do for two hours on a plane? Here are a few of the books I read this summer that I really enjoyed: 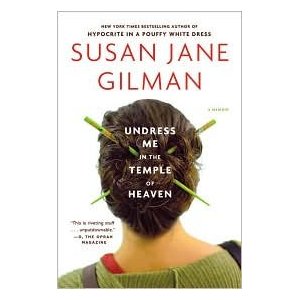 1. Undress me in the Temple of Heaven by Susan Gilman

This book took me totally by surprise. I thought it was going to be just another memoir but was blown away and experienced so many different emotions…where to even start? So the memoir is by Susan who graduated from Brown in 1986 and went to China with her best friend Claire. They were going to be backpacking around the globe, but didn’t make it any further than China.

At first, I hated both the characters. I loved the writing style, was pulled in by the store, but the two girls were horrible, horrible people. They were the stereotypical privileged white Americans. There were several stories in the book that painted them as very ugly people because of how they used, manipulated and mistreated some of the people they came across on their trip. Yet at the same time, needing them for help. This was a major turn off and I wondered, How is this book so highly rated by readers? These girls are terrible people! But boy oh boy did the book redeem itself. I don’t want to give the ending away because it was so astonishing (although I did guess it pretty early on in the book) but you must read this!

2. Orange is the New Black by Piper Kerman

I actually read this book a few years ago after a friend recommended it. When the new TV show came out and I realized it was from the book, I told everyone I knew to read the book. The book was so good! It’s been a few years so now that I’m watching the tv show, it’s reminding me of it. The show is kind of campy and in the vein of Weeds or Sex and the City, but Michael and I are both enjoying the show. 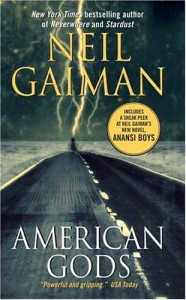 This is another author that I’ve heard about for a long time but never read the books. My book club read his newest book, The Ocean at the End of the Lane, and I really liked his writing style. It was fantastical and childlike. He was able to create another world that felt real. American Gods is a favorite of many people and I enjoyed the book and its characters. I’m not a huge fan of fantasy novels but American Gods had just enough for me. My goal is to read the rest of his books! 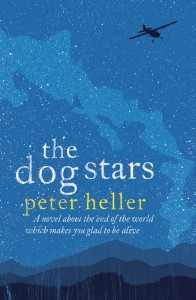 5. The Dog Stars by Peter Heller

I love dystopian, end of the world type of books. This book was along those lines. The “end” had already happened and it was a story of the aftermath–years later. At first the writing style was difficult to read–it was almost like poetry–and reminded me a lot of The Road in style. But half way through the book I didn’t mind the writing style as much.  There were some parts of the book (that I won’t spoil) that were difficult to read but overall I loved this book and would recommend it to anyone looking for a story about survival and humanity.

What about you? Read anything good recently? Please share!

24 thoughts on “At Least Bella Hasn’t Eaten My Books”