A few weeks after our wedding the certificate finally arrived. I was slightly disappointed that it wasn’t an actual certificate and just an official form that had been certified. Kinda lame, but whatever. I took a half day off from work to go to the Social Security Office and DMV to get that done first.

I have to say, the SS office is hell on earth. The DMV was actually fine. That took like 30 minutes, start to finish, and they had like 9 or 10 people working the counter so the line moved very quickly. Social Security? Not so much. I got there about a half hour after they had opened and the place was full.

There were people standing, there were a few empty seats but they were so scrunched together I felt claustrophobic. The waiting room sucked. Why did they have to make it so awful? The chairs were all in a line (similar to the photo below) in four rows. Who creates a waiting room like this? 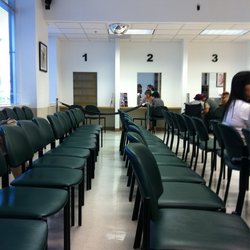 The chairs were all facing the same direction, looking at basically a wall and the screen updating the numbers. Hell on earth. Seriously. The numbers moved at a snail’s pace and seemed to have no rhyme or reason. People were coughing, sneezing, there were kids fussing, there were angry people arguing with the workers. Ugh. Just awful. I was there for nearly an hour and a half and 5 minutes of that was the ACTUAL process of changing my name and getting a new card. 5 minutes. The rest was waiting; feeling like your number is never going to be called.

But, the good news is that it’s done and I am now officially Mrs. W!

For our 1 month anniversary (I know, I know, eye roll) I cooked us dinner at home and I also made Michael his favorite drink–an Old Fashioned. I’ve never made it before so I did my research and I bought some fancy bitters to make it official! Here is the recipe I used:

I didn’t quite get the muddling down, I need to give it another try. Other than that, it was pretty easy to make and Michael loved it! I’m so glad. 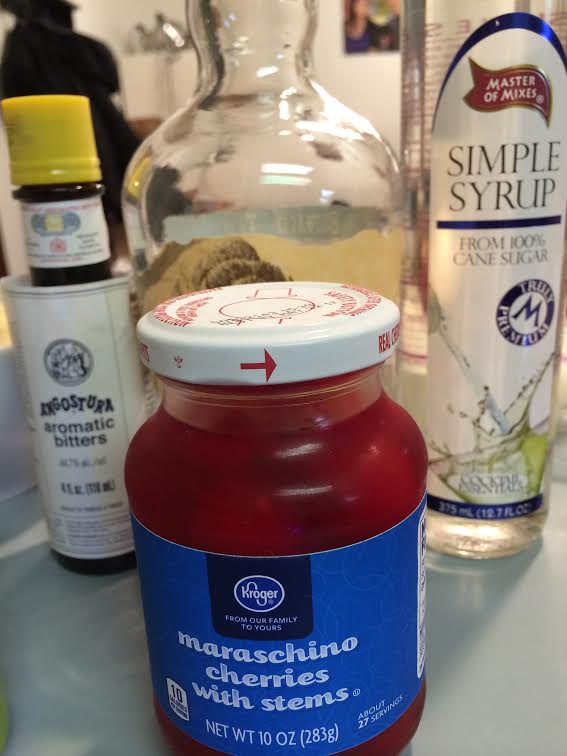 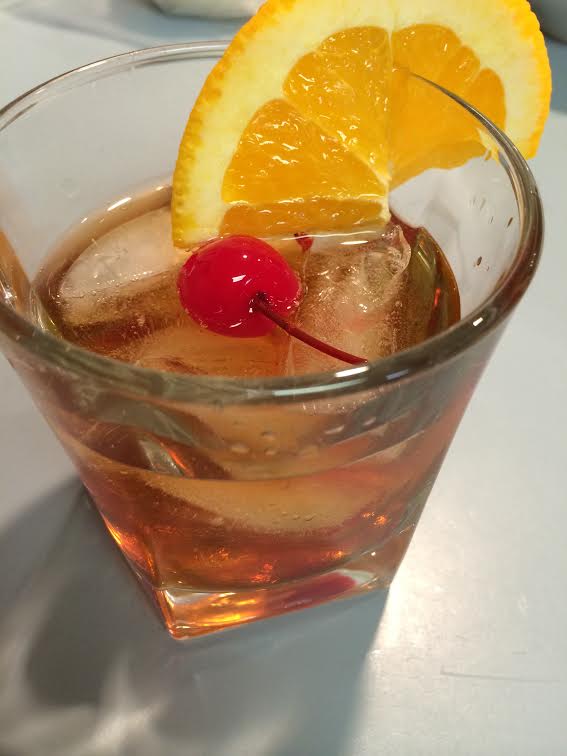 For dinner I made us a baked gnocchi dish and used our new French Onion Soup LeCreuset bowls that we got as a wedding gift. They were perfect for this recipe. No, I did not make the gnocchi from scratch. I’ve never done that before and while sometimes I think I want to give it a try, I also kind just want to use the easy stuff from Trader Joe’s…

The recipe was pretty easy to make. I cooked the bacon and when it was time to add the tomatoes I used canned tomatoes from my garden! It was so cool to be able to finally use them for something and they worked great. I am so glad I spent the time the summer to can all of those romas. 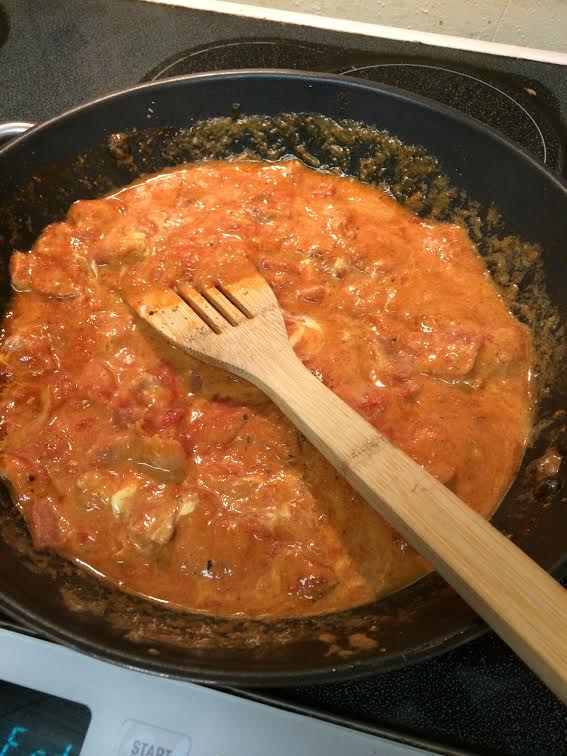 The recipe called for either cream or yogurt. I thought I had some plain Greek yogurt (because I almost always have some on hand) but I was out! I panicked for a second and then googled what alternatives I could use. I found a website that gave some other options and one of them was sour cream–which I did have on hand. So I used about 2 tablespoons of that and it added such a rich, tangy flavor pretty similar to what plain Greek yogurt would have done. It was amazing. 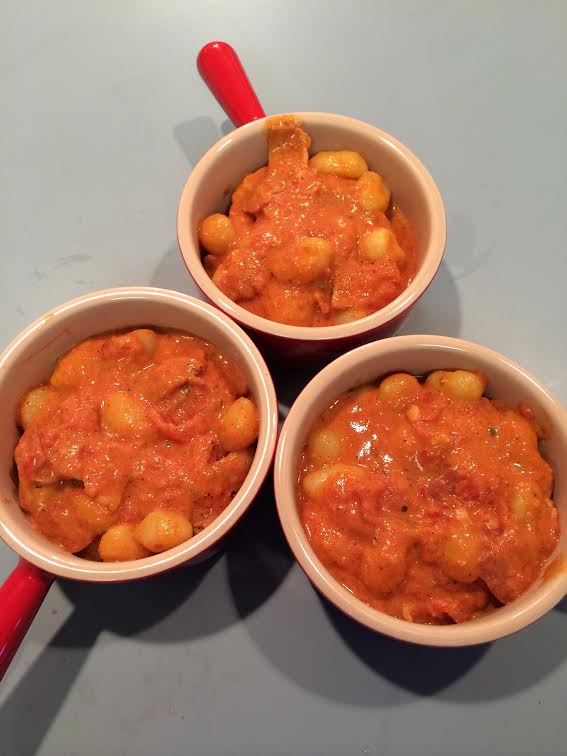 The recipe claimed to be 2-3 servings. When I was measuring everything out I thought it was more like 4 servings. But when I spooned everything into the Le Creuset bowls it turned out to be three generous servings. I love our new bowls! They worked perfectly for this. I baked them for about 15 minutes (using the broiler for the last 5 of those) to brown the cheese on top. 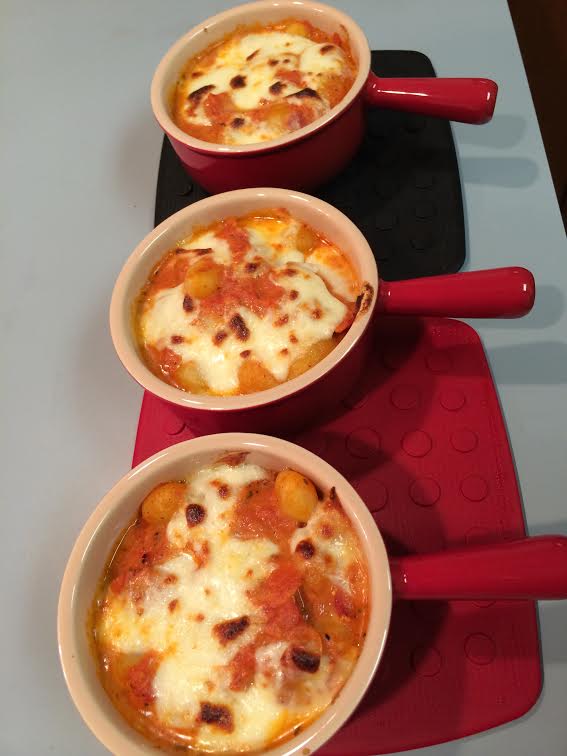 It smelled so good. But then, doesn’t bacon always smell good?? So whenever I do a new recipe I always check the calorie count online first. Sometimes I disregard certain recipes if the calories are too high. This is the ONE TIME I didn’t do that first and of course, the calories were a lot higher than I’d normally like. Oh well, it was fantastic….so worth it! Look at this dinner: 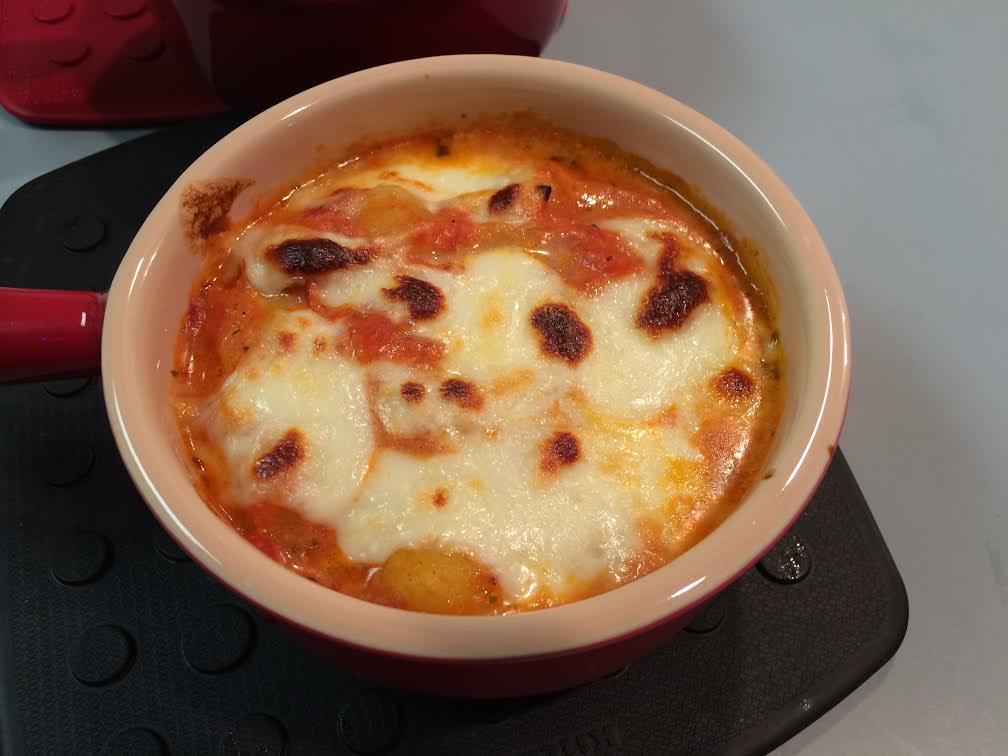 It was so amazing and an easy enough recipe to make for a dinner party and impress everyone. Michael loved it. I loved it. I wanted to keep eating it. This recipe was a winner! Michael mentioned that adding some fresh basil would be nice and I agree. Next time I’ll add some fresh rosemary and basil to the recipe. 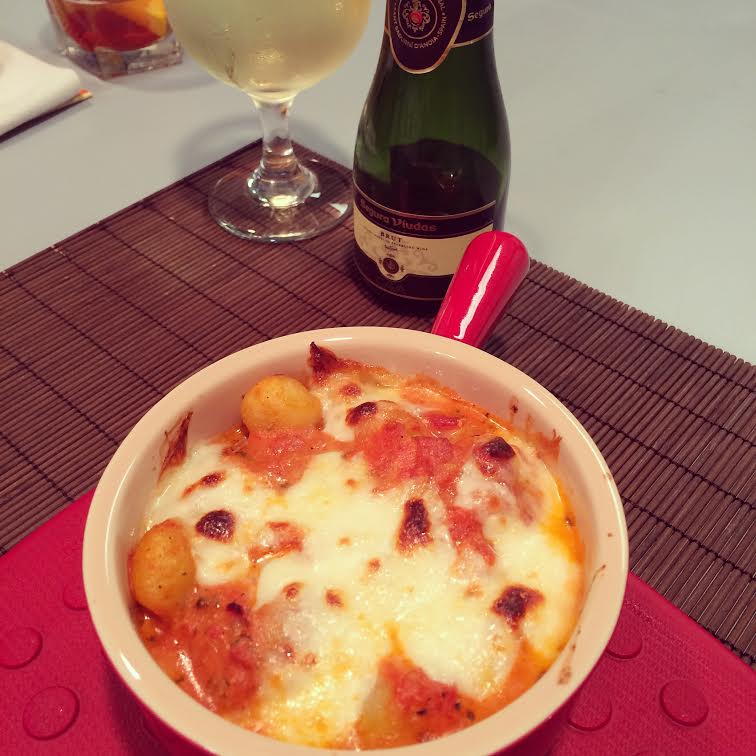 We sat at our bar in the kitchen and ate our delicious dinner, listening to some jazz music. Michael enjoyed is Old Fashioned and I broke out the mini bottle of champagne that we got on our wedding night from the hotel manager that we never actually drank. To one month! Cheers!

I will most definitely be making this recipe again. When I do, I will portion it out into 4 servings instead of 3 and I’ll serve a spinach salad with it or something. That will reduce the calories in the dish dramatically. It’s a heavy dish, so reducing it a little and making a salad would make sense. Make this recipe! You won’t be disappointed.