We’ve had Bella now for almost 9 months. It feels like she’s always been in our life and I can’t imagine NOT having her. We’ve worked out the kinks and for the most part we have a good routine going, she’s well-behaved and easy to train.

Fat Kitty took a long time to come around. For the first month he didn’t come out of the bedroom at all. Then for about a month or two he came out but would hiss and snarl at Bella. It was stressful. I still didn’t know if they’d ever get along. 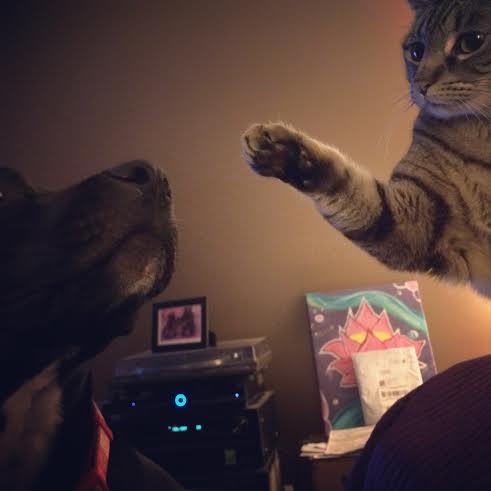 Slap! Slap! There have been half a dozen times where Fat Kitty did the “I’m gonna slap you Bella!” move–but has yet to make actual contact with the dog. He just does it right in front of her face. Establishing his dominance I guess. LOL. 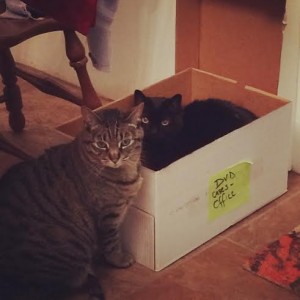 Maya seems unbothered by Bella. I often find Bella and Maya in the same room together and Bella isn’t interested in her and she’s not interested in the dog. Which is a good thing–I thought Maya would be absolutely terrified of the dog. Many times I find Maya sleeping on Bella’s bed. 😉

There’s this new thing that Fat Kitty and Bella are doing. He walks right up to her and they touch noses. It usually happens after Bella comes in from outside. I think he just wants to smell what she was doing outside (he wants to be an outdoor kitty so badly! But there have been coyote incidents in our neighborhood so that’s not happening). It is so cute. It looks like they are kissing. 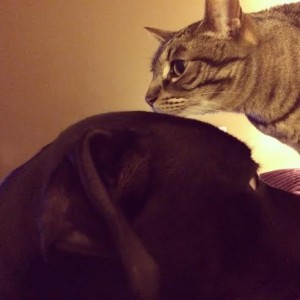 That’s not the best picture of them “kissing.” I’m still working on getting that photo because it’s going to be adorable! I have this one that turned out pretty good: 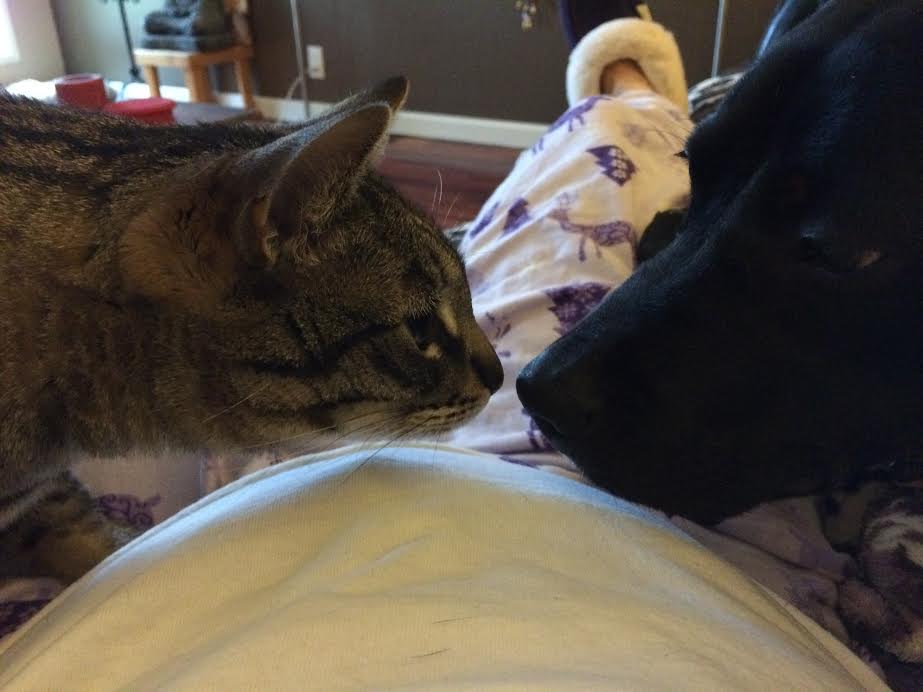 How cute is that? They seem to be getting along well now and Bella follows Fat Kitty around the house always wanting to see what he’s up too. When Bella is playing outside Fat Kitty sits at the sliding glass doors supervising. 🙂 It makes me happy that they are getting along, even if the cat is still letting Bella know periodically that he’s the boss.

Poor Bella is very accident prone, though. Every week she seems to have new scratches, scrapes and owies. She gets a bit out of control when we play in the yard and runs into bushes, the planters, trees…She’s kind of a klutz! Last weekend she had to go to the vet because of an injury. This time it was our fault. 🙁

We were clipping her nails in preparation for her bath. She was doing okay and we were almost done when she moved just as I was clipping. She yelped and jumped off the couch, running into her crate. Poor baby! I hurried after her and thought she was okay but then saw a little blood. I went into our first aid kid to get the stuff that is supposed to stop bleeding (it’s a gel) when we released she was bleeding a LOT. Blood was getting everywhere! It was so horrible!

I tried wrapping her paw to stop the bleeding but there was too much. Michael and I raced to the vet, which thankfully wasn’t very far from the house. They patched her up and wrapped her paw in a bandage. The vet said this was common and not a big deal, that she sometimes still nicks her own dogs when she’s trimming their nails. It may be common and not a big deal but it was for us! We sat in the waiting room at the vet while they helped Bella, my hands and shirt were covered in blood and I was crying. What a mess! 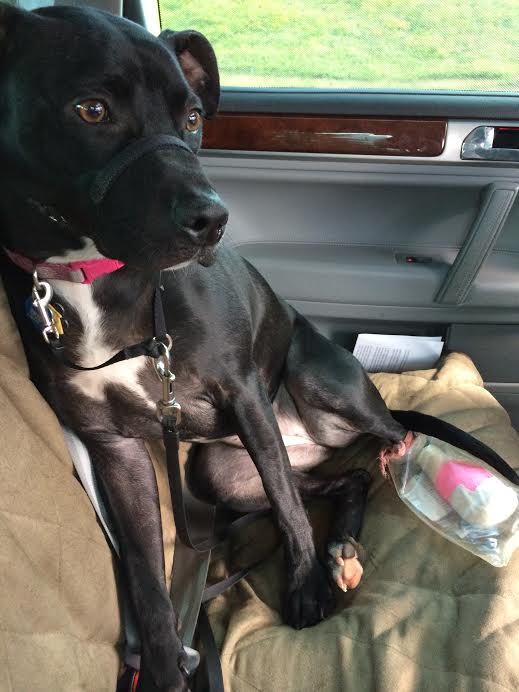 I felt so absolutely horrible that this happened and she got hurt. My poor baby! The vet said she’d be okay and to come back in a few days to get the bandage off and they’ll take a look at her nail. We got home and I cleaned up all the blood. It looked like a crime scene in my house. Horrifying and very upsetting. I think we will be taking Miss B to the groomer from now on.

This was the three of us cuddling on the couch after the vet visit. Fat Kitty was concerned. 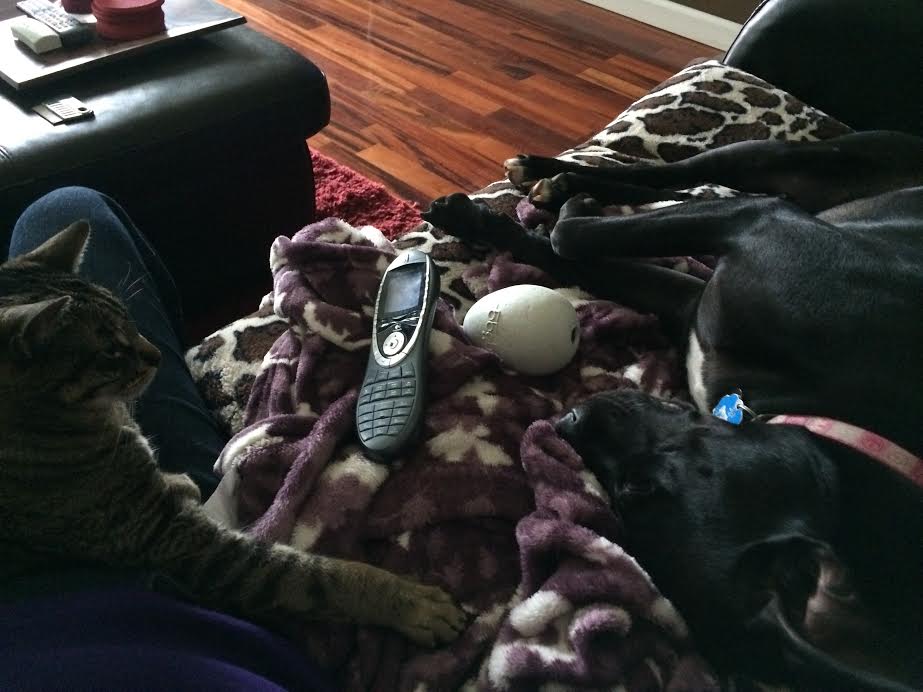 He sniffed and checked her out while she recovered on the couch. Bella didn’t seem too uncomfortable and her tail was wagging happily as we cuddled on the couch. SIGH who knew that having a dog would be like having a kid–worrying about every little thing and freaking out when they get hurt! I feel like the worst mom ever. 🙁 I posted about it on Facebook and tons of friends shared their stories of the same thing. I don’t know that that really made me feel better about it but at least I’m not alone, I guess!

On Monday we got home from work and Bella had decided she’d had enough. She chewed through her cone and then chewed off her bandages. Little stinker. The whole thing was destroyed! But clearly she was feeling better.

A few days later, Bella’s new bed (bought off Groupon) arrived. We’d been talking about letting her out of the crate at night lately. It was always the goal. But I was nervous about letting her run free through the house while we slept. I wanted to wait until the cats were okay with Bella and everyone was getting along. 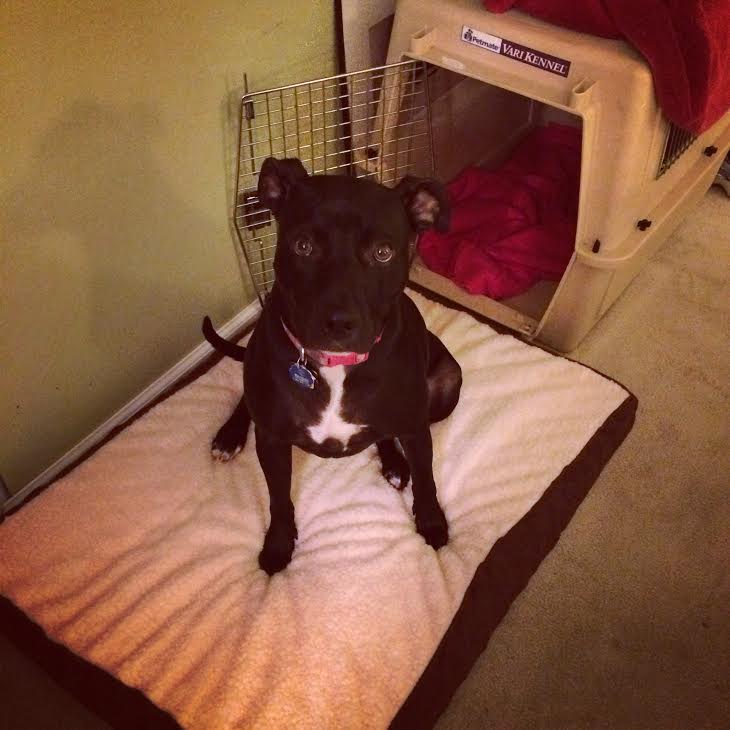 The few times we’d left Bella alone for short periods of time she’d wreaked havoc (i.e. chewing everything she could find). I was a little nervous. But she did great! She slept on her bed the whole night and was there in the morning! There weren’t any incidents and the cats were just fine! Bella will be able to sleep outside her crate at night now!