My goal for 2016 was to read 80 books. In past years I read A LOT more than this year (which I knew would be the case) and in fact, each year I went over my book goals and so I increased my goals by a little bit each year. 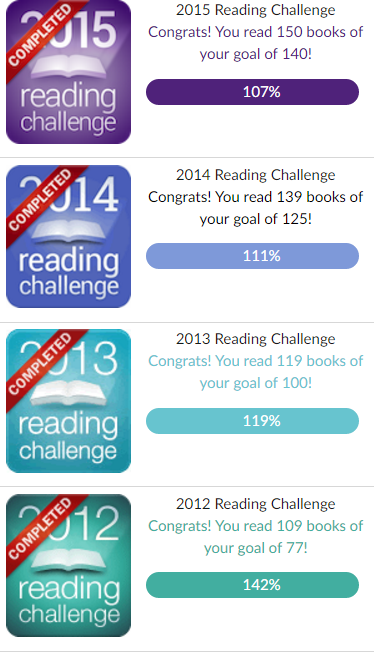 I knew I’d be a little busy this year and probably wouldn’t be reading as many books as I used to, which is why I set my goal so low. But still, by the time December came around I was still way behind on my goal. I also read some not so great books this year. I don’t know how I got in such a rut but I read some duds. Oh well. It is what it is!

Here is the final book review of the year:

I really liked this book! It had mixed reviews. Lots of people loved it, some people said in their reviews that it was disappointing or that they hated the main character…but I never felt that way. It was really exciting and a fast read. The book starts with a bang and doesn’t let up.

I honestly didn’t know a lot about the premise so I didn’t go into it with preconceived notions. Lo Blacklock is a reporter with a borderline drinking problem and relationship troubles. The book starts out with someone breaking into her apartment in London, while she was home, and burglarizing it. She wasn’t assaulted but the trauma is overwhelming for her, rightly so, and she’s shaking and a bit paranoid as a result. She’s booked to go on a cruise and write a story about it for her magazine and that’s where the “murder mystery” –that was reminiscent of Agatha Christy– takes place.

I found the book a fun, interesting read and would definitely recommend it. 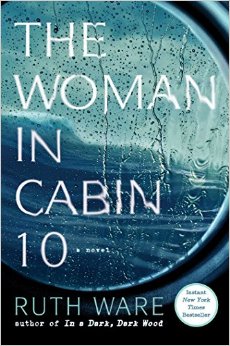 The main character, Gretchen, leaves San Francisco and returns home to Singapore temporarily when her marriage ends abruptly. Her husband has decided to live with his 20 year old teaching assistant. In Singapore she stays with her aging parents and works temporarily at her family’s soy sauce factory that was started by her grandfather.

The story is about redemption, healing, reconnecting with her parents, finding herself after divorce and family secrets.

I liked the book a lot. It was interesting reading about the cultural differences. I went back and forth between liking and disliking the main character, though. Sometimes I liked her and then sometimes she came across as kind of a terrible person–not very nice to her friends, kind of bratty and self-absorbed. I know that characters need to have flaws and grow from them but…if not done well in a book it can really detract. This book was right on the edge for me in that aspect. 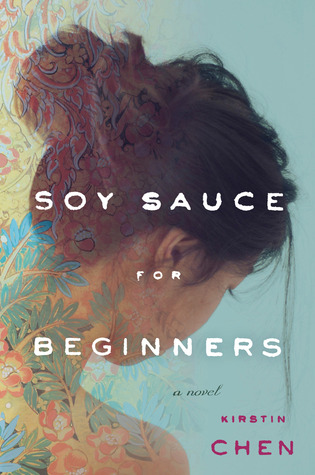 In the beginning of this book I found it far-fetched and not realistic. The premise was an investigative reporter comes to a small town to investigate a shocking murder that the local police are either covering up and/or not investigating and when Kelsey arrives, the police chief immediately gives her all the details thus far and encourages her to investigate and solve the crime. In that aspect I was like “Really?” But I gave it a chance and the book turned out to be pretty good, if you can get passed that first little part that isn’t realistic.

The book alternates chapters between Kelsey’s investigation and Becca’s life (the victim) 2 years leading up to her murder. It was interesting reading her story and there were twists and turns at the end that surprised me. All in all it was a good read. 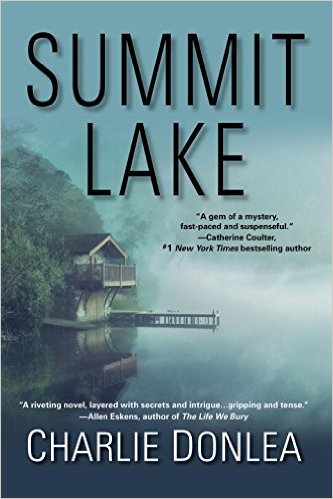 4 ) Only Ever You by Rebecca Drake

At the park one day, Jill’s daughter, Sophia, goes missing for a few hours. She’s found, seemingly unharmed and they go on with their life. A month later her daughter is kidnapped and the book is about the investigation, her marriage falling apart, dealing withe previous death of her son, and trying to find Sophia.

There were a lot of things about the book that seemed unrealistic but the writing was pretty good so I kept reading. About half-way through the book got really exciting and I stayed up too late many nights in a row trying to finish the book! The ending was somewhat satisfying–I don’t want to give it away–but there were a few things that felt too “neat” for me in the conclusion. Overall it was a fun read, though. 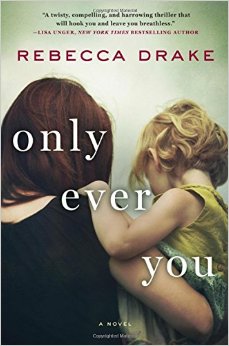 Great read! Matt Jones just got a promotion to homicide detective in LA. (I love detective novels that take place in LA!) He goes out to celebrate with a friend the night before he’s supposed to start in Hollywood when he gets a call from his lieutenant that he needs to start immediately–there’s been a gruesome murder. When Matt gets to the scene he discovers he knows the victim.

There were three major plot lines in the book that wove together. There were dirty cops, serial killers, family secrets and hitmen…The book was really, really good–so good I finished it and immediately downloaded book 2! 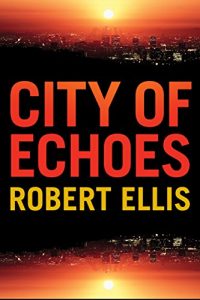 6 ) What’s Going On in There? How the Brain and Mind Develop in the First Five Years of Life by Lise Eliot

This was a really interesting book about how the brain grows and develops and how everything works “in there.” The book is written by a neuroscientist but it’s fairly easy to read and while it’s detailed and technical, I never felt like the science was confusing or boring or over my head. 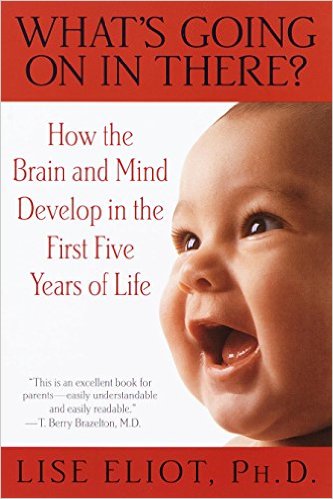 I loved this book so much! It was a very emotional, exciting, suspenseful, sweet, scary, and fascinating read.

Lore arrives at the hospital about to give birth, alone. She has a very explicit birth plan and is rigid in her desire to stick to the plan. Lore’s story unfolds, amidst the labor pains and contractions. You find out her marriage recently ended and she’s all alone in this new adventure. I absolutely loved the way her story unfolded. And her nurse, Franckline, was an immigrant from Haiti who was also pregnant but no one knew yet. Not even her husband. They’d suffered a loss in the past and she was too frightened to tell anyone until everything was okay with the growth.

The way the book was written you kept reading and reading and reading because there was NEVER a good place to stop reading! I stayed up SO late reading this book! My only complaint about the book was that it was too short and I wanted to know more! I hated how it ended (not the way it ended) and I wanted just a few more chapters to wrap things up. 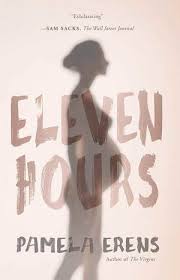 This is book 2 in the series. I liked the first book so much I immediately downloaded the second one and read it. The story takes up right where the first book left off. They are still on the hunt for the serial killer that got away. This time, Detective Jones is asked to join the FBI taskforce because the killer has now moved on from LA to Philly and Matt Jones goes there to help catch him. Matt quickly discovers that the current new killings were the work of a different serial killer, not the one he was looking for. Except the FBI disagrees.

The new killer is way different–and the story is very dark, very hard to read, almost too horrible and twisted. So be prepared. Other than that, it was a good read and the loose ends from the first book are wrapped up! 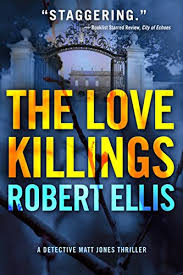 This book is more about the main characters than about the missing girl. Edith is a 20-something woman of privilege who has suddenly gone missing. Manon is the detective trying to find her before she goes from a missing person to a homicide. It takes place in England and while it’s a police procedural-type novel, it’s really more about the main characters and their lives. Manon is a 39-year old single woman who is doing online dating (and it’s going terribly) and her partner Davy is in a horrible relationship. The book is a good balance of these family secrets, relationships, and investigation. There were parts of the story that were a bit slow, but I hung in there and the ending was—interesting. It was not what I was expecting at all. 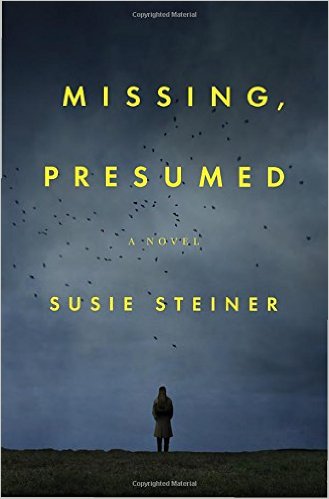 10 ) Reclaiming Conversation: The Power of Talk in a Digital Age by Sherry Turkle

This was a pretty eye-opening book. I knew that cellphones have become a leash, a crutch, an obsession, for a lot of people but I didn’t quite know just how detrimental it is becoming to the growth of kids in this new digital generation. This book pointed out a lot of the things that are off with people–kids lack empathy now because they didn’t learn basic things like how to apologize in person, how not to say something hurtful to someone because interactions are done ONLINE and they don’t see the other person’s face when they hurt their feelings. This was pretty shocking to read.

“Now, people can’t be alone. They need continual contact and support and reinforcement. They want to know they are doing well. [pg 70]”

“We want words to be associated with feelings. Eye contact is the most powerful path to human connection. [pg 36]”

The book spends a lot of time talking about how society is changing, how digital life is shaping our young kids and their reliance on non-verbal communication.

“Studies show that when children hear less adult talk, they talk less. If we turn toward our phones and away from our children, we will start them off with a deficit of which they will be unaware. [pg 22]”

This particular fact was scary to me:

“New studies correlate the growing number of cell phones and the rise of playground accidents because at the park, parents and caretakers are paying attention to phones. [pg 62]”

The author talked about how the obsession with digital communication is greatly effecting relationships (I could definitely relate to this) and workplace interactions.

“Relationships deepen not because we necessarily say anything in particular but because we are invested enough to show up for another conversation. [pg 107]”

I’d give this book 3.5 out of 5 stars. I found it really interesting and fairly easy to read. The reason I didn’t give it more stars is because I wanted MORE suggestions on how to break this habit and do something different. I felt like she spent more time on the negatives and less time on how to change. Here were just a few suggestions, that I did like and plan on implementing in my life:

“And no electronics are allowed in our bedrooms. We have this thing called the dock. And it has all of the chargers and stuff. So, like, at the end of the day all of the phones and tablets and laptops, they all go there…the ritual of the dock frees the family up for talk. And she can get to sleep at night –her phone off limits. [pg 121]”

“Learn to see boredom as an opportunity to find something interesting within yourself. [pg 322]” and “…the experience of boredom is directly linked to creativity and innovation. [pg 39]”

“Take a neighborhood walk — alone or with family or friends — without devices. Experiment with an evening or a weekend off the net…[pg 321]”

I think it’s worth a read to see how things are changing in our society, especially if you have children, but I just wish there was more of a takeaway on what to change with the book. 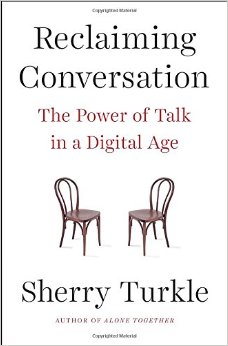