This post will be about some of the race recap before my first leg. Since I was the last runner in the van, I got to see everything happen before I even ran. It was both a blessing and a curse. The blessing was that I felt prepared for what I was supposed to do when it was my turn. The curse was that I had to wait FOREVER before it was my turn! That’s hard to do when you’re excited. 🙂 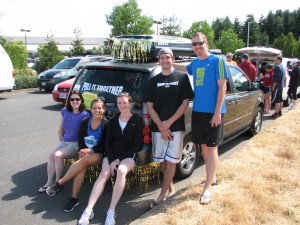 Me, Heather, Janell, James, Allen (Daryl not in pic)

We all met at the van at noon and packed up. We had to drive to the Sandy Fred Meyer for our first Exchange point with Van #1. Our first van had started at 8:45 am and ran down the top of Mt. Hood. Their last runner (Bruce) was supposed to tag our first runner (Heather). 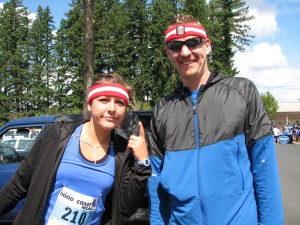 Walking through the packed parking lot, I wondered why anyone in their right mind would try to shop at Fred Meyer on Hood to Coast day. 🙂 I saw so many people frustrated that there was no parking. DUH. 🙂 The parking lot was full of vans. And everyone decorated their vans. There were some really creative ones too. 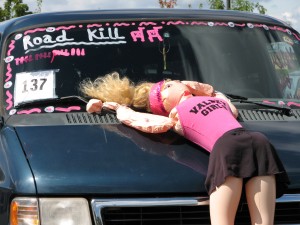 There were also lots of freebies for runners. A Muscle Milk van, a Widmer van, Monster Drink, Clif Bar, just to name a few. We snagged as much free stuff as we could and went to the Exchange Point. This one was on the highway and the nonrunners had to stand on one side while the upcoming runners had to cross to the other side for their Exchange. It was crazy! The highway gets a lot of traffic and I’m sure we were VERY distracting for drivers. I saw three “almost” accidents (rear-endings) and lots of drivers honked and cheered us all on. 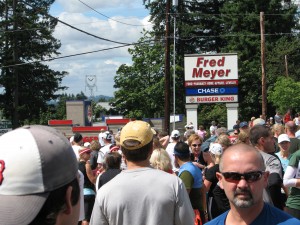 It was a total party atmosphere. Just check out this guy: 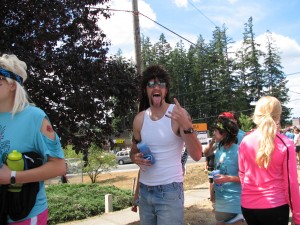 Yes–that is a Mullet wig. 🙂 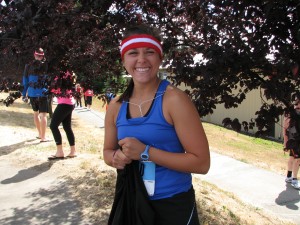 Heather (our first runner) was READY! 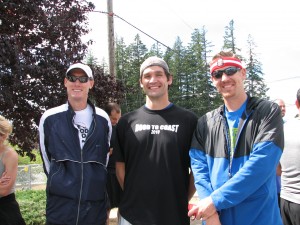 So our team ran in this order: Heather, Janell, Allen, Daryl, James and then me. We tried to keep in contact with Van #1 to find out what time they would finish with their last run to tag us. Sometimes it worked, sometimes it didn’t. It all depended on traffic congestion, organization at each Exchange, and cell service.

Bruce (last runner in Van #1) finally arrived and tagged Heather. She took off running. She was really fast. Actually, most of the runners in our van were really fast. I think Janell and I were the average paced runners.

We got back in the van after the hand-off and drove to the next Exchange Point.  I was amped up with adrenaline. We had finally started!! Whenever it was time for Van #2 to be running, the energy level was high and the pressure to reach the next Exchange BEFORE our runner, was intense. We cheered and encouraged all the other runners, too. We’d drive by them and yell out the windows “Good job!” “You look great!” “Keep running!” 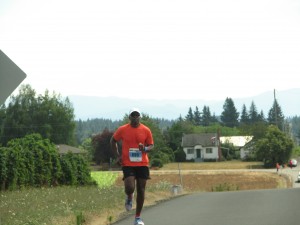 These next legs were very hilly. The book described them as “gentle rolling hills” and that became the running joke in the van. Like “eff these rolling hills!” 🙂 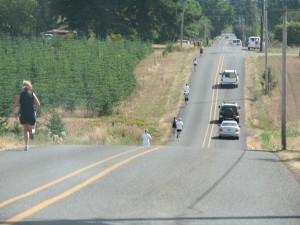 I am so thankful that most of my runs were relatively flat. I don’t think I’d survive Hood to Coast doing the early, hilly legs! We got to the next Exchange and Janell and Heather changed places. Heather got back in the van and we took off to meet Janell. 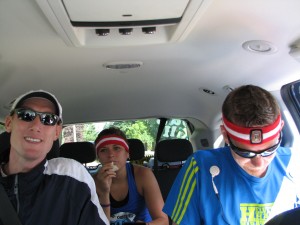 Halfway to the next Exchange we stopped on the side of the road to wait for Janell. Allen (her husband) met up with her and jogged for a moment giving her encouragement and much needed water. Her section was VERY hilly. She looked really tired too.

After Janell passed on to Allen, we went to the other Exchange for Daryl to get ready. He is an amazing athlete and I’ll be posting more about his story later. 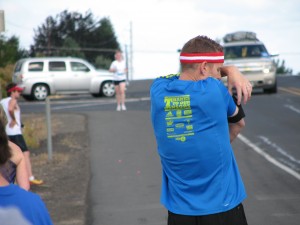 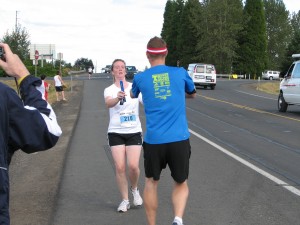 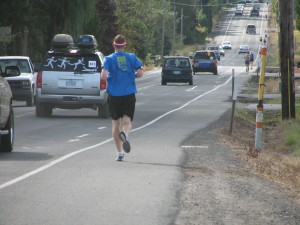 We were getting closer to my time to race and my excitement was building. The anticipation might kill me. 😉 The next runner was Daryl and he rocked like a 6 minute mile. 🙂 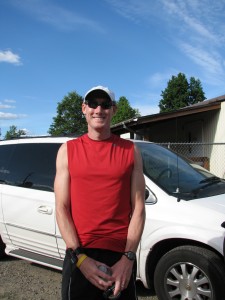 Time for the exchange! 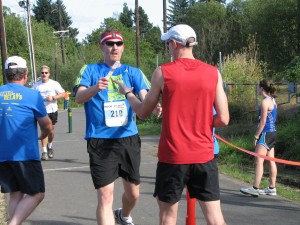 Allen did a great job running and he looked good too. I don’t remember how long that leg was, but he was fast. 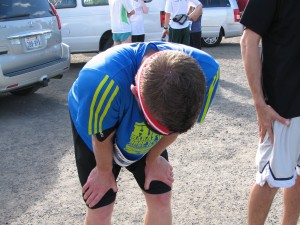 I hope this hasn’t been confusing since this is out of order. So this all happened, and then next James ran and I ran my first leg. Recap for Leg 12 here.