The other day, Tina posted a recipe she found from Real Simple.  She made a Tuna Pasta recipe that looked good and it looked like a cool website so I checked it out and found the above recipe. I knew I wanted to try it! 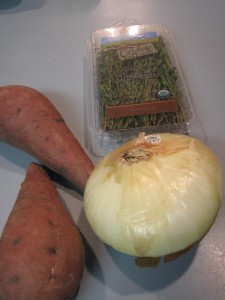 I stopped at the store to get the few ingredients I needed. The recipe said it took over an hour to cook so I hurriedly cut the onions and sweet potatoes and washed the chicken. 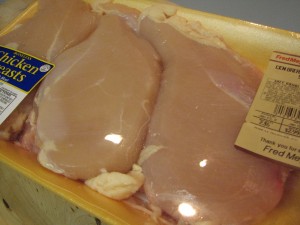 The prep for dinner was super easy and fast. I chopped everything and arranged it in a roasting pan. 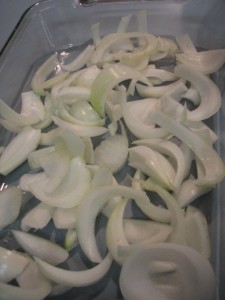 I did not use as much as the recipe called for. And I also made the chicken breast pieces smaller (which bit me in the butt later). 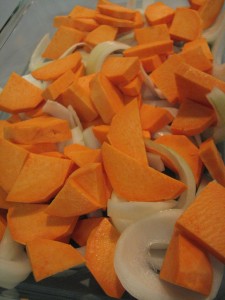 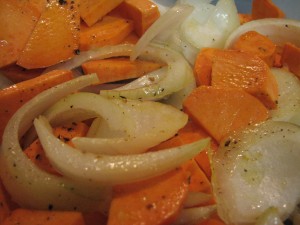 I drizzled olive oil on the veggies, used salt and pepper and then mixed them all together to coat. 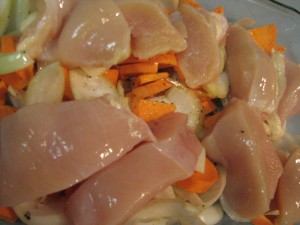 I did the same with the chicken pieces. 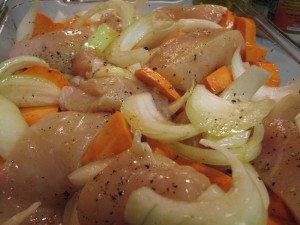 Then I drizzled the maple syrup on the whole thing and mixed it all together. 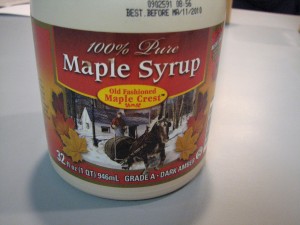 Michael was a little wary about the whole maple syrup thing (he doesn’t like sweet stuff). I wasn’t too nervous because I assumed the syrup would bake off and turn into sugar. I was right the dish didn’t taste like maple syrup at all. 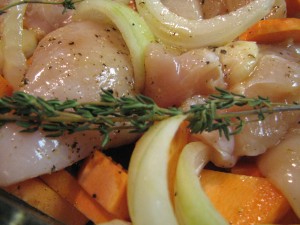 I added the 6 sprigs of fresh Thyme and popped it in the oven to bake for an hour. I checked on it twice during that time. The whole house smelled WONDERFUL. It smelled like roasting vegetables and thyme. Yum. I finished watching “It’s Complicated” (good movie). And I made Michael and I salads while we waited for dinner to cook. 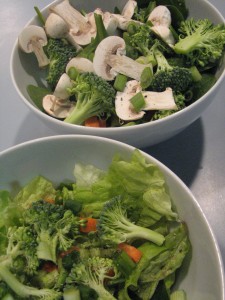 Finally dinner was ready! The vegetables were absolutely amazing. I loved the flavor. Roasting is my new favorite way to do veggies (of course it would be because it’s drenched in oil lol). 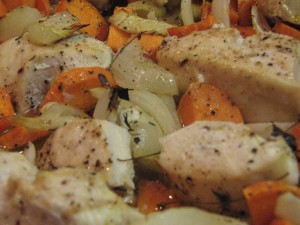 I baked it for 50 minutes even though it called for 1:15 in the oven. I checked on it at 50 minutes and the chicken was done. In fact, since I used smaller pieces of chicken it cooked a lot faster than I realized. 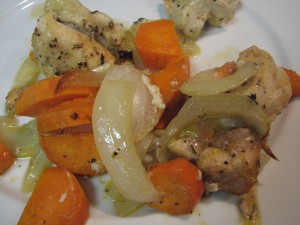 The result? The flavors were great but the chicken was a bit overdone. But then that’s always the case with chicken it seems. It’s such a hard protein to cook correctly!

I would most definitely make this recipe again. In fact I might even throw in some carrots too. It was delicious and so easy to make. Now that I know that smaller chicken pieces will cook faster I’ll bake it half the time and check it.