The first words out of Michael’s mouth the morning of our metric century ride was: “Why did we sign up for this again?” Getting up at 6am on a Sunday is never something one looks forward to…especially when you tossed and turned the night before. But I hopped (crawled slowly) out of bed and got ready for our end-of-summer-adventure.

We had a breakfast of pancakes (I had a piece of bacon and 2 Italian plums as well) and geared up with our spandex, bikes and some coffee, we drove down to Salem for the Peach of a Century ride. I’ll be honest: one of the biggest challenges was our clothing choices. It was barely 50 degrees Sunday morning and as we drove through the valley, a heavy mist hung over everything. It was a cold morning. 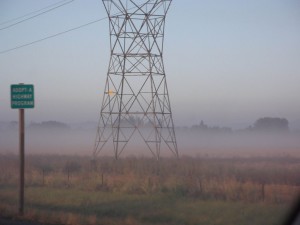 We arrived at the check-in spot at about 8:15 and were faced with a decision. Be cold now but happy later when it’s hot? Or warm now and miserable later when it’s hot? I chose to wear my tights, my cold weather gloves and my arm warmers instead of a jacket. Michael went with a long sleeved jersey. This proved to be a poor choice later. 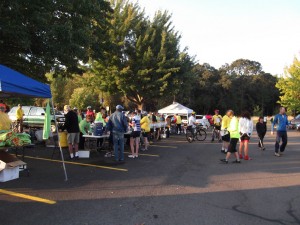 We got our packets and got ready to go. We started out around 8:30 a.m. and I was feeling excited about our day. 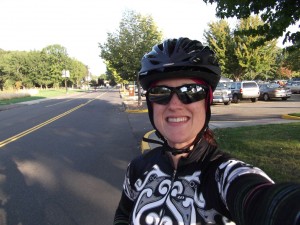 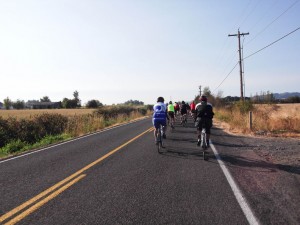 The first eight miles or so were  pretty flat as we rode through the valley. The roads were marked really well and we never had any issues knowing what direction to take. There was spray painted markings on the road saying to go straight, left, or right. 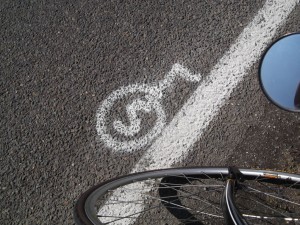 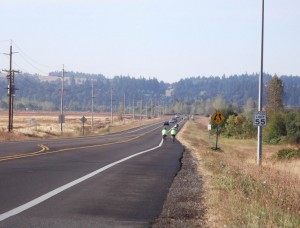 We pulled over at around mile 13 because I was really hot. I took of my arm warmers and switched my gloves to my summer gloves. That helped a lot. It was still a little cool out, especially in the shade, but I felt warm enough with my exercise. 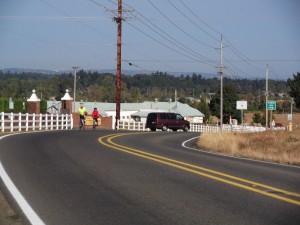 We hit the first decent sized hill and while my legs were feeling a bit lethargic, I made it up the hill pretty easily and felt really good about myself. The 62 mile route was supposed to be fairly “easy”, meaning it didn’t have the crazy elevation that the 100 mile route had, but we still encountered a lot of hard hills. HILLS! Look at that one! 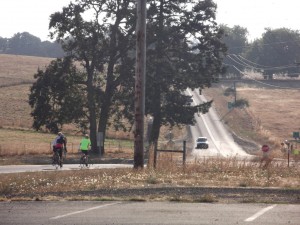 We rode through the rolling hills of the valley, speeding by the farms and barns, the Christmas tree farms and the nurseries. It was a beautiful, scenic area to ride in and there was very low traffic, too. 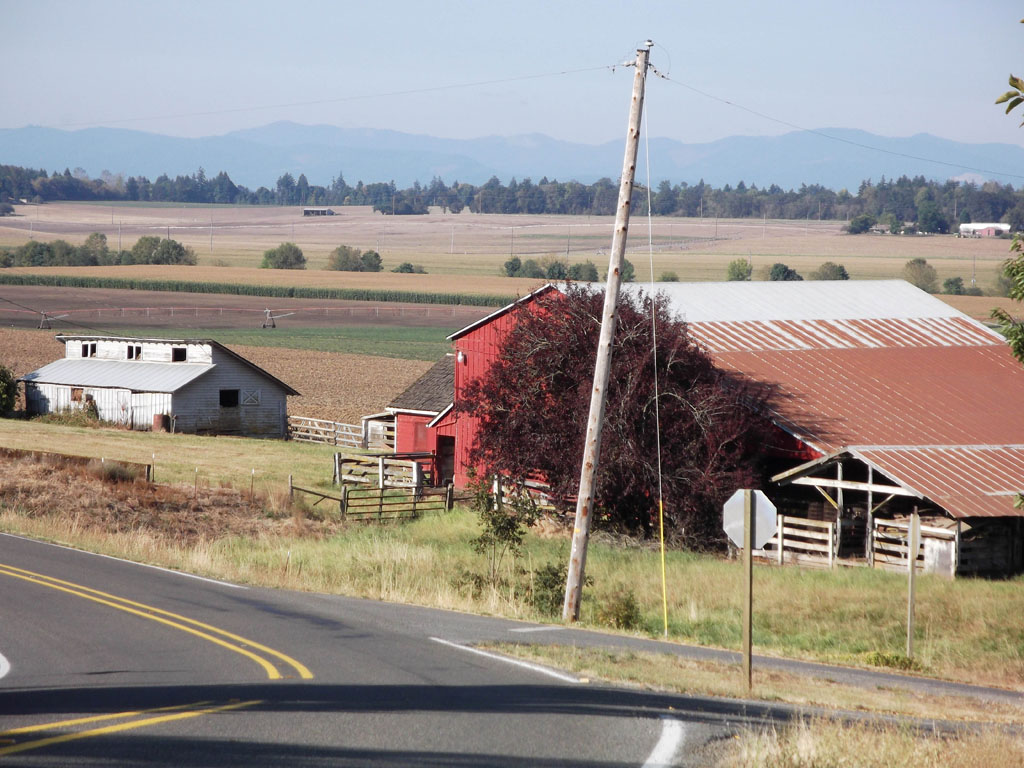 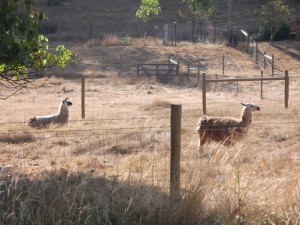 Then there were more hills. One right after another. And these weren’t sissy little hills, these were challenging. I just looked down, pedaled the best I could and refused to give up. I was not going to walk up any of those hills! 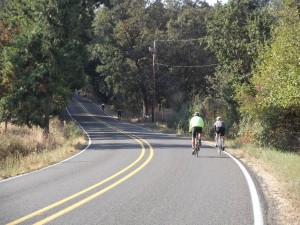 Once I got to the top of both of them, I rested for a few moments and let my heart rate get back to the non-exploding bpm! Luckily, it was downhill on the other side of the hill! Michael was waiting for me at the top. 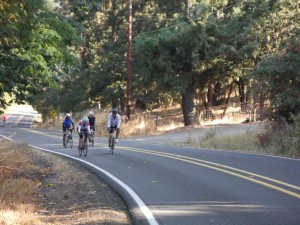 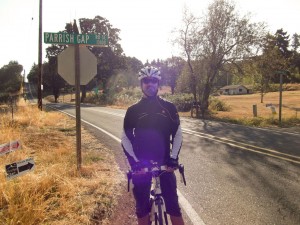 After the last big hill it was a nice downhill descent. Coasting! YAY! Once we got to the bottom of the hill, we were at the first rest stop at mile 22.5 in Jefferson, Oregon. The spread was fantastic! I was really impressed with the excellent support for the event. It was hosted by the Salem Bicycle Club and they just did an awesome job. 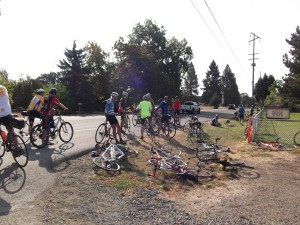 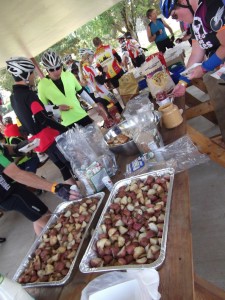 The first rest stop was perfect timing, too, because I was famished! I’d been snacking on dried apricots but that just wasn’t enough. The spread was great! They had roasted red potatoes, lots and lots of muffins, cookies, biscuits, bread for sandwiches, peanut butter, a ton of fruit, bagels and trail mix. I was really impressed with the food at this event. It was the best out of all the events I’ve done so far. 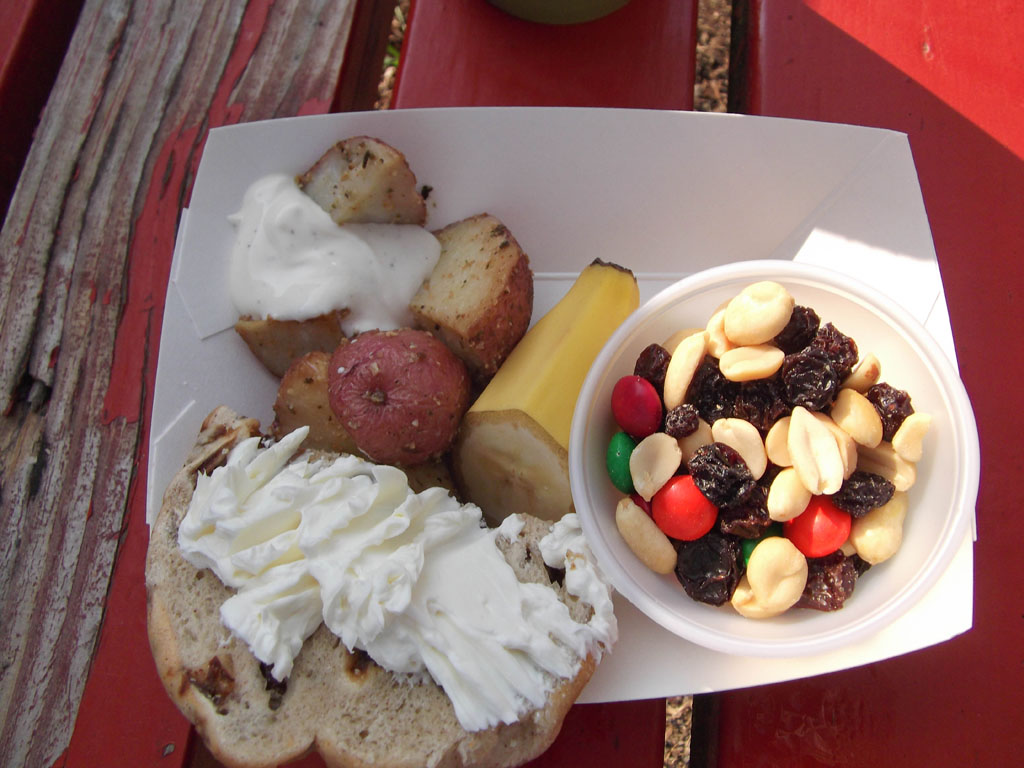 YUM! FEED ME. I had 1/4 of a bagel with cream cheese, a few potatoes with ranch dressing, 1/4 of a banana and a bunch of trail mix. It was perfect. It really hit the spot and got me through the next part of the ride. 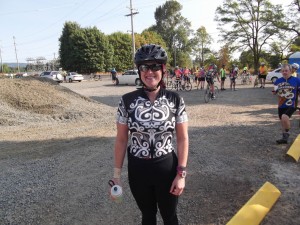 Check out my new cycling jersey! It was great. The only thing I didn’t like was the pockets. They were a bit small. It was finally too warm for cycling tights so I took those off and ended up wrapping the pant legs around my waist like a jacket because the tights just didn’t fit in my jersey. I felt so much better shedding layers. It had warmed up nicely and felt like a hot summer day. Poor Michael only had his long-sleeved jersey. 🙁

We refilled our water bottles and set out for the second leg of our journey. The hardest part of the ride. To be concluded shortly!

QUESTION: What are your favorite “fuel” foods on long rides or runs? What works best for you?