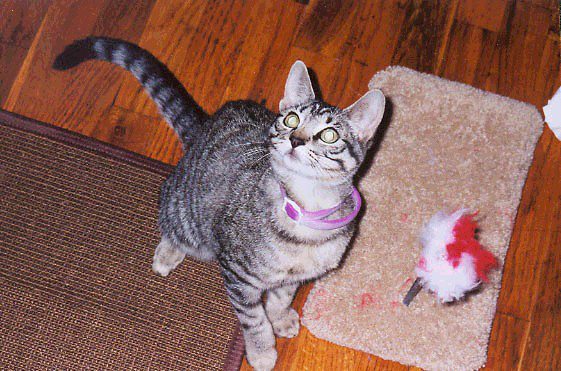 This is my first baby. His name is Yggdrasil. He’s been known as Fat Kitty here on the blog. I wanted to share his story and tell you guys what’s been going on in our world the last few weeks.

I got him as a kitten 15 years ago. I’d never had a pet before and when I moved out on my own after a bad breakup, I decided I wanted a cat. This was before the internet was really a big thing and I went through the newspaper ad section for people giving away kittens. I picked up the phone and started calling.

It was probably the fourth ad I called. No one else picked up the phone, or the kittens were given away already. The fourth person I called said they had a kitten named Gizmo they were giving away. I drove out to their apartment to meet him.

I had no intention of getting a cat yet. I wanted to meet him and see how I felt. So as a result, I had nothing–no litter box, no travel carrier, no food, nothing.

I met “Gizmo” and immediately fell in love. He was this tiny little kitten with so much spunk and energy: 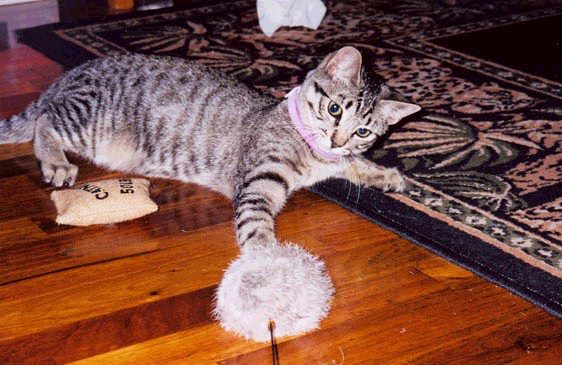 The woman giving him away had rescued him. He was homeless on the street and saw some kids abusing him with rocks and sticks. She rescued him but couldn’t keep him. I knew immediately that he was my cat.

I took him home after just a few minutes of meeting him. I put him in the car and he ran around smelling and looking at everything. He loved the car and actually got up and looked out the windows like a dog.

On the way home I stopped at Target and bought litter, a litter box, toys, food, a carrier, and a scratching post. Then we went home to get acquainted.

His new name was Yggdrasil. (Drazzle) 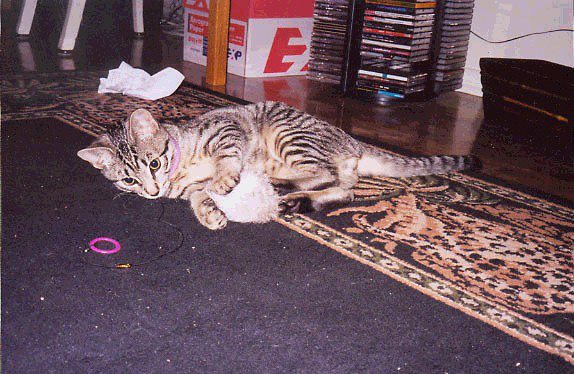 Our first night together was rough. In the middle of the night he managed to knock over a giant (and very heavy) planter of lilies I had on a bookcase. It broke and shattered everywhere. I decided to put him in the bathroom with his litter box for the night because I thought it would be safer.

I got up to use the bathroom early that morning to find that he had managed to escape out the window in the bathroom! He had pushed the screen and slithered out! I was SO DISTRAUGHT! I panicked. I went outside in the dark and searched everywhere for him with a flashlight.

I was sobbing. I couldn’t believe he was gone! I imagined him lost and scared or hurt. I lived right by a freeway and a really busy street and I knew that was dangerous.

I left the front door open and put a bowl of cat food just inside the door hoping he’d come back. I laid down on my bed and cried. All of a sudden I felt a little wet nose on my hand. He had come back! And jumped on the bed and gave me little kitten kisses. I was so overjoyed that he was ok!

That was our first day/night together.

The next few months were great. Yggdrasil was the most playful, active, sweet kitten I’d ever met. He loved me fiercely and I loved him back. The only problem? While I was at work he destroyed my apartment. He got into everything! He was probably bored, or lonely, and just destroyed stuff. I’d come home to all my books on the floor, the garbage overturned…you name it.

I realized he needed a playmate. 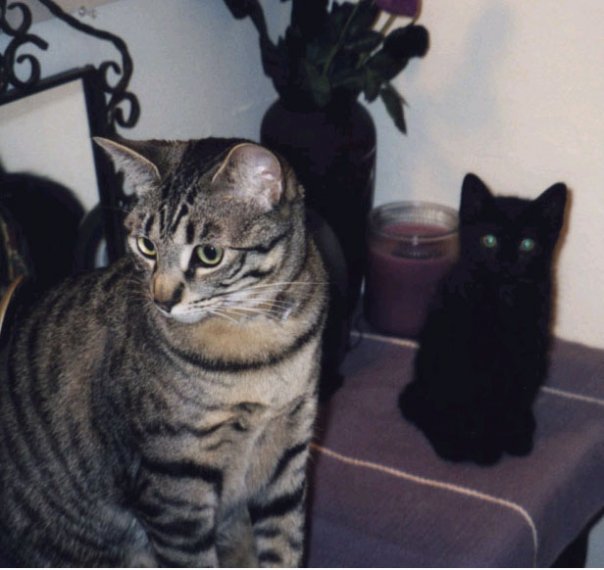 A coworker’s cat had kittens recently and I decided a playmate was exactly what Yggdrasil needed. I met the kittens and picked the runt of the litter. I brought her home (a little too early, I think) at 7 weeks old and introduced Maya to Yggdrasil.

The first two weeks were brutal. He was not happy. I honestly thought he might kill her. 🙁 So much growling and hissing! I have a scar on my leg from their first meeting! I kept them separated for about a week. I wasn’t quite sure I’d be able to keep Maya.

But one day I came home from work to find them snuggled up together on my chair, grooming each other. And it was sealed. They loved each other. I was so happy! They kept each other company, they cuddled, they played, Yggdrasil stopped destroying my apartment…. 🙂 And he got really fat because he ate all of Maya’s kitten food! 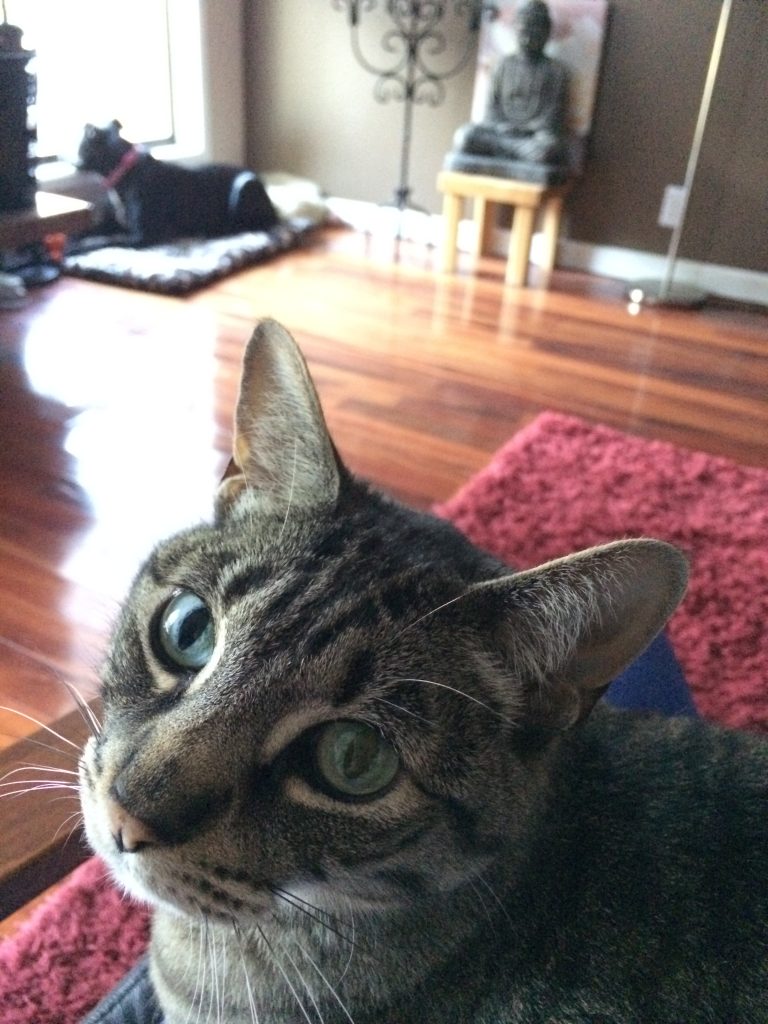 This is how I used to read books: 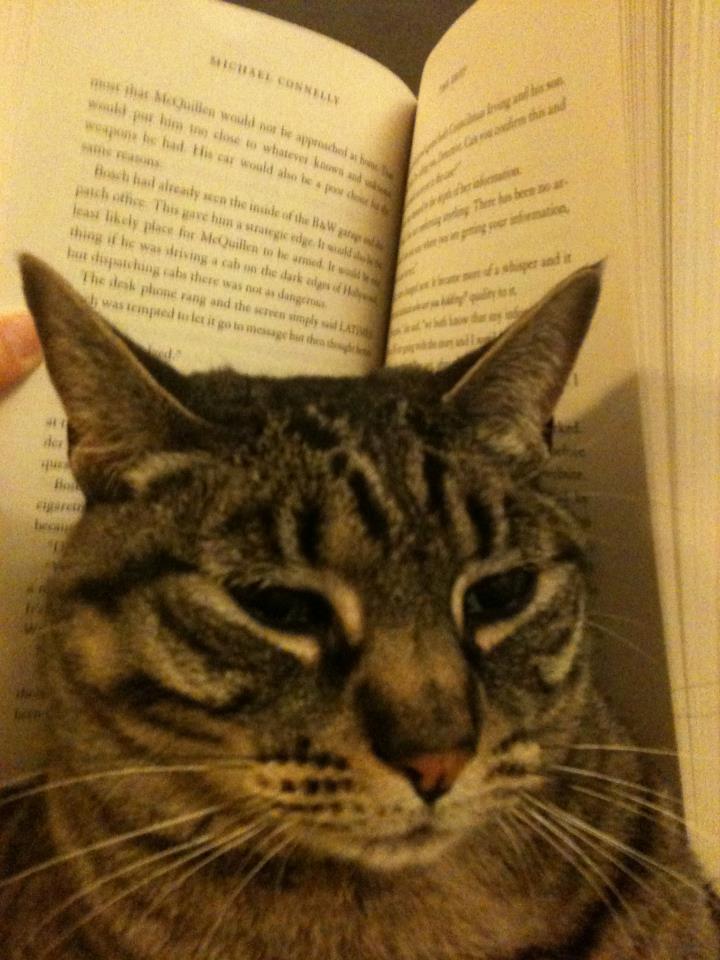 And whenever I’d come home from work or the gym, he’d be waiting for me in the window: 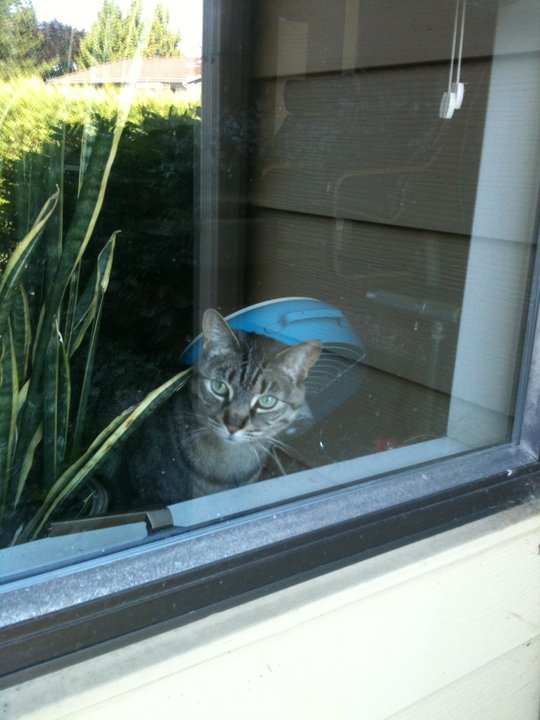 These two are always together: 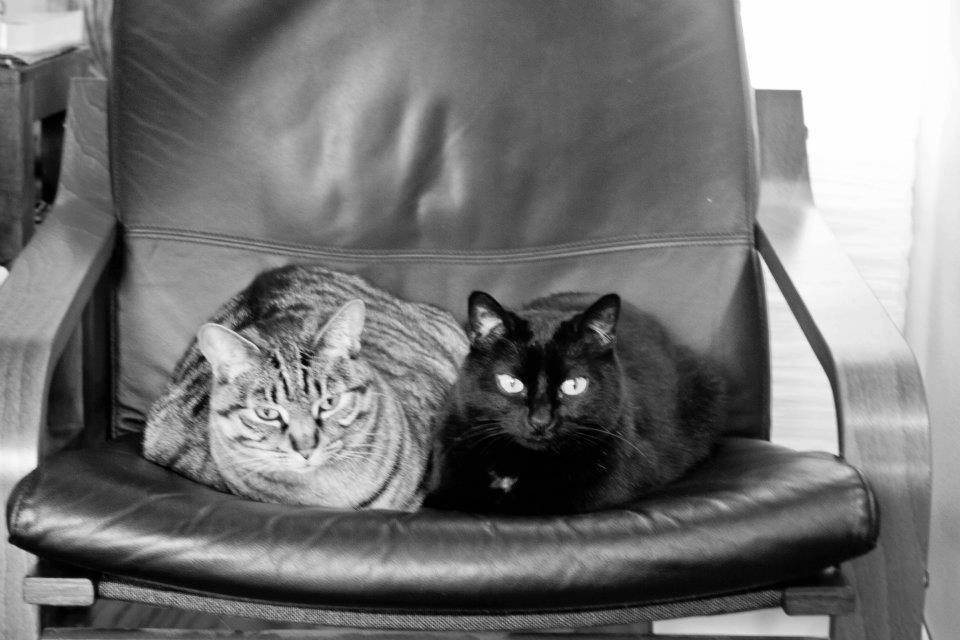 When we brought Bella home a few years ago, Yggdrasil wasn’t too happy. It was a very long road before he finally got over it. And then last year when I was pregnant it was like these two bonded over it and they even started sleeping next to each other and cuddling a little bit: 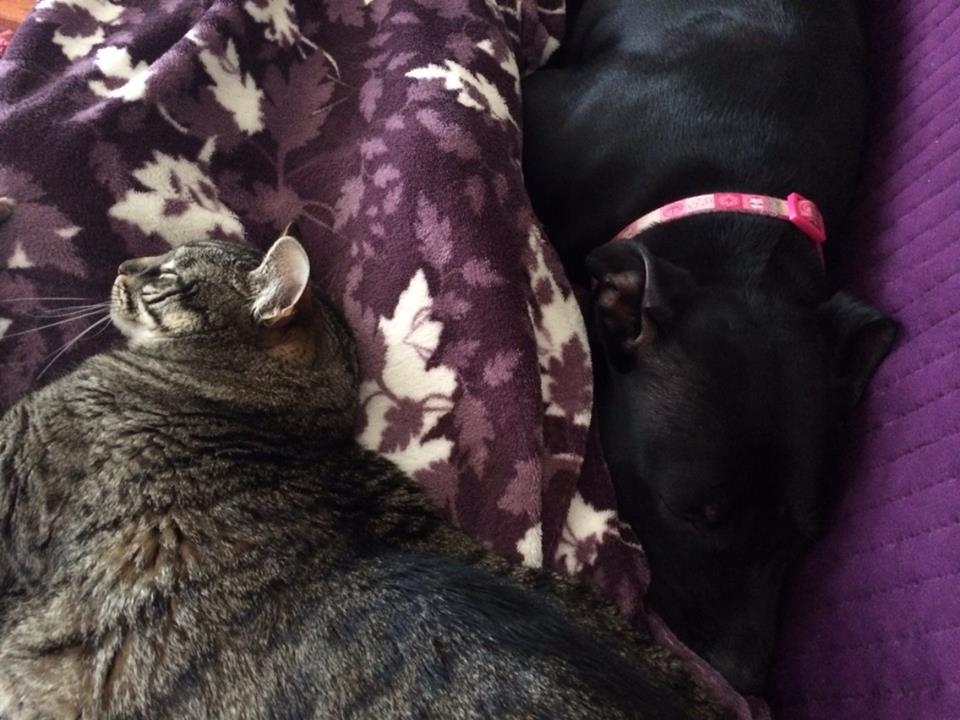 I was glad he got over the new addition(s) because at 14 years old he was finally no longer a kitten (he acted like one until last year) and was kind of turning into a grumpy old man. 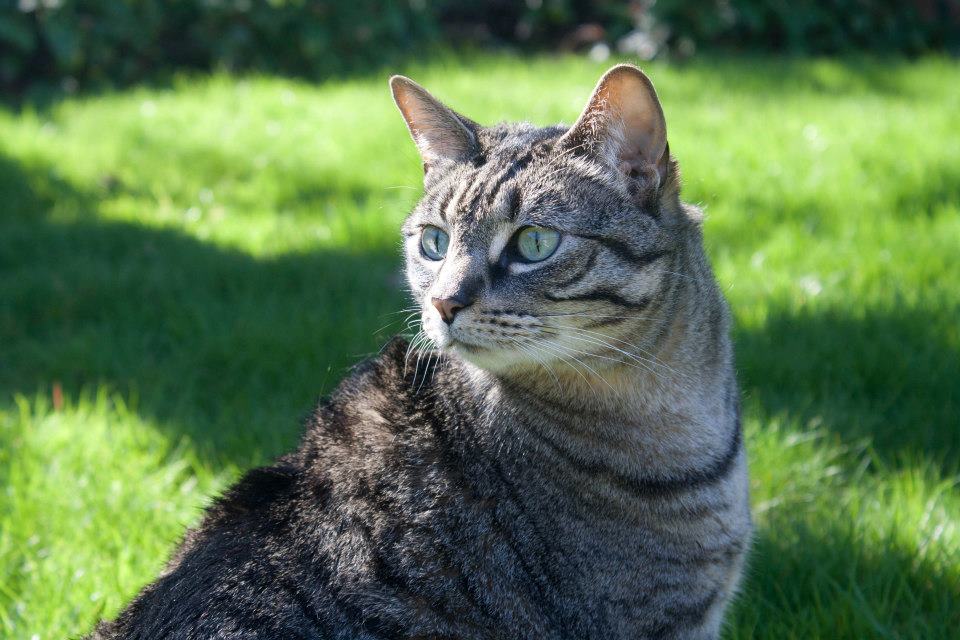 Yggdrasil was always a little plump. Several times the vet told me he needed to lose some weight and I tried a lot of different things, nothing really worked. I did get a special feeder a few years ago that did work well and we’ve been using it since. 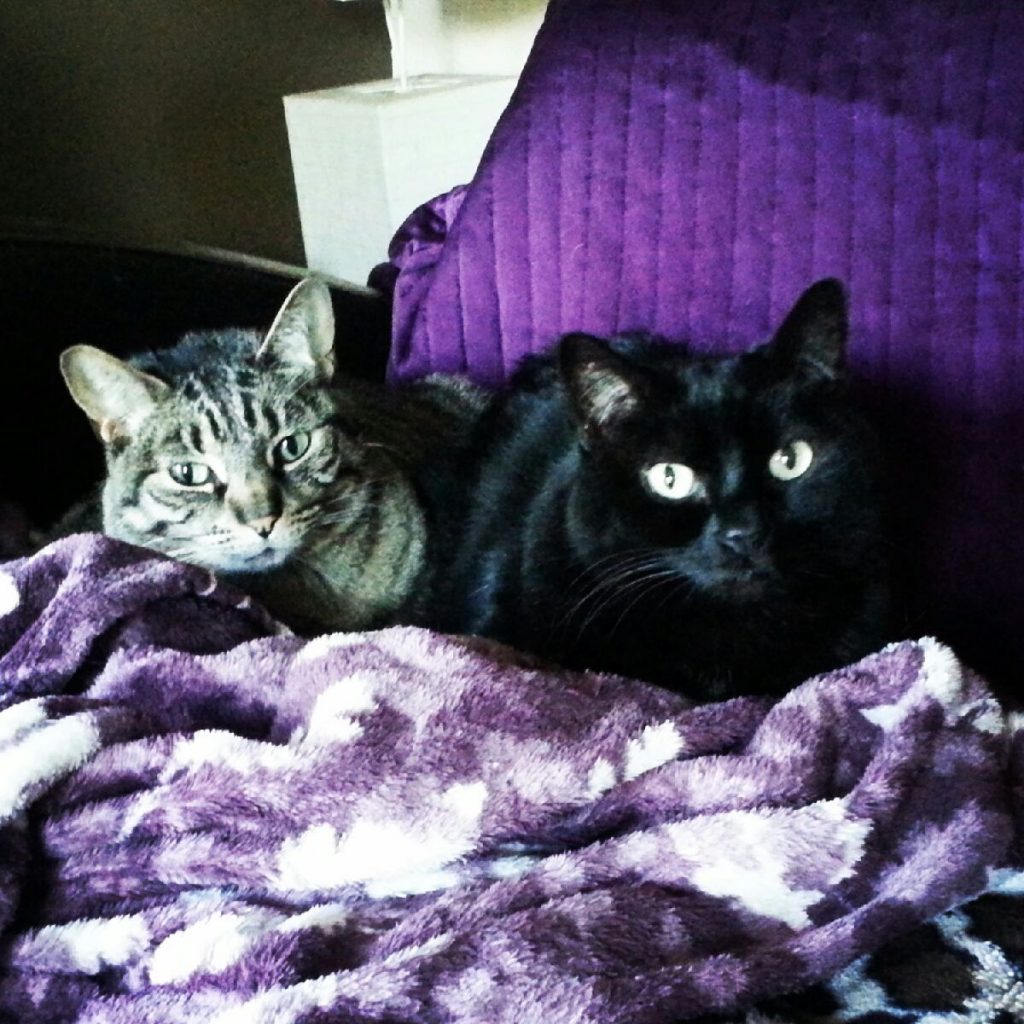 The last few years Yggdrasil has had some health issues, but nothing major. His kidney levels were a little elevated, so I got special prescription food that helped that. He’s also had issues for most of his life with throwing up. Part of that is that he’s always been a binge eater. I think it stems from being homeless as a kitten and not knowing if he’d have food. He just never shook that fear, I think. So he scarfs down his food and it upsets his stomach so he throws up.

The vomiting started to increase this past year. I saw the vet a few times and we tried different food. We got some liquid antacids that I give him once or twice a day to help. That helped a little bit.

At his last vet appointment in November we switched the food again because the vomiting was getting a little worse. The doctor wanted to run some blood work after a few days of trying that. I put it off. Part of the reason was scheduling, we were constantly sick and everything got put off, and the bigger part was denial. I didn’t want to know. I didn’t want to get bad news. I just couldn’t deal with it. 🙁 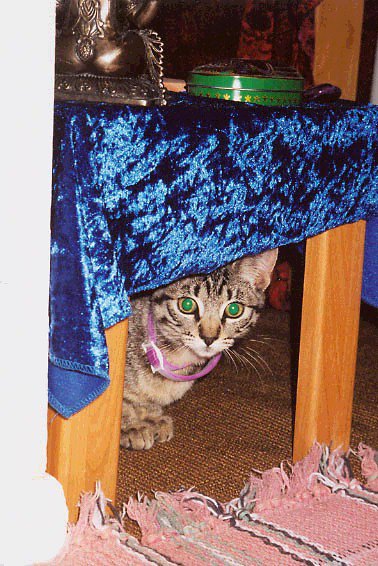 Recently I’ve noticed that he’s lost more weight. My Fat Kitty was no longer fat. He was noticeably skinnier and that was upsetting to me. I took him in to the vet for blood work. It came back normal, which was good I guess…It wasn’t his kidneys. But the vet said the only other thing she could think to explain his recent lack of appetite, vomiting and weight loss was cancer. 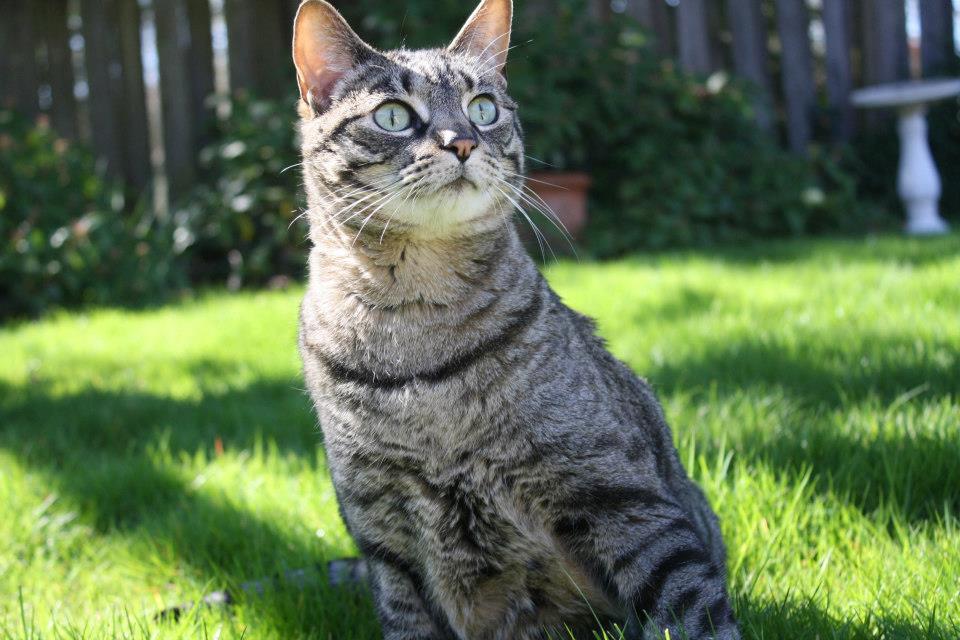 My heart split in two. Yggdrasil was my first baby. I loved him more than anything for a decade and a half. I couldn’t imagine something serious being wrong with him.

The next step was to schedule an ultrasound and x-ray to see if there was something wrong. This happened the week of my birthday. I sunk into a very deep sadness and grief, imagining the worst. It was breaking my heart and he was all I could think about. 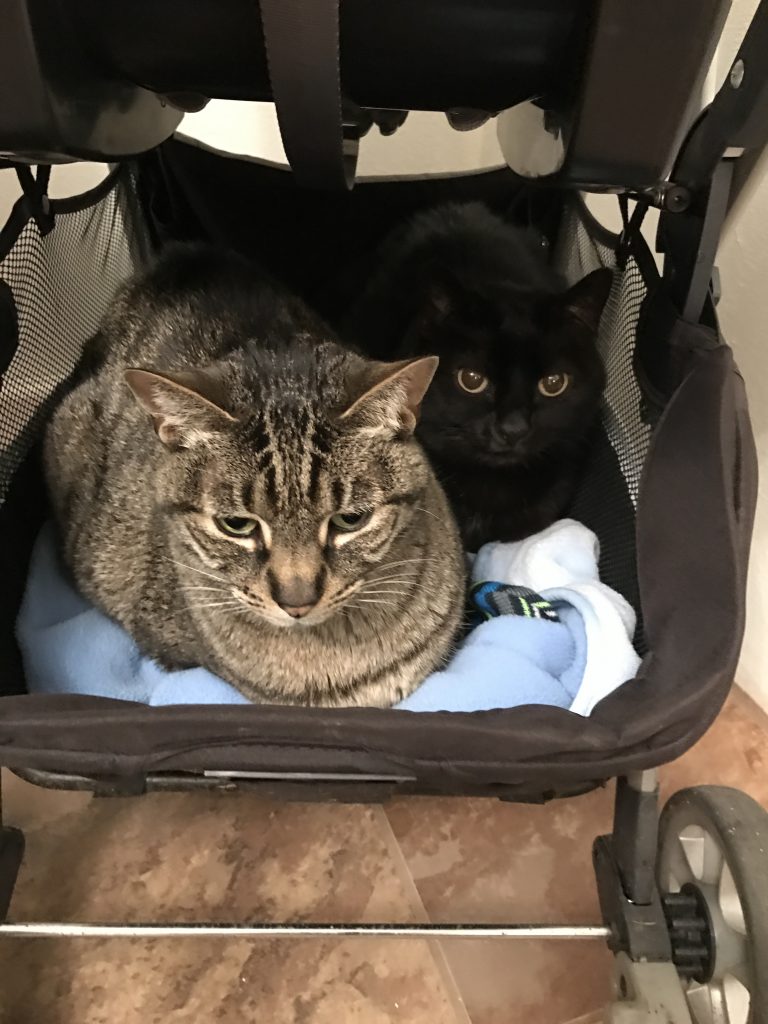 A week later I got the news of the ultrasound and tests. Thankfully it wasn’t cancer. Unfortunately it was pancreatitis. The treatment for that is often steroids and because he has a slight heart murmur, that might not be an option.

The vet felt like his pancreatitis was “mild” enough that we could skip the steroids. She also felt like he might have inflammatory bowel disease. These two illnesses are probably going to be chronic and flare up occasionally. Having a diagnosis is good and I’m glad I spent the money on the tests to find out. It’s better than just assuming it was the worst (cancer) and not enjoying whatever time we have left together dreading the inevitable. I’m hoping that we can manage these illnesses and have a few more years together! 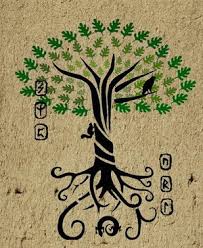