Recently at my physical therapy appointment my doctor gave me some new exercises and also gave me some progressions for exercises I was already doing to heal my back. My goal with PT was to fix my back pain, but more importantly to get back to the activities I love (biking, running, yoga, kettlebells). My therapist said that if you want to run, you should be doing a few specific exercises on a frequent basis.

Want to be a runner and not have to deal with frequent/chronic injury? She said you should be doing the glute bridge exercise and be able to hold a plank for 60 seconds. And maintain those goals. Both exercises will keep your core strong and stabilize your hips during running; in turn it will keep Runner’s Knee and low back pain away. Sold. Sign me up!

I wanted to share what I am currently doing to improve my body. So far the exercises seem to be helping a lot!

The glute bridge exercise might sound familiar to you. It’s a yoga move and common in PT. There are so many benefits to this exercise but the biggest one for me is that stronger glutes fix my runner’s knee. Period. It also helps stabilize your core and helps alleviate low back pain. I’ve been given this exercise before but in the past, even though I did it diligently, I never really felt a difference. I mentioned that to my therapist and she suggested this variation: 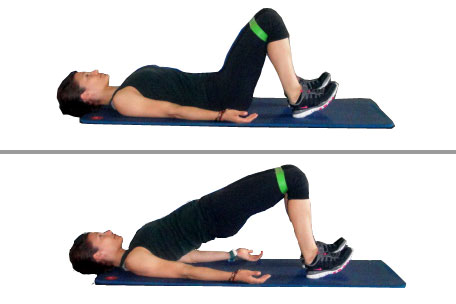 One simple change– doing it on your heels instead of with your feet flat– made a HUGE difference for me. Suddenly I FELT the exercise in my butt and glutes when I did it this way. This is now the only way I do it. And I feel it after I’m done, too. It’s important to engage your core, tighten your glutes and hold them as you go up and down. If not, you’re not getting the same benefits. I love this move. I feel it the next day! I also found a website with examples of other variations I may try in the future.

This is a variation of the basic glute bridges the physical therapist is having me do. It’s supposed to be harder than the traditional way, and it is! Here is a short video of the demonstration. 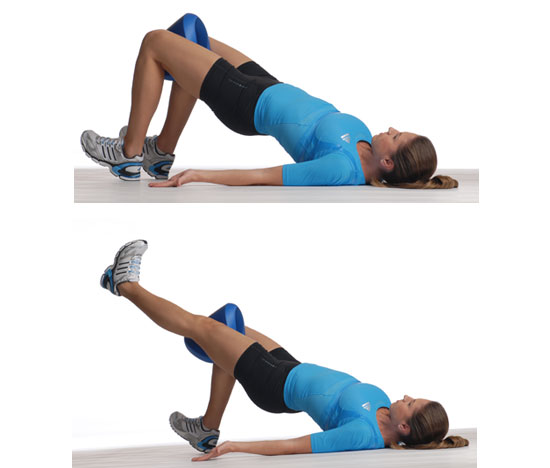 Like the regular glute bridge, do it on your heel. When I first tried it at physical therapy I was like, Oh holy moly this is a LOT harder. I sure did feel it! My doc said the leg doesn’t need to be straight out (like the above picture), just raised. The important keys: do it on your heels, engage your pelvic floor while you do it, and then make sure your hips are staying level as you raise them. If you’re twisting the raised hip, you’re not getting the benefits. And probably messing up the low back.

I’ve written about this move before. It’s a must for me when I want to keep Runner’s Knee away from my life. It was a regular part of my weight lifting workout for a long time. When I had my back flare up I stopped doing this move (and most weight lifting) and it didn’t take long for my knees to start to act up. 🙁

When my therapist watched me do this exercise the one correction she made was to have me hold the weight (or kettlebell) in one hand instead of holding two. Then put the free hand on the small of your back as you bend over. This helps you to make sure you aren’t raising/twisting your hip as you bend. I was! Granted I usually do the move in front of a mirror to make sure I don’t twist, but it’s easy to twist and then there’s no point in the exercise because you putting strain on your lower back. Good to know! 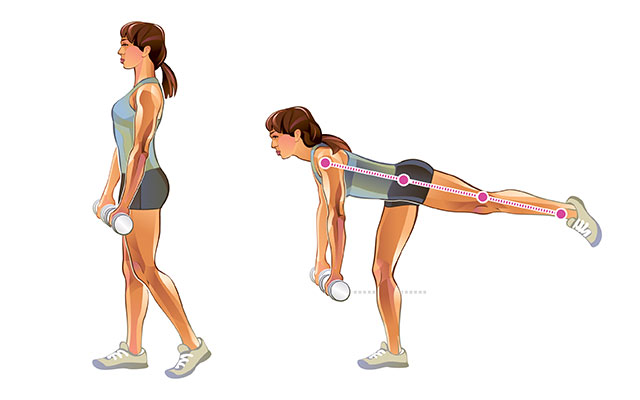 I know, I know, love/hate relationship right? Planks suck. They are hard. But when you finish doing them you feel accomplished! My therapist suggested doing the plank on the elbows instead of hands (it will be harder that way) and to make sure that you are engaging your core muscles while you hold it otherwise you are putting pressure on your low back. Especially if your back is sagging in any way. I see that a lot in the gym–people doing a plank (side plank, traditional etc) and they are sagging. Do it in front of a mirror if necessary to hold it! 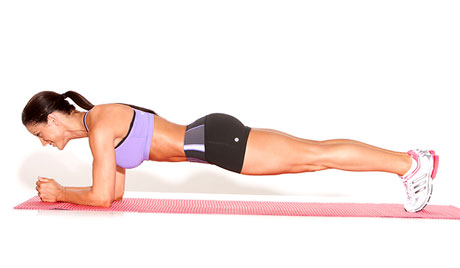 This exercise is one I’ve been given for pretty much every running injury I’ve gotten. This move is supposed to help strengthen your hips. I didn’t always like it because I never really “felt” it. I tried it with a stretchy rubber PT band and that helped a LITTLE bit…but still, didn’t really feel it when I did the exercise. Recently my therapist suggested I try a different way to do it. I hope I can describe it properly…

So same position as the photo below (minus the band). Except instead of having the knees and feet touching, she had me raise the higher leg so it was parallel to the leg resting on the floor and THEN do the clam move. So the legs aren’t actually touching as you do the move, but you’re still doing the same form. If that makes sense? Okay, if it does, good. Because this variation was much better! I could feel the exercise doing it this way.

So far it’s been working. I think the combination of the standing desk and doing the PT exercises during my workouts on a regular basis have helped my back AND my knees! I also started doing the cobra/up-dog yoga stretch after each set of kettlebell swings. It helps a lot!