Every once in awhile, I read something in the news that hits home and reminds me how important safety is. It’s easy to go about the day without giving it much thought. Over the last few months there have been a few incidents on the Springwater Trail here in Portland. The most recent was that a woman was pushed off her bike by a strange man:

“My wife was pushed off of her bike on spring water east of Powell Butte. Around 8:30 PM 8/6/12. Thought the community should know. She was not robbed. She got back on her bike and rode off. Two white males in t-shirts and jeans.”

I’m glad she was okay and not assaulted or robbed. It’s scary because I bike the Springwater all the time. I told myself I shouldn’t be worried because she was biking at night–something I never do–but that doesn’t mean I shouldn’t be more cautious when I’m out by myself.

A lot of the safety tips are common sense things. For example, if you get a flat tire out on your bike, pull over somewhere that looks safe with people around and not a dark alley.  Biking at night is not for me. It’s not safe and I avoid it. Sometimes people can’t avoid riding at night because it’s their only form of transportation. Have a good, bright light on your bike and be safe!

The following are some more tips that I’ve been told or discovered along the way.

Something that sticks with me in regards to cycling safety is a tip that Michael shared with me. He told me that we should have the lightest bike we can afford and the heaviest bike pump we can find. Why? Because a bike pump can be used as a weapon if need be. Every once in awhile, Michael reminds me to “always take your bike pump” on rides. Not just for flat tires, but self-defense. It’s a good trick and there have been a few times where I rode by some sketchy people on the Springwater and I was glad I had my bike pump just in case. Another reason: dogs. Luckily this hasn’t happened to me, but some cyclist friends have told me stories of dogs chasing them and trying to bite them. Bike pump.

A few years ago I finally made the transition to clip-in cycling shoes. When I was shopping for them I knew I wanted mountain biking shoes. Sure they were heavier and bigger, but they were also shoes I could walk in. At the time, it was because I wanted to be able to walk in my cycling shoes in case I got a flat tire. 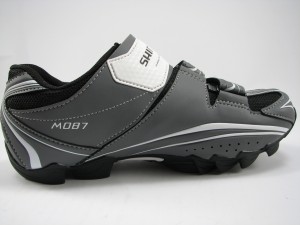 But shoes like these are also something I can RUN in if I need to. The other kind of cycling shoes are smooth and flat on the bottom and so slick I can barely walk, let alone run.

I bought some runner’s pepper spray awhile ago and I have no idea why it didn’t occur to me to also carry it on my bike. Just in case.

Updated to add: If you work somewhere it might be an issue, be sure to talk to your boss about carrying pepper spray on you.

The line of work I’m in makes me cynical, hyper aware at all times and suspicious of strangers on the street. Sad, but true. Because of this, I am always aware of what’s going on around me. I look around, I pay attention to people around me, I try not to listen to my headphones too loudly when I’m out walking or running.

Tell people where you are biking and how long you expect to be gone. Same goes for all activities you do alone–hiking, running, etc. It’s just a good idea.

Don’t ride near sketchy people. Easier said than done sometimes. There are parts of the Springwater Trail that are the places the Portland homeless camp. I’ve never had an issue with someone on the trail but you just never know.  I do my best to bike through these areas as fast as my legs will take me.

It’s funny, I’ll bike on the Springwater trail alone, but I would never ever run there by myself. A lot of my friends feel the same way.

My goal for this post was not to scare people or be super paranoid, but it’s something to think about. Practicing safe biking and running habits is always a good idea, even if the area you are in is safe.

QUESTION: What are your safety tips?

If you are prone to sports injuries, there are two activities I’d suggest for you. The first would be swimming. It’s always my suggestion for people who want to lose weight but have issues (joints, knee injuries, back pain, etc) but I’m biased because I love swimming. The other alternative is cycling. Cycling is a very body-friendly activity and a good way to get fit without getting hurt.

Like most young people, I thought I was invincible. I started running with no training plans other than listening to my body and doing what I thought I could do. I made a lot of mistakes in the beginning, but luckily had no injuries. I had a bout of bursitis in my ankle, sacrum strain and some very sore muscles, but nothing awful. But I realize now that I made the common rookie mistake: doing too many miles, too soon.  (Read 8 Mistakes I Made While Injured)

With cycling, though, the injuries are fairly limited as long as we do a few things right.  (Read Bike Buying Mistakes) Obviously follow the rules of the road, pay attention to cars around you, wear a HELMET at all times on the bike, and wear reflective clothing. Continue reading for more tips. 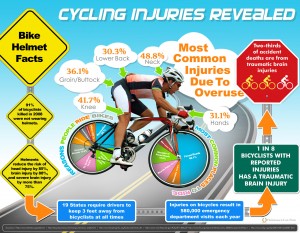 The first thing is crucial: get a proper bike fitting. Don’t ride a bike that isn’t right for your body. You’ll regret it (and so will your lower back) if you don’t get fitted!

Strengthen your core. Strength training is so crucial and I noticed that when I spent a good amount of time weight training that all my other sports improved tremendously. Balance in the body is key! A strong core will make those long bike rides much easier, more comfortable and you won’t be sore afterward.

Another common injury is saddle sores. I never really had this issue, even as a newbie rider, but I did have soreness. The tip to overcome this: good cycling shorts. They also make creams to put on your nether-regions before biking long miles to prevent chafing. It’s uncomfortable but they work.

The other body issues that can come up are really about tension. Is your neck and shoulders sore the day after a ride? Check your posture on the bike. Are your toes going numb? Maybe your shoes are too tight, or you need to wiggle your toes periodically while riding. Are your hands and wrists hurting? Maybe you’re gripping the handle bars too tightly. Just being aware of your body while riding can help a lot of issues.

Just like with running, you don’t want to do too many miles too soon. A friend of mine who has started biking recently asked me about the “cycling marathons” I do. 🙂 I had to laugh at that terminology. It reminded me that maybe not everyone knows that a Century means 100 miles on the bike! My friend wanted to do a Century with her friend and when I told her that meant 100 miles she was like…um, no thanks! You don’t go from biking once in awhile to completing 100 miles!

When I first started commuting to work, I did part of the route. It ended up being about 11 miles roundtrip to and from work. That was a good starting point. As I got better, as I got more comfortable and more confident on the bike, I tried biking the full route–22 miles roundtrip. It took some time. I’m glad I took it slowly and built my endurance up. This year I didn’t need to do that because I spent all winter in spin class!

Just to give you an example of a few week’s worth of mileage, here is a weekly example:

If you follow some of these tips, I think you’ll be much happier on the bike and your body will thank you!

QUESTION: What are some of your “body aches” after cycling?