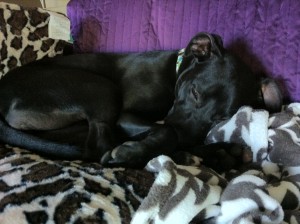 I’m so proud of Bella! And of me, too, honestly.

I got up at 6am and went for a run. It was pitch-black outside; I couldn’t even see the moon. It wasn’t even 40 degrees out. I am so not a morning person and as I laid in my warm bed in the dark with my kitty purring next to me, I contemplated skipping it. But I got my tired butt out of bed and did it.

This was Bella’s first run. I had reservations. She’s still learning how to walk properly on a leash and not pull (the face harness helps but hasn’t fixed the issue). Bella is also really fast and I worried that once she started running I’d struggle to keep up with her. The potential for injury was high.

It was a lot darker than I was expecting it to be. I also planned on going to the nearby track to run but the lights were off so I stuck to the streets that had lights. It was too dark to run anywhere else.

Bella and I set off and I warmed up fairly quickly. I was wearing layers and that helped. The cold air kind of hurt my lungs and that was not fun! But I am so glad I got out there and went for a run! 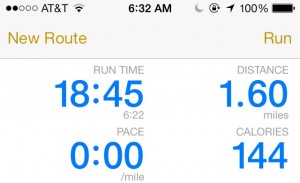 I didn’t have a ton of time to devote to the run but something was better than nothing! We got back to the house and I gave Bella breakfast. She seemed really happy that she got to run. Hopefully that helps her being in the crate while I am at work. 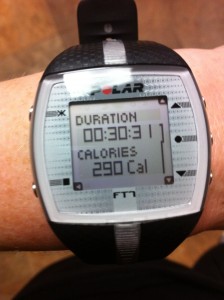 Depending on weather, I will try and go for a run with her once a week. I will definitely be switching that run to after work, though! It was not fun running in the dark and cold. I did it because I had to pick Michael up from the airport after work.

We went out to dinner at The Gilt Club because I had a soon expiring Groupon and I wanted to catch up about his trip and tell him about our week. I started with my favorite drink from The Gilt Club — Tracy’s First Kiss. It’s vodka, cucumber, lime and basil. Love it! 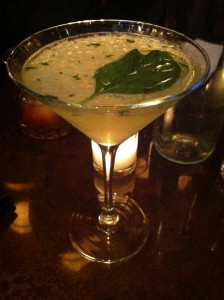 I love The Gilt Club. It’s such a cool vibe in there. They play trippy trance music and the low lighting and red leather booths and red walls make it very intimate and romantic. So in the spirit of romance, we got an appetizer of pork rinds. 🙂 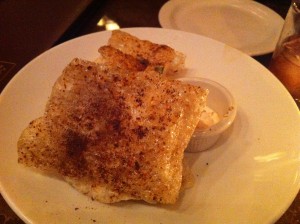 I’ve never had pork rinds before. They were odd. They were kind of like eating those popcorn bubble things you use to pack breakable things. I also felt like they were way too salty. So I wasn’t a fan. Michael ordered a burger for dinner and I got the gnocchi with tomatoes, sage and spicy sausage. 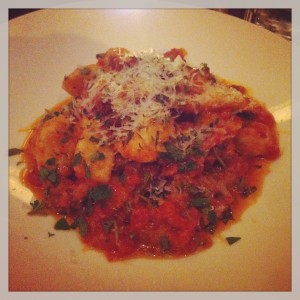 My dish was amazing! The gnocchi was homemade and perfectly soft. The sausage was spicy and had a little crunch to it. Before I knew it the dish was gone and I wanted more and more.

After dinner we went home and Bella was SO excited to see Michael! I wondered if she’d remember him or bark and freak out, but she didn’t. She remembered him and was ecstatic to see him. She ran down the hallway, slipping and sliding like a cartoon dog on the hardwood floors and then hopped up and down like a bunny. It was so adorable; I should have filmed it. 🙂

QUESTION: Are you a runner with a dog? Any tips? 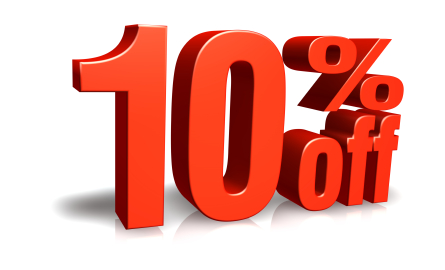 There’s a rule in the running and cycling world called the 10% Rule. If you haven’t heard of it, you can read more here.  The short version is that it’s a good rule for athletes or anyone new to exercising to abide by to prevent injuries. “This guideline simply states that you should increase your activity no more than 10 percent per week. That includes distance, intensity, weight lifted and time of exercise.”

It’s a good rule to follow, even if you don’t think you need to follow it! As a general rule, I tried to abide by this but I wasn’t always perfect. I think in my case I have the tendency to think that my abilities remain at the same level even if I take some time off. A good example of this is biking. Last winter I went to spin class once a week to keep some kind of base going to make the return to biking easier. It was a good thing but doing 15 miles a week in a spin class is totally not the same as biking outside. I was smart and didn’t attempt to ride to work from home (25 miles round trip) until I thought I was ready. That meant I biked from the half-way point for a few weeks and then decided I was good. It went alright last year.

This year it was not quite as successful. Not only have I NOT gone to spin class at all this winter, but I really wasn’t biking at all the gym either AND I’d been dealing with an injury for months. About a month ago I rode my bike to the gym and back and was ecstatic that there were no issues. It was only about 5 miles roundtrip. A week later I thought I could bike to work. I totally wasn’t thinking about the 10% rule and dismissed the fact that I’d been injured all winter long. I did 11 miles roundtrip which is DUH like 50% increase instead of 10%. Ooooooops…

Totally dumb and totally probably the reason I’m in the state I’m in now.

I see so many mistakes out there like that. I follow a bunch of runners on Twitter and there was one that had a stress fracture and couldn’t run for 6 weeks. That person immediately went out and ran 10 miles for their first run after 6 weeks off! I cringed as I read that tweet and crossed my fingers that they would be ok.

I know I’m not alone in this dilemma. You feel good, you want to push yourself, you think you can handle it…and then you get a setback. What I should have done was gone for a 6 mile bike ride that next week and then the week after 7 or 8 miles…and then eventually I’d be up to the 11 miles I had fast forwarded to.

When I saw my knee specialist he reiterated the importance of the 10% rule and gave me specific instructions on how to follow it.

Week 7 – start from the beginning. This means I will probably get on the spin bike at the gym and do 5 minutes with very little resistance.

And so on, and so on. I can do that. I think. I’m going to try to, anyway. In the meantime, I’m applying the same rule to the other activities I’m doing. I tend to be “GO FULL SPEED” intense in everything I do. If there’s something I like to do, there’s no half-assing it, there’s no middle road and I need to learn to stay in that middle road for a little bit longer.

I seem to do really well with the 10% rule when it comes to weight lifting. The perfect example is the triceps kickbacks that I do at the gym. I started with a 5 pound weight. I did that for about 2 weeks and then went up to 8 pounds. The following week I was up to 10 pounds, where I stayed for two weeks. I realized I was just squatting in my comfort zone and I needed to increase the weight again so I went up to 12 and then 15. I’ve been at 17.5 pounds for a few weeks now and will be attempting 20 pounds soon. When I try to use the 20 pound weight, I will decrease the reps from 10 to 7 or so for the first few attempts. Just to see how I do. For some reason I mastered the 10% rule when it comes to weight lifting–but not anything else!

If you’re just starting out with your fitness, START SMALL. Don’t spend an hour doing your first workout session! That won’t be effective and most likely you’ll be too sore to do much else for a week. Work up to it! If you’ve been inactive for a long time and want to start walking, you don’t sign up to walk a half marathon your first day, right? Check out the Couch to 5k Program for a gradual plan.