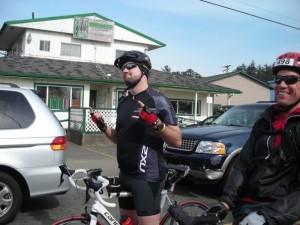 A month or 3 ago, I wrote a series of posts about how to buy a bicycle. Lisa asked me to write a little ditty about how I know about what type of bike you should (and more importantly, should not) buy.

I have never worked in a bike store, or retail sales for that matter. I am simply a person that has purchased the wrong bike before — possibly twice. I may not have sales experience, but I do have wrong bike purchasing experience and I hope to explain where I went wrong so you don’t repeat my mistakes.

My first bike — The 2006 Novara Fusion from REI. This looks JUST like what I wanted. It’s got a rack on the back I can attach bags too so I don’t have to carry a backpack. It’s got lights on the front and the rear to increase my visibility on the road — two on the front even! The bars are flat so I’ll be comfortable while I ride instead of bent over looking like a speed demon, I just want to get to work and back, I’m not trying to set land speed records. Other features included fenders, a kickstand, and nice and big soft saddle. But the thing I liked most about it was the way it looked. I loved the utility look of it including the  colors.

So what’s wrong with this? Well, almost everything really. To start, this bike weighs about 35 lbs. To put that in perspective, my current bike weighs about 20 lbs. Carrying unnecessary weight with you will ultimately make you work harder and enjoy your ride less.

Next up, the fenders. The fenders are nice and really, they’re a worthy  consideration for any bike. But you need to ask yourself if you’re actually going to ride in the rain or not. If the answer is no, then you do not need  fenders. At all, ever. And if you do actually find a puddle randomly that you  have to ride through, you’ll be just fine — unless you’re actually a wicked witch and if you are, you should probably be riding a broom instead of a bike. I  occasionally ride my bike in the rain (or when I know there’s a chance of rain
forecasted) and I do not have fenders on my current bicycle. It’s really not an issue when you have some proper rain gear anyway. I left the fenders on this bike though. They had long metal bars that attached them to the axle and it looked complicated to take them off. Plus, I might ride it in the rain! Note — I never road it in the rain.

What else is wrong with this bike? Not much really, it comes down to preference at this point. I ultimately concluded that I am not much of a fan of the flat handlebars because you cannot ever change the position of your hands which ultimately can lead to fatigue that goes well beyond your hands and arms. Changing your hand position occasionally can relieve pressure/fatigue to your entire body. Because of this, I concluded that I wanted drop style handlebars.

I also realized that I cannot ever go fast or feel nimble on this bike. The wider more versatile wheels coupled with the weight of the bike would always prevent that from happening and while I bought this bike to commute to work, I also wanted to think that I was capable of hauling ass whenever I wanted. In a way, I felt like a speed demon that was being held back by my equipment. This was when I decided to buy a road bike.

This was the 2nd bike I bought — The 2008 Novara Divano again from REI. This looks JUST like what I wanted. An entry level road bike. It’s light and felt both fast and nimble. And it’s red and white, it has to be perfect, right? Not so fast…

There are some things that you cannot fully realize while you’re buying a bike if you’ve not owned one in a long time. In this case, I was unaware of what gears I needed in my bike. Most of us remember phrases like “10-speeds” which referred to bikes with 10 different cogs on their rear cassette and one in the front. Since the invention of these, bicycle manufacturers have also increased the number of cog wheels connected to the crank arms from 1 to as many as 3. This gives you many more gearing options — as many as 30 (3 in the front, 10 in the back). The problem with this for me is that many of these gears were redundant, especially in the middle. It seemed like there were like 8 combinations of front and rear gearing that would produce essentially the same results in efforts and speed. Not only do I not need this, it’s really just adding weight and complication to my bike which makes it harder to ride and more prone to error (ie — throw the chain off the gear).

The second thing that I realized was a problem is that there are a lot of hills on my commute and I have to really hunker down and put out a ton of effort to reach the summit of some of them. With this bike, I heard creaking. Creaking shakes down to power and efficiencies that are lost. And trust me, when you’re riding up a hill, you want that to be as easy as it possibly can.

As I look back upon this purchase, I realize that I bought it largely because I was scared about buying a road bike again and wanted to make a minimal commitment so I bought a beginner’s bike without properly doing my research. This type of bike is fine for many people, myself included, but I got more serious about riding and wanted to get a bike that I could comfortably ride for 4+ hours in a day. For that, you will want a carbon framed bike.

This was the 3rd bike I bought — The 2009 Cannondale Six Carbon 3 from a store that’s been voted the #1 bike retailer in the nation — River City Bikes. When I was approached by a sales person, I told them that I was looking for a bike that I could use for commuting that would also work for occasional Centuries. He showed me a bike with a carbon frame and I was quick to say that I didn’t think I could afford this today. I did not want to spend $2000+ for a bike and that’s where these types of bikes usually start. Well, it turned out to be my lucky day because this $2300 bike was 30% off as it was an older model and they wanted to get it out of the store. I was able to negotiate for an additional 10% off and I left the store with a carbon framed bike. I was blown away with the deal I had gotten.

The frame is fully made of carbon as are the seat posts and front fork. I  replaced the saddle pretty quickly as this one didn’t fit me well. A few months later, I found a killer deal on some carbon handlebars to replace the stem and metal bars. These days, I’m 100% carbon. It’s by far the lightest, stiffest, and most comfortable riding bike I’ve ever owned. These days I’m able to attack many of the hills I encounter comfortably. There are two cog wheels in the front and 10 in the back which produces 20 gears in total. There are only a few combinations that result in duplicate gearing so I feel like I’ve gotten the best gearing options which were available at the time. 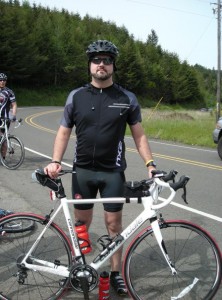 But it’s not all good stuff with this bike, there are some issues. The carbon bars that I upgraded to are too large around to attach a light too. There’s simply not a good workaround for this but it’s also to be expected. I bought top of the line carbon fiber bars that pro-cyclists use for racing. These bars were designed for Mark Cavendish who is currently one of the top sprinters in the world.

Similarly, you cannot attach a rack to a racing bike and you cannot drill holes into it to allow for this. This isn’t a big deal but it pretty much means that I cannot take this bike to the grocery store because of the lack of storage options. Again, it’s a tradeoff that I’m OK with because the joy of riding on a carbon bike greatly outweighs the occasional inconveniences I experience. 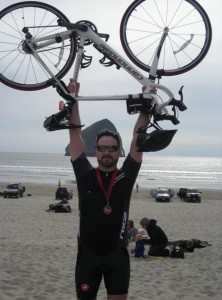 So what’s next? I would like to get a bike that I can take to the grocery store. That would look something like this bike, the Novara Randonee. This isn’t exactly what I want though so it won’t be what I end up buying but I do like the traditional look of the saddle and bar tape. It’s just got far too many gears for my tastes… 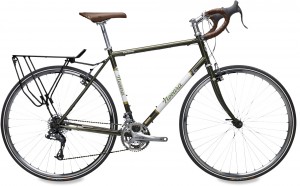 I’ll probably get a bike like this in 2012 so if you see something that looks  sharp, let me know!

Lisa’s Note: As a newbie cyclist, I also made a mistake with my bike purchase. For me it came down to one factor: COST. I was new to cycling and had never owned a road bike. I’d been using my old mountain bike from my childhood, and then I borrowed one of Michael’s old Hybrids for awhile. I was reluctant to spend a lot of money on a bike for a lot of reasons, the main being: I was a runner. I was training for Hood to Coast and my focus was on running. The cycling thing was just something I was doing “for fun” with my boyfriend. Now that I am more serious about it and training for a Century, I regret buying such a heavy bike. My road bike is an entry-level Raleigh that was on clearance. It fit my body and it was in my price range. Now, I notice what a difference extra weight makes. Riding up hills is a chore because my bike weighs so much.

QUESTION: Have you regretted a bike purchase? What bikes are you interested in?