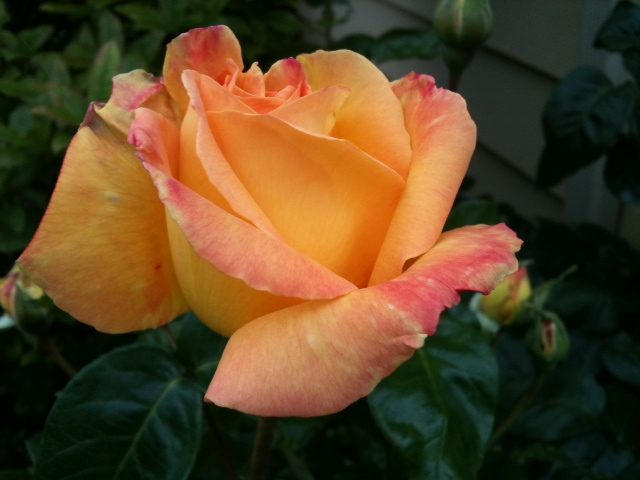 The recent (and fleeting, apparently) heat wave in Portland really sparked some growth in my garden. The roses and Lucifer plants are all blooming:

The roses are always different colors each year. I don’t remember there being an orange rose last year. The yellowish-pink ones are the norm. They look so pretty! On the vegetable front, the lettuce is flourishing! I had to take some into work to share with coworkers because there was just too much all at once.

The acorn squash has flowers and a teeny tiny little squash.

And the zucchini plant has an ACTUAL zucchini! I was thrilled to see this:

If the weather holds up, I think that zucchini will be ready to eat next week. The tomato plants are growing tall and I have tiny green tomatoes but nothing near close to being ripe.

The progress on the yard work has been going swimmingly. It really is satisfying to see progress after hard work. The sweat, blood, blisters and sore muscles were worth it.

I wasn’t prepared for how much WORK a garden would be. I have to admit, I was a bit naive. I thought “we’ll just let it all grow and harvest yummy veggies!” But it takes time, dedication and work. There’s weeding, pest-control, watering, but not over-watering. There’s maintenance and upkeep I hadn’t imagined. So far it’s been worth it.

I also learned that I did everything wrong when I planted it. I planted too much in our raised beds. I had been skeptical that anything would survive the soggy spring so I went overboard. The lettuce plants that looked close to death came back with a vengeance and now the raised beds are too cramped for things to really grow properly. The lettuce is all growing INTO each other. Oops! Lesson learned for next year.

On another front, Michael and I have discussed the Portland Century and now that the route and elevation has been published we have decided to make a change. Instead of doing the full 100 we are going to do the 75 route. The full 100 had too much of an elevation climb for either of our abilities at this point. Part of me is disappointed that I’m not doing the full 100 but honestly I had doubts in my abilities to even do 100! So that’s kind of a relief.

The way I see things happening now: we do the 75 miles in the Portland Century in August and maybe in September or October we try to do a different Century Ride.

QUESTION: How do you keep up with your garden if you have one? Any tips for a newbie? And how do I harvest the zucchini??