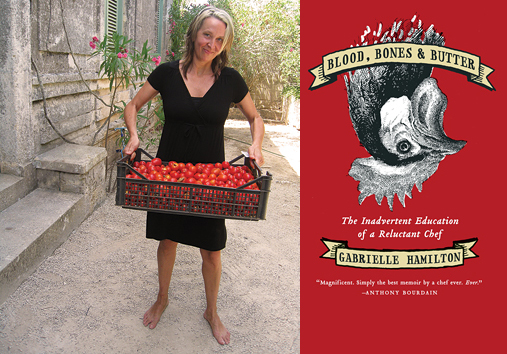 If you’re looking for a really good memoir, I recommend Blood, Bones and Butter by Gabrielle Hamilton. Gabrielle opened the critically acclaimed restaurant in New York, Prune, but the book is about the rocky road she took to get to that success. She writes about her upbringings on a farm in New Jersey with a bunch of siblings and an exotic mother who spent her day cooking.

“She took me to the farm to get our milk. As only a Frenchwoman can — in a heel, a silk scarf, and a cashmere skirt–she’d pull up the long driveway of the dairy farm in her chocolate brown antique Mercedes-Benz, and without a single awkward gesture, get down and fill four rinsed-out gallon plastic jugs with raw milk…That milk was so thick and shitty that the cream separated and rose to the top and we siphoned off three inches from every gallon on milk we brought home. [pg 23]”

I loved her descriptions in the book. It was poetic and vivid and kept me glued to the page. I could picture everything she wrote about like I was watching it in a movie. Her mother was a huge influence on her life and yet the mother wasn’t in the book very much after the beginning. That above quote is an example of her gorgeous writing. Can’t you just picture that woman in the 1960’s? And she goes on to describe her mother who always cooked wearing heels, a dress, and full makeup.

Her parents divorced when she was about 14 and her mother moved to Vermont. Gabrielle started a life of drugs and crime (and even got arrested for larceny in New York). She was 17 when she went to New York on her own with little to no money and became a waitress. This was her entry into the culinary world. She worked as a short order cook, worked as the chef of a rich kids’ summer camp, she was even an assistant chef for a catering company.

She goes on to describe the dark side of wedding catering. The bride and groom go to a private tasting for just the two of them, months in advance. Each ingredient hand-selected by the chef and prepared that day.

“But by the time the bride and groom, now bethrothed, and their three hundred guests were enjoying the same meal on a beautiful June evening, we were now on a very different scale of production. [pg74]”

She describes the large scale production of how thousands of portions are prepared.

“The wedding meal itself, a sit-down dinner for three hundred that followed the butler-ed hors d’oevres hour, had sat in the warehouse kitchen refrigerator, some components of it for days, and then in the back of the cargo van in bumper-to-bumper traffic on the LIE. [pg76]”

Sure does take the magic out of the moment, huh? That’s why wedding cake is so awful–it was prepared probably a week in advance (especially for those opulent ones) and sat in a fridge somewhere drying out. Gross.

At one point she takes off to Europe and bums around, doing odd cooking jobs here and there. She describes her time in Greece where she worked in a restaurant on an Island only known to locals. Her description transported me there and I read with envy her time there:

“I made my home in a little hut I had built on the beach. I showered in the ocean, shat behind the rocks, slept under the stars, and spent those early days in Serifos wandering the mountainside. Chamomile, mint, capers, oregano, thyme, figs, lemons, oranges — these grew so rampantly that when you walked, the herbs crushed underfoot and released their scent into the air. [pg 132]”

“Three months in India, seven months in Turkey, six months in Greece–during which I came to understand the differences and eventually to even have preferences between the milk from a certain wallah in Delhi and one in Rajasthan, the cooking of eggplant in Turkey over the cooking of eggplant in Greece, the sugar derived from beets in Romania and from cane in Cuba –that would become part of my education as a cook. [pg 128]”

I loved that she basically fell into cooking because she had no skills as a teenager, grew to love it, and then decide to teach herself how to do it. Traveling the world and exploring different foods instead of going to some fancy chef school sounds like such a better education–and definitely more fun. 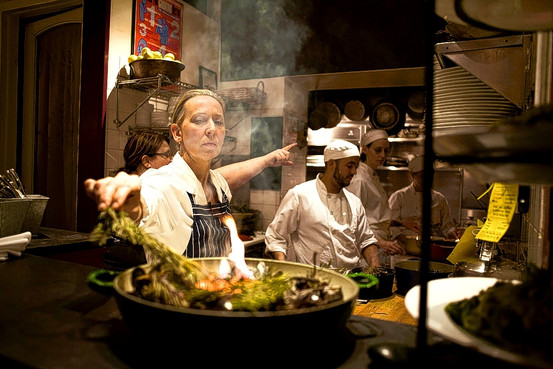 She spends some time in the middle of the book describing her path to opening her first restaurant, the struggles she went through that I’m sure all chefs encounter, and how she became successful. The grassroots method of her opening her restaurant was fascinating to read about.

The last 1/4 of the book, however, wasn’t as great as the first half. I felt like she was a really unhappy person and a lot of that unhappiness was of her own making. For example, she married an Italian doctor who immediately lost interest in courting her pretty much the second they signed the marriage license. She describes their relationship as essentially being buddies who got together a few times to have two kids and then go home to Italy once a year to see his family. They didn’t live together (separate apartments) and had no loving relationship whatsoever. It was such a turn off for me. The whole book she was painting herself as a strong feminist and then she signs up for (and stays in) a loveless marriage? It was just so odd.

Despite that disappointing part of the book, I enjoyed the rest of it. I loved her writing style and the words she chose to describe things painted a picture for me so vivid I felt like I was there. The grittiness, the apathy, the happiness…all present in her words.

If you’re nervous about descriptions of animal butchering (the title kind of made me nervous) don’t worry. There was really only one paragraph in the book that was too much for me to read. It was more about the rest of the story and not the actual act of butchering and cooking animals. If you’re interested in reading memoirs or memoirs about chefs in particular, I’d recommend this book. Just be prepared for it to not be a “and they lived happily ever after” kind of book.

QUESTION: Have you read this book? What did you think?

7 thoughts on “Blood, Bones and Butter”