“Our battered suitcases were piled on the sidewalk again;
we had longer ways to go. But no matter, the road is life.”

There’s something magical about The Road. I love packing for a vacation, anticipating new adventures, different foods and sights. I don’t really experience “homesickness” when I travel. Instead, I often feel that itch to go somewhere else. I attribute that gypsy drive to my blood. My Grandpa was the same way–restless, ready to travel, ready to go anywhere else. He’d wake up one morning and turn to my Grandma and say, “Helen, get in the car. We’re going somewhere.”

Most of my fantasies and daydreams involve getting in a car or plane and taking off to parts unknown. One year I went on a road trip from Portland to Kalispell, Montana to visit my best friend Rachel. She was living in White Fish, a tiny little town at the base of Glacier National Park. I drove almost 600 miles by myself to visit her for a week. Hitting that open road by myself in a somewhat reliable car with just a map, a single bag of clothes and my music blaring is probably one of my favorite memories of my 20’s.

Ever since I’ve been dating Michael we’ve gone to Bend for my birthday. It’s the perfect location for us. It’s an active town with lots of outdoorsy activities. It’s easy and fun to spend a weekend there and play in the snow. This year was no different.

For weeks leading up to my birthday, I looked forward to that road trip. It’s a scenic 3 hour drive from Portland: over Mount Hood, passed Ski Bowl and Government Camp where all the skiers and snowboarders are playing; and then through High Desert scenery. It’s a pleasant drive. This time, the drive over Mount Hood was sketchy. It had been stormy in the Northwest for awhile and the mountains were getting dumped on by fresh snow. I have to admit I was a little nervous about driving over the pass but we made it ok.

This year we stayed at The Pines at Sunriver. I think it’s a condo or timeshare deal. We bought a Living Social Escape for a screaming deal for two nights’ stay. Sunriver is probably the best place to stay in Bend. It’s gorgeous, it fun and it’s really close to Mt. Bachelor. I think the snowshoeing on Bachelor is far superior to Mount Hood. We got lucky this year. We bought the Living Social deal for the hotel MONTHS before Michael lost his job, otherwise we never could have afforded to go on vacation this year.  Since it was paid for, we went! Not only that, our room had a full kitchen and washer/dryer combo! Even better! We packed a bunch of food to safe even more on money. 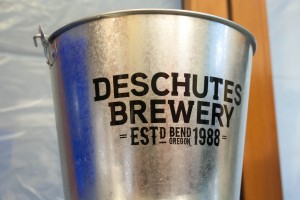 The first thing we did when we arrived in Bend was go to the Deschutes Brewery for a tour and tastings! The original plan was to start with some snowshoeing but the day was rainy and ugly and it was getting close to dusk–not the time to be tromping through the snow. 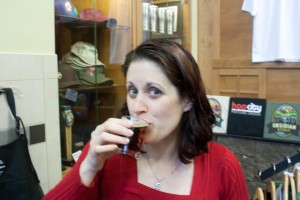 While we waited for the Deschutes tour to start, we drank our samples!

My favorite sample was the Hop Henge IPA (8.5% alcohol, IBU’s 95). It was redder, hoppier and tasted crisp–like a Ruby Red Grapefruit. 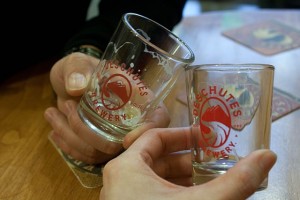 The Red Chair is my second favorite of their seasonal beers (6.2% alcohol, IBU’s 60). It’s a smooth, red ale that isn’t overly flavorful on either end of the spectrum. It’s a good “middle of the road” IPA. Apparently the “Red Chair” was made for the Mount Bachelor anniversary. 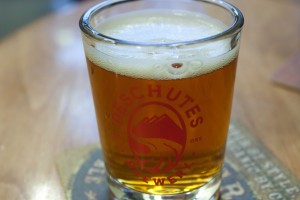 The Jubelale (6.7% alcohol, IBU’s 60) is the seasonal beer and it’s not my favorite. It’s a really dark, malty beer that tastes an awful lot like coffee to my palette. 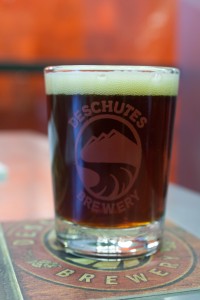 They commission artists for the Jubelale labels each year! I loved this fun fact and we got to see the paintings from the beginning to the current year. 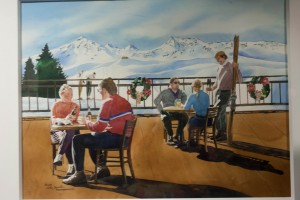 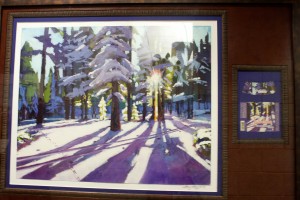 The tour started shortly after we were done with our samples. Everyone that worked there was really friendly and pleasant and our tour guide, Jeff, was super knowledgable and confident. I had a great time on the tour and learned just enough about beer and the process to appreciate how awesome Deschutes is! 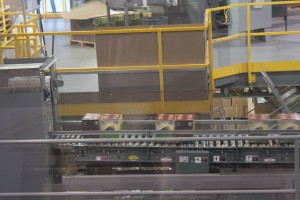 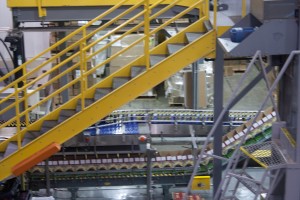 The brewery currently has two brewmasters plus the assistants. The employees get to taste-test ALL of the beer in the sensory testing room. It’s a blind test that they all participate in a few times a week. 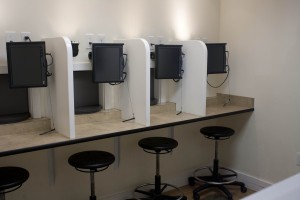 They check for clarity, color, flavor and they use a chart like this: 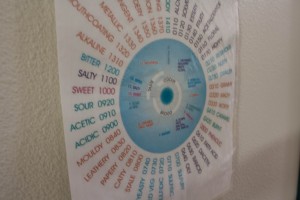 The guide said they usually didn’t run the lines on Fridays but the power had been off because of the storms in Bend so they were making up for lost time. The line start to finish takes 5 minutes. He said that was 380+ bottles per minute to be produced! It was really cool watching the operation right before our eyes. I wish we could have walked down there to see it up close. 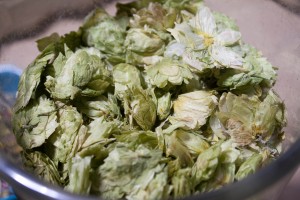 After our brewery tour (so much fun, FREE and totally worth it if you are in Bend on vacation), we headed to our rooms at Sunriver to get settled. Our condo was huge! There was a full kitchen, a huge bathroom with a jacuzzi tub, a very large bedroom and the living room was big enough that there was a full couch, dining area and a Murphy Bed option.

My favorite part: the gas fireplace. I love those things. I would kill to have one in our house–with just a flip of the switch there’s a warm fire! 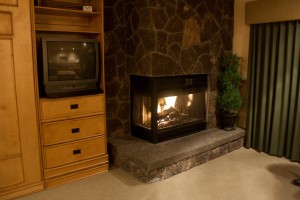 We headed over to the main lodge at Sunriver to get dinner. We went to The Owl’s Nest at Sunriver. It’s classified as a “sports bar” but it didn’t really feel like one. There was one section with TVs on and a bar, but the other part was a classy, dimly lit, romantic restaurant. 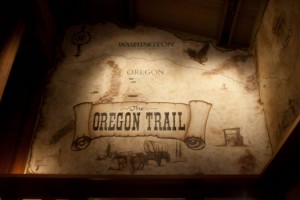 We relaxed at our romantic table in the corner and I ordered a Boneyard IPA–which became my favorite beer of the weekend. It’s a smooth IPA, lots of citrus flavors but no bitterness or weird aftertaste. LOVED it! (7.5% alcohol, IBU’s 75) 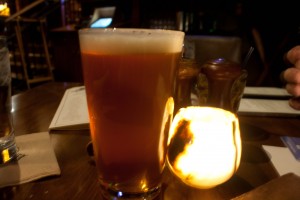 For dinner we went the cheap route: we both got a cup of the French Onion Soup and we split the turkey panini. The French Onion soup was delicious and had chopped green onions, melted Gruyere cheese and a crostini on top. I loved the soup and wished I’d skipped the sandwich and just gotten a huge bowl of the soup! 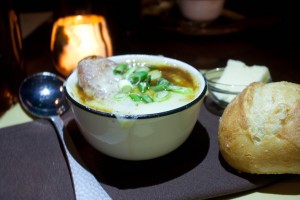 Splitting the entree was right choice: not just to save money but to save calories. The sandwich was really big and neither of us could have eaten an entire one alone. Especially not with fries, too. The panini came with a marinated tomato pesto, muenster cheese, bacon and arugula plus the turkey. Holy cow! 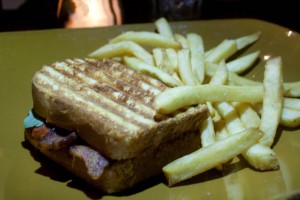 The food was great, the atmosphere was relaxing and the service was really good (we’ve ALWAYS had wonderful service at Sunriver).

I didn’t get in a work out on Friday like I planned. It was the first time I’ve skipped one. I could have used the gym at the resort, it was open until late Friday night, but I decided to just enjoy a day off and make up for it in the snow the next day! After a very full day it was time to retire back to our cozy room and jacuzzi tub. Hubba hubba!