So recently at work I won a raffle and the prize was one of those neighborhood “lending library” boxes!! It was super cute too! 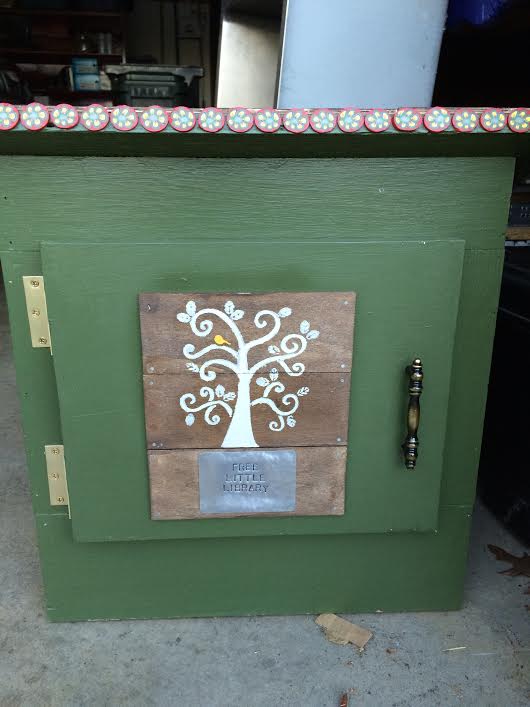 And it came packed with some books. Mostly kids and teen books, which is fine. I’m going to set it up somewhere on our street for everyone to enjoy. There was also a cozy throw blanket, a cute plastic bag, a mug and hot cocoa. 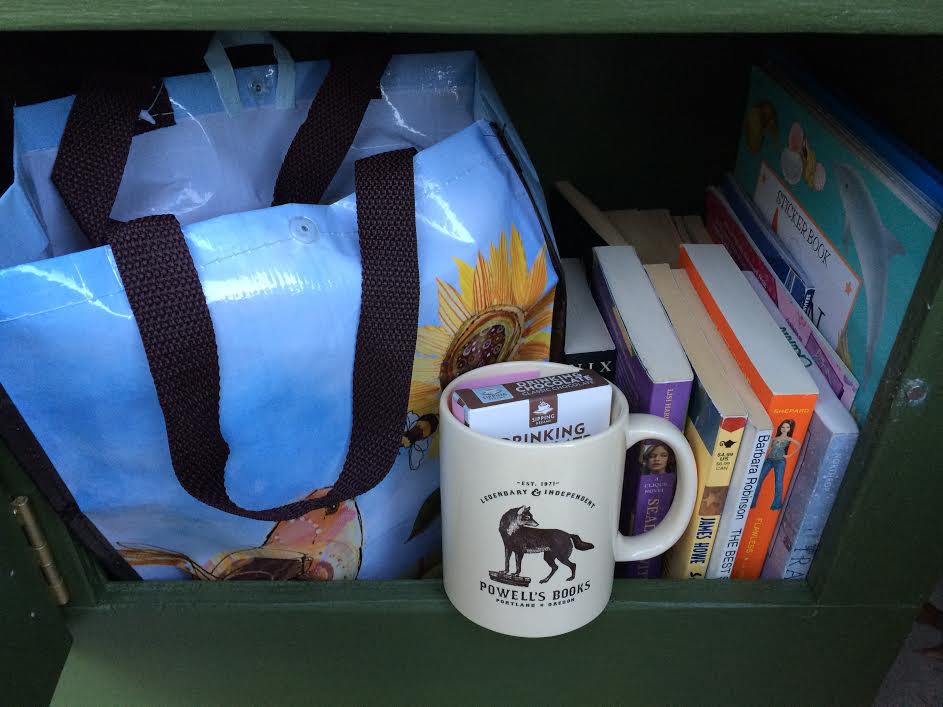 I’m hoping this lending library box gets lots of use in my neighborhood! I found it kind of funny that this is what I won, too, considering how much I read. LOL

Okay, here we go on books. I’ve read some good ones lately.

1 )  All the Light We Cannot See by Anthony Doerr

Marie-Laure lives with her father in Paris, where he works at the local museum. It’s the beginning of World War II. Marie-Laure is also blind and her father, who will melt your heart, builds a miniature version of their neighborhood so she can learn it and soon he takes her out and teaches her how to navigate her way through the city without him. Soon, the Nazis invade and Marie-Laure and her father flee the city, unbeknownst to her–transporting a priceless gem from the Museum to another museum director in another town. Except when they arrive, after a very long, harrowing journey, he’s gone. With no where else to go and Nazis closing in on towns everywhere, they flee to Saint-Malo, a walled citadel city by the sea where her great-uncle Etienne lives.

The story also follows Werner, an orphaned German youth living in an orphanage with his sister. Werner loves radios and transmitters and teaches himself how to fix and build them. Soon Nazi soldiers take him under their wing and he becomes part of the Hitler Youth movement. As the story unfolds, you grow to like Werner and wish he had had other options because he seems to have a good heart and not quite believe in the propaganda he’s groomed to believe in. Of course, Werner and Marie-Laure meet and the story goes on.

I would have to say that Marie-Laure might be one of my favorite book heroines. I just love her character and I love her father and uncle, too. They are all so charming and wonderful! I loved the book. It was a fast read, which surprised me because of the subject matter. The fear that the French felt during the occupation was palpable on the page. It was a really, really well-written book and I see why it was so highly rated on every book list! 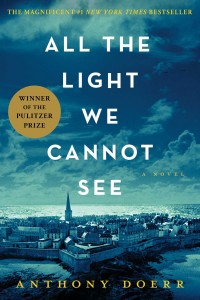 2 ) Water for Elephants by Sara Gruen

I didn’t like this book in the beginning. I’m not a fan of circuses or stories about the circus and I absolutely hated the animal abuse. I ended up skimming the parts that either implied or described the animal abuse going on in the book. I just couldn’t read it. I considered giving up on the story but I was starting to like the main characters and wanted to know what happened. About half way through I started to get into the story and enjoyed the book a lot more. I absolutely LOVED the last few chapters and how the book ended! It was very satisfying.

3 ) So You’ve Been Publicly Shamed by Jon Ronson

What a fascinating book! And so relevant for our times. This was a book about shame and what happens to people who have become shamed. There were several case studies, the most memorable and recent one was Justine Sacco’s stupid tweet that totally ruined her life. The author interviews her several times, discusses what happened, what she was thinking when she tweeted what she said, the immediate aftermath in the early days and then months later how she was doing.

“After a lull of 180 years (public punishments were phased out in 1837 in the UK and 1839 in the US), it was back in a big way. When we deployed shame, we were utilizing an immensely powerful tool.”

“I had assumed that this demise was due to the migration from villages to cities. Shame became ineffectual because pilloried people could lose themselves in the anonymous crowd as soon as the chastisement was over.”

The book is a fascinating read about the subject of shame, how it ruins lives, how some actually come out the other side stronger and get over it, but most spiral into depression and PTSD like symptoms. What I found fascinating was just how damaging the current world (i.e. social media) is when it comes to this topic. Like Ronson stated, the old public punishments were brutal and sometimes physical but were they worse than the way social media can completely DESTROY someone?

“Social media shamings are worse than your shamings,” I suddenly said to Ted Poe [a Houston judge who uses public shaming in his sentencing tactics].

He looked taken aback. “They are worse, they’re anonymous.”

“Or even if they’re not anonymous, it’s such a pile-on they may as well be…”

The pile-on factor is huge. We’ve all seen it. Someone posts something stupid, offensive, whatever on social media and even if they don’t have that many followers, it only takes one person with a lot of followers to retweet or repost and then it spreads like a virus. I think every single one of us has read a story or known someone who said something in jest, or something just plain stupid, and then see it spiral out of control. And it’s not like you can just delete and move on. Screen shots live forever…

He did discuss one guy touched by scandal who managed to overcome it and he said: “As soon as the victim steps out of the pact by refusing to feel ashamed, the whole thing crumbles.” Interesting. Take the power out of it. Ronson also discussed a business that works on rebranding people who have gone through public shaming. Part of their services is to scrub the internet of history (which doesn’t always work) so the rebranding can happen–which was a very interesting chapter.

This book was very eye-opening and kind of frightening. I can see where a book like this could make you second guess EVERYTHING you say online… Sometimes it doesn’t take much for a normal person who didn’t intend for something bad to happen to just….implode. On the flipside I think we also live in a time where a lot of people are looking for something to be outraged and offended over. They need that adrenaline or fake fight/controversy and that negativity is contagious. 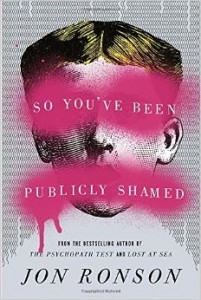 Violet was born in 1887 in Argentina. Her parents were Irish immigrants and her mother had many many children (most did not survive) and Violet became a nursemaid, housemaid, basically a surrogate mother to her siblings. The book is a memoir about her amazing life. After her father dies and the families moves back to England, she realizes she needs to help support the family and she becomes a stewardess aboard ships. She spent 40 years on the ocean as a stewardess and she was so well-loved by the passengers that many wrote home naming her specifically.

Violet happened to be a stewardess on that infamous oceanliner, Titanic. She described in detail what that evening was like, how it felt to be put in the lifeboat and lowered into the icy water and watch as the giant ship sank. She counted the rows of windows, astonished as they disappeared into the black ocean. Her accounting is chilling and shocking. Then, if that wasn’t enough, she returned to the job aboard another ship (you’d think she’d be done working on ships!) and eventually was aboard the Brittanic that struck a mine and sank! Her story is amazing–what she survived, how it all rolled off her back and never damaged her psyche or her spirit. It’s an amazing story!

5 ) The Longest Date: Life as a Wife by Cindy Chupack

I found this book very charming! It was a memoir by a writer from Sex and the City. She met and married her second husband (the first turned out to be gay) when she was 40 and then they tried (unsuccessfully) to get pregnant. The memoir was funny, smart, a fast read and very sweet. I could relate to some of the stuff she talked about in regards to relationships and it was just a really good read! 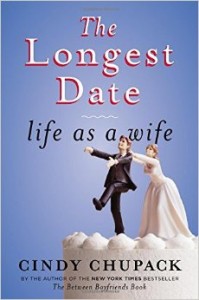 6 ) Elizabeth Is Missing by Emma Healey

When I first skimmed the blurb for this book it sounded pretty straight-forward, an elderly woman who is losing her memory is concerned about a friend of hers that has gone missing. No one will listen to her. She’s worried and wants to find her friend. But as you read you start to realize that there is way more to this book than that simple premise.

First, (and this isn’t a spoiler because you realize it pretty early in the book) Maud is not just slipping into dementia. She is smack-dab in the middle of it and it’s very, very severe. To the point where mid-conversation she doesn’t know that she’s speaking to her daughter. It’s heartbreaking to read and if you’ve ever dealt with someone with Alzheimers or dementia it might be a difficult book to read.

Second, it turns out that Maud’s older sister Sukey disappeared in the 1940’s, never to be found again. Part of the dementia for Maud is not knowing what time period she is in and she’s remembering the story of her sister’s disappearance. Everything ties together in the end.

It’s a good book, although very hard to read.

This turned out to be a very interesting book in the series! It was actually three storylines. The first: Chief Inspector Gamache is taking time off at Winter Carnival in Quebec City with his old mentor after something tragic has happened. Of course, a murder happens and Armand is asked to assist the local police in their investigation. It becomes a good distraction for him and the crime is wrapped up in history and was really, really interesting.

The second story: Armand’s assistant Jean-Guy Beauvoir returns to Three Pines to look into the previous book’s crime, in which a beloved towns-person was convicted of murder and sent to prison. Armand had his doubts and asked Jean-Guy to look into it and find his mistake.

The third story, the underlying issue, was told in flashbacks. There was a horrible catastrophe on the force where many coworkers were killed, Jean-Guy and Armand were injured and both are on leave now trying to heal from the horrific event. The story of what happened is told slowly and was very compelling.

This was a very different way of telling a story for the author in this series and it worked really well. It was a good book! 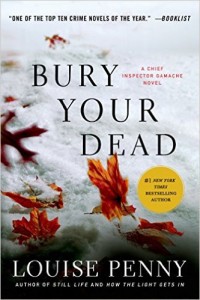 Have you read any of these books? What did you think?