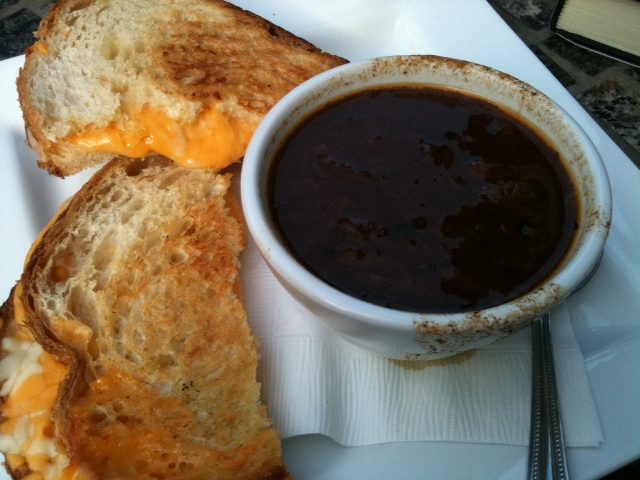 Sometimes you just reach the brink of what your brain can handle and then nothing else can stay in there. Lately I’ve felt like I’m in a brain fog. Too much to do, too many plans, too much stress, too much anxiety, not enough rest, not enough down time.

Having some down time with a girl friend to whine and wine is a good reset button. After work on Thursday I made my way to SE Portland to meet up with my cousin Anna for happy hour.

Night Light Lounge is on SE Clinton–a trendy part of town with bike lanes and lots of cool restaurants. I like Night Light. I’ve been there several times and had a nice time. I got there a little before Anna arrived so I posted up at a bistro table outside with my book and just decompressed.

Anna arrived and we ordered wine. The first glass I got was the Syrah/Granache blend. It was an earthly, bold red wine that was a little stronger than what I prefer.

I love that their happy hour goes late. I ordered the grilled cheese with soup combo. I got the French Onion soup.

The sandwich was great, it was on a crunchy artisan bread. The soup was pretty good but lacking the cheese and croutons on top–which kind of make French Onion soup really good. I still enjoyed it. And honestly, the soup lacking cheese and croutons is lower in calories,  so that’s alright.

The soup was in a small cup, so it was the perfect portion size. We sat outside in the strange weather–sunshine, then clouds, then warm temperatures, then the sweaters went back on. At least it didn’t rain on us!

Anna is on her quest for the best mac n’ cheese in Portland (much like my burger quest). She ordered the spicy mac n’ cheese. I had a bite. The mac n’ cheese had great flavor–it was definitely spicy–but it was lacking something. I think it needed the cheese to be creamier.

I ordered a glass of the Tempranillo, recommended by Anna who has been to Spain many times, and it was a lovely, light red wine. It was sweet and gentle. I drank half of it and poured the rest into Anna’s wine glass. I’m such a light weight.

It was a nice time out. I hadn’t intended on eating out two days in a row, but I think my choices were okay. We went back to Anna’s place and talked until I realized how late it was and I headed home.

Friday morning I went out to the garden to cut some fresh lettuce for a coworker and I decided to give her some cilantro because the plant is overwhelmingly big and I thought she’d like it.

Want to know something funny? I don’t think it’s cilantro!! Remember I posted earlier this week asking what the heck I should do with all this cilantro? I got some great suggestions from readers but…

How did I make that mistake?!

QUESTION: How do you cure Brain Fog? And do you have any fun plans for the weekend?