Apparently I was supposed to have brushes with death during my entire birthday weekend.

Usually we go to Bend and snowshoe; I love staying at Sunriver. This year we went somewhere new, to Sisters, Oregon, which is not that far from Bend but neither of us had been. Michael and I bought a Groupon special for The Lodge at Suttle Lake. Chances are, if we’re going out of town for the weekend it’s because of Groupon. 🙂

Michael and I drove over the Santiam Pass to Eastern Oregon, usually we go over Mt. Hood. I haven’t been over this particular Pass since I was a kid. It was a little bit icier but a beautiful day. We drove by Detroit Lake and the Dam, through scenic, winding roads along a river. We were just driving along in Michael’s car (VW Tourag) that weighs like 3 tons and has tires bigger than my all four of the tires on my Ford Focus put together…when we hit a small patch of ice on the road. The car fishtailed back and forth a few times, Michael tried to steady the car as it swerved a bit into the oncoming lane (thankfully there was no traffic) and then almost into the guardrail keeping us from plunging into the icy river. He righted the car in only a few seconds but I assure you, it felt like minutes. Of course we were both shaken up by that. I think I was shaking for a good half hour afterward from adrenaline. 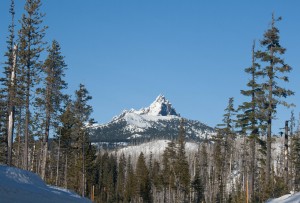 We arrived safe and alive at Suttle Lake Lodge but it was too early to check into our room. We changed into our snow clothes and then drove back up the mountain to do some snowshoeing. The Lodge we were staying at was about a 15 minute drive into the small town of Sisters, or a 10 minute drive to the top of the mountain. It was a very convenient location.

We went to the Ray Benson Sno-Park for our first time on top of Hoodoo. It was right next to the largest Autobahn Tubing in the area, or so the sign boasted. I don’t know if it was the largest in the country or just west coast. I didn’t pay attention because we left our sleds at home. 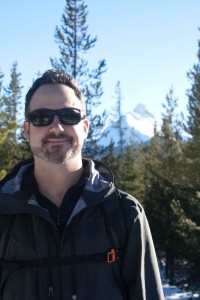 It was a really sunny, warm afternoon–probably 50 degrees! Definitely not cold-weather clothing. It felt almost like summer out there. 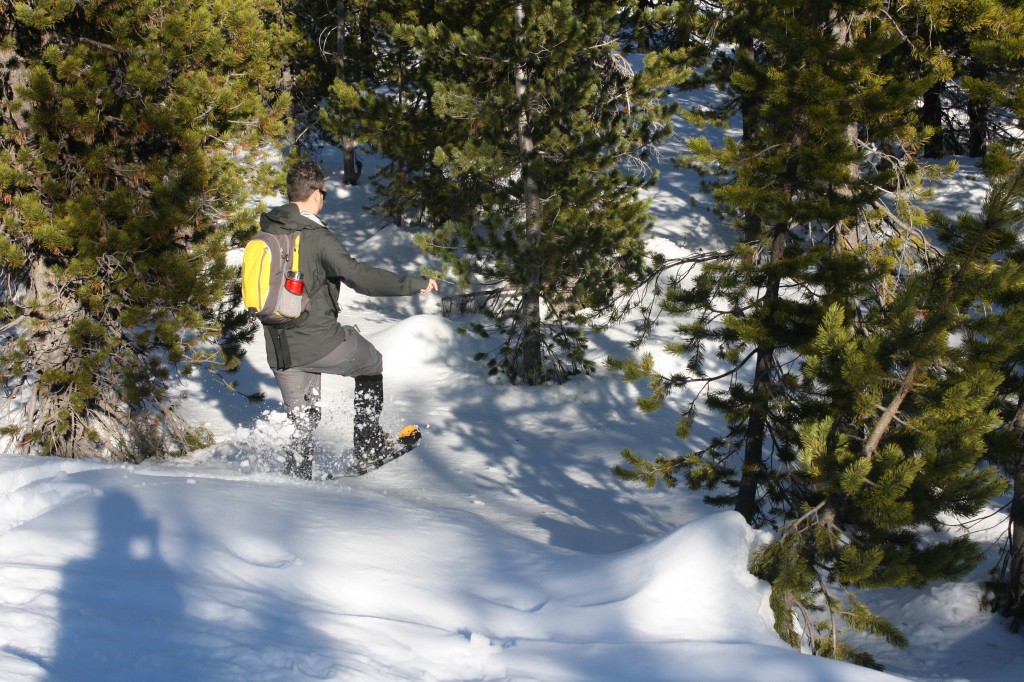 We only snowshoed for about an hour the first day there. We wanted to get checked in at the hotel and save our bodies for a longer trip the next day. 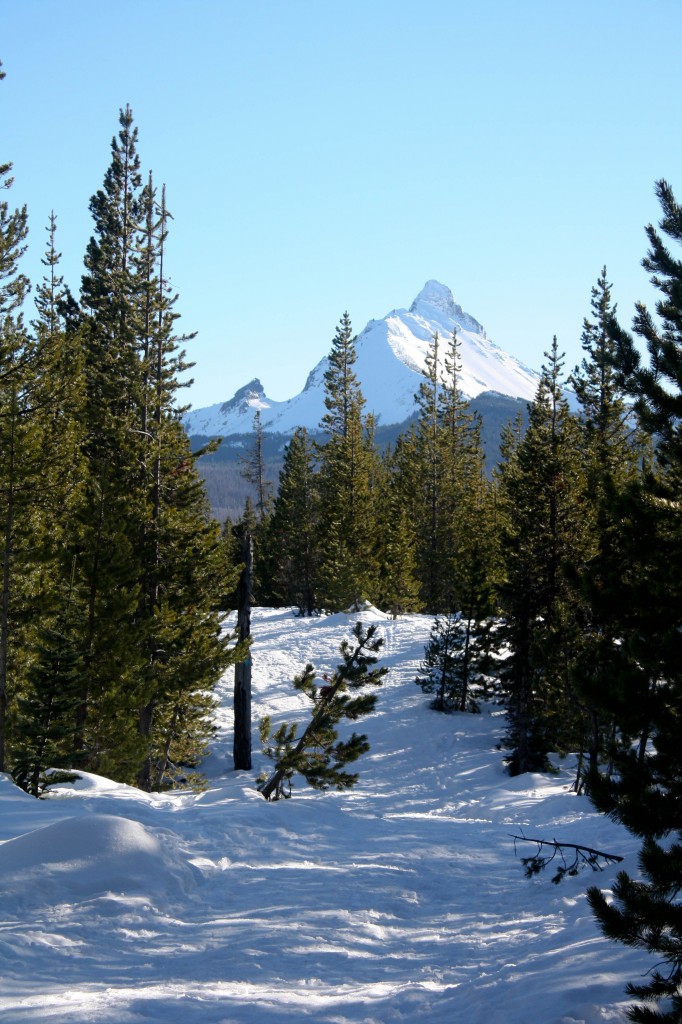 Ray Benson was a fairly nice place to snowshoe but I doubt I’d go back. It was an area shared with snowmobilers so off in the distance you could hear the snowmobiles cutting through the wilderness…not exactly what I’d call “atmospheric.” 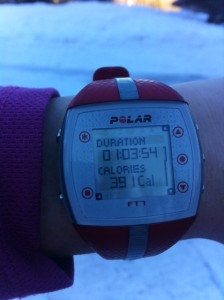 After our snowshoeing, we went back down the mountain and got checked into the lodge. It was such a cute place! It was right on Suttle Lake, which was frozen over. 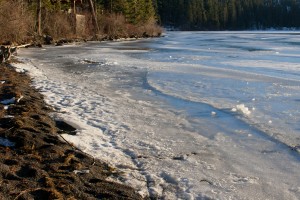 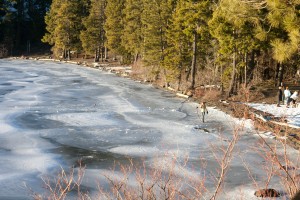 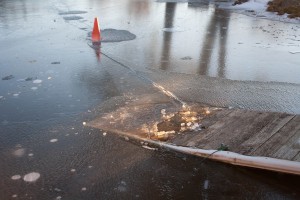 The grounds were very nice, with the area covered in pine trees and there were little cabins nestled in the forest around the lodge. 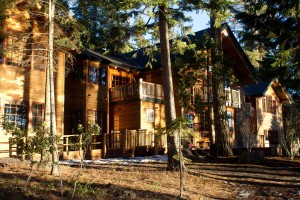 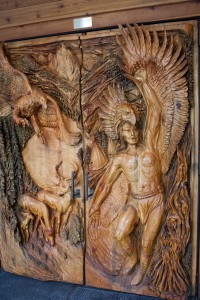 The above photo is of the lodge’s front door. The intricate carvings were amazing in person. Our room was really nice and had a view of the trees and lake; it also had a gas fireplace–which I LOVE. Part of our Groupon package included a bottle of champagne so of course we cracked that open to celebrate my birthday. I think Michael’s toast was “I’m glad we didn’t die today.” 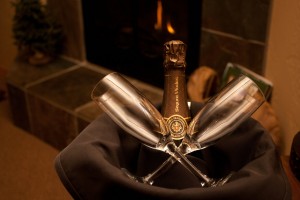 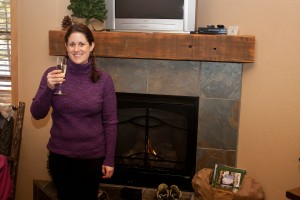 Anyhoo! Glad we didn’t die either. The Lodge hosted a nightly wine social from 4:30-6 and the first round was free to all guests–very generous! We decided to check it out. It was in the main lobby of the lodge where the big fireplace was. 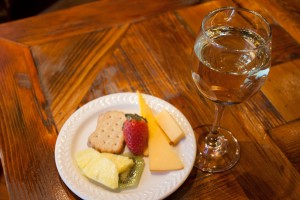 There was wine, cheese, crackers and fruit. Michael and I kind of hung around and relaxed a little bit while we enjoyed our wine and decided what to do for dinner. There was a restaurant at the Lodge but we decided to go to Los Agaves for Mexican food. We chilled for a few hours and then went there. 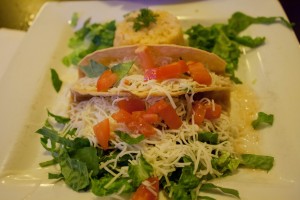 What I liked most about the Mexican restaurant was that the portions were NORMAL sized and the food wasn’t oozing in cheese or sauce. It felt like healthy food instead of gluttonous Mexican food. It was delicious and the service was top notch. We stuck with water with our dinner. I got two tacos–one shredded chicken and one shredded beef.

Back at the Lodge we settled into the room with the rest of our champagne, some chocolate and a movie (“So This is 40”). 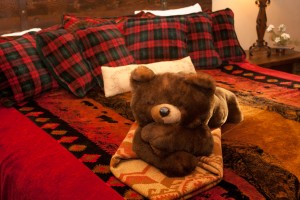 It was a nice birthday, despite our brush with death, and I loved where we were staying. I’ve never been so blown away by stellar customer service at a hotel. I would go back simply for that!

Check out the next post on how we almost died AGAIN that weekend!

17 thoughts on “Escape to the Wilderness”