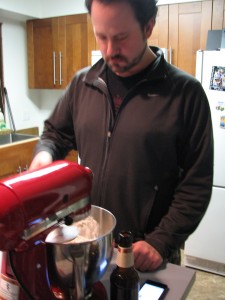 It was our third time making pizza from scratch and we figured we’d be brave and invite friends over to partake in pizza. It could have gone horribly wrong considering we’re newbies at this. Luckily Papa Murphy’s is on speed dial, just in case. 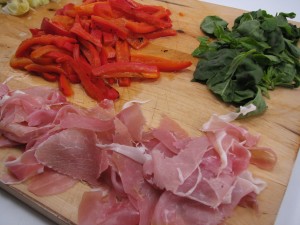 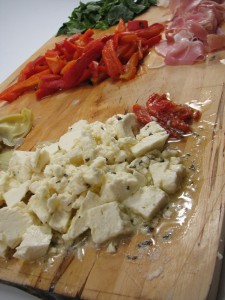 I prepped all the toppings and Michael made the pizza dough. After a few reader suggestions about baking the pizza twice, Michael thought it would be worth a try. 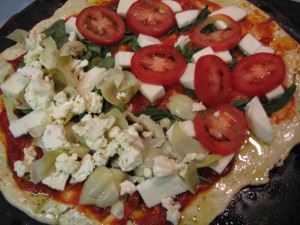 The dough recipe makes two pizzas (smallish pizzas). The first one was half Feta Cheese, artichoke hearts, basil and some fresh Mozzarella. The other half was mozzarella, tomato and basil. I totally spaced and forgot to put the prosciutto on that half of the pizza. Our friends Jenn and Steve came over and I was distracted with talking and such. The mix up was okay though, it turned out delicious anyways. I opened a bottle of Chateau Ste. Michelle Riesling. It was a special Harvest bottle and turned out to be pretty sweet. I like their Dry Riesling better. 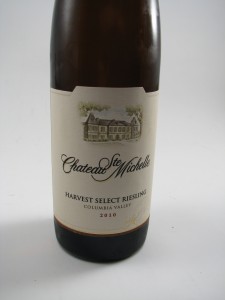 Michael baked the plain pizza dough for about 10 minutes before I put the toppings on it. Then I brushed olive oil with Italian seasoning on the crust and we baked the whole pizza again. This method worked GREAT! The first pizza was fantastic. The crust was perfect, the toppings were delicious. I like the new method of pizza making. 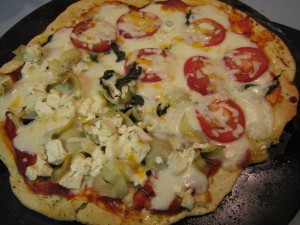 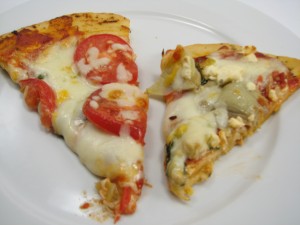 It’s not a pretty pizza–sort of a Salvador Dali-esque shape. Trust me when I said it tasted great. We each had two pieces and it was gone in minutes. Michael made up the second pizza and baked the crust first. I put the toppings on. 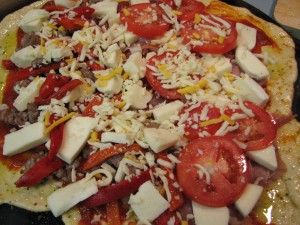 The second pizza was half fennel sausage, peppers and mozzarella and half mozzarella, tomatoes and prosciutto. 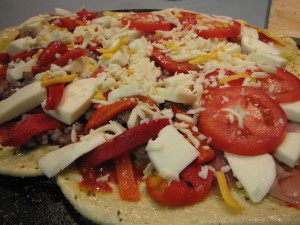 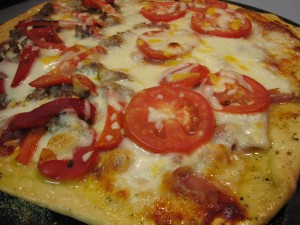 The second pizza was good too but we all agreed it was a little “meat heavy.” We ate our pizza (these smaller pies yield about 8 small slices) and then headed into the living room to play cards. 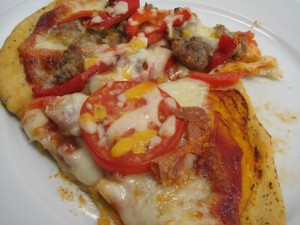 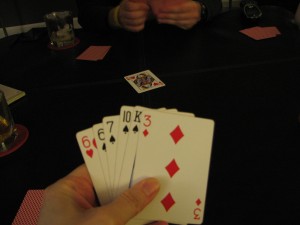 We played Spades. It’s one of my favorite card games. It’s really fun to play because it can get pretty rowdy and competitive depending on who you play with. And Michael is very good at playing poker so he’s a good partner to have. He can guess what everyone is holding. Show off. 🙂 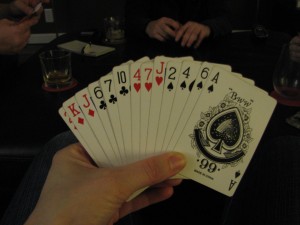 I grew up playing Spades with my family. I have very fond and happy memories of camping and family vacations where we spent hours a night playing Spades. My brother and my parents and me had a great time. A specific memory it when we’d spend a week or two every summer in a cabin in Eastern Washington. It was right on Blue Lake and the days would be spent with me swimming in the lake, fishing with my dad, or solitary hikes in the desert. Then at night after a dinner of whatever we caught that day we’d play Spades for hours. I love it!

It was a great night. The pizza was a success (thank goodness!) and it was fun hanging out with friends we hadn’t seen in awhile. I’m looking forward to hosting some more pizza parties. 🙂

QUESTION: Have you played Spades? What’s your favorite card game?