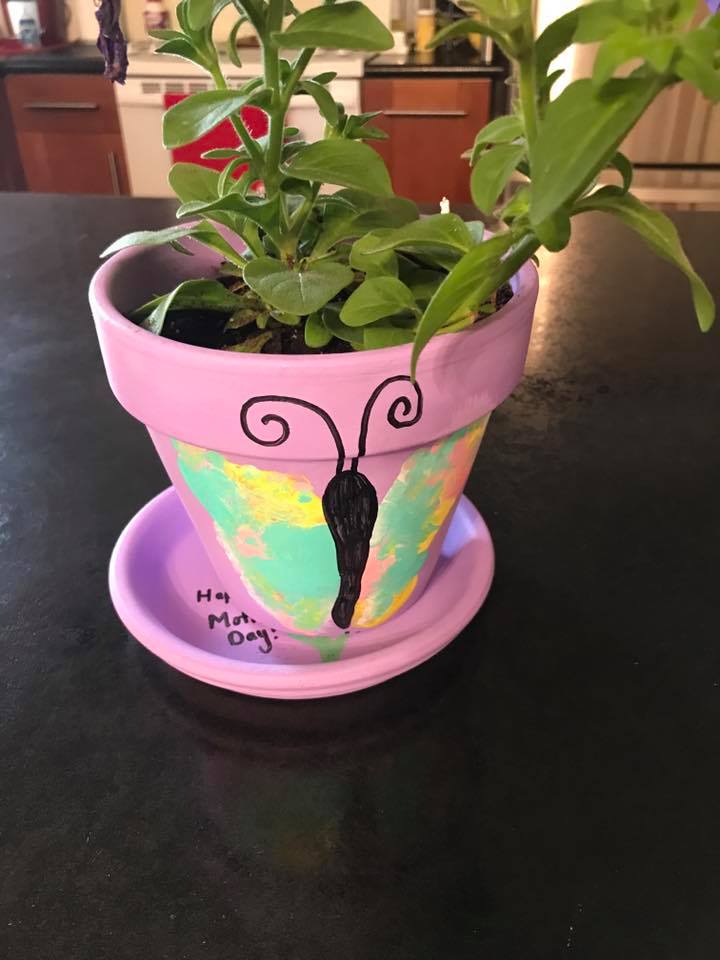 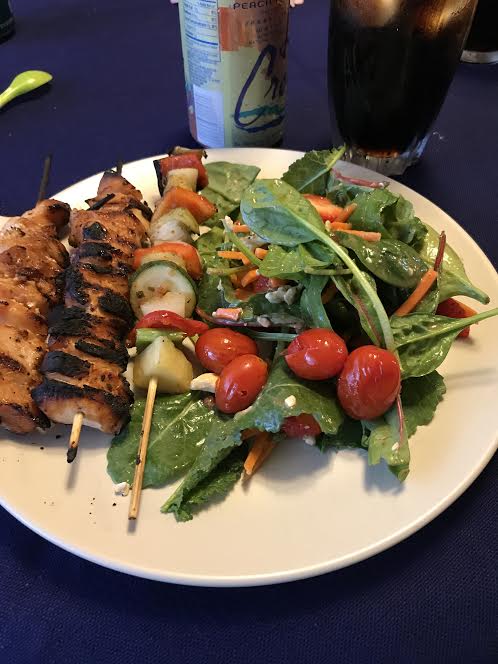 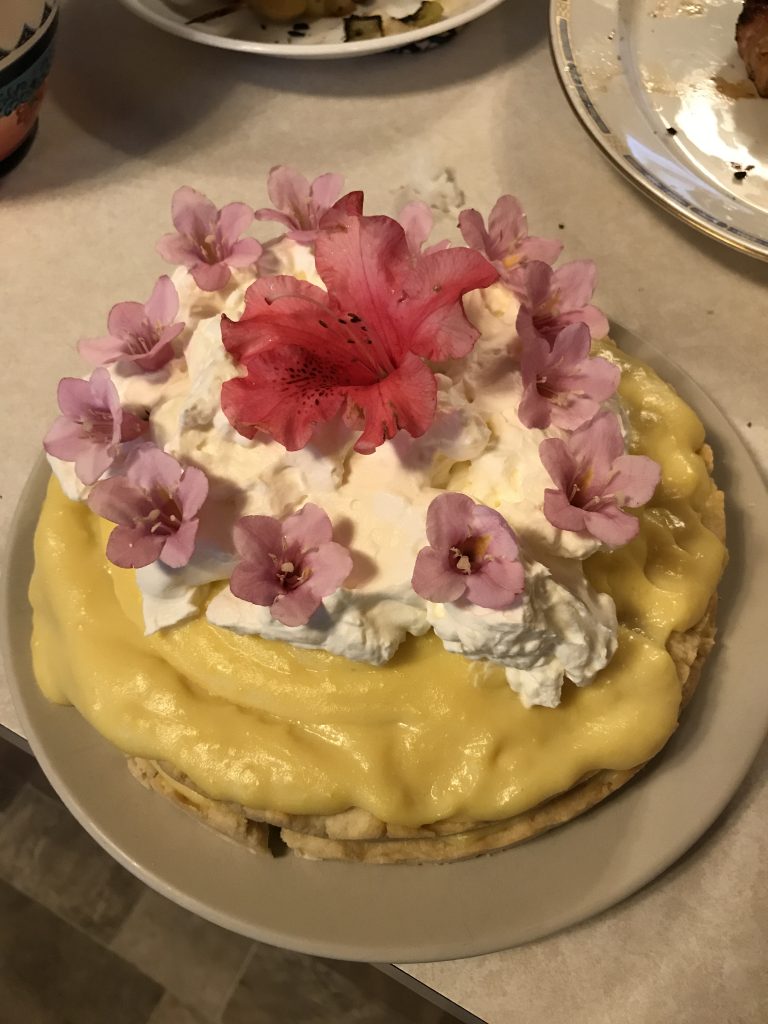 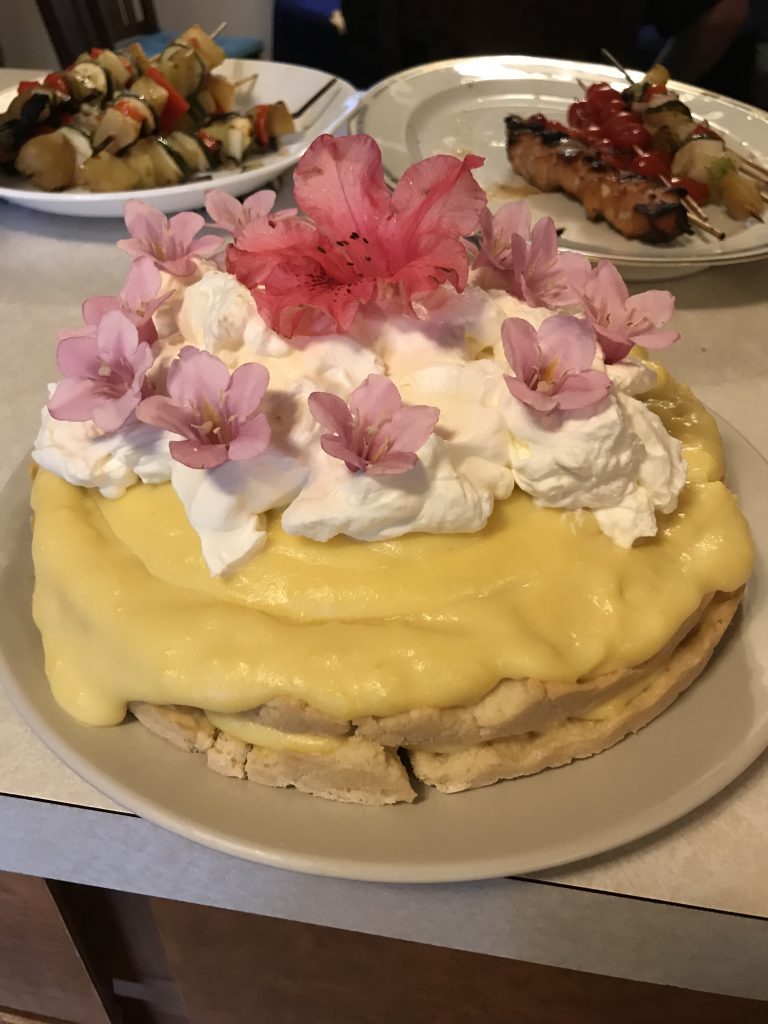 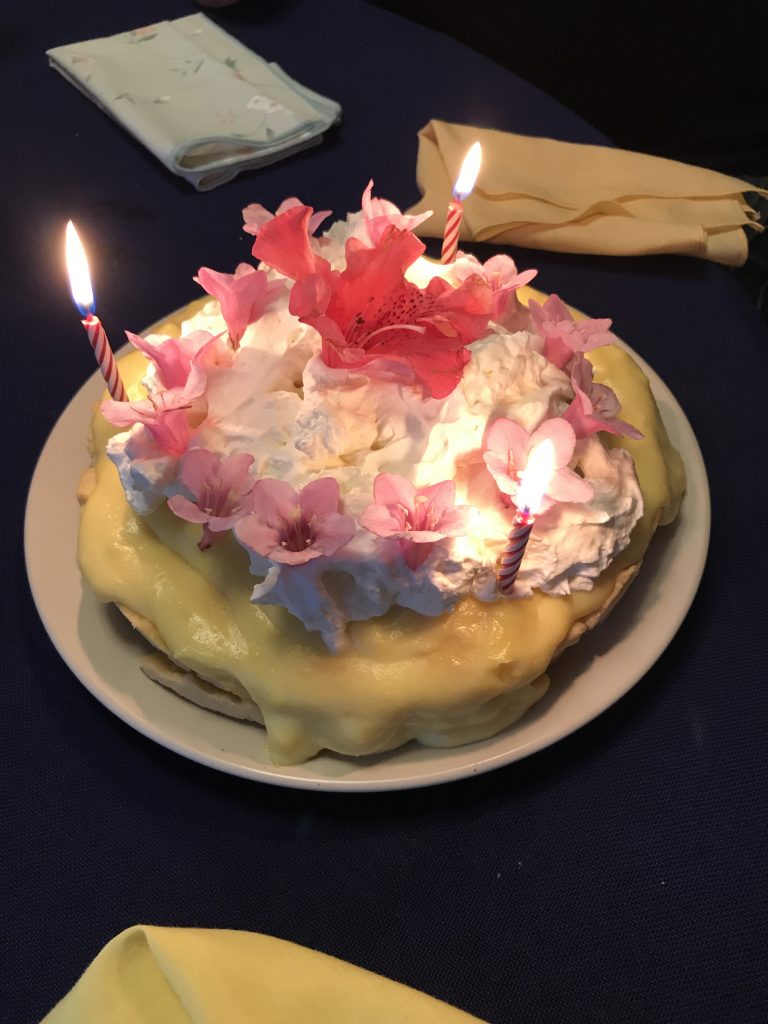 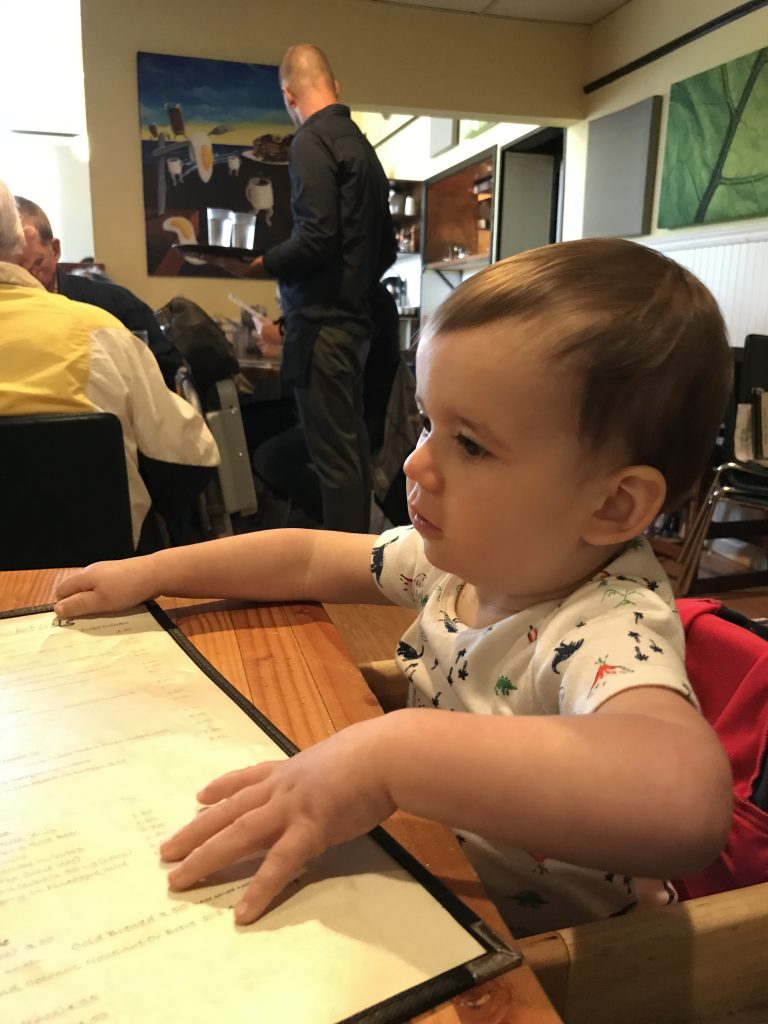 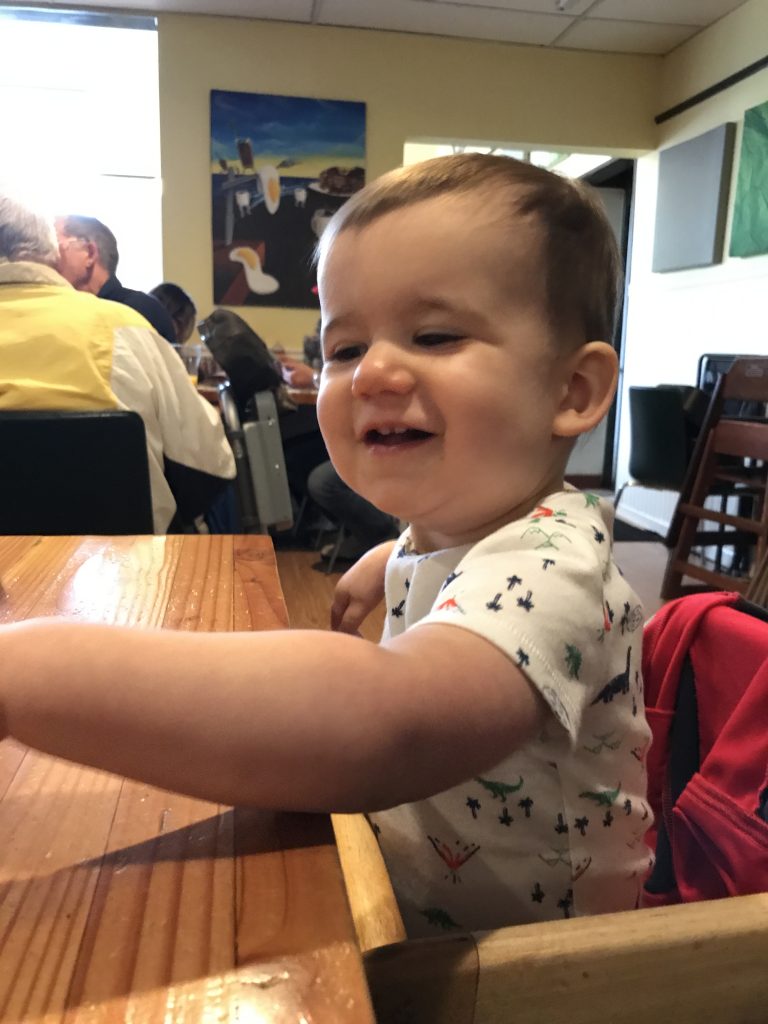 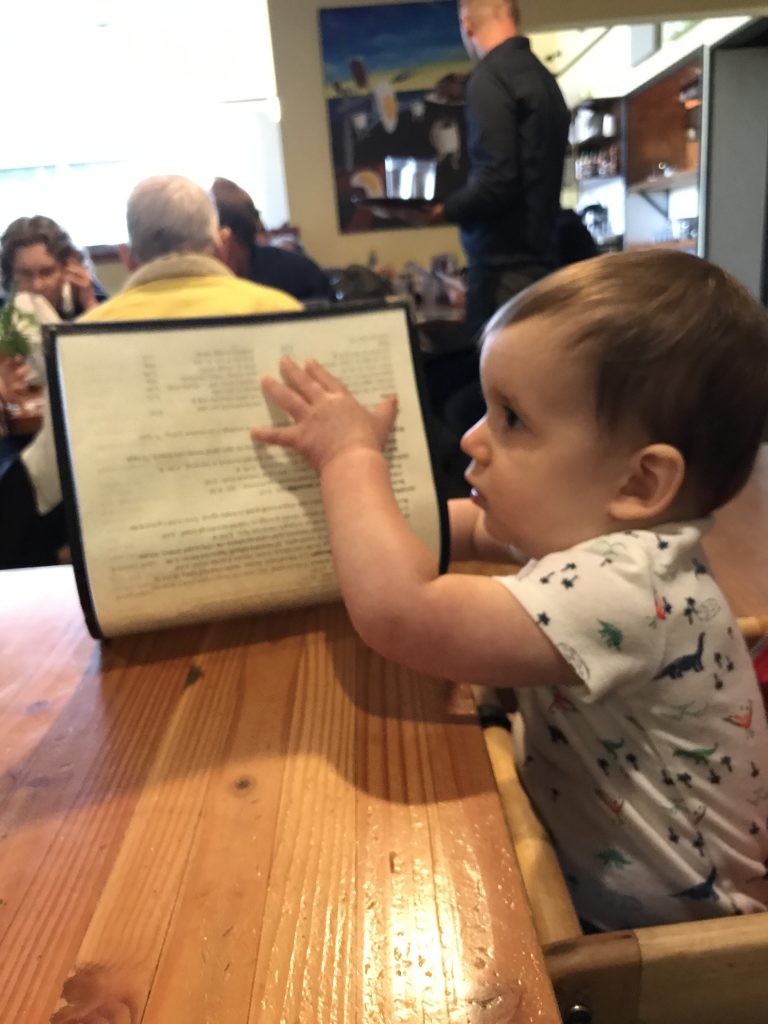 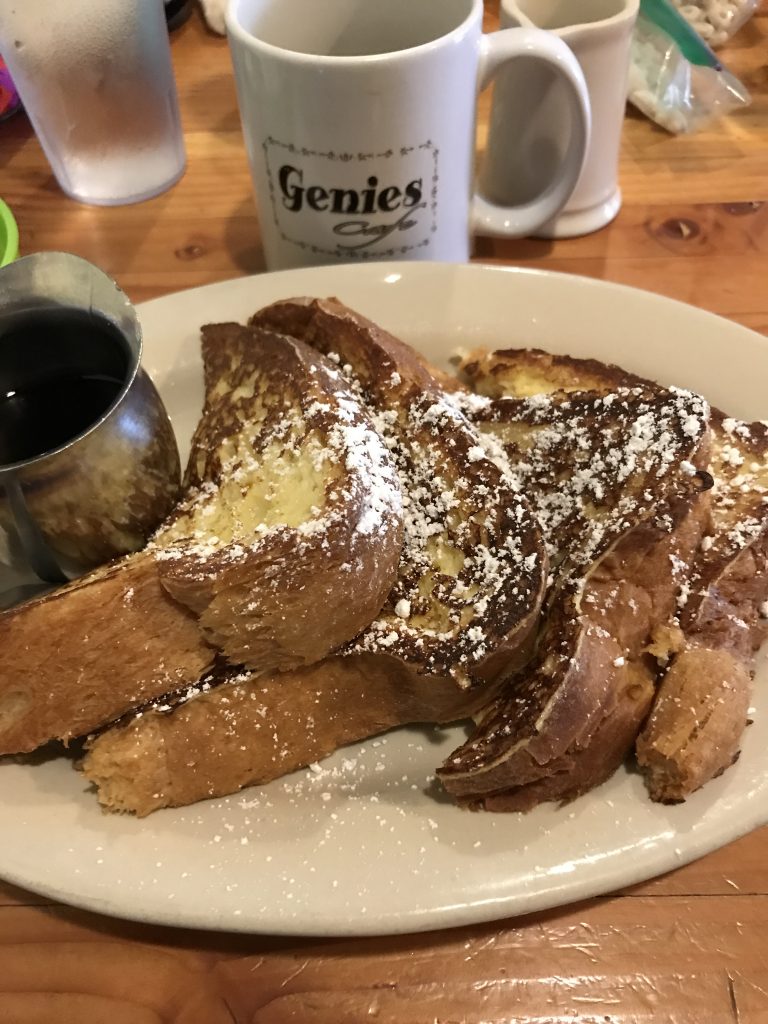 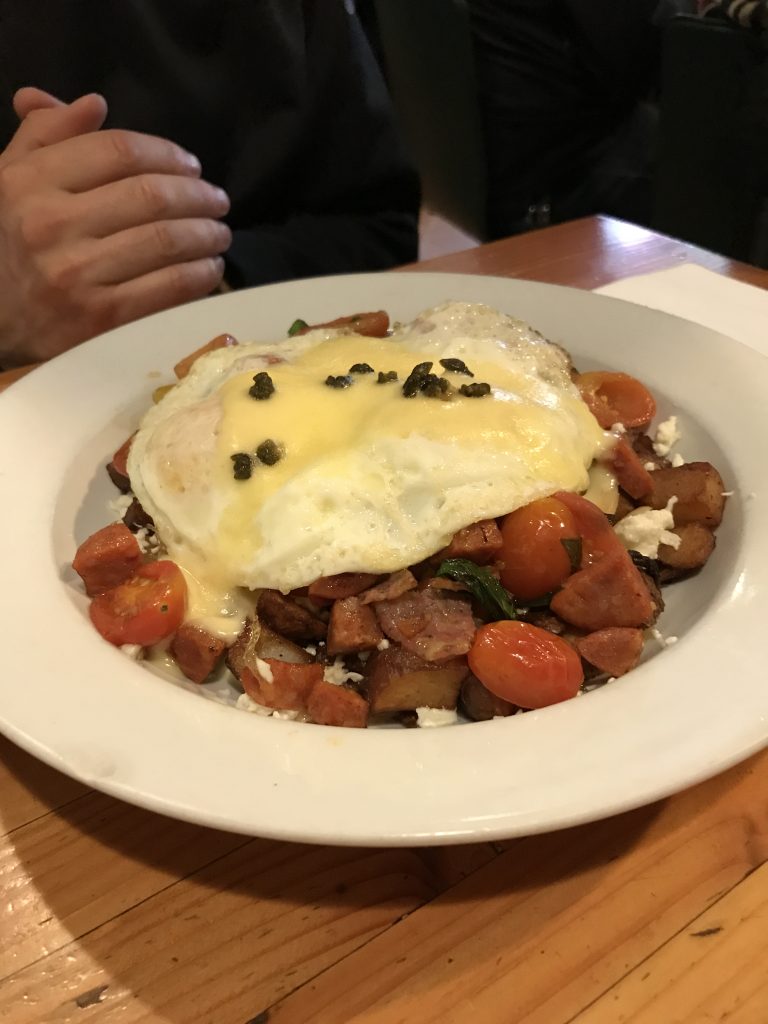 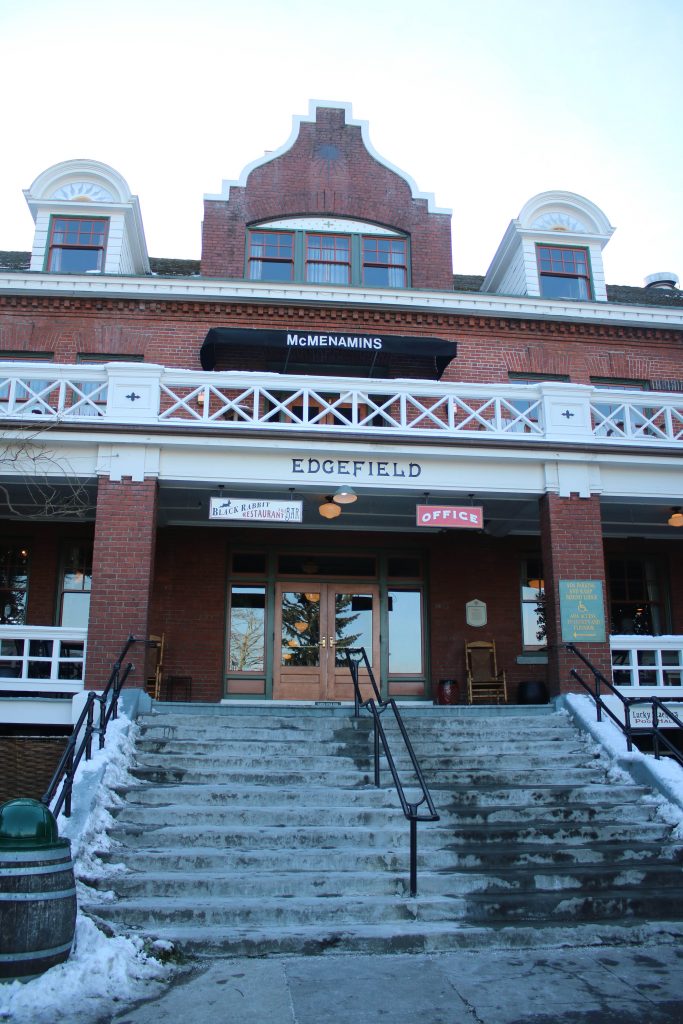 Hello from snowed/iced-in Portland! We are still snowed in. We can get around and out of the house but there is still TONS of snow and ice around town. Sunday morning I made it to the pool in the Subaru (yay!) and had the pool to myself. Then home just as my parents arrived from Seattle. We all went out to lunch at Reverend’s BBQ for my birthday and then Michael and I skee-daddled as quick as possible to go on our getaway trip!

For our wedding my aunt and uncle gave us a gift certificate to McMenamin’s and we finally used it. 🙂 It was so nice of them and it was awesome my parents were willing to babysit Logan overnight so we could have some couple’s time away. Boy, after being snowed in for a week I think we were all ready for the time away! We were all stir-crazy. 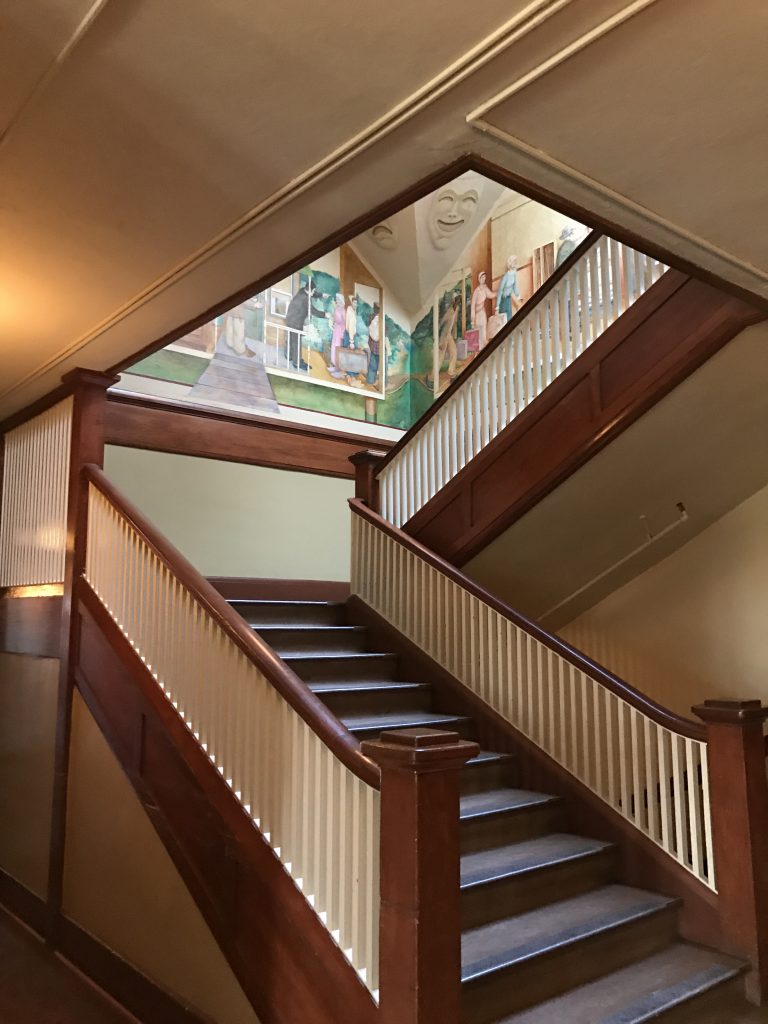 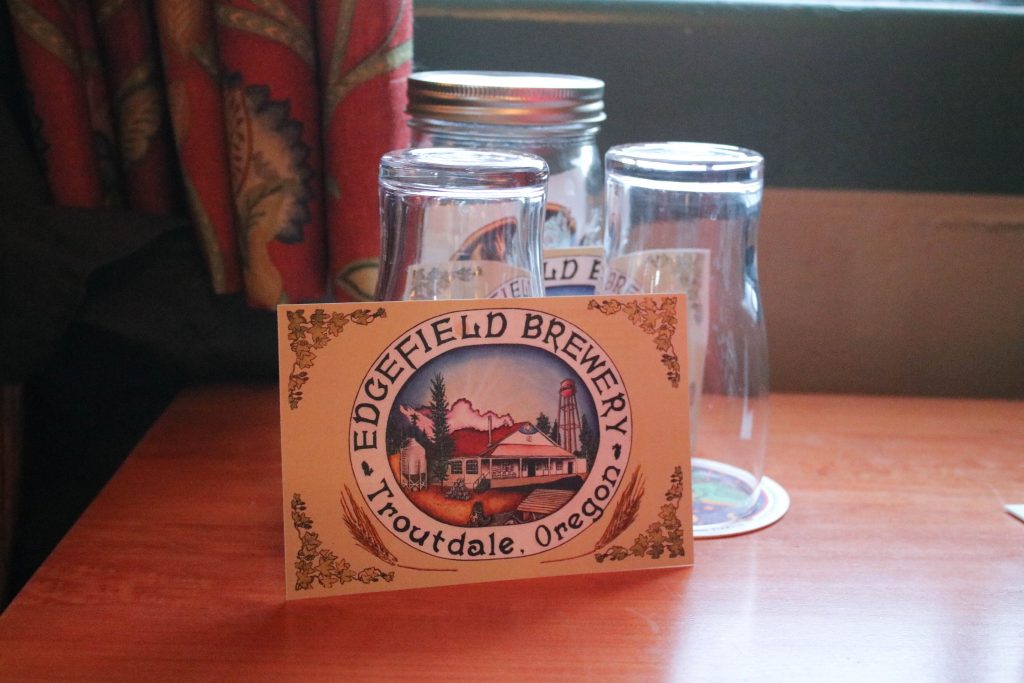 So for my birthday we spent one night at Edgefield. I’ve always wanted to stay there and we liked it so much we are already planning on doing it again sometime. It’s such a cool old building!

Edgefield is out in the Gorge in Troutdale. The weather is always way worse out there and there was a ton of snow on the ground but we were able to get there easily. We checked in and got settled before exploring.

Each room is a different theme. It’s European style, meaning no bathrooms. We stayed at the McMenamin’s in McMinnville a million years ago and we weren’t fans. The food wasn’t very good, our room was tiny and cramped and super far away from the bathroom (which was dorm style, so just shower stalls and bathroom stalls). But Edgefield was WAY nicer! Our room wasn’t far from the bathrooms and they were more private, so that was nice! You didn’t mind that there wasn’t a bathroom in your room. 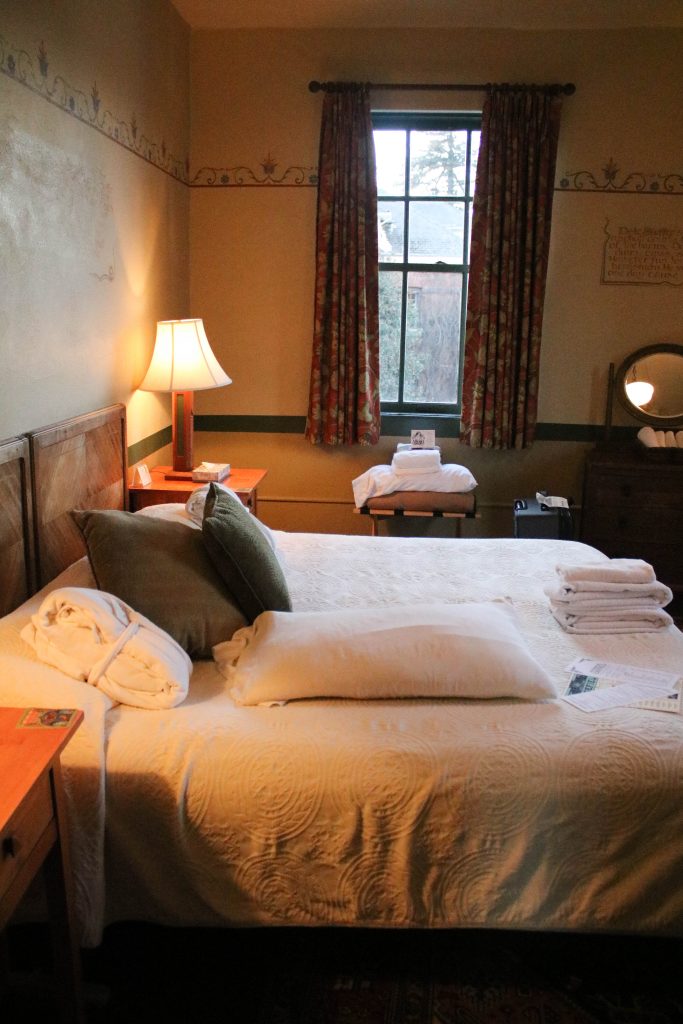 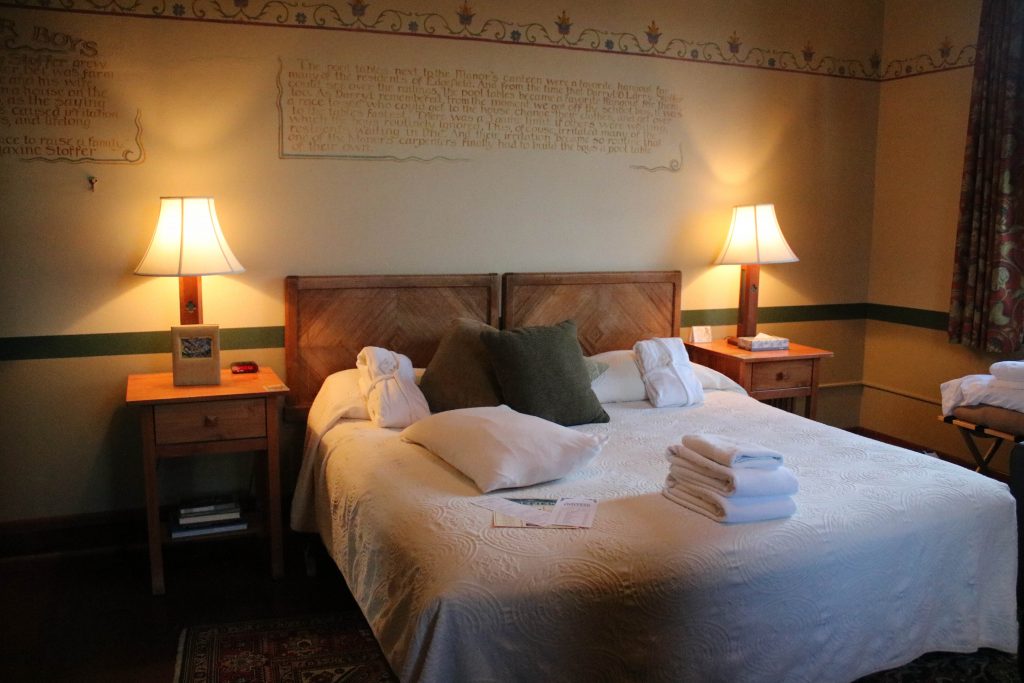 I posted a short video on Instagram of our room. We got a King bed. The room was huge and comfortable and had two windows with a view.

There is art all over the place and it’s really cool. Here are a few of my favorites: 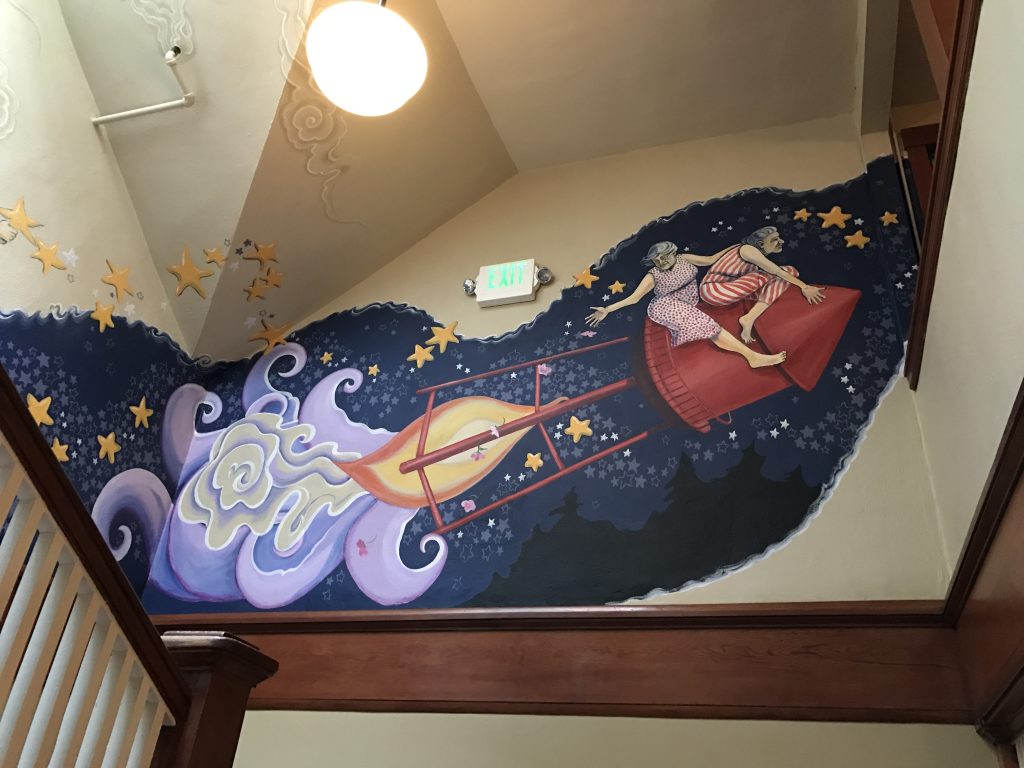 The elevator was that old-fashioned kind where you open the door and the elevator door slides open. It was slightly scary. 😉 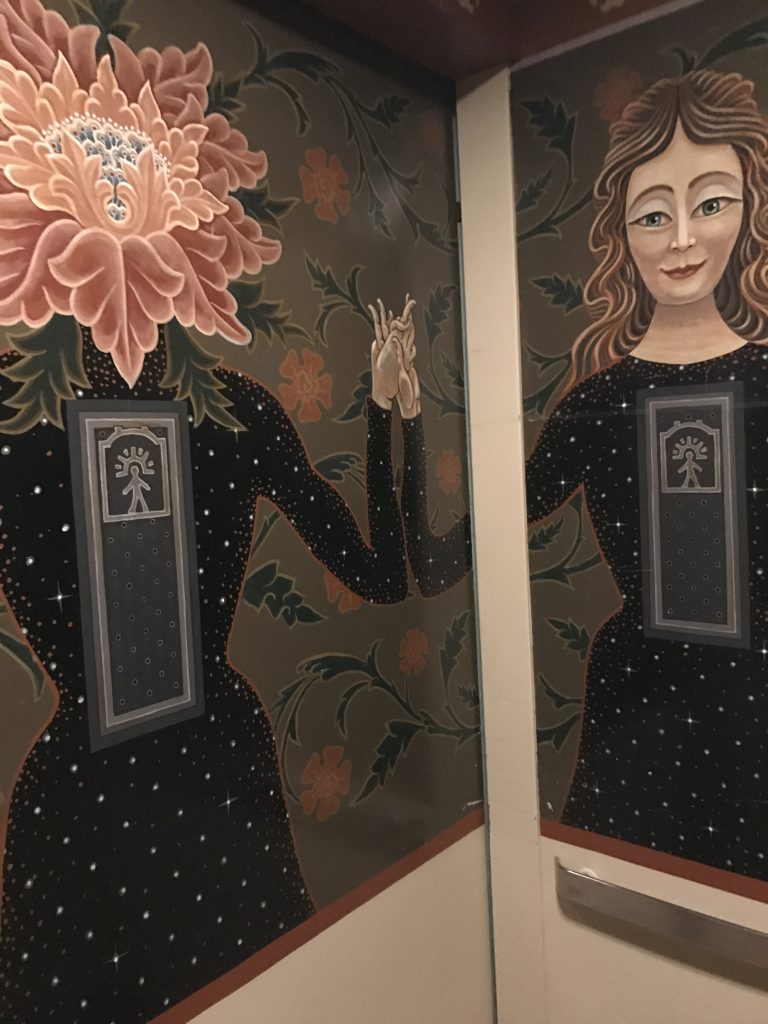 We walked around and checked things out. I bet the place is AMAZING in the summer! So many cool things to do–golf, spa, soaking pool, there’s live shows and concerts that sell out. There are several bars on site and several restaurants. There’s a brewery and winery. 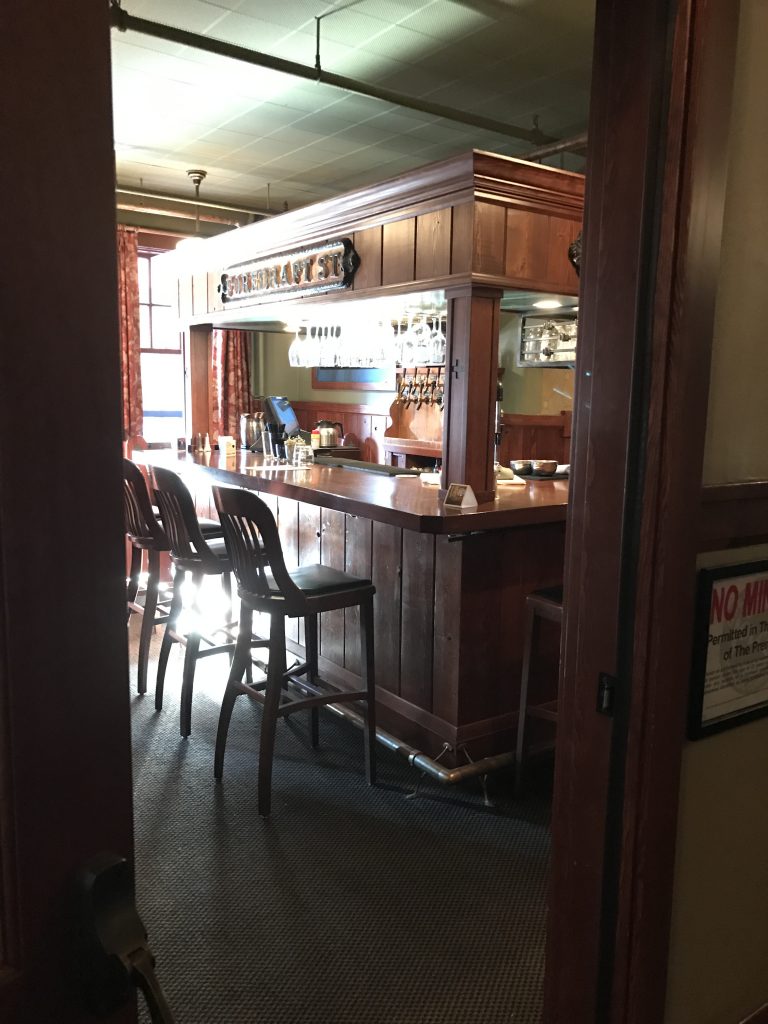 We checked out the soaking pool by the spa. We brought our swim suits and we were going to do it. They notified all the guests that the soaking pool was under temperature because of all the snow. We saw people in it and we were going to try it but decided not to. We’d have to trek through the snow and ice to get there from the hotel and Michael was fighting off a cold so it didn’t seem like the best idea. I was really disappointed!! But it was probably the best decision. The people we asked about the pool said it was too cold and they didn’t last in there long. But check out how cool it looks: 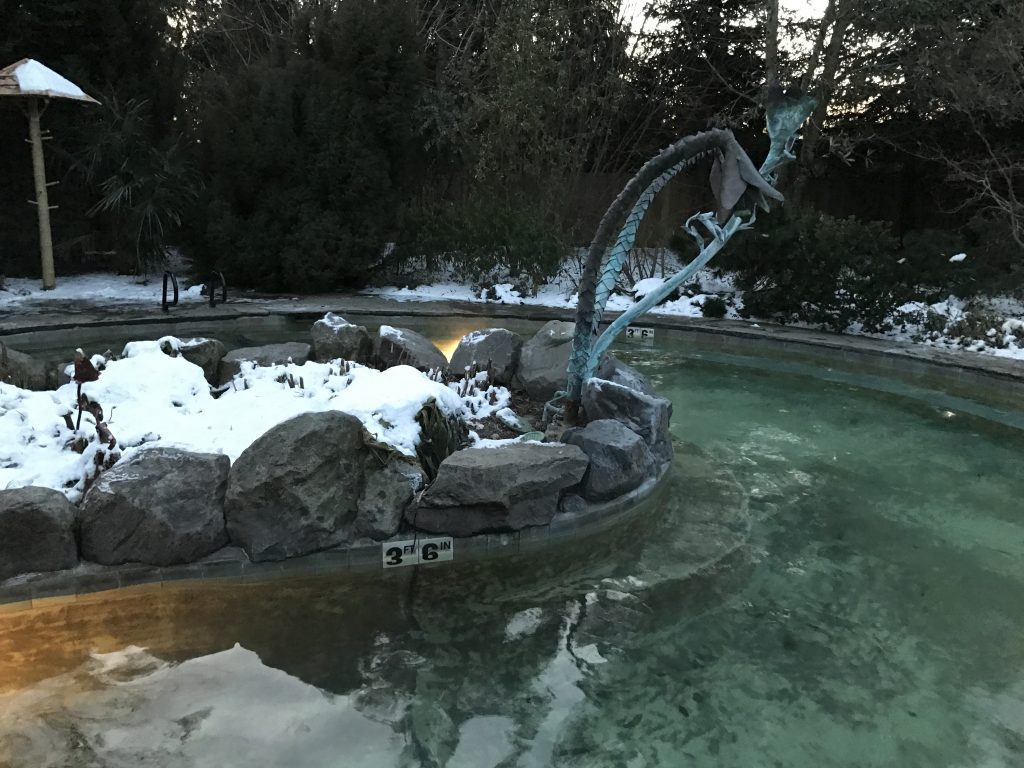 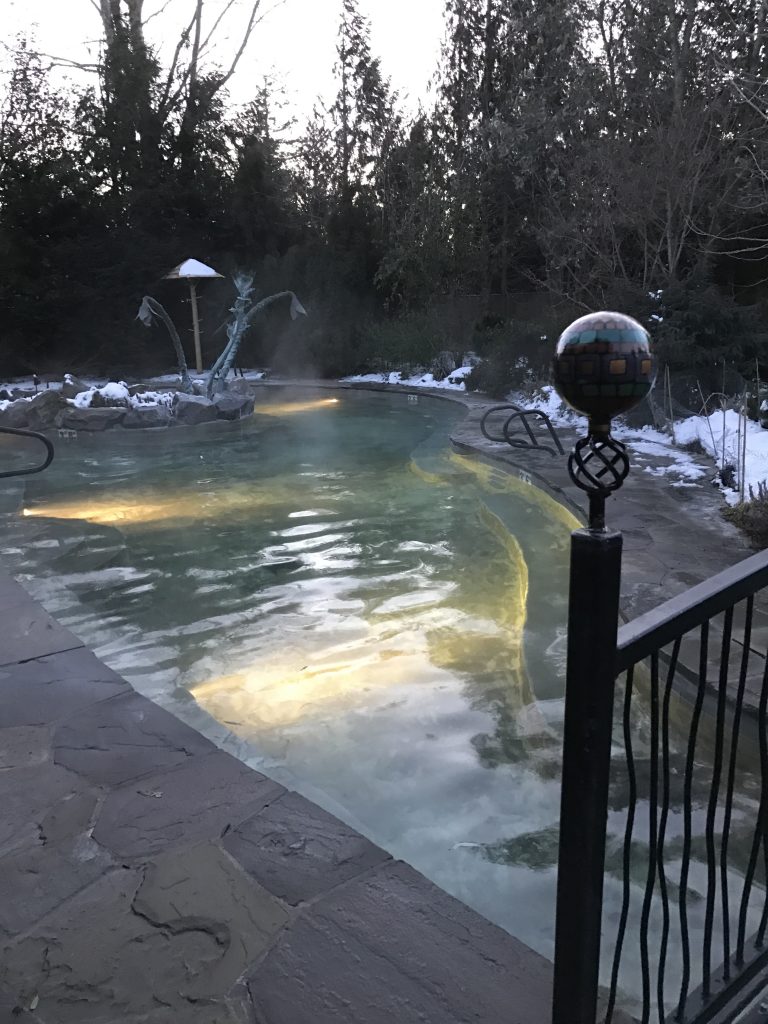 We are definitely going back just for the pool!

We did the winery package and that included breakfast. We went down to the basement where the winery was. It was packed! They also had live music. Our winery package included a tasting, a fruit and cheese plate and a free bottle of wine to take home. It was a lot of fun doing the tasting and I liked a lot of them.

The cheese was a warm, melted brie and it was all very good! We did the classic tasting, that was a few white and a few red. Then we decided to pay for the red only tasting because it had a lot of other red wines that sounded good. We ended up liking that tasting better and I loved about three of them. 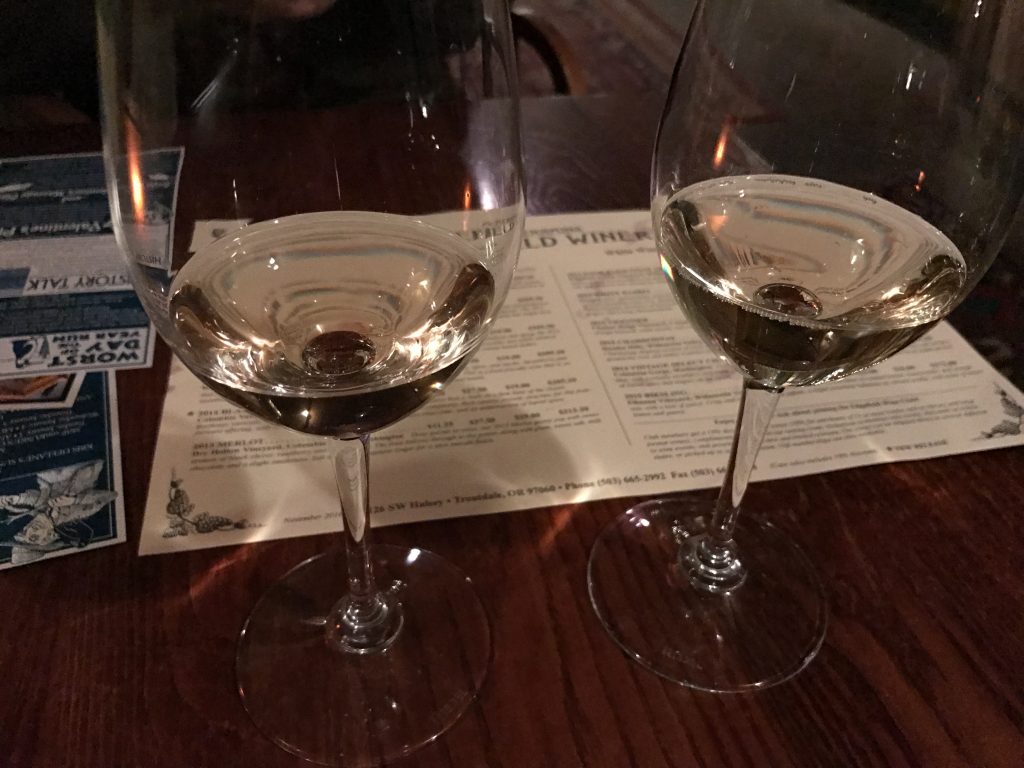 We enjoyed our tasting and hung out and ended up leaving with a delicious bottle of the 2014 Ferryman’s Choice Cabernet Franc. Can’t wait to open it!

After that we walked around a bit and then went to dinner at the Black Rabbit bar/restaurant. I was craving a burger so I got their burger and got the Brussels Sprouts instead of fries. The burger was really good and the sprouts were ok (Michael’s are better!). 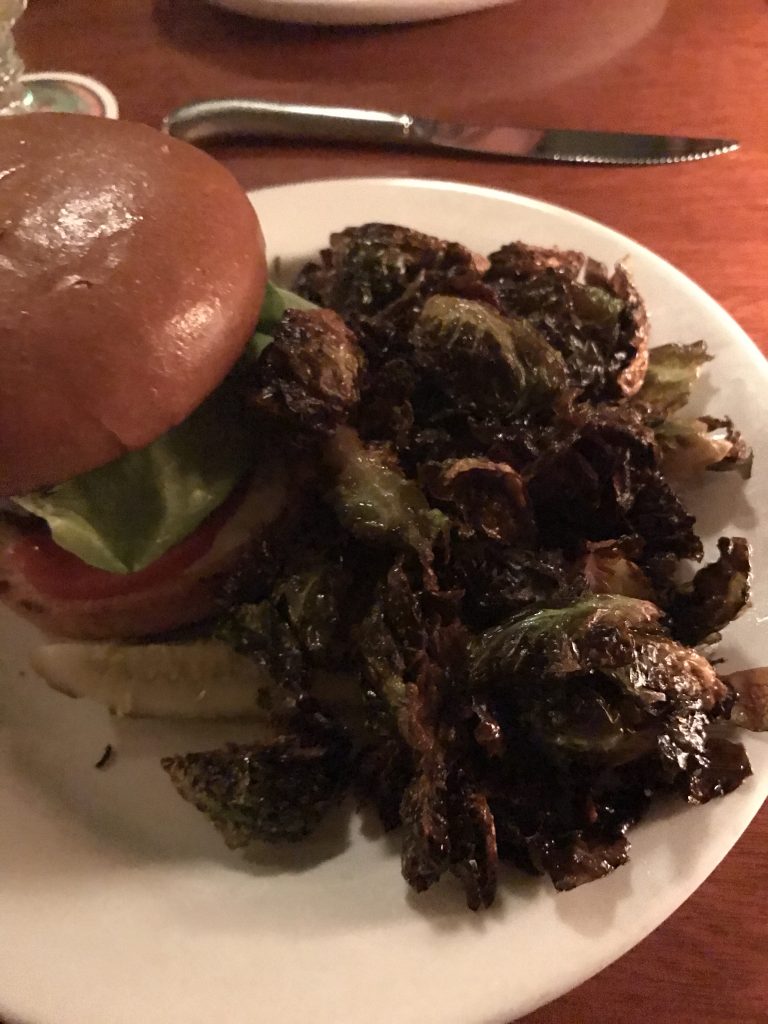 I had a glass of the Cuvee (it was my second choice wine during the tasting). Michael had a hot toddy with his dinner (the pork chops with mashed sweet potato puree). Michael said his dinner was outstanding.

Then it was time to call it a night. Our room was nice. You could hear the roaring wind outside. Michael said it sounded like the haunted mansion in Scooby Doo 🙂 and it kinda did! But it was cool to listen to the crazy, stormy weather. It was so nice to sleep uninterrupted and SLEEP IN until 9am!!! 😀

Then down to the Black Rabbit Restaurant for breakfast: 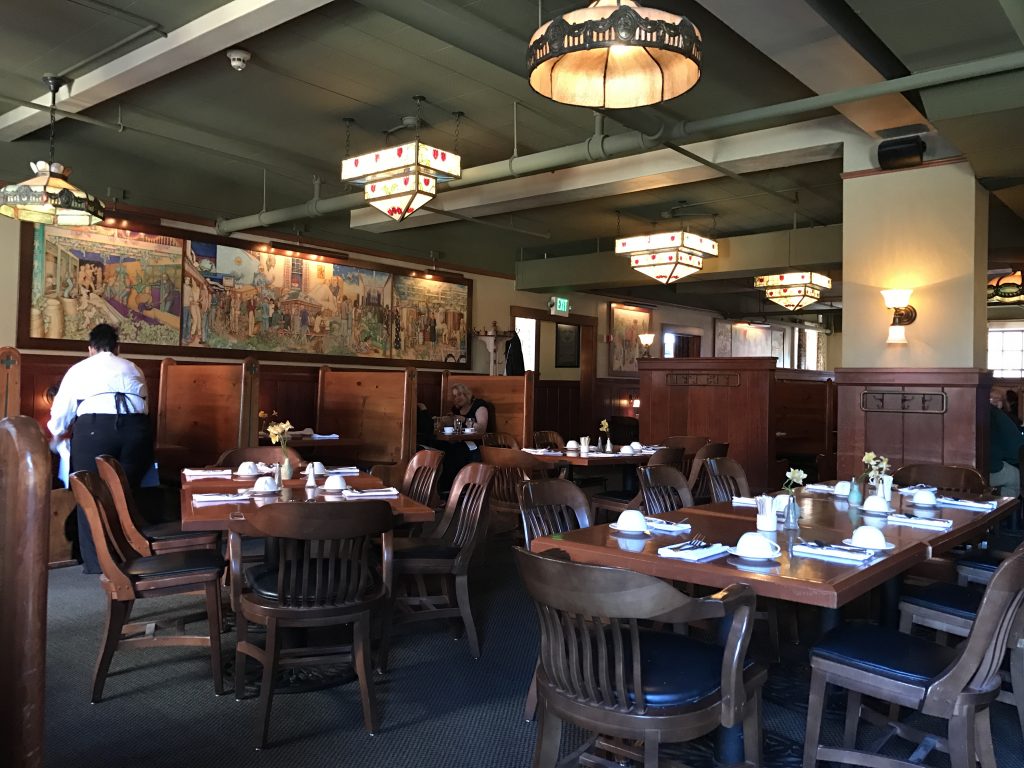 I got the French Toast made out of challah bread with a fruit compote and amaretto. 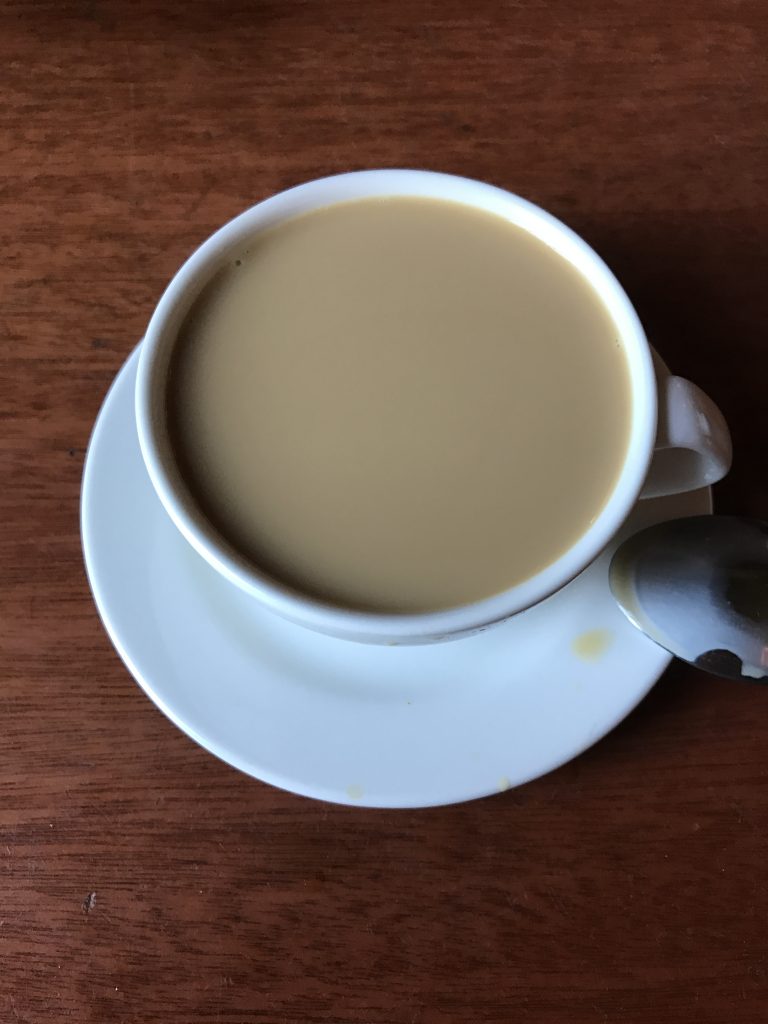 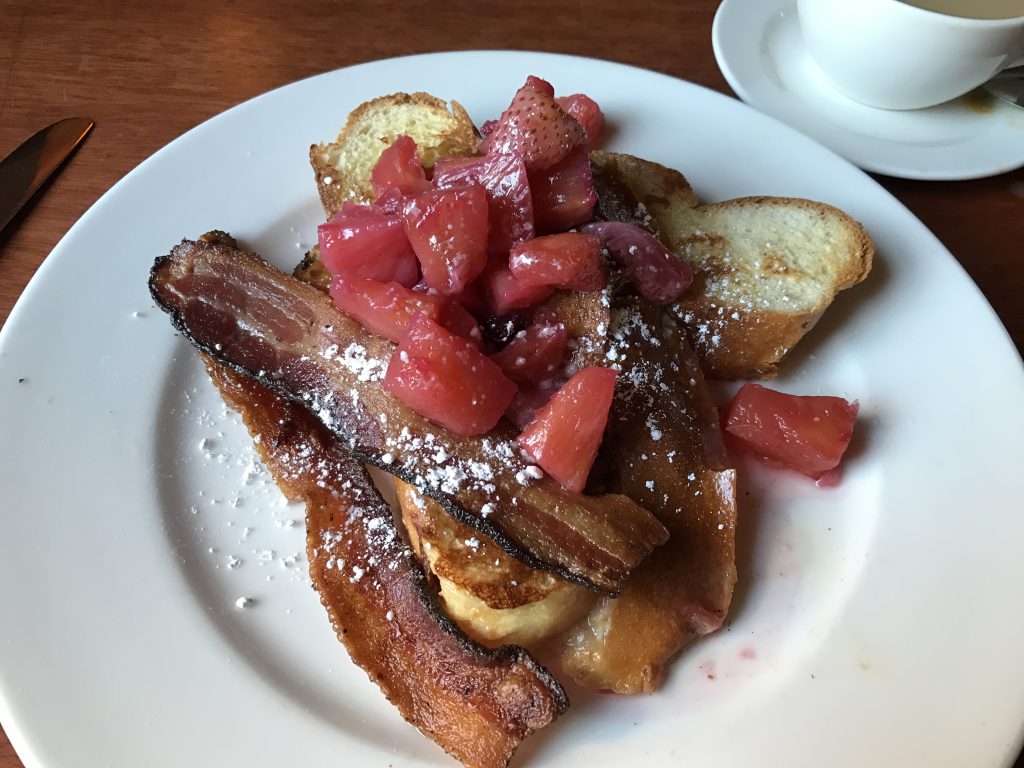 It also came with bacon. Michael got the special eggs benedict. It was avocado, tomato and egg and hollandaise. It looked amazing.

The food and service was great. We had a really nice, slow, low-key breakfast. Then we packed and checked out. We went to the nearby outlet mall and bought more clothes for Logan than ourselves 🙂 and made a few stops on the way home and then we were home to relieve my parents.

We spent some time with my parents and then they left to drive home to Seattle. I went to the gym and then played with Logan. I think he missed us. 🙂 We missed him but it was nice to get away for a short break and just be together the two of us. It’s nice that our family helps us have little dates here and there! 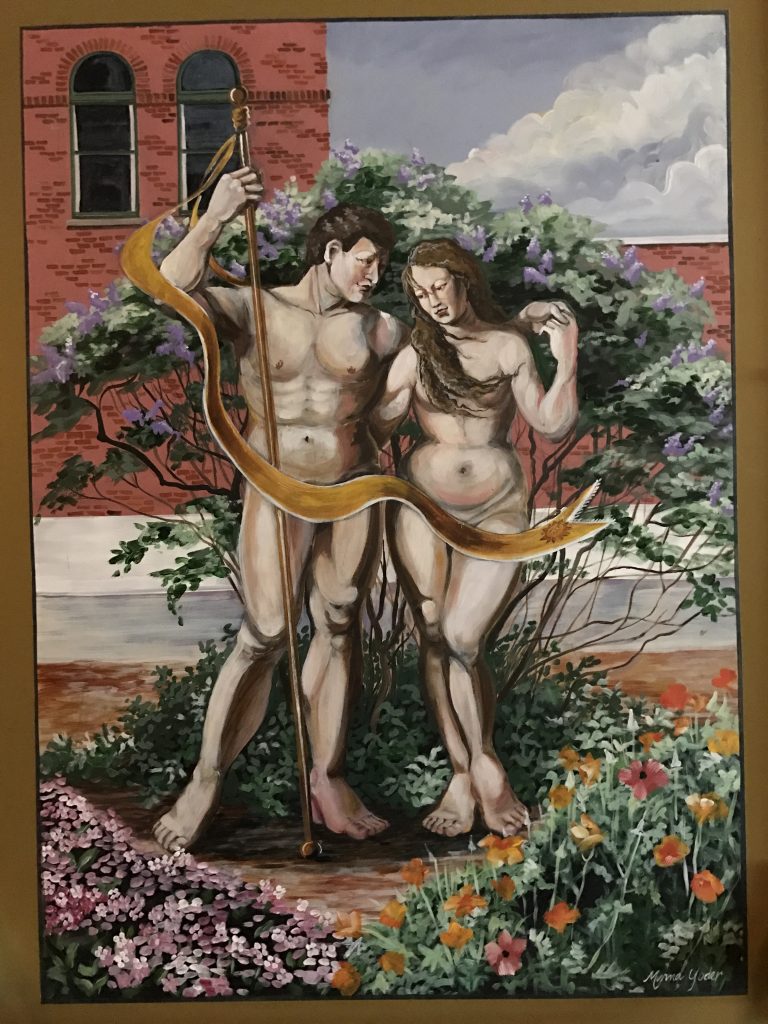